Medicaid is an important source of health insurance coverage for seniors and non-elderly people with disabilities who rely on the program for essential long-term services and supports (LTSS) to assist with activities of daily living and maintain their independence in the community.1 Historically, the program has had a bias toward funding institutional care, as nursing facility services are required to be offered by all states that choose to participate in Medicaid, while most home and community-based services (HCBS) are provided at state option.2 Over the last several decades, states have been working to rebalance their LTSS systems by devoting a greater percentage of spending to HCBS instead of institutional services. These efforts are driven by a number of factors, including beneficiary preferences for HCBS, the typically lower cost of HCBS relative to comparable institutional care, states’ community integration obligations under the Americans with Disabilities Act and the Supreme Court’s Olmstead decision,3 and the new and expanded initiatives to expand Medicaid HCBS available to states through the Affordable Care Act.4

While the majority of Medicaid LTSS dollars still go toward institutional services, the national share of Medicaid LTSS spending on HCBS has more than doubled from 20 percent in 1995 to 46 percent in 2013 (Figure 1). (Notably, these data do not include LTSS provided through Medicaid MLTSS § 1115 waivers.) The extent of rebalancing varies by state and by beneficiary population. For example, non-elderly people with disabilities currently are more likely to receive LTSS in a community-based setting, while seniors are more likely to receive LTSS in an institutional setting (Figure 2). 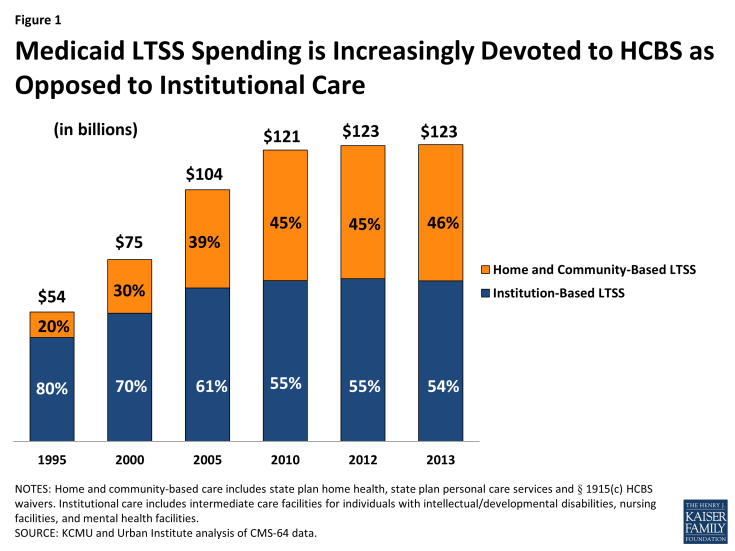 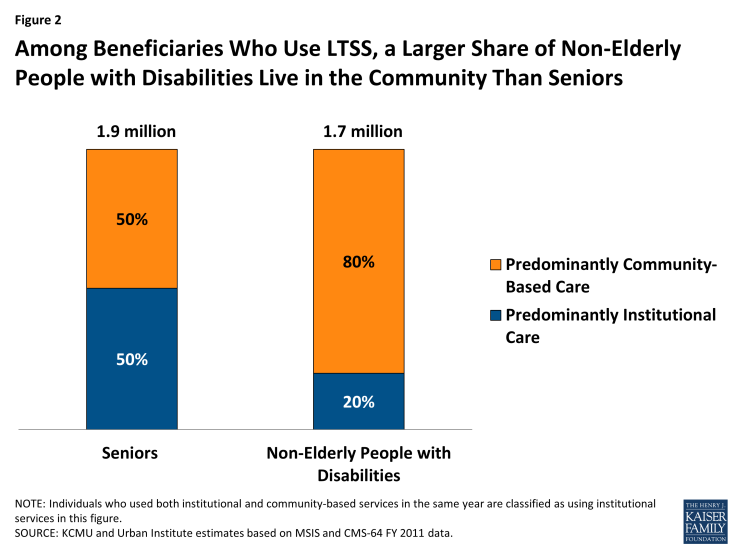 Figure 2: Among Beneficiaries Who Use LTSS, a Larger Share of Non-Elderly People with Disabilities Live in the Community Than Seniors

There is increasing state interest in LTSS delivery system reforms, including integrating LTSS with medical services and providing LTSS through managed care models, including capitated managed care organizations (MCOs). As of October 2014, 19 states had waivers under § 1115 or § 1915(b)/(c) for managed long-term services and supports (MLTSS) programs, most of which require beneficiaries to enroll in an MCO to receive services (Figure 3).5 Most of these waivers require MCOs to deliver a comprehensive set of benefits, including acute/primary care, behavioral health, nursing facility, and HCBS, and some operate with concurrent demonstration authority to integrate services and align financing for beneficiaries who are dually eligible for Medicare and Medicaid.6 Notably, there is variation among states in the amount of financial risk for nursing facility services embedded in the capitated rate paid to health plans. In addition to these waivers, other states are operating capitated MLTSS programs through § 1932 state plan authority or § 1915(a) waiver authority. 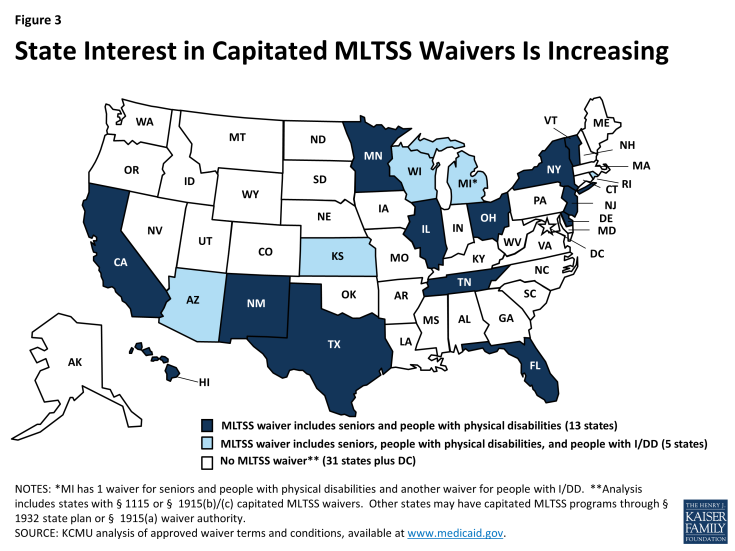 A significant number of states (13 in FY 2014 and 16 in FY 2015) report that incentives built into their MLTSS programs are expected to increase beneficiary access to HCBS.7 While some measures to assess state progress in LTSS rebalancing exist, this area remains a gap in evaluating HCBS quality and determining whether MLTSS programs are achieving their intended goals. To explore issues related to how rebalancing in capitated Medicaid MLTSS programs is measured, the Kaiser Commission on Medicaid and the Uninsured convened a roundtable meeting on November 13, 2014 with a group of federal and state officials and other experts, including researchers, representatives from health plans, and beneficiary advocates. This issue brief summarizes the key issues related to measuring performance in rebalancing identified and discussed by the invited participants. A companion fact sheet provides a brief overview of LTSS rebalancing measures.8