Medicaid payments to retail pharmacies for prescription drugs are determined by a complex set of policies developed at both the federal and state levels.  Reimbursement is a factor of ingredient cost, dispensing fees, and any cost sharing paid by the beneficiary. States set policies on dispensing fees and, within federal guidelines, beneficiary cost-sharing. With respect to ingredient costs, with the exception of some multiple-source drugs1 for which there are specific federal or state limits, federal regulations require Medicaid programs to reimburse pharmacies based on the lesser of the (1) estimated acquisition cost (EAC) plus a reasonable dispensing fee; or (2) the pharmacy’s “usual and customary charge” to the public. 2

EAC is intended to reflect the price that providers and retail pharmacies generally and currently pay to procure a particular drug from its supplier. Most states determine EAC using formulas that apply either a percentage reduction from the average wholesale price (AWP) for the drug or a percentage increase to the wholesale acquisition cost (WAC) for the drug. (See Figure 1).

AWPs and WACs are prices published in commercially available drug pricing compendia. Although its name suggests that it is the actual price that wholesalers charge for a drug, critics and experts alike have noted that AWP is more akin to the sticker price on a car: it represents a starting point for negotiations. It does not include any discounts or rebates that would typically be incorporated in the actual price that the wholesaler charges. It is not defined in federal regulations. Similarly, WAC is not based on actual sales data. However, unlike AWP, WAC is defined in federal regulations.3 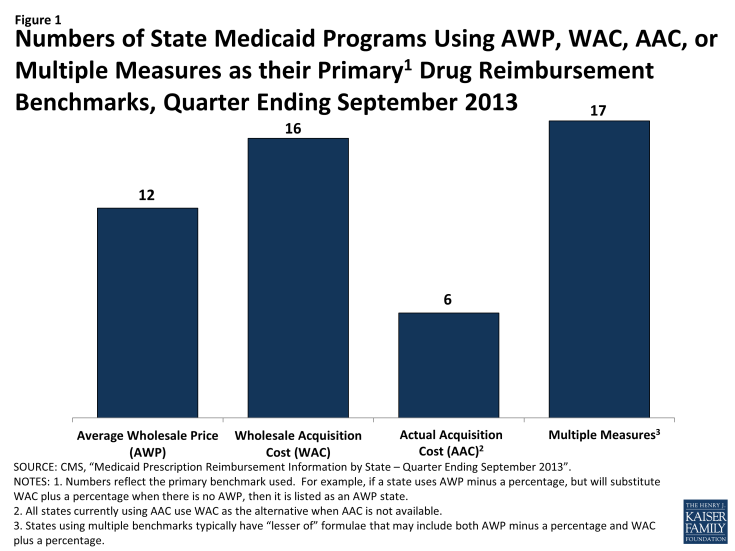 Multiple-source drugs are drugs that are available from more than one manufacturer. The Federal Upper Limit (FUL) program caps reimbursement for certain multiple-source drugs, with the intent of making the government a prudent buyer – and reducing Medicaid expenditures – by basing payments on market prices for these drugs. CMS calculates a FUL amount for specific forms and strengths for each multiple-source drug that meets the established criteria. The federal government establishes maximum payment amounts for about 700 multiple-source drugs, which include both generics and originator brands for which generic versions are available.  According to CMS, FUL drugs accounted for $2.4 billion in Medicaid expenditures in 2010,4 9% of Medicaid spending on prescription drugs. 5

Traditionally, the FUL for a multiple-source drug was set at 150% of the lowest price published in national drug pricing compendia. The Deficit Reduction Act (DRA) of 2005 included provisions to substantially reduce FULs, based in part on findings from a federal study that indicated that FULs based on published prices (AWP or WAC) were significantly higher than pharmacies’ acquisition costs.6 CMS did not implement these rules because of an injunction and subsequent changes to federal law. The Affordable Care Act and subsequent proposed rules limit reimbursement to no less than 175% of the weighted average of the most recently reported average manufacturer prices (AMP) for that drug. Federal law defines AMP as the average price paid to the manufacturer for the drug in the United States by (1) wholesalers for drugs distributed to retail community pharmacies and by (2) retail community pharmacies that purchase drugs directly from the manufacturer.7 CMS began publishing draft FULs based on these rules in September 2011 and continues to release updates for review and comment,8 but as of the date of this publication, FUL amounts continue to be based on published prices.

Nearly all states apply maximum allowable cost (state MAC, or SMAC) limits to multiple-source drugs, which establish ceilings on reimbursement for the drug products included on state MAC lists. These state MAC amounts generally are part of a complex “lesser of” formula, where the state agency sets reimbursement for multiple-source drugs at the lowest amount for each drug based on (1) the state’s EAC formula, (2) the FUL (if applicable), (3) the state MAC or (4) the pharmacy’s usual and customary charge to the public. State MAC programs frequently include other drugs that do not have established FULs: a 2013 analysis by the U.S. Department of Health and Human Services’ Office of Inspector General (OIG) found that state MAC programs include 50-60 percent more drugs than FULs. Of 41 states that identified a pricing benchmark for their state MAC programs, 29 used pharmacy acquisition costs as part of the benchmark to set state MAC prices.9

The dispensing fee is intended to cover reasonable costs associated with providing the drug to a Medicaid beneficiary, including the pharmacist’s services and overhead associated with maintaining the facility and equipment necessary to operate the pharmacy. States establish dispensing fees for the pharmacies that fill prescriptions for Medicaid beneficiaries. In late 2013, these fees range from $2 or less per prescription in Arizona, Connecticut, New Hampshire, Ohio, and Pennsylvania to more than $10 in Alabama, Alaska, Colorado, Idaho, Iowa, Louisiana, and Oregon; most other states pay dispensing fees that average around $5 or less per prescription.10 In setting their fees, states look to the fees paid by other state Medicaid programs, as well as fees paid in private insurance programs and Medicare Part D plans. Although exact pricing for most plans is proprietary information, surveys from groups such as the Pharmacy Benefit Management Institute and the Kaiser Family Foundation, and drug benefit trend reports from pharmacy benefit managers (PBMs) such as CVS/Caremark and Express Scripts, offer insight into typical benefit designs including general pricing trends and dispensing fees.11,12,13,14Variation in fees also reflect differences in states’ approaches to EAC: except for Alaska, the states with the highest fees also use AAC-based reimbursement.

A final component of Medicaid reimbursement for prescription drugs is cost sharing paid by the beneficiary. Medicaid has traditionally imposed limits on cost sharing. Until the enactment of the Deficit Reduction Act (DRA) of 2005, prescription drug copayments were limited to “nominal” levels, usually $3 per prescription except under Medicaid waiver, although some groups of enrollees, including children and pregnant women, could not be charged. In addition, under Medicaid policy, even if copayments were imposed and beneficiaries could not pay, pharmacies were supposed to dispense the drug anyway. The DRA modified these policies, allowing states to increase nominal cost-sharing levels based on the Consumer Price Index for Medical Care and permitting higher cost-sharing levels for beneficiaries with incomes over 100 percent of poverty as well as alternative cost-sharing policies. Today, almost all state Medicaid programs and Medicaid managed care plans charge nominal copayments for prescription drugs for adults, although they sometimes have variations in the copayment level based on whether a medication is generic or branded, or whether it is designated a “preferred” drug in the state’s Medicaid program.

In making decisions about imposing cost-sharing, states will need to weigh a large body of evidence about the effects of beneficiary cost sharing. A systematic review of cost sharing literature by Goldman et al. found that increases in cost sharing are associated with decreased use, poorer adherence, and more frequent discontinuation of prescription medicines.22 The literature also suggests that when higher cost sharing for prescription medications leads to reduced utilization and adherence, it can engender increases in other medical costs if patients become sicker as a result.23,24,25, 26,27