The U.S. Department of Health and Human Services’ Office of Inspector General (OIG) and the U.S. Government Accountability Office (GAO) have issued several studies that indicate how drug pricing benchmarks relate to each other and to measures of acquisition costs, FULs, and state MACs. These studies emphasize that relationships between list prices (AWPs and WACs) and average prices (AMPs) differ based on whether a drug is a single-source brand, multiple-source brand, or generic. They show AMPs were consistently less than AWPs and generic WACs, but AMPs were relatively close to brand WACs. They also show AMPs were close to single-source brand invoice prices, but the relationship was much more variable for multiple-source brands and generics without FULs. Additionally, they showed that AMP values vary considerably from month to month. See Appendix Table 1 for a more complete review of OIG, GAO, and other existing research on the comparison of drug pricing metrics.

Because the NADAC is a new measure, there is little current research on its relationship to other pricing metrics.  Our goal was to understand how the NADAC, an AAC measure, compares with the EAC measures and ultimately how they compare with the current amounts that Medicaid pays. To do this, we compared AWPs, WACs, NADACs, and amounts paid for different drugs.  We merged several sources of data at the National Drug Code (NDC)1 level. We grouped the NDCs by brand, generic, therapeutic class, and therapeutic subclass. Finally, we calculated the weighted averages of AWPs, WACs, NADACs, and amounts paid for the top 25 brand, top 25 generic, top 100 generic, and therapeutic class. The calculation of current payment levels takes into account each state’s EAC computations and the effects of FULs, state MACs and usual and customary charges.  Further details on our methodology are provided in the Methods section at the end of this report.

Figure 2 shows that among the top 25 single source brands and top 25 multiple source brands, the average NADAC ($8.03) is about 18 percent less than the average AWP ($9.78), but just slightly less than the average WAC ($8.14).  Average WACs and NADACs for brand drugs are less than the amount that Medicaid pays ($8.33).  However, it is important to note that the actual paid amounts include dispensing fees, and are reduced by patient cost sharing and amounts paid by third parties, which are not accounted for in the AWP, WAC, or NADAC. To get a sense for this, if we assume that the average prescription for the top 25 single source brand drugs used to compute the values shown in Figure 2 contains 35 units (based on calculations using our source data), that the average dispensing fee is $5 per prescription ($0.14 per unit), and that there are negligible amounts of third party payment and cost sharing (reasonable assumptions at the national level), then the weighted average total amount paid per unit absent these amounts would be about $8.19.  We then approximate that for the top 25 single-source brand drugs, NADACs are just slightly less than actual Medicaid payments for the drug ingredient cost. 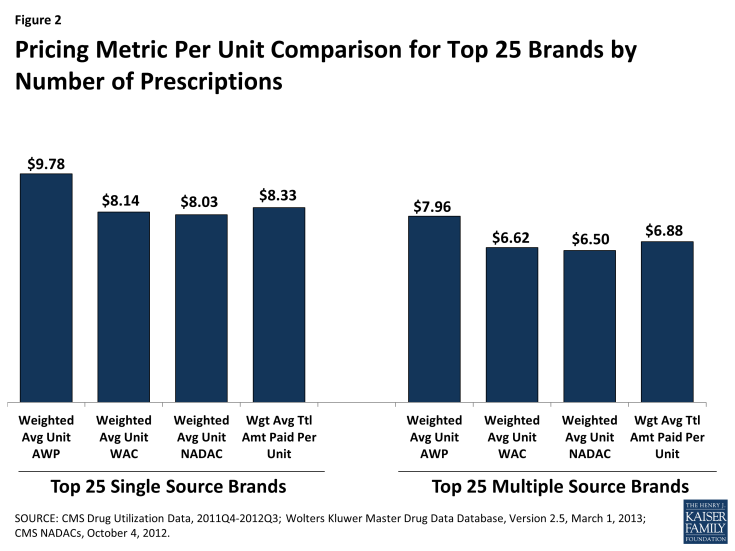 Table 1 shows the prescription-weighted, per-unit average AWP, WAC, NADAC and total amount paid for single source brand drugs grouped into therapeutic drug classes. Across therapeutic classes, NADAC is usually very close to WAC— 1 % to 2% higher or lower— although there are larger differences in a few classes. Table 1 also reaffirms that the acquisition costs are well below AWPs.

The analysis by therapeutic drug class also highlights the significant challenges in developing reimbursement formulas caused by great variation in drug prices. Any formula using a fixed percentage increase or decrease from a benchmark, such as AWP minus 16% or WAC plus 4%, results in markups (or markdowns) that vary in actual dollar amounts based on the price of the drug. The data in Table 1 illustrate this result: for example, the difference between the weighted average actual amount paid and the weighted average NADAC, per unit, is $0.20 for drugs the Cardiovascular Drugs class but $1.40 for the generally more expensive Anti-infective Agents class.

For generic drugs, the differences between the benchmarks and actual amounts paid become more exaggerated. Although there are AWPs for generic drugs, the values are high and generally not reflective of actual transaction prices. Due to substantial discounts from AWP, aggressive state MAC rates established by states to pay for generic drugs, and usual and customary amounts, generics are more likely to be reimbursed at rates far below AWP values. As with brand-name drugs, WAC values tend to be much closer to actual paid amounts and relatively close to NADAC values.

Because generic drugs have much lower per-unit prices, the dispensing fee is a more important factor in the difference between paid amounts and benchmarks. The average prescription for the top 25 generic drugs used to compute the values shown in Figure 3 contains 46 units. If one assumes an average dispensing fee of $5 per prescription ($0.11 per unit) and negligible amounts of third party payment and cost sharing, which again are reasonable assumptions at a national level, the weighted average total amount paid per unit absent these amounts would be about $0.24 per unit, which falls between the weighted average WAC ($0.39) and NADAC amounts ($0.14).

As with brand-name drugs, generic drug prices differ considerably. Table 2 illustrates the variation in average benchmarks and actual amounts paid for generic drugs, across drug classes. The lowest prices tend to be in classes with multiple older, established products that compete with each other for market share, while the higher prices tend to be in classes with greater concentrations of newer products or fewer competing therapies. Unlike with the brand drugs, NADACs vary in their relation to WACs by therapeutic class, ranging from 11% less than WAC for the eye, ear, nose, and throat preparations class to 73% less than WAC for the gastrointestinal drugs class. 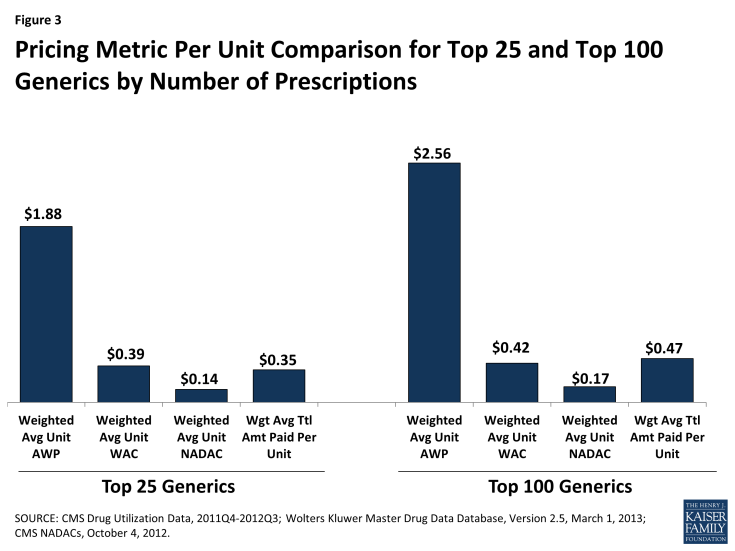