The rising number of people in the U.S. with coronavirus is having a widespread impact on the health and economic security of people of all ages, including older Americans. Adults ages 65 and older are not only at higher risk of serious illness if they get infected, but at risk of losing their retirement security. Nearly half of older Americans (48 percent) say they are worried that their investments will be negatively affected by coronavirus disease and the spillover effects of ongoing market volatility on their economic security.

The CARES Act aims to provide relief in the short-term by extending and enhancing unemployment benefits, and by providing up to $1,200 in payments to individuals, including Medicare beneficiaries who receive Social Security payments, but the longer-term impact on retirement income is unclear. Both provisions should help older adults who live on relatively modest incomes, including seniors who have continued to work to supplement their Social Security income. However, the volatility in the stock market could have a significant impact on the retirement savings that older adults accumulate over the course of their lives to cover big expenses, including out-of-pocket health costs, especially the cost of long-term care.

This analysis looks at the income, assets and home equity of Medicare beneficiaries prior to coronavirus outbreak, using data from the Dynamic Simulation of Income Model (DYNASIM) for 2019 (See Methodology for details). We look at the overall population and variations by age, gender, and race/ethnicity. Because the analysis is based on information available prior to the pandemic, the estimates do not reflect the impact that the coronavirus economy has had, or will have, on Medicare beneficiaries’ income and savings.

Even before the effects of the coronavirus pandemic are fully realized, our analysis finds many Medicare beneficiaries lived on limited incomes and modest, if any, savings, with wide disparities by age, gender and race/ethnicity. 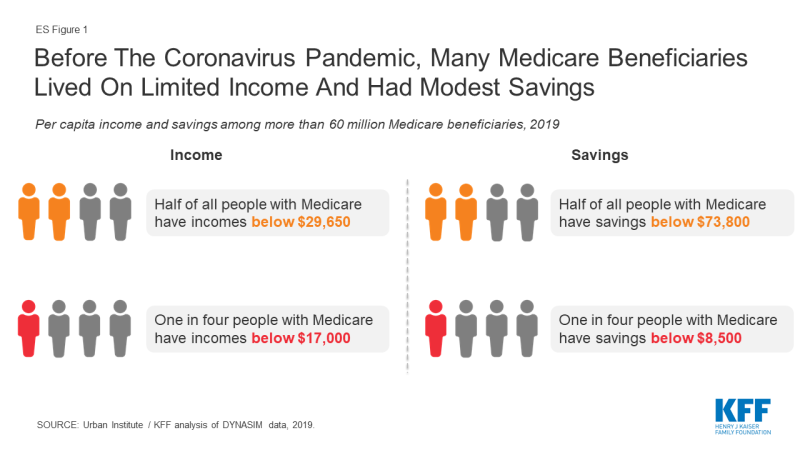 Figure ES-1: Before The Coronavirus Pandemic, Many Medicare Beneficiaries Lived On Limited Income And Had Modest Savings

In this analysis, the income of the Medicare population takes into account Social Security, pensions, earnings, and other income sources, including income from assets (e.g., stocks and bonds), rental income, and retirement account (IRA) withdrawals. Income is presented on a per person basis; for married people, income is divided equally between spouses to calculate per capita income. All dollar amounts are in 2019 per capita dollars. 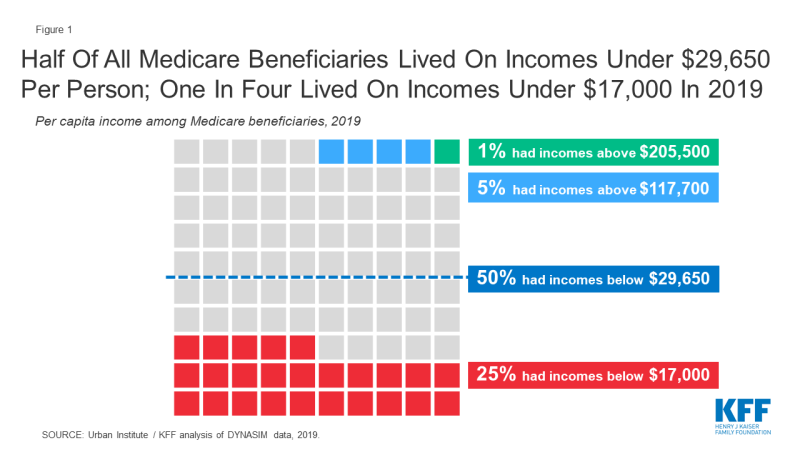 Per person estimates of income among beneficiaries vary dramatically by age, race/ethnicity and gender (Figure 2 and Table 1): 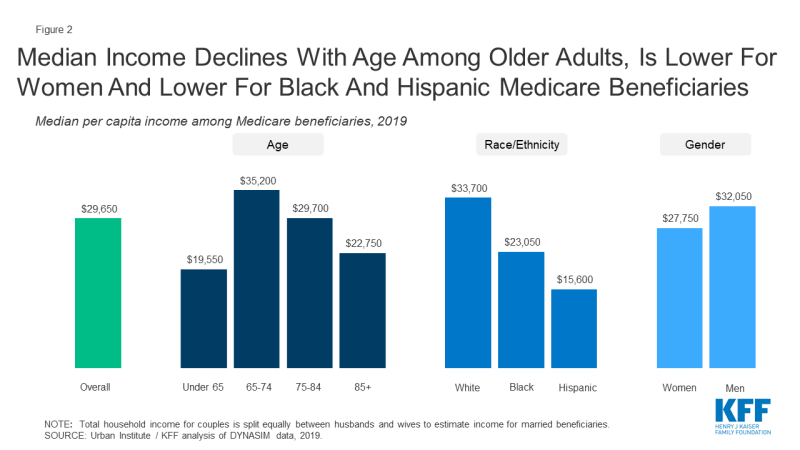 Figure 2: Median Income Declines With Age Among Older Adults, Is Lower For Women And Lower For Black And Hispanic Medicare Beneficiaries

In addition to income, we examine the total savings for Medicare beneficiaries. Savings include retirement account holdings (such as IRAs or 401Ks) and other financial assets, including savings accounts, bonds and stocks. Savings are presented on a per person basis; for married people, savings are divided equally between spouses to calculate per capita savings.

The majority of Medicare beneficiaries (88%) had some savings in 2019; however, the value of their savings varied widely. 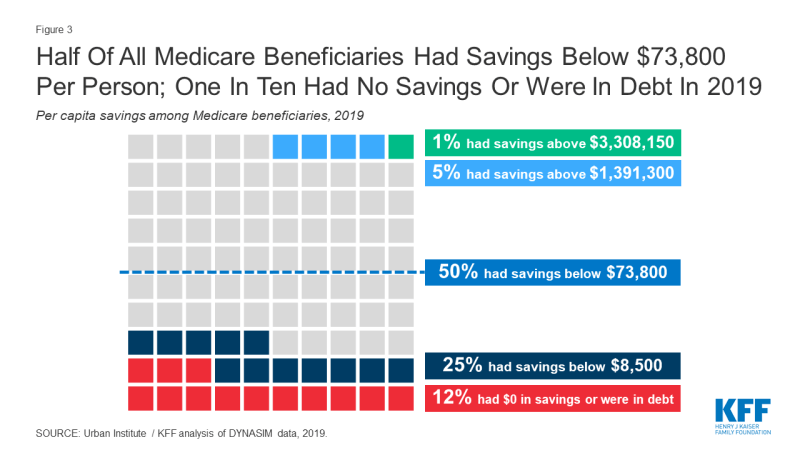 Figure 3: Half Of All Medicare Beneficiaries Had Savings Below $73,800 Per Person; One In Ten Had No Savings Or Were In Debt In 2019

Among Medicare beneficiaries ages 65 and older, half had savings below $83,850 per person in 2019, a quarter of all older adults with Medicare had savings below $9,650 per person in 2019, and 12 percent had no savings at all (Table 1; Table 2). The average household ages 65 and older with any savings invested about one fifth (18%, on average) of their total savings in the stock market in 2016; the share was lower among older households with savings in the bottom savings quintile (<1%, on average) but much higher (36 percent, on average) among older households in the top savings quintile. The volatility in the stock market raises particular concern for the financial security of seniors who have fewer years than younger adults to recover lost savings from a downturn in the economy (Table 3).

Median per capita savings among Medicare beneficiaries varies across demographics (Figure 4 and Table 1): 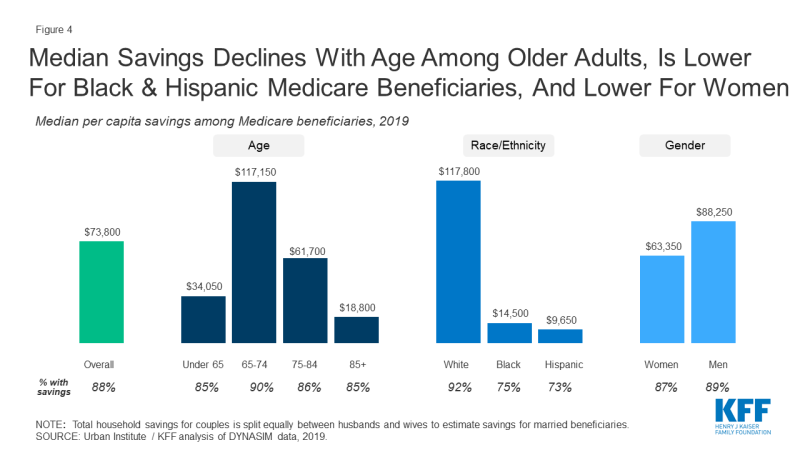 Figure 4: Median Savings Declines With Age Among Older Adults, Is Lower For Black & Hispanic Medicare Beneficiaries, And Lower For Women

As with income and savings, this analysis divides home equity values equally between spouses to calculate per capita home equity. The estimates account for any decrease in home equity values that occurred as a result of the mortgage crisis; it has been estimated that more than 1.5 million Americans over age 50 lost their homes between 2007 and 2011. 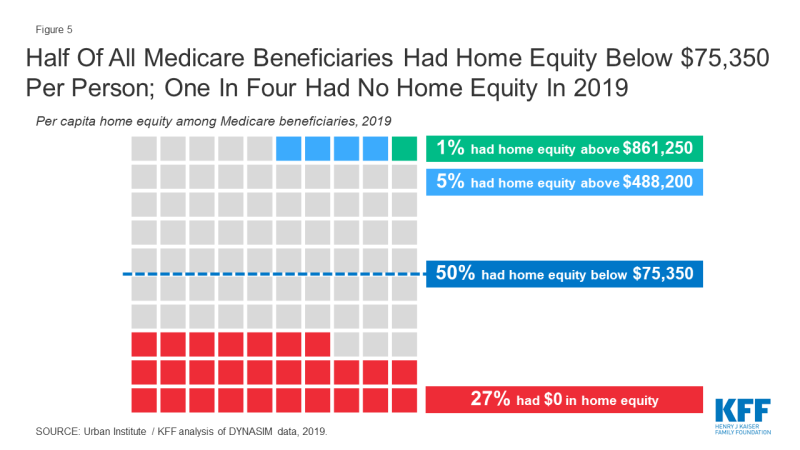 Figure 5: Half Of All Medicare Beneficiaries Had Home Equity Below $75,350 Per Person; One In Four Had No Home Equity In 2019 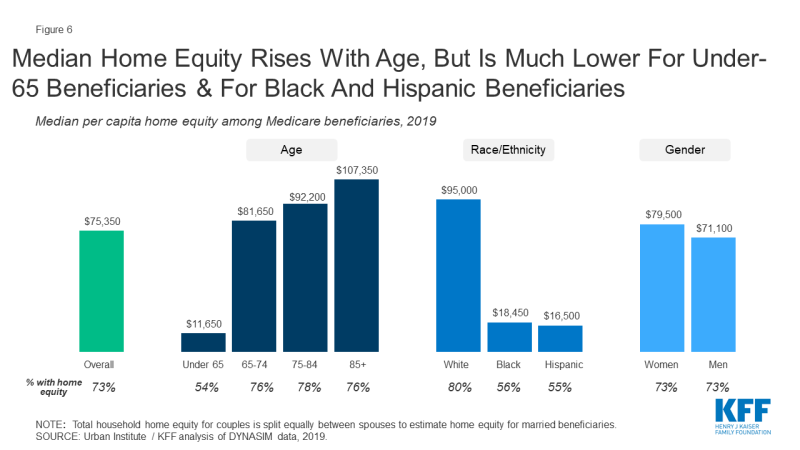 Figure 6: Median Home Equity Rises With Age, But Is Much Lower For Under-65 Beneficiaries & For Black And Hispanic Beneficiaries

In 2019, prior to the coronavirus pandemic and its impact on the economy, the majority of Medicare beneficiaries lived on limited incomes and modest savings, with limited cushion to absorb unanticipated health expenses, and significant disparities by age, gender, and race/ethnicity. Our analysis raises questions about the extent to which Medicare beneficiaries will be able to bear additional, unanticipated costs that are likely to arise from the coronavirus pandemic, given the likely prospect of declining retirement resources. It also highlights the wide variation in Medicare beneficiaries’ financial resources, which is important context for near-term policies pertaining to the costs associated with COVID-19 treatment, and longer-term policies pertaining to Medicare reforms.

Wyatt Koma and Tricia Neuman are with KFF. Karen Smith is with the Urban Institute. Gretchen Jacobson was with KFF at the time this brief was written.

Asset and income projections are based on the Urban Institute’s Dynamic Simulation of Income Model (DYNASIM4). DYNASIM4 is a dynamic microsimulation model that projects the population and analyzes the long-run distributional consequences of retirement and aging issues. The model starts with a representative sample of individuals and families and ages the data year by year, simulating demographic and economic events including all key components of retirement income. The model integrates many important trends and differences among groups in life course processes, including birth, death, schooling, leaving home, first marriage, remarriage, divorce, disability, work, retirement, and earnings. Projections of fertility, disability, mortality, net immigration, employment, average earnings, and price changes are aligned to be consistent with 2019 OASDI Trustees intermediate cost projections. Projections of assets are aligned to the Health and Retirement Survey (HRS) for people ages 50 and older, and the Survey of Consumer Finances (SCF) for people under age 50. This brief uses data from DYNASIM4; many significant changes were made to the microsimulation model, and the findings therefore cannot be trended from previous analyses, which used DYNASIM3 (See below for more information).

Comparison of Current Data to Past Data

DYNASIM4 is an update to its predecessor, DYNASIM3. It includes a more recent starting sample, updated demographic and labor market modules, and revised asset alignment targets. DYNASIM4 starts with pooled 2004 and 2008 SIPP data and projects data from 2007 to 2093. DYNASIM3 started with pooled 1990 to 1993 SIPP data and projected data from 1993 to 2087. Compared to DYNASIM3, DYNASIM4 updated the demographic projections to add cohabitation and same-sex marriage, and updated education and labor market modules using more recent data. The SIPP data significantly underreports financial and retirement account assets (Czajka, Jacobson, Cody 2003; Smith et al 2005; Smith et al 2010). Both DYNASIM3 and DYNASIM4 adjusted SIPP self-reported assets. DYNASIM3 aligned SIPP asset distributions to the 1992 Survey of Consumer Finances (SCF) data. DYNASIM4 aligns SIPP asset distributions to the 2006 Health and Retirement Study (HRS) (age 50 and older) and 2007 SCF (under age 50) data. DYNASIM projects changes in assets after age 50, so its projections are sensitive to the adjusted SIPP starting values. The HRS asset distributions are typically lower than the SCF asset distributions, but the HRS has a significantly larger sample size for older households than the SCF. The HRS also includes older individuals living in institutions and with non-spouse family members who are not included in the SCF; these individuals tend to have lower incomes and assets than other people on Medicare.