The Trump Administration has issued guidance permitting state Medicaid programs to apply for waivers to institute work requirements as a condition of Medicaid eligibility, a departure from the program’s history. To date, 20 states have sought approval for such waivers, which remain controversial and face challenges in court.1  (For up to date information on state status of Medicaid work requirement waivers, see the Kaiser Medicaid Waiver Tracker.)

A separate KFF analysis of data on the general Medicaid population found that most (63%) non-dual, non-SSI, non-elderly Medicaid beneficiaries were already working and many others faced barriers to work that could make them exempt from the requirements.2 Additionally, large numbers of beneficiaries could face difficulties demonstrating that they were in compliance with or exempt from work requirements and as a result could lose coverage. For example, early state experience with work requirements has resulted in significant disenrollment from the state program, including among those who failed to demonstrate that they qualified for an exemption or were already fulfilling the requirement.3,4 In this data note, we assess the potential implications of work requirements for people with HIV, a population that relies heavily on Medicaid and for whom there are particularly important clinical and public health reasons for maintaining consistent access to insurance coverage and HIV care.

Medicaid is the largest source of insurance coverage for non-elderly adults with HIV, covering an estimated 42% of this group, about three times the rate of the adult population overall.5  The number of Medicaid beneficiaries with HIV has grown over time as people with HIV are living longer, new infections continue to occur, and as the program has expanded.6 Medicaid covers a broad range of services, many of which are important for people with and at risk for HIV, including prescription drugs, inpatient and outpatient care, and preventive services. Sustained engagement in care and treatment significantly reduces morbidity and mortality for people with HIV.7 Additionally, when someone with HIV has an undetectable viral load, typically achieved through antiretroviral treatment, HIV cannot be transmitted to others.8 As such, ensuring that people with HIV remain on coverage and engaged in care and treatment has critical clinical individual and public health benefits.

We analyzed data from the Centers for Disease Control and Prevention’s Medical Monitoring Project (MMP), a national surveillance system which reports representative estimates of characteristics among adults with diagnosed HIV. We assessed working status and other characteristics of those covered by Medicaid among adults with diagnosed HIV during the 2017 MMP data cycle, the most recent data available. We excluded beneficiaries receiving SSI (i.e., those who qualify for Medicaid through a disability pathway), those over age 65, and those dually eligible for Medicaid and Medicare as these populations are not included in work requirements under federal guidance.

Overall, we found that 44% of non-SSI, non-dual, nonelderly Medicaid adults with HIV are already working full or part-time.9 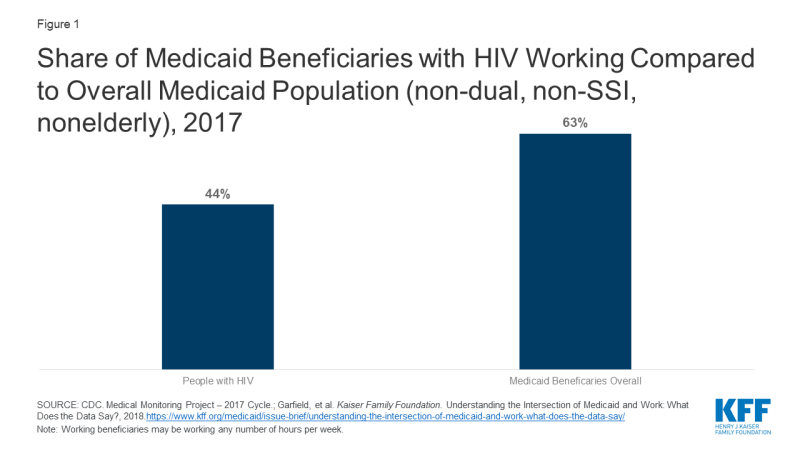 Most state waivers require individuals to work at least 80 hours per month (or 20 hours per week) to satisfy the work requirement.10  Using these criteria, we found that one-third (33%) of non-dual, non-SSI, nonelderly Medicaid beneficiaries with HIV were working at least 20 hours a week, thus likely meeting the work requirement. In addition, beneficiaries with a disability (beyond those already excluded due to SSI eligibility), those with care-giving responsibilities, and students have also been exempt from work requirements under most state waivers. Using these criteria, we found that another half (50%) of Medicaid beneficiaries with HIV would likely qualify for an exemption on the basis of disability, which we defined as having either a functional disability (e.g. difficulty climbing stairs, dressing oneself, etc.) or an AIDS (stage III HIV) diagnosis. Smaller shares would likely qualify for exemptions due care-giving responsibilities (4%) (defined as having a dependent under 18 in the home) or being a student (1%). This leaves 13% who could be targeted by Medicaid work requirement policies, if implemented nationwide and not otherwise exempt. 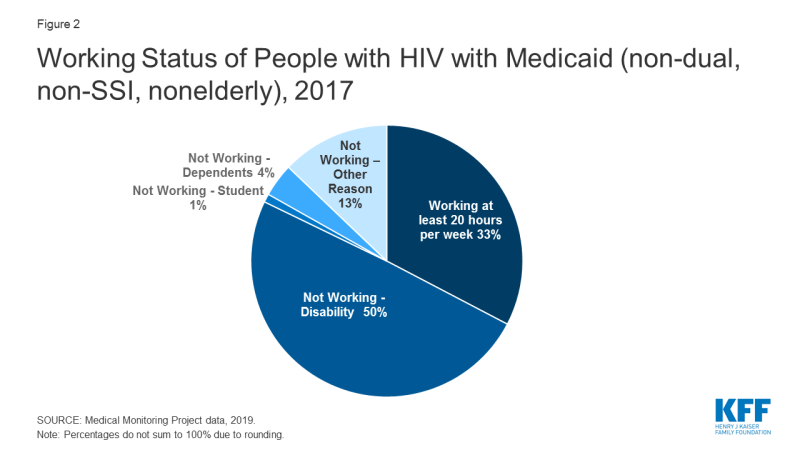 While most non-SSI non-dual adults nonelderly Medicaid beneficiaries with HIV would likely already meet work requirements or could qualify for an exemption because they face barriers to work, we find an estimated 13% could be targeted by such requirements, if rolled out nationwide (unless states add other protections for individuals with HIV, as some have done). To the extent that beneficiaries with HIV experience challenges in obtaining work, they could face disenrollment and, therefore, lose coverage.  In addition, as studies have shown, the 87% of individuals who might already meet the requirement or could qualify for an exemption may find it difficult to document their compliance or verify their exempt status, which would also jeopardize their access to continuous coverage.11,12  While such challenges could affect Medicaid beneficiaries more generally, there are particular concerns in the case of a life threatening infectious disease such as HIV, where coverage interruptions and lapses could result in adverse health outcomes and increased HIV infections. Recognizing these challenges and their potential implications, three states (as of November 2019) have included specific exemptions for people with HIV under their definition of “medical fragility,” another required exemption category.13 However, most states have not done so and beneficiaries could still need to apply for and secure an exemption.

The future landscape in this area is uncertain. Currently, only one state (Michigan) is implementing its approved work requirement program while others have delayed implementation due to pending litigation. However, 10 states still have waivers pending. If additional states move ahead with implementation and more states receive approval from the federal government, it will be important to monitor how specific policies impact access to care and coverage for people with and at risk for HIV.

This analysis relies on data from the Medical Monitoring Project (MMP), a CDC surveillance system designed to produce nationally representative estimates of behavioral and clinical characteristics of adults (aged 18 and older) with diagnosed HIV in the United States. During 2017–2018, MMP employed a two-stage, complex sampling design. In the first stage, 16 states in the U.S. and Puerto Rico were sampled. During the second stage, simple random samples of adults (aged 18 years and older) with diagnosed HIV were sampled from the National HIV Surveillance System (NHSS), a census of US persons with diagnosed HIV.

Data used in this analysis were collected by the CDC via telephone or face-to-face interviews and medical record abstractions between June 1, 2017 and May 31, 2018. All sampled areas participated in MMP.3

In 2017, of 9,700 sampled persons, 4,222 participated. The overall adjusted response rate was 46%.  Data were weighted based on known probabilities of selection at state or territory and participant levels. In addition, data were weighted to adjust for non-response using predictors of person-level response. Although characteristics associated with nonresponse varied among states and territories, the weighting classes for the national data were informed by sex at birth, MSM HIV exposure category, and the person’s frequency of receipt of care (as indicated by NHSS records). This analysis includes information on 820 participants who represent all non-elderly adults with diagnosed HIV and Medicaid coverage but without SSI or Medicare coverage in the United States and Puerto Rico. All data within this brief were self-reported.