Medicaid HCBS Participants and Expenditures in 2012 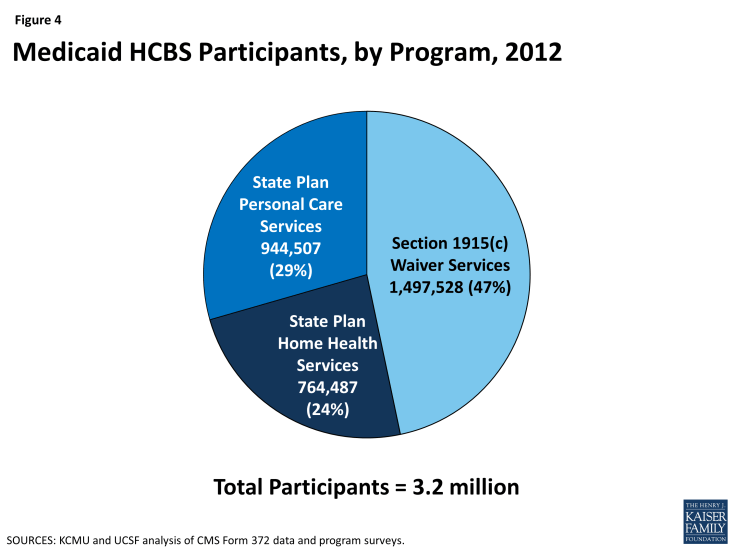 Participation in the three main HCBS programs declined by less than one percent between 2011 and 2012, the first annual decline since 2006, following two years of slight growth. This was also well below the 10-year average growth rate of three percent (Table 1A and Figure 5). 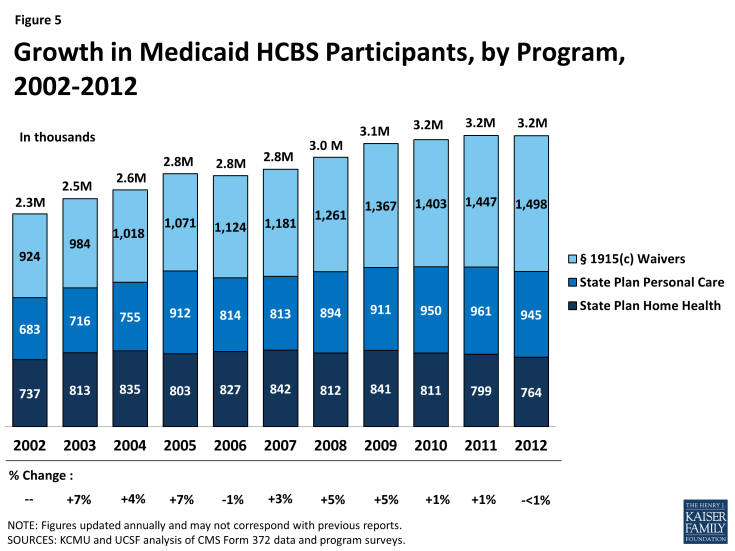 Leading the 13 states with a decline in total HCBS enrollment between 2011 and 2012 was Texas, with a 17 percent decline reported. Louisiana recorded the second largest decline with a 9 percent drop in total HCBS enrollment between 2011 and 2012 (Table 1A). Both Texas and Louisiana’s declines in total HCBS enrollment were led by a drop in their § 1915(c) waiver enrollment as the number of waivers declined in both states. Three waivers in Texas were terminated (one for people with I/DD and 2 for the aged/disabled population), while another was converted to a § 1115 Managed Care waiver in 2012.  Louisiana terminated one large aged and disabled waiver. On the other hand, Idaho, Minnesota, and Maine saw the largest increases (27%, 15%, and 14%, respectively) in total HCBS participants in 2012. Idaho’s participant growth was driven by large increases in its two state plan programs while both Minnesota and Maine experienced relatively high participant growth in their home health programs.

The decline in total HCBS enrollment in 2012 was led by declines in participation in both the home health state plan program (-4%) and in the personal care state plan services program (-2%) (Tables 1B and 1C). Nebraska led the decline in home health program enrollment with a 27 percent drop, due to a change in reporting when the state moved to managed care, while Maine led the decline in personal care state plan participation with a 33 percent drop in 2012, also due to a change in reporting. Nationally, § 1915(c) waiver program participation increased by three percent from 2011 to 2012, and seven states reported declines in participation led by Louisiana (-24%) and Texas (-19%) as noted above (Table 1D). Figure 6 illustrates the variation in total Medicaid HCBS program participation among the states. 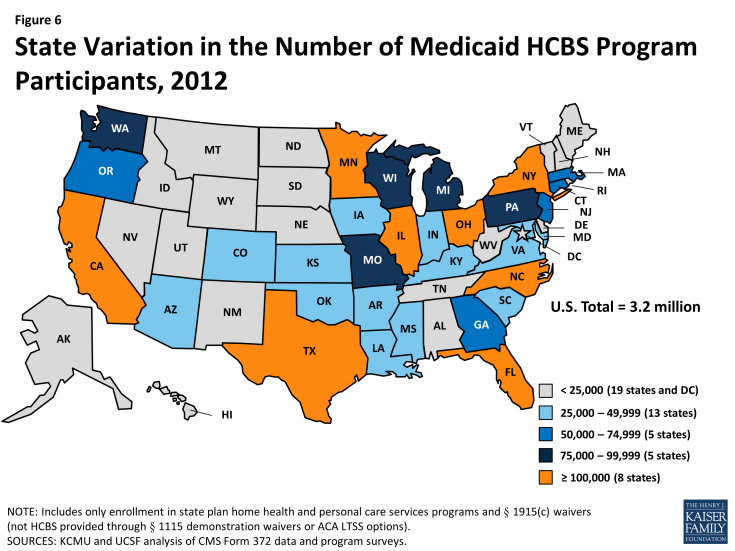 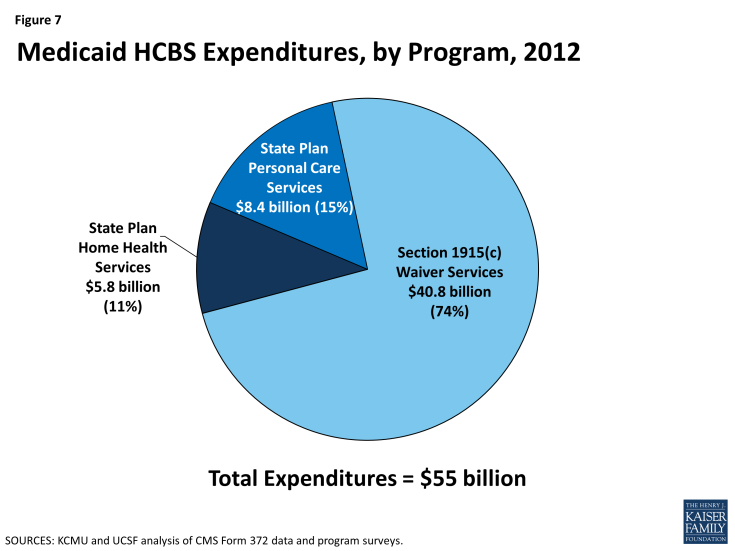 Between 2002 and 2012, total annual Medicaid spending on HCBS in the three main programs increased by almost $30 billion (119%) with an average annual increase of eight percent (Figure 8). HCBS spending recorded slight growth between 2011 and 2012, the lowest rate of growth within the 14-year study period. However, this low rate of growth in HCBS spending was still more than the decline of four percent recorded for total Medicaid acute and LTSS expenditures in the same period, which corresponded with a decline in total Medicaid spending growth.1 Amid the stagnant growth in HCBS expenditures, 11 states reported a decline in total Medicaid HCBS expenditures between 2011 and 2012. Declines were led by Texas and Wyoming (both -21%) (Table 2A). 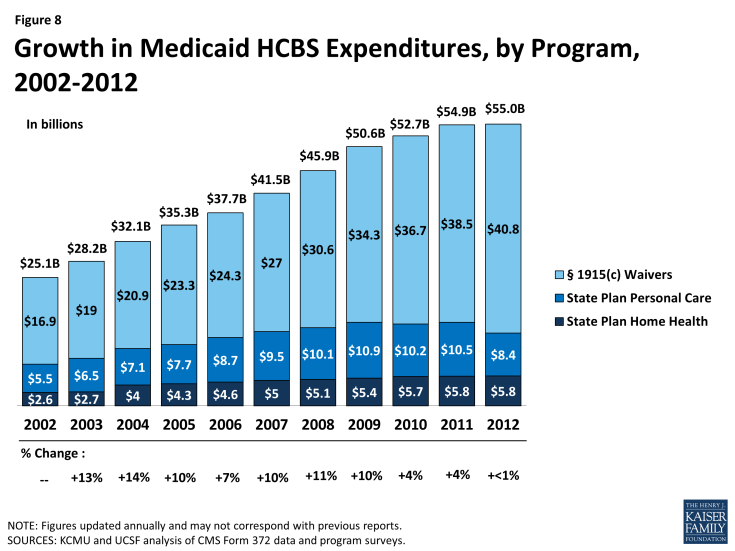 However, Medicaid HCBS expenditures as a proportion of total Medicaid LTSS expenditures continued to increase between 2011 and 2012 as they have done every year since 1995.2

National total Medicaid HCBS expenditure data mask state-to-state variations in spending across the three major programs. First, while national per participant spending on Medicaid HCBS averaged $17,151 in 2012, state spending ranged from $8,787 in Mississippi to $42,556 in Tennessee (Figure 9, Table 3A). 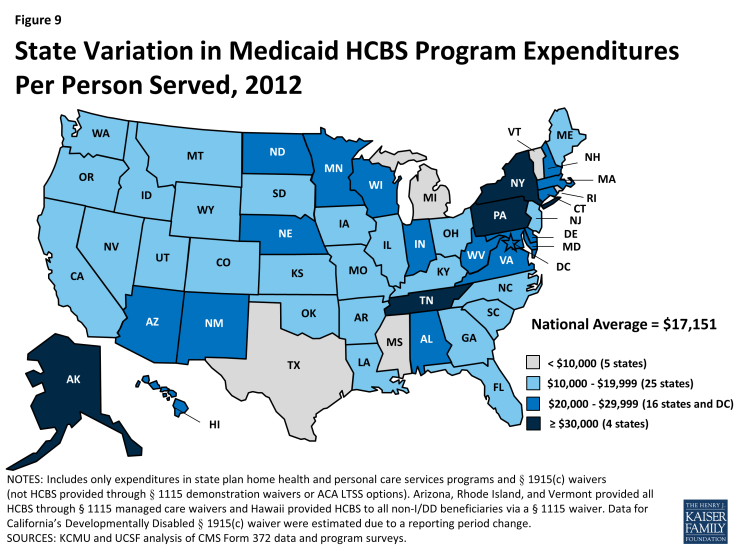 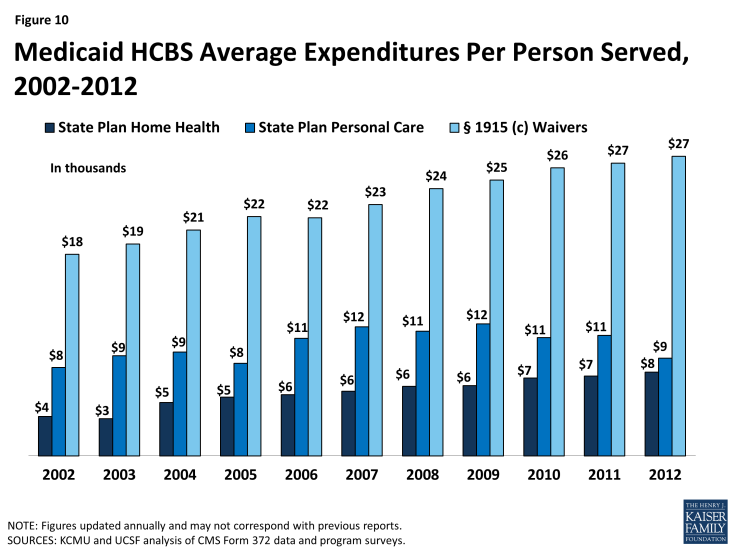 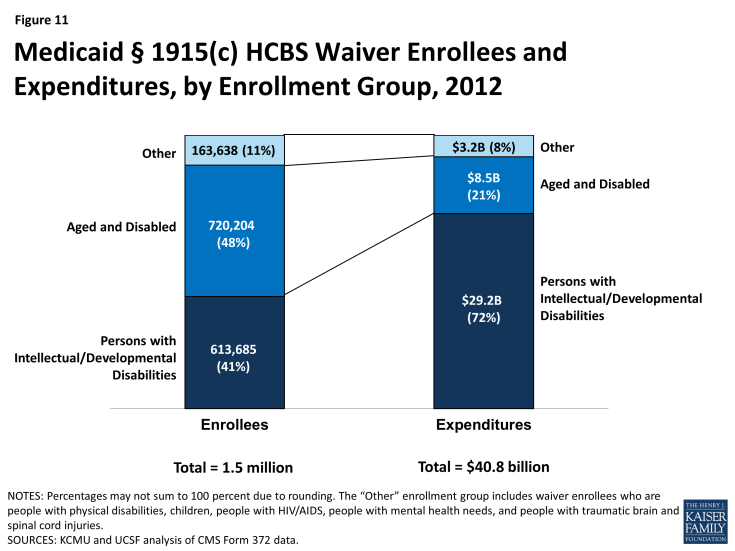 As part of the collection of participant and expenditure data for § 1915(c) waivers, service type data were also collected for individual waivers. States may provide many different services within waivers, which have been collapsed into six categories here: (1) case management; (2) respite/home health/personal care; (3) habilitation/day care; (4) nursing/therapy; (5) residential/foster care; and (6) other services. Participants within a waiver may use more than one service, and, as such, the sum of these participants does not equal the unduplicated total waiver participants. Most participants received “other” services including assistance with chores, meals, transportation, and home modifications. More than 799,000 waiver participants received respite, home health or personal care services within waivers in 2011, with Ohio providing these services to the most waiver enrollees (75,334) (Table 8).

HCBS and Managed LTSS within § 1115 Waivers

In addition to the Medicaid home health and personal care services state plan benefits and § 1915(c) waivers, states can deliver HCBS through § 1115 demonstration waivers.3 Section 1115 of the Social Security Act allows the Secretary of the Department of Health and Human Services to waive state compliance with certain federal Medicaid requirements and authorizes the use of federal Medicaid funds in ways that are not otherwise allowable. Section 1115 waivers enable “experimental, pilot or demonstration project[s] which, in the judgment of the Secretary, [are] likely to assist in promoting the objectives [of the Medicaid program].”4 Section 1115 waivers have been used to implement a variety of initiatives related to HCBS, such as self-direction of personal care services,5 payments to spouses who provide personal care services, and managed LTSS.

In 2012, three states (Arizona, Rhode Island, and Vermont) use § 1115 waivers to administer statewide Medicaid capitated managed care programs that include all covered HCBS for all populations and services; these states do not offer any § 1915(c) waivers. In 2012, Arizona spent $1 billion on HCBS for 43,231 participants, Rhode Island spent $446 million on HCBS for 4,632 participants, and Vermont spent $247 million on HCBS for 3,675 participants.6 Vermont’s model is unique in that the state serves as the managed care entity. Other states that administer Medicaid managed care programs that include HCBS contract with private health plans to provide covered services for a capitated per member per month rate. In addition to Arizona, Rhode Island, and Vermont’s statewide programs, another five states7 (Delaware, Hawaii, New York, Tennessee, and Texas) use  § 1115 waivers for Medicaid capitated managed care programs that include HCBS for at least some geographic areas and/or populations in 2012; these states also offer § 1915(c) waivers for other HCBS.8 Other states implement Medicaid managed LTSS programs through combination § 1915(b)/(c) waivers (Section 1915(b) waivers allow states to offer Medicaid services in a managed care model or otherwise limit a beneficiary’s choice of providers).9