The Medicaid § 1915(c) waiver authority allows states to use a range of cost-containment strategies to meet federal cost neutrality requirements and limit spending so that expenditures do not exceed state budgetary restrictions. To understand how states controlled spending on HCBS waivers in 2014, we surveyed all state § 1915(c) waiver program administrators to assess financial and functional eligibility standards, use of enrollment and/or expenditure caps, and waiting list status (i.e., number of individuals on the list(s) and average waiting time). The survey finds that every state used some type of cost-containment tool in its § 1915(c) waivers beyond the federal cost neutrality requirement that average annual per participant waiver spending not exceed average per participant spending if services were provided in an institutional setting under the state plan absent the waiver. The following summary of the 2014 survey findings illustrates how states use cost control policies to limit access to § 1915(c) waivers. 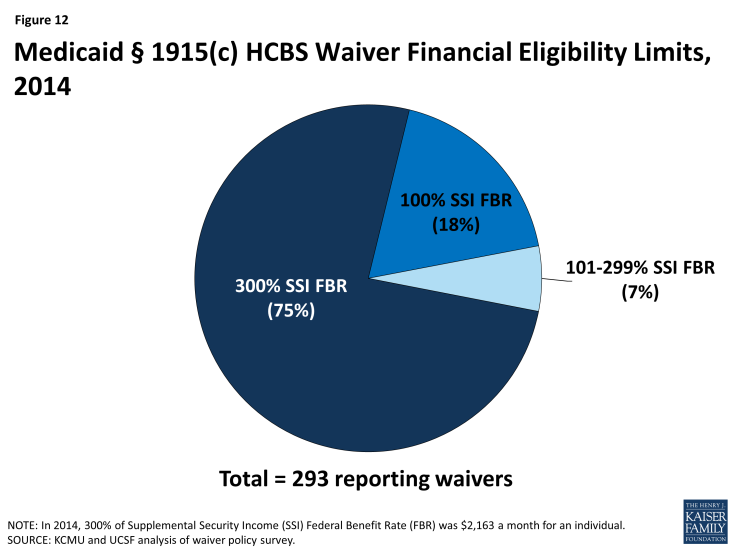 Another way states limit eligibility for § 1915(c) waivers is by using functional eligibility criteria that are stricter than those used for coverage of nursing facility care. For example, a state could require an individual to exhibit difficulty in performing at least three activities of daily living” (ADLs), (e.g., bathing, dressing, transferring, eating, toileting) for waiver eligibility but require limitations in only two ADLs for nursing facility admission. The 2014 survey found that 10 § 1915(c) waiver programs (3%) used functional eligibility criteria that are more restrictive than the criteria used for institutional care (no table shown); these waivers were reported in Alabama, Florida, Georgia, Indiana, Kansas, New York, Texas, and Utah.

Approximately 88 percent (42 states) of all states with § 1915(c) waivers utilized some form of cost controls above and beyond the federally mandated cost neutrality formula in 2014. Many states used a mixture of fixed expenditure caps, service provision and hourly caps, and geographic limits (Table 12). Of the states with waiver cost controls in place, half (21 states) utilized more than one form, such as a combination of expenditure caps and service limitations (Table 12).

Many states have incorporated some form of mandatory or optional self-direction within their § 1915(c) waivers. The self-direction service delivery model can include initiatives such as beneficiary choice in the allocation of service budgets and/or the selection, training, and dismissal of service providers. In 2014, 179 waivers in 42 states (61% of waivers and 90% of states) either allowed or required some form of self-direction (Table 12). 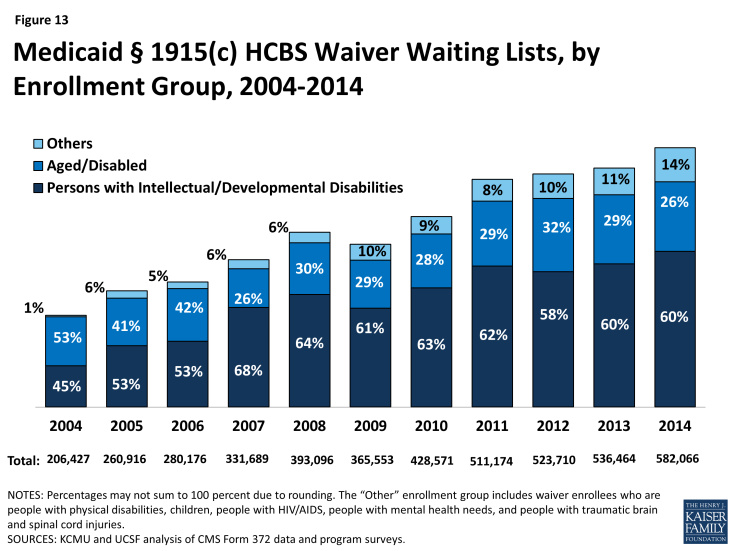 The number of individuals on § 1915(c) waiver waiting lists grew by 8.5 percent from 2013 to 2014, far outpacing the growth rate of 2 percent in the 2012-2013 period. From 2004 to 2014, waiting list enrollment grew by an average of 11 percent annually. Waiting lists for all § 1915(c) waiver target populations increased, with the exception of waivers for people who are aged as well as those for persons with HIV/AIDS (Table 14). The maintenance and length of state waiver waiting lists has implications for states’ compliance with the Olmstead decision which requires states to provide services outside of institutions if beneficiaries are able to live in the community and do not oppose doing so.