Medicaid Expansion, Health Coverage, and Spending: An Update for the 21 States That Have Not Expanded Eligibility

Ever since the Supreme Court ruled in June 2012 that states could effectively choose whether or not to accept the Affordable Care Act’s expansion of Medicaid eligibility, that choice has been one of the most prominent and often one of the most contentious issues for states. In this report, we provide new projections of the impact of Medicaid expansion on health coverage, Medicaid enrollment, and costs in states that have not expanded Medicaid. We find that if the 21 states that have not expanded Medicaid as of April 2015 were to do so:

A central goal of the Affordable Care Act (ACA) is to significantly reduce the number of uninsured by providing affordable coverage options through Medicaid and new Health Insurance Marketplaces. As enacted, the ACA would expand Medicaid for nearly all low-income Americans with incomes up to 138 percent of poverty ($16,242 per year for an individual in 2015). However, the Supreme Court ruling on the ACA effectively made the decision to implement the Medicaid expansion an option for states. For those that expand, the federal government will pay 100 percent of Medicaid costs of those newly eligible from 2014 to 2016.1 The federal share gradually phases down to 90 percent in 2020 and remains at that level thereafter. The state’s standard FMAP applies to services for those that were previously eligible for Medicaid. There is no deadline for states to adopt the expansion; however, the federal match rates are tied to specific years.

As of April 2015, 21 states have not expanded Medicaid. These decisions will have enormous consequences for health coverage for the low-income population. In states that do not implement the Medicaid expansion, millions of low-income adults that could have gained Medicaid will remain ineligible for the program. A small number of these people may be eligible for tax credits to purchase private coverage, but the majority will be left without an affordable coverage option.

In this report, we provide state-level estimates of Medicaid enrollment and the number of uninsured in 2016, both with and without Medicaid expansion, for the 21 states that have not expanded eligibility. We also provide estimates of Medicaid and uncompensated care spending for the period 2015 to 2024. Our spending estimates include acute care for the nonelderly, care for the elderly, and long-term care. Because Medicaid and CHIP are funded by the federal and state governments in partnership, we estimated both the federal and state shares of spending. We used the Health Insurance Policy Simulation Model-American Community Survey (HIPSM-ACS) to estimate the effects of the ACA.2 This paper updates estimates from 2012 and 2013.3 We have made a number of important updates since the older reports:

This report focuses exclusively on Medicaid funding. Children covered through Title XXI Medicaid programs funded through the Children’s Health Insurance Program (CHIP) are not included in our estimates.

The Health Insurance Policy Simulation Model (HIPSM) is a sophisticated microsimulation model that is used to estimate the impacts of health reforms and to inform state and national policy design choices. HIPSM has been used to assist state and federal governments with ACA implementation and analysis of policy options under the ACA.  The core data in the model are from the Census Bureau’s American Community Survey, an annual survey of 3 million U.S. residents.  Census Bureau population projections are used to produce estimates through 2024.  Health care use and spending are estimated for each individual for different insurance types based on data from the Medical Expenditure Panel Survey-Household Component.  The cost of covering an individual in Medicaid varies according to health status, age, previous coverage, state of residence, and other characteristics.  We incorporated state-specific trends in Medicaid costs using data from the Medicaid Statistical Information System, adjusting for the differences in health care costs between adults eligible with and without Medicaid expansion.

We model eligibility status for Medicaid, the Children’s Health Insurance Program and subsidized coverage in the Marketplaces, and then use the HIPSM to simulate the decisions of employers, families, and individuals to offer or enroll in health insurance coverage.  Not everyone who is eligible for Medicaid enrolls in the program.  HIPSM estimates take-up of Medicaid based on an individual’s characteristics, such as income, age, health status, and current coverage, rather than applying a uniform participation rate across the population.  The model is calibrated so that overall take-up rates are comparable to findings in the empirical economics literature.4

With no change in state expansion decisions, we estimate that in 2016, 17.4 million nonelderly people will be enrolled in Medicaid in the 21 states that have not expanded Medicaid eligibility (Figure 1). Were these states to expand Medicaid, enrollment would increase by 40 percent to 24.3 million. Those gaining eligibility under expansion would all be nondisabled nonelderly adults, so the increase in enrollment would be concentrated in that group (from 3.6 million to 10.0 million). However, more than 525,000 more children would also be covered. Although children do not gain eligibility under expansion, the expansion of coverage to parents is expected to make them more likely to enroll their children. 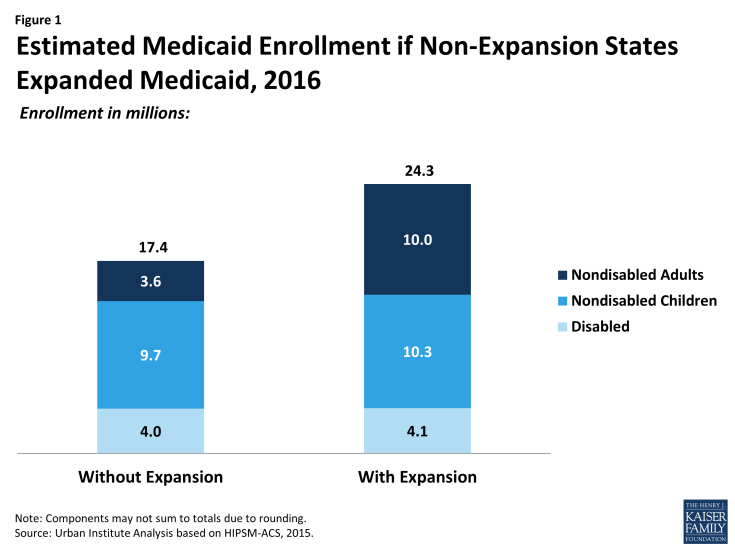 There are considerable differences between states in the extent to which enrollment would grow under expansion (Figure 2 and Table 1). Important state-specific factors that affect enrollment growth under expansion include the underlying income distribution, Medicaid eligibility rules before the ACA, the share of the population who are immigrants, and the availability of employer-sponsored insurance to low-income working families. Three states would see increases in Medicaid enrollment of 50 percent or more: Idaho, Texas, and Kansas. Fourteen states would see enrollment grow between 30 and 50 percent. The smallest rates of growth would occur in states such as Wisconsin that have already extended Medicaid eligibility for adults (both parents and childless adults) beyond what was required by law. In Wisconsin, for example, adults are already eligible up to 100 percent of the FPL through a state plan amendment and under a Section 1115 waiver. 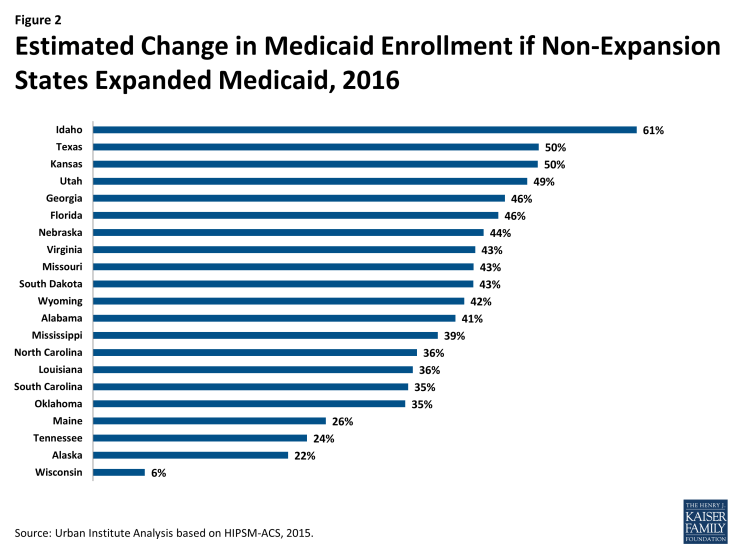 Decreases in the Number of Uninsured People 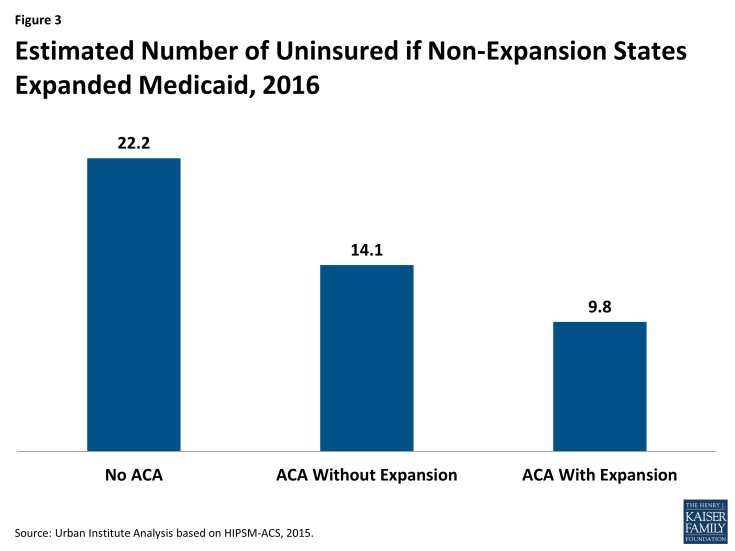 Six states would see their uninsured populations reduced by about 40 percent or more if they implemented the Medicaid expansion (Figure 4 and Table 2): Maine, South Dakota, Mississippi, Alabama, Louisiana, and Missouri. The only state that would see a reduction in the uninsured of less than 25 percent would be Wisconsin. As mentioned above, Wisconsin already covers adults up to 100 percent of the FPL under Medicaid under a Section 1115 waiver. 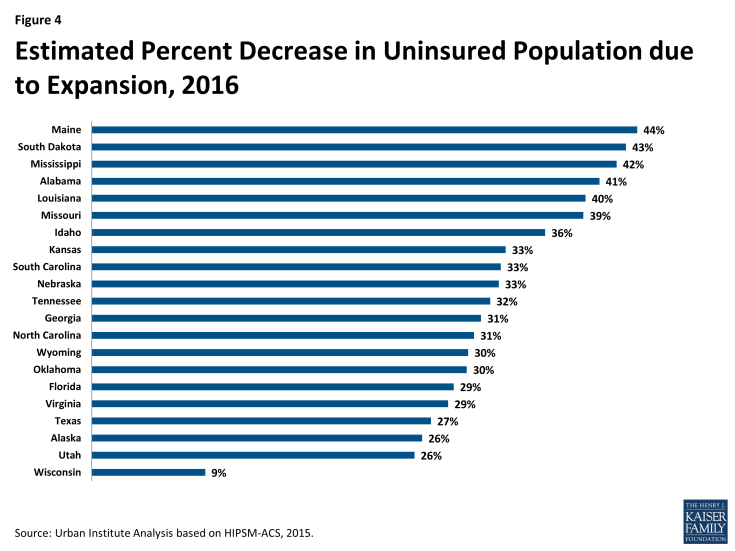 Figure 4: Estimated Percent Decrease in Uninsured Population due to Expansion, 2016

We estimate that from 2015 to 2024, the Medicaid programs in the 21 non-expansion states would spend $2,552 billion with no change in their expansion status, with $1,552 billion funded by the federal government and $971 billion funded by the states (Figure 5). This spending figure includes acute care for the nonelderly as well as care for the elderly and long-term care. Were these states to expand Medicaid, federal Medicaid spending from 2015 to 2024 would rise by 30% while state spending would rise by 4%.

Not surprisingly, the states that would see the largest increases in enrollment with expansion would also see some of the largest increases in the federal and state Medicaid spending (Figure 6 and 7 and Table 3). Idaho and Georgia would see increases of 50 and 48 percent in federal spending and 10 and 8 percent in state spending, respectively. Wisconsin would see a much smaller increase in federal spending for Medicaid and actually spend less in state funding if it were to expand Medicaid. That is because Wisconsin already covers some people who would be considered newly eligible if the state were to expand Medicaid. The federal government would pay a much higher share of the costs of those people than they currently do. Wisconsin would see its state spending on Medicaid decline by nearly 5 percent if the state were to expand eligibility.

It is important to keep in mind that Medicaid expansion affects state budgets in other ways than the amount spent on the care of those enrolled. States can realize savings in other areas that offset these increases. We discuss some of these savings in more detail below. 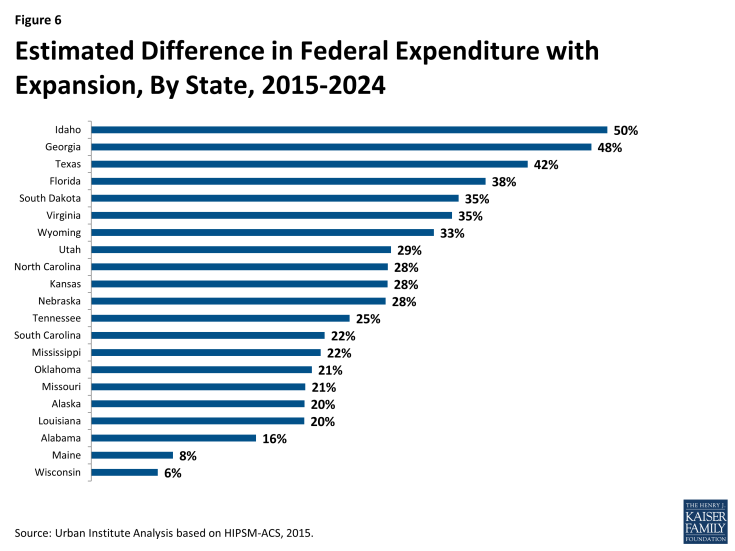 Figure 6: Estimated Difference in Federal Expenditure with Expansion, By State, 2015-2024 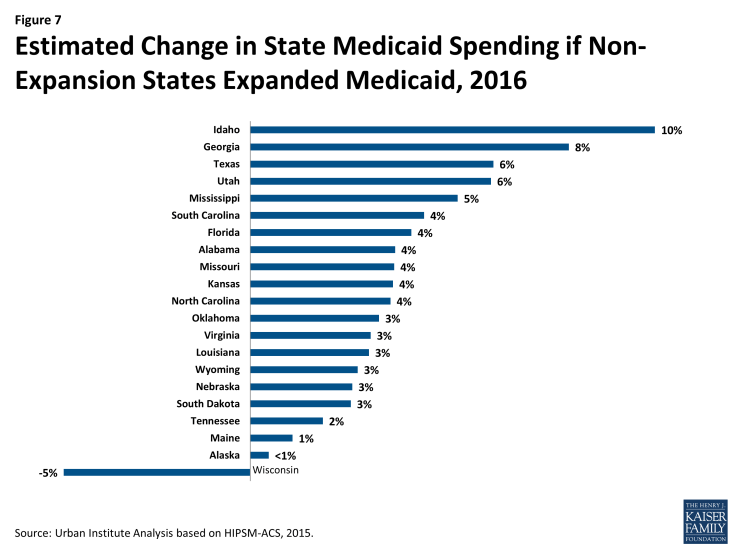 If the 21 states that have not expanded Medicaid were to do so, 4.3 million more people would have health coverage in 2016. Many of the states that have decided against Medicaid expansion are those who would gain the most. This applies when examining the impact of expansion on the uninsured, increases in federal Medicaid funding, or reductions in uncompensated care. Wisconsin would spend less on Medicaid if it expanded eligibility, even without taking into account any other sources of state savings. Most other expansion states would see state Medicaid spending increase by 2 to 6 percent. We estimate that Idaho and Georgia would see larger percent increases. These increases do not accurately reflect the overall impact of Medicaid expansion on the state budget. Reduced costs for uncompensated care are one of several sources of savings that would help to mitigate that increase in state costs. Assuming that states only realize 25 to 50 percent of the reduction in their share of uncompensated care, those savings would offset 13 to 25 percent of the total increase in state Medicaid spending due to expansion. In addition, states could realize other types of budgetary savings and increases in revenue if they expanded Medicaid that are not included in this report.

Similarly, several surveys that have shown notable increases in health coverage in 2014 under the ACA, particularly among states that have expanded Medicaid.7 The decision not to adopt the Medicaid expansion has already begun to create inequities in coverage between states.

In making decisions about expansion, states are also considering fiscal implications. This paper does not attempt to assess the overall impact of Medicaid expansion on state budgets. Our analysis is limited to effects that can be estimated on a 50-state basis. Medicaid expansion has many other, highly significant state fiscal consequences that cannot be quantified without state-specific information. If those factors were taken into account, the state budget effects of expansion would be much more favorable than what we show above.

Numerous studies where a combination of public and private research has examined fiscal effects in all relevant categories—that is, state costs from increased Medicaid enrollment, state savings from increased federal match for current beneficiaries, state savings on non-Medicaid health care costs, and state revenue effects of expansion—have shown that, on balance, Medicaid expansion would help, not hurt state budgets over a multi-year period extending well beyond 2016. Recent state budget projections from expansion states confirm this analysis. Washington State has projected net savings of $79.0 million in state fiscal year 2014 and $258.7 million in 2015 due to expansion.8 Analysis by Deloitte estimated that Kentucky would spend $919.1 million less between state fiscal years 2014 and 2021 due to Medicaid expansion.9 These reports point to savings both within and outside state Medicaid programs (in areas such as mental health spending and corrections) as well as increases in revenue resulting in net fiscal savings to states as a result of implementing the expansion. The Kentucky report also points to increases in jobs as a result of the Medicaid expansion.

There is also evidence that the ACA is already having an impact on health care provided to the uninsured. A number of reports are finding that hospitals in Medicaid expansion states showed overall declines in self-pay and charity care, while hospitals in non-expansion states showed no change beyond normal variation.10 Hospitals, however, are also likely to see some reductions in federal reimbursement from Medicare and Medicaid DSH as well as reductions in future increases to Medicare fee-for-service hospital payments that were included in the ACA. Medicaid DSH reductions were originally scheduled to go into effect beginning in FY 2014 but have been delayed to 2018. Hospitals in states that do not implement the Medicaid expansion will face these reductions without also seeing increases in Medicaid revenue from additional coverage.

States account for a number of factors in making decisions about adopting the Medicaid expansion; however, based on this analysis we conclude that the economic case for Medicaid expansion for state officials is extremely strong.

This brief was prepared by Matthew Buettgens, John Holahan, and Hannah Recht of the Urban Institute.