The ACA standardized many streamlined enrollment and renewal procedures that states pioneered for children in the decades following the passage of CHIP in 1997. It also provided federal funding to support state upgrades to Medicaid eligibility systems, since many states had outdated systems that impeded updates to enrollment and renewal processes. Since the ACA was enacted, states have invested significant time and resources to upgrade or build new eligibility systems, using available federal funding. The modernized technology of these new systems has served as the cornerstone for states to implement the streamlined enrollment and renewal processes in the ACA. Under these processes, states are to use available electronic data to verify eligibility criteria at application and renewal; to provide individuals multiple methods to apply, including online, by phone, via mail, or in-person; to coordinate eligibility decisions with Marketplaces; and to renew Medicaid coverage every 12 months. Implementation of these processes has varied across states, in part reflecting different starting places before the ACA. However, as of January 2017, nearly all states have moved closer to the processes outlined in the ACA, with continued work occurring during 2016.

As a result of these efforts, the Medicaid enrollment and renewal experience has moved from a paper-based, manual process that could take days and weeks in some states to a modernized, technology-driven approach that can happen in real-time in a growing number of states. This shift has reduced burdens on individuals and states and led to shifting roles for eligibility workers, with some states scaling back or redirecting staff resources.

As of January 2017, 39 states can make Medicaid eligibility determinations in real-time (defined as within 24 hours). One of the notable features of upgraded eligibility systems is the ability to check against other electronic data sources in real-time or overnight to provide timely eligibility decisions. During 2016, Idaho and New Mexico began determining eligibility in real-time, and several more states anticipate reaching this milestone in early 2017. At least 50% of applications receive a real-time determination in 15 of the 35 states that were able to report this data (Figure 8), including 9 states that report over 75% of applications receive a real-time decision. 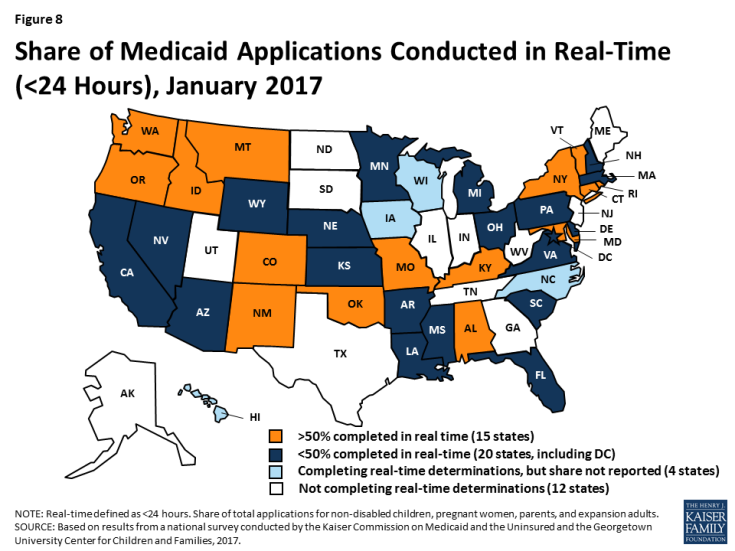 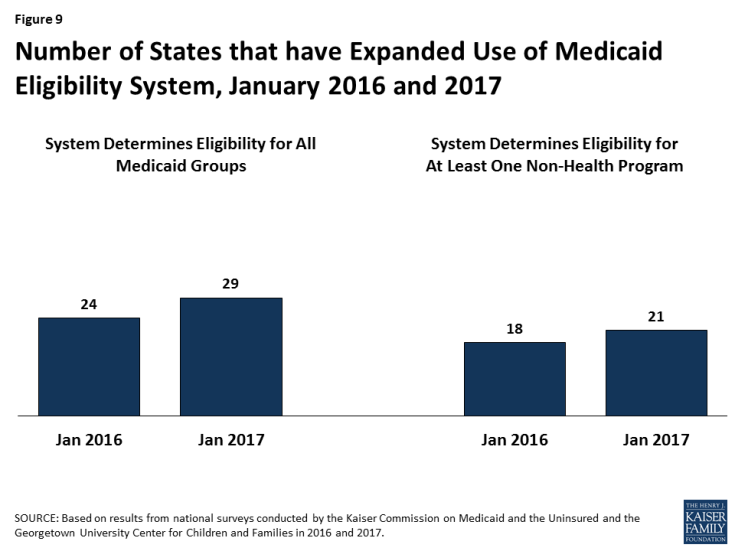 Figure 9: Number of States that have Expanded Use of Medicaid Eligibility System, January 2016 and 2017

Medicaid eligibility systems are integrated with or connected to Marketplace systems in all states. In 12 of the states with a State-based Marketplace (SBM), there is one system that determines eligibility for both Medicaid and Marketplace coverage (Figure 10). The remaining 39 states coordinate with the Federally-Facilitated Marketplace (FFM), HealthCare.gov. This count reflects the dismantling of Kentucky’s SBM enrollment system, kynect, during 2016. States coordinating with the FFM must electronically transfer data back and forth with the FFM to coordinate Medicaid and Marketplace eligibility decisions. Nine of these states have authorized the FFM to make final Medicaid eligibility determinations based on the eligibility rules established by the state, enabling the states to enroll individuals in Medicaid after receiving the account transfer. During 2016, Louisiana began on relying final determinations to facilitate enrollment under its newly implemented Medicaid expansion. In the remaining 30 states, the FFM assesses Medicaid eligibility based on the state eligibility rules. In these states, after receiving the account transfer from the FFM, the Medicaid agency may check state data sources or request additional documentation before completing the eligibility determination. When the ACA was first implemented, there were significant problems with account transfers that contributed to delays in Medicaid enrollment. As of January 2017, only 6 states report ongoing, regular delays or difficulties with transfers, down from 20 as of January 2016. 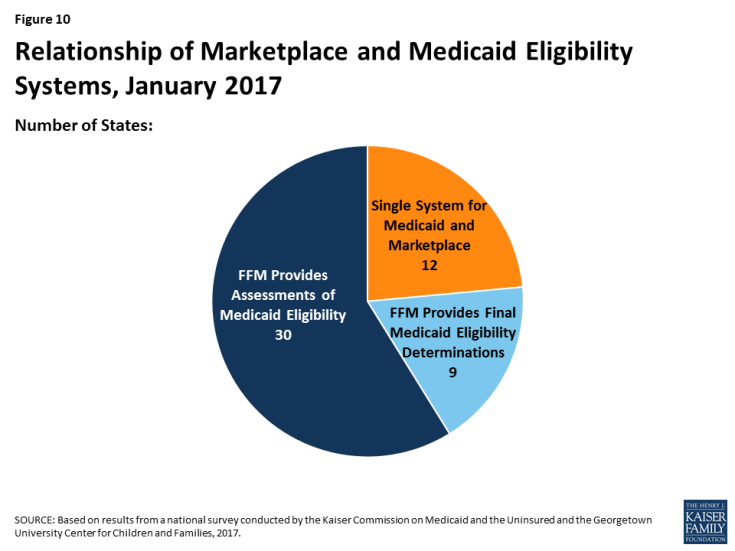 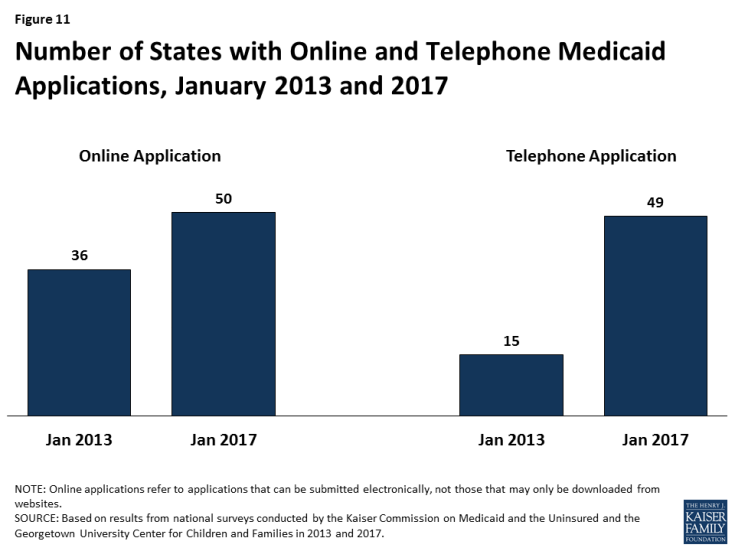 Figure 11: Number of States with Online and Telephone Medicaid Applications, January 2013 and 2017 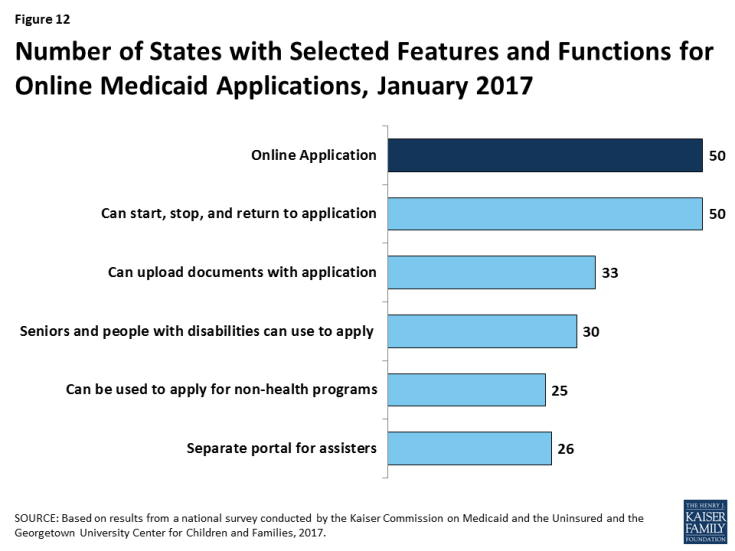 Just over half of the states (26 states) have a web portal or secure login that enables consumer assisters to submit applications on behalf of consumers they help. Massachusetts and New Jersey added a portal for consumer assisters in 2016. In some states, the assister portals have additional functions or features that support the work of assisters, such as the ability to check a renewal date. These types of tools may help reduce workloads on state administrative staff, for example, if assisters are able to update addresses and other information. This functionality may also allow the state to track, monitor and report the work of assisters.

In 41 states, individuals can create an online account to manage their Medicaid coverage after enrollment (Figure 13). Most states provide a wide array of functions through online accounts and states have expanded functionality over time, with several states adding functions to their accounts in 2016. Most of these accounts allow enrollees to report changes, review the status of their application, to renew coverage, and to view notices. Smaller numbers allow enrollees to go paperless and receive electronic notices or to pay premiums. Online accounts create administrative efficiencies by reducing mailing costs, call volume, and manual processing of updates such as an address change. They also provide enrollees increased autonomy to manage and monitor their coverage. 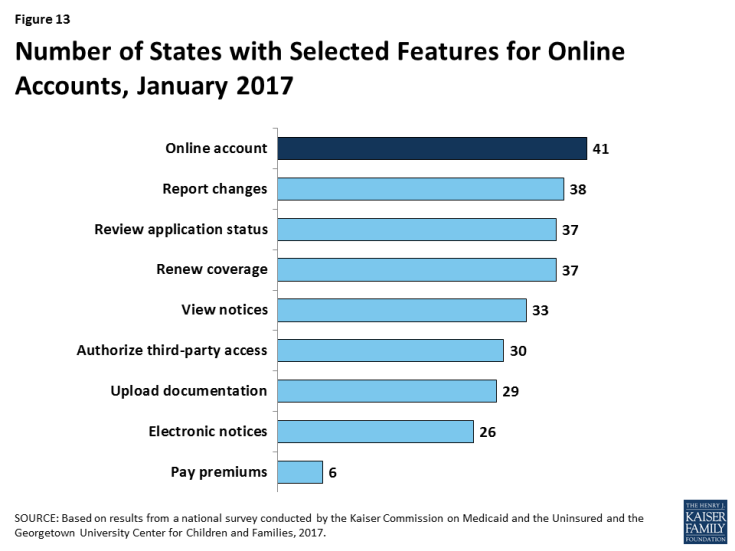 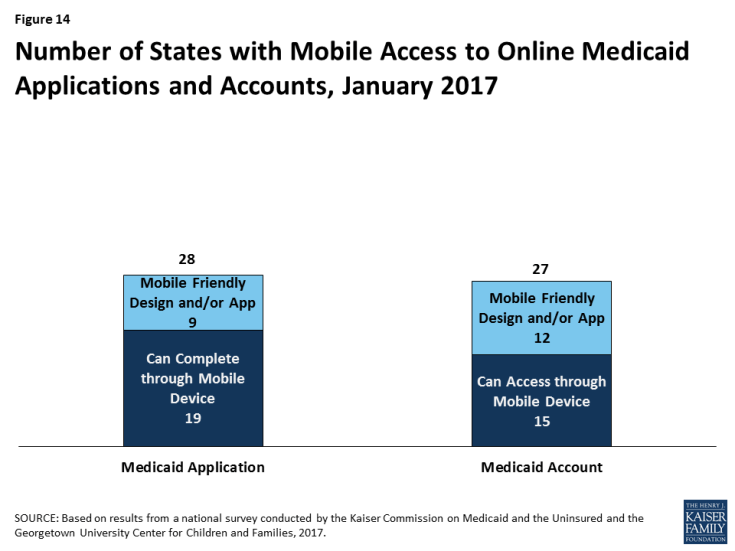 One major shift under the ACA has been for states to rely on data from reliable electronic data sources rather than paper documentation to verify eligibility for Medicaid and CHIP. This change provides for a faster, more efficient eligibility determination process that reduces paperwork requirements for individuals and eases administrative burden on states, although it required significant upfront work by states to establish system connections to other data sources.

All states verify income eligibility, as well as citizenship and qualified immigration status of applicants, as required in Medicaid and CHIP. States must verify citizenship or qualified immigration status in advance of enrollment. Individuals who attest to a qualified status but who cannot have their eligibility confirmed electronically must be given a reasonable amount of time to provide adequate documentation. Nearly all states (44 states) verify income prior to enrollment, while 7 states complete the verification after enrollment. Verification of other eligibility criteria, such as age/date of birth, state residency, and household size vary across states and criteria, reflecting state options to verify this information before or after enrollment or to rely on self-attestation of information. If a state relies on self-attestation, it must verify information if it has any data on file that conflicts with the self-attestation.

All states access income and other information from the Social Security Administration, and many states also use state wage and unemployment data to verify eligibility criteria. As of January 2017, more than two-thirds of states get income and other information through the federal data hub, which was established by the ACA. The data hub enables states to access information from multiple federal agencies, including the Internal Revenue Service, the Social Security Administration (SSA), the Department of Homeland Security (DHS), and a commercial database that provides earnings reported by large employers. States not using the federal hub rely on direct links to SSA and DHS databases that existed before the ACA. In addition, most states utilize state wage and unemployment data for income and other information. Fewer states rely on federal or state tax data.

As of January 2017, 42 states were processing automated Medicaid renewals (Figure 15). This count includes five states that newly implemented automated renewal processes during 2016. Similar to data-driven enrollment, under the ACA, states are to use electronic data when available to renew coverage without requiring an individual to fill out a renewal form or provide documentation. This approach minimizes paperwork for individuals and reduces workloads for states. Among the 38 states able to report the share of renewals that are completed through automatic processes, 19 states report that more than 50% of renewals are automated (Figure 16), including 10 states with automatic renewal rates above 75%. In comparison, only 3 states reported that over 75% of renewals were automated as of January 2016. 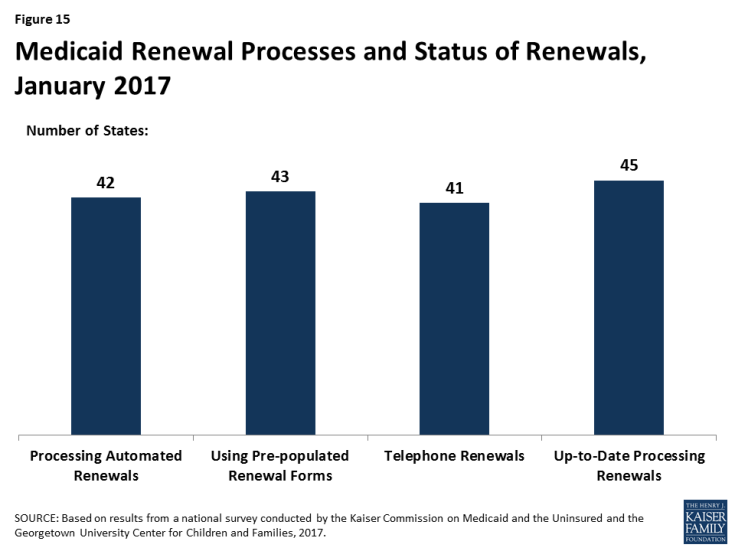 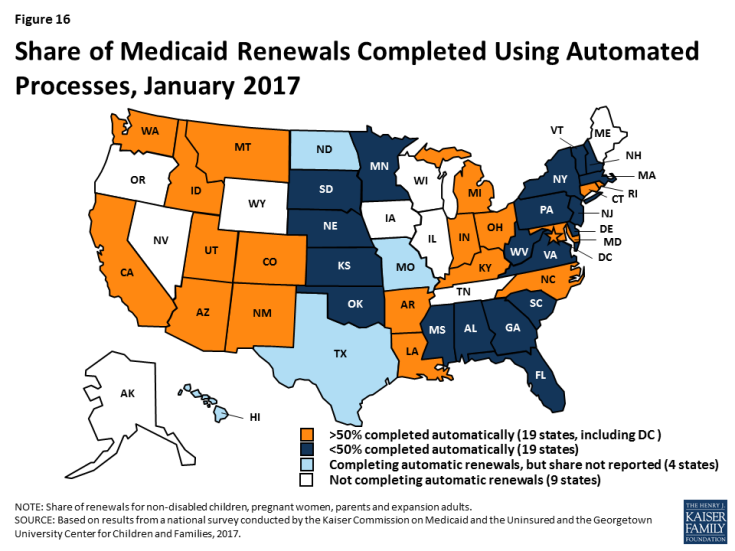 If a renewal cannot be completed based on available data, states are expected to send a pre-populated notice or renewal form to the enrollee and to allow individuals to renew by phone. Between January 2016 and 2017, the number of states able to send pre-populated renewal forms or notices increased from 41 to 43. In 13 states, the forms are populated using updated sources of data from electronic data matches. With the addition of Arkansas and Texas during 2016, individuals can renew Medicaid coverage by phone in 41 states as of January 2017.

Most states are up-to-date on renewals as of January 2017. Six states report ongoing delays in processing renewals, most often citing system challenges or staff capacity as contributing factors.

States can take up additional options to streamline enrollment and renewal beyond the processes standardized by the ACA. Most of these options have been available for many years prior to the ACA, but some were made newly available by the ACA. States’ use of these options may decline over time as states are able to achieve more real-time determinations and automated renewals through their standard processes. However, the options may remain useful for providing access to coverage for individuals who cannot have their eligibility verified in real-time. As of January 2017, states use a range of these options (Figure 17): 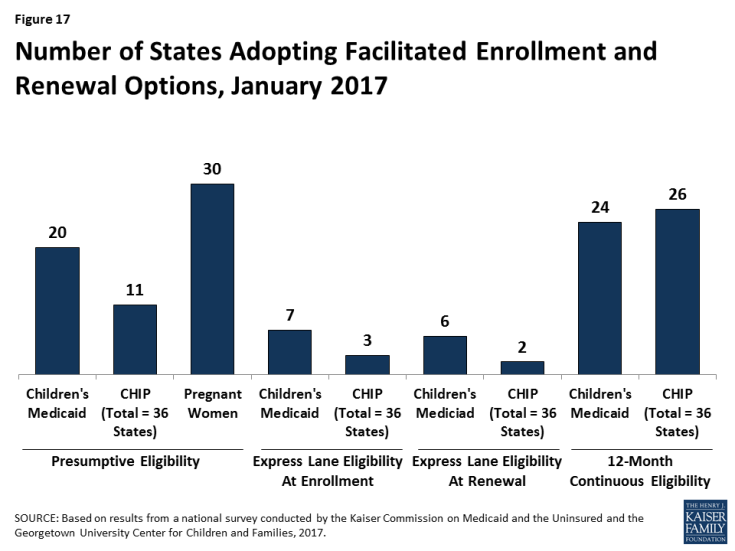