Most income eligibility limits for Medicaid and CHIP are based percentages of the federal poverty level (FPL). As of 2016, the FPL was $20,160 for a family of three and $11,880 for an individual. The ACA established a minimum Medicaid eligibility level of 133% FPL for children, pregnant women, and adults as of January 2014, and included a standard income disregard of five percentage points of the federal poverty level, which effectively raises this limit to 138% FPL. This expansion made many parents and other adults newly eligible for the program. Before the ACA, most states limited eligibility levels for parents to less than the poverty level and other adults generally were not eligible regardless of income. As enacted, the Medicaid expansion was to be implemented nationwide. However, the 2012 Supreme Court ruling on the ACA made the expansion to low-income adults optional. The minimum continues to apply nationwide for children and pregnant women, and, as a result of the minimum, 18 states transitioned coverage for some older children from separate CHIP programs to Medicaid during 2014.

The ACA also changed how financial eligibility is determined for non-disabled groups in Medicaid, including children, pregnant women, parents, and the new expansion adults, to be based on Modified Adjusted Gross Income (MAGI), as defined in the Internal Revenue Code. The ACA eliminated the use of income disregards and deductions other than the new standard disregard of five percentage points of the FPL and required states to convert their pre-ACA eligibility levels to MAGI-equivalent levels.

The findings below show eligibility levels for children, pregnant women, parents and other adults as of January 2017, and identify changes in eligibility that states made between January 2016 and 2017. 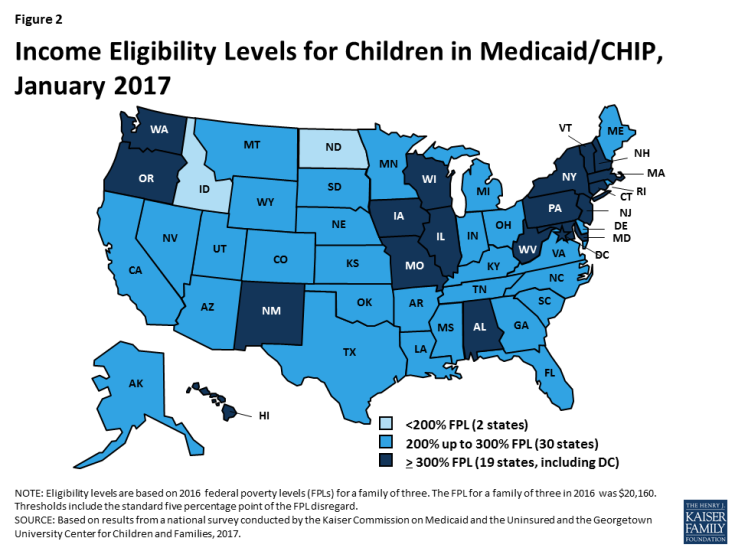 Several states took up options to cover more children through Medicaid and CHIP in 2016. 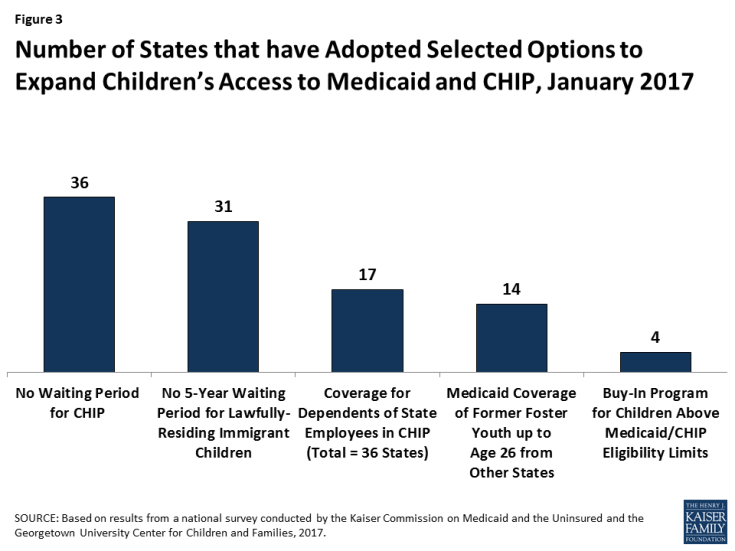 Figure 3: Number of States that have Adopted Selected Options to Expand Children’s Access to Medicaid and CHIP, January 2017

Four states have maintained programs that allow families above the upper income eligibility limit to buy into Medicaid or CHIP coverage for their children as of January 2017.3 The number of states offering buy-in programs declined from a peak of 15 in 2011 to 4 as of January 2017. An increasing number of states eliminated these programs in recent years, because many families above Medicaid and CHIP income limits gained new coverage options through the Marketplaces. 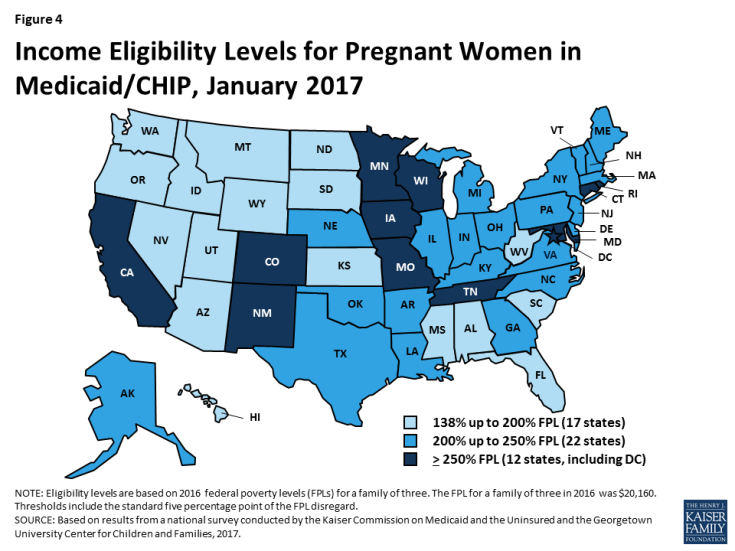 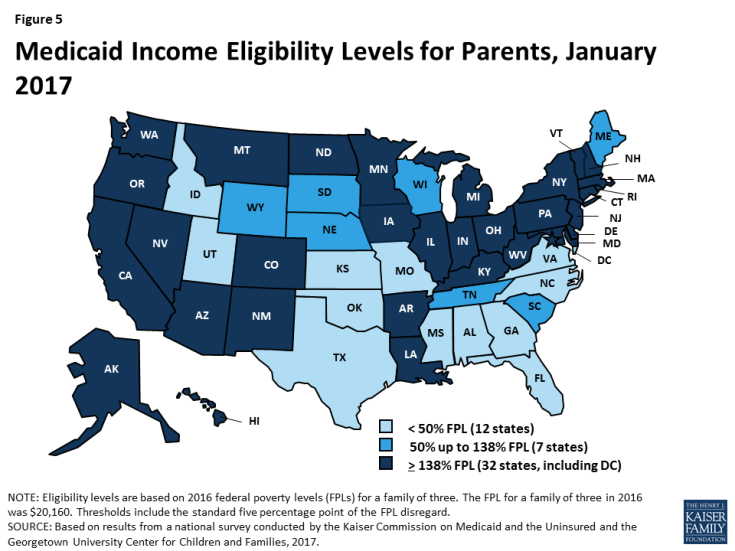 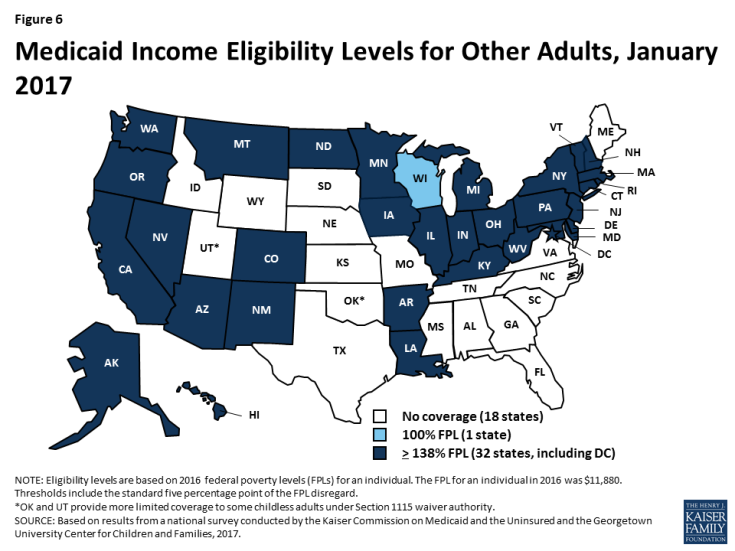 In the 19 states that have not expanded Medicaid, the median eligibility level for parents is 44% FPL, and other adults remain ineligible regardless of income, except in Wisconsin (Figure 7). Among the 19 non-expansion states, parent eligibility levels range from 18% FPL in Alabama to 105% FPL in Maine. Only 3 states—Maine, Tennessee, and Wisconsin—cover parents at or above 100% FPL, while 12 states limit parent eligibility to less than half the poverty level ($10,080 for a family of three as of 2016). Wisconsin is the only non-expansion state that provides full Medicaid coverage to other non-disabled adults, although its 100% FPL eligibility limit remains below the ACA expansion level and it does not receive the enhanced federal match for this coverage. While this study reports eligibility based on a percentage of the FPL, 13 non-expansion states base eligibility for parents on dollar thresholds (which have been converted to an FPL equivalent in this report). Twelve of these states do not routinely update the dollar standards, resulting in eligibility levels that erode over time relative to the cost of living. In non-expansion states, 2.6 million poor adults fall into a coverage gap.4 These adults earn too much to qualify for Medicaid, but not enough to qualify for subsidies for Marketplace coverage, which are available only to those with income at or above 100% of FPL. 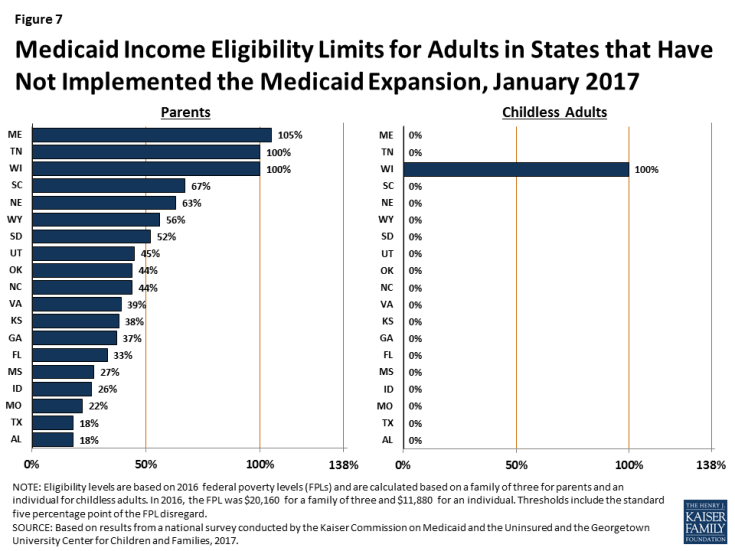 Figure 7: Medicaid Income Eligibility Limits for Adults in States that Have Not Implemented the Medicaid Expansion, January 2017