With the Supreme Court set to hear the King v. Burwell case in March, the latest Kaiser Health Tracking Poll finds that a majority of the public says they have heard nothing at all about the case. In an initial reaction to what Congress or states using the federal marketplace should do if the Supreme Court rules that financial help to buy health insurance is only available to people in states with state-run marketplaces, nearly two-thirds of the public says Congress should pass a law making subsidies available to eligible people in all states, and a majority of the public in states using healthcare.gov would want their state to create its own marketplace. As Congress considers legislation to change the employer requirement under the law, more of the public says they oppose changing the full-time worker definition under the ACA from 30 to 40 hours a week than say they support it and about a third remain unsure, but opinion can be swayed after hearing some of the other side’s argument. With less than a month left in this year’s open enrollment period, most uninsured are unaware of the deadline to enroll and a substantial share remains unaware of the financial assistance available to help eligible people buy insurance.

The Public’s Views Of King V. Burwell And Exchanges

The U.S. Supreme Court will hear a case, King v. Burwell, in March about whether the health care law says people in all states can be eligible for financial help from the government to buy health insurance or if financial help is only available to those in states with state-run marketplaces. At this point, over half of the public (56 percent) says they have heard nothing at all about this case, while an additional 3 in 10 say they have heard only a little. Fewer than 1 in 5 say they have heard at least something about the case (14 percent). 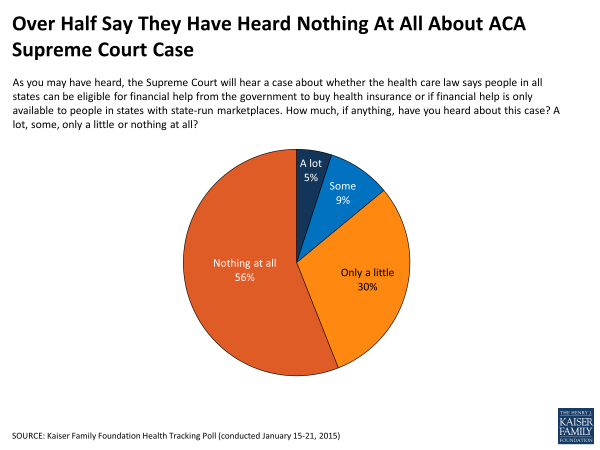 If the Supreme Court rules that financial assistance is only available in states with state-run marketplaces, nearly two-thirds of the public says that Congress should take action so that people in all states can be eligible for financial help to purchase health insurance. Majorities of Democrats and independents say they would support Congressional action, while Republicans are more divided. And, although the Supreme Court’s decision would have significant implications for many people in states using the federal exchange, their views are similar to those of people living in states with their own marketplace.1 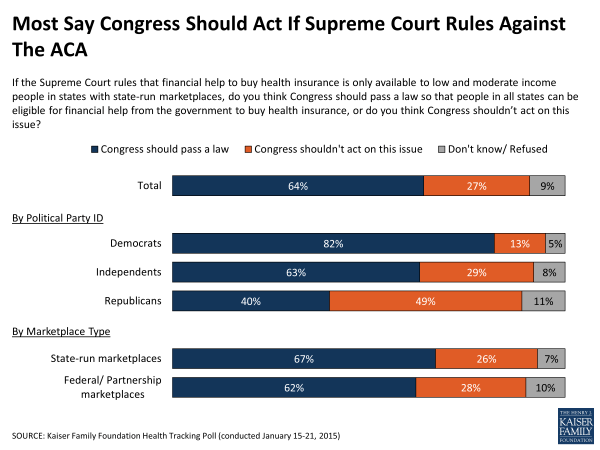 In lieu of Congressional action, states may decide to operate their own exchanges; a move that over half (59 percent) of people living in the federal and partnership marketplace states say they would support should the Supreme Court rule to only allow subsidies in state-run marketplace states. A majority of Democrats (61 percent) and independents (63 percent) as well as about half of Republicans (51 percent) living in these states say they would support state action. 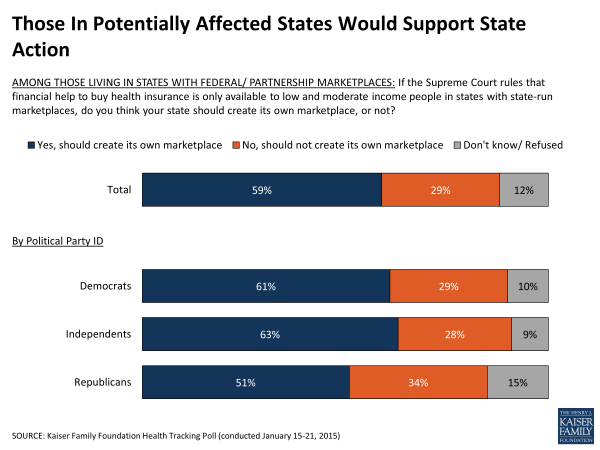 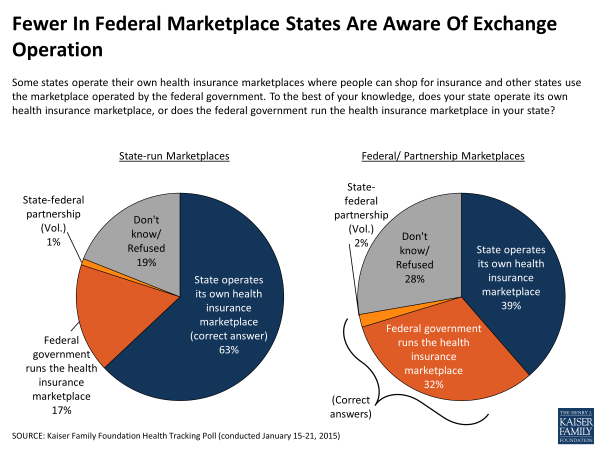 What’s Next With The Law 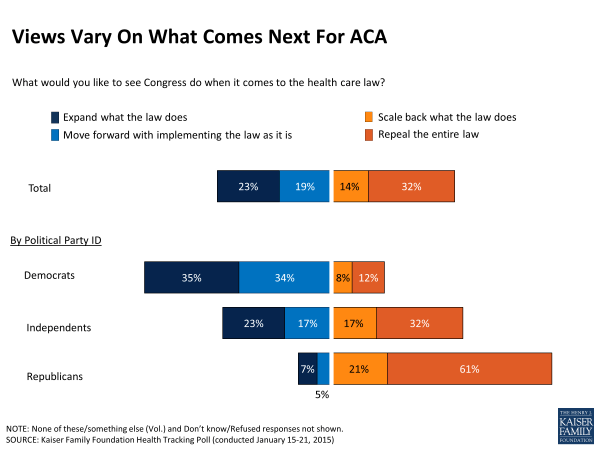 When asked what they think will happen with the health care law in 2015 now that Republicans control both the U.S. House and Senate, Republicans, Democrats and independents have a similar outlook for the year. Across parties, most believe the law will undergo major (31 percent) or minor changes (32 percent). Relatively few say it will be repealed entirely (12 percent) and another 21 percent say the law will continue as is. 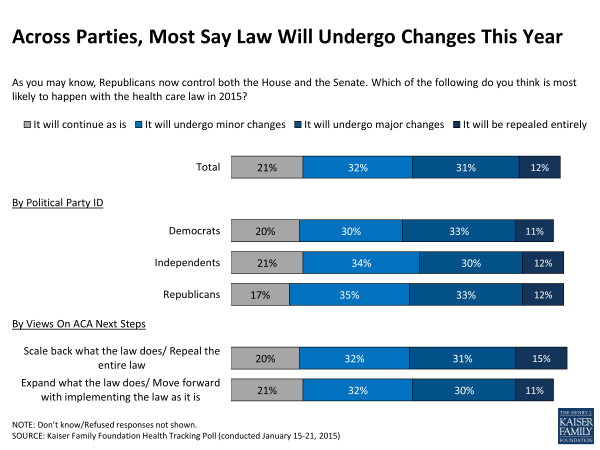 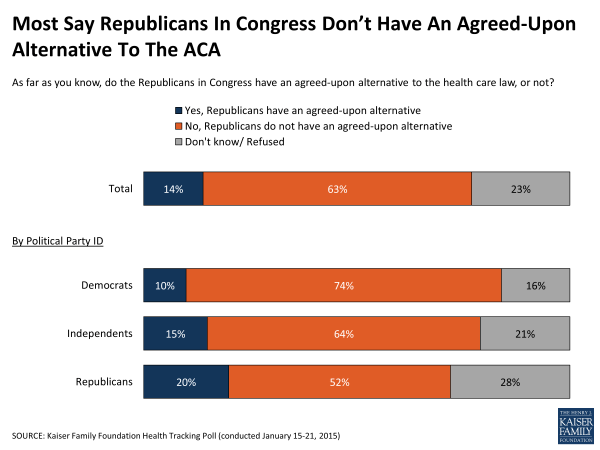 Proposals To Change The ACA

Changing The ACA’s Definition Of A Full-Time Worker

Currently, the ACA requires employers with 100 or more workers to offer health insurance to employees working 30 or more hours per week or pay a fine. Earlier this month, the U.S. House passed a bill that would require these employers to offer health benefits only to employees working 40 or more hours per week and the Senate is considering similar legislation. A plurality of the public opposes this change (40 percent), while about a quarter (26 percent) say they support it and about a third say they don’t know enough to say. Democrats and independents are more likely to say they oppose rather than support the change, while Republicans lean in the opposite direction.

However, opinion on this proposal changes after people hear an argument from the other side. After those opposed to the proposal were provided the statement that “low- and moderate-income employees who don’t work enough hours to get health insurance at work could get financial help from the government to buy their own coverage in the health care law’s marketplace,” support for the proposal increases from 26 percent to 41 percent.

Conversely, when those who support the change are told “this change would increase the federal budget deficit and lead more employers to reduce hours for some full-time workers so they wouldn’t be required to offer them health insurance,” opposition to the proposal increases from 4 in 10 (40 percent) to about half (51 percent). 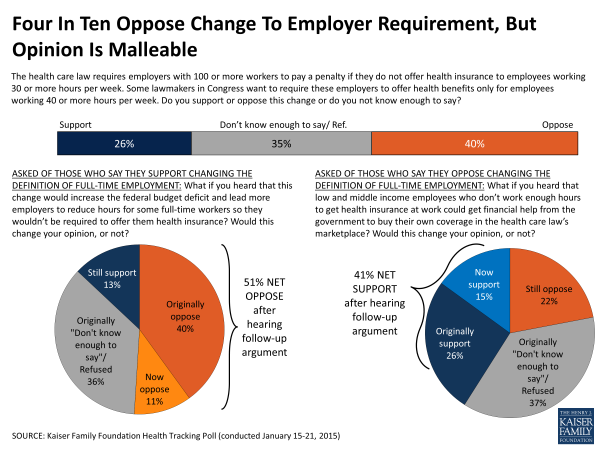 Some lawmakers in Congress, including both Republicans and Democrats, support repealing a provision of the ACA that taxes the manufacturers of medical devices such as artificial joints and pacemakers in order to help pay for other parts of the law, including Medicaid expansion and subsidy assistance. When asked to weigh in on repealing the tax, 3 in 10 say they support it and half as many (15 percent) say they oppose it.  However, the majority (54 percent) says they don’t know enough to say whether they support or oppose repealing the medical device tax. 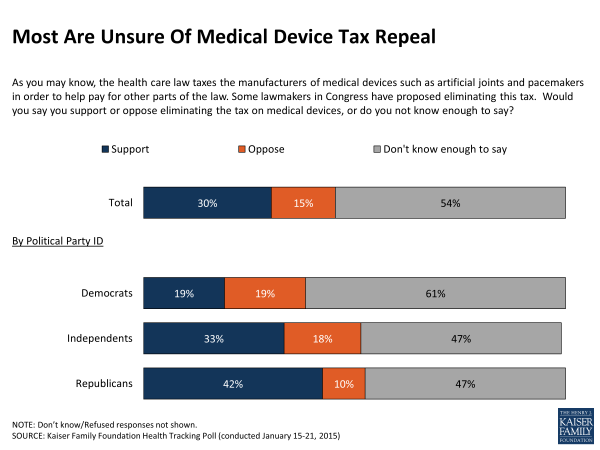 The public is doubtful that lawmakers in Congress are proposing changes to the ACA in an effort to improve the law. More than twice as many say that when lawmakers propose changes they are doing so more because they are trying to gain political advantage than say they are doing so because they think it will improve the law (63 percent vs. 29 percent). Republicans are divided, while large majorities of both Democrats and independents feel that lawmakers suggest changes in an effort to gain political advantage. 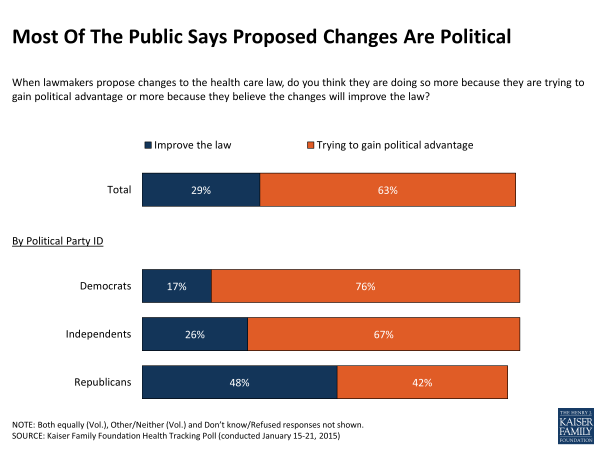 Views Of The ACA In The New Year

Overall views of the law haven’t changed in the past few months and continue to tilt negative. Forty-six percent of the public say they have an unfavorable opinion of the law while 40 percent say they favor the law. There continues to be a wide gap in views by party identification, and Republicans are almost twice as likely to say they feel “very unfavorable” toward the law than Democrats are to say they feel “very favorable” (61 percent vs. 35 percent). A plurality of the public (40 percent) say their impression of the law is based mostly on what they’ve seen in the media, while smaller shares say it’s based on their own experience (28 percent) or what they’ve heard from friends and family (21 percent). 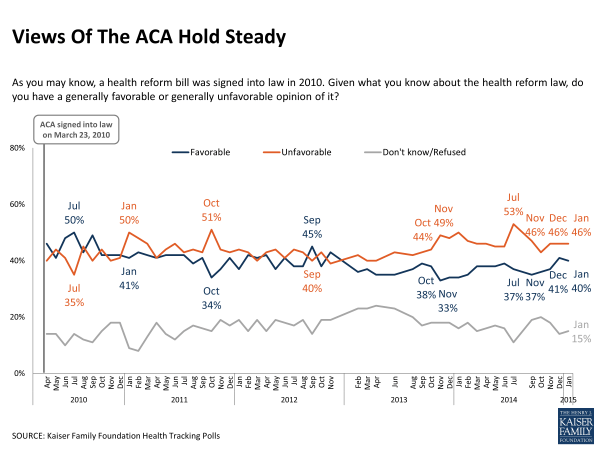 Continue Debate Or Move On

After more than five years of debate about the health care law, the public is split on whether the conversation should continue. Half say they think it is important for the country to continue the debate over the health care law while 45 percent say they are tired of hearing about it and that the country should focus more on other issues. A majority of Republicans say the debate should continue, while a majority of Democrats feel the country should focus on other issues. Independents mirror the public at large. 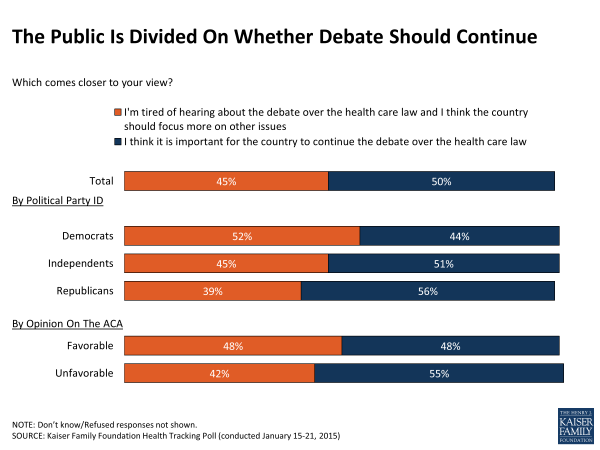 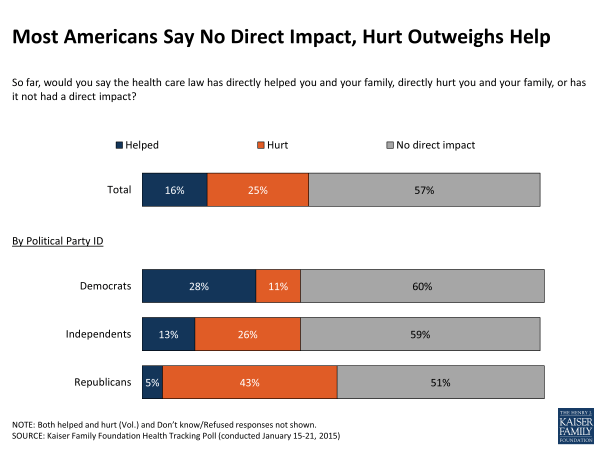 The Uninsured As Open Enrollment Nears Its Close

As open enrollment under the ACA comes to a close next month, 17 percent of the uninsured are aware that the deadline to enroll is February 15.  Most of the uninsured (60 percent) say they don’t know the deadline, 11 percent give a date outside of the enrollment period and 13 percent say the deadline has already passed or there is no deadline. Though few uninsured (12 percent) report being contacted about the health care law, about 4 in 10 uninsured (41 percent) say they have sought out more information about the law over the past few months; predominantly through the internet (24 percent), including healthcare.gov specifically (9 percent). 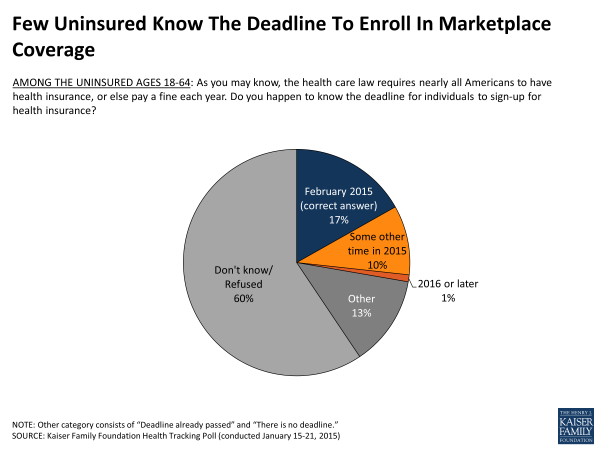 Over 4 in 10 uninsured (44 percent) say they have enough information to understand how the health care law will impact them. A similar share (42 percent) are aware that financial assistance is available to help low- and moderate-income people buy health insurance. And while 56 percent of the uninsured are aware that the law developed marketplaces where people can shop for health plans, only about 1 in 5 uninsured (22 percent) say they know at least something about these marketplaces. 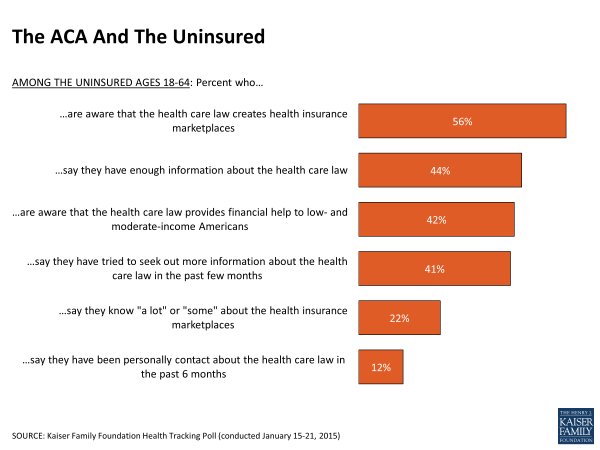 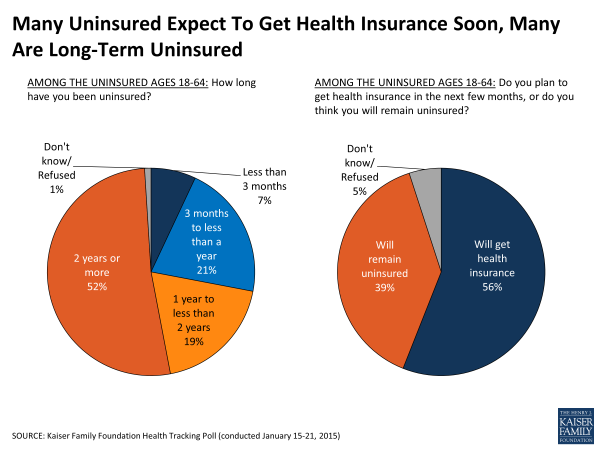