The enrollment surge at the end of March in the health insurance exchanges, created by the Affordable Care Act (ACA), was widely covered in the news, as was the announcement that at least 8 million people have used the new marketplaces to sign up for coverage.  The news got a fair amount of attention from the public, with over half saying they followed the enrollment numbers “very” or “fairly closely.” But the latest Kaiser Health Tracking Poll finds that this news did little to change the public’s impressions of the law, with overall opinion remaining exactly where it was last month (46 percent unfavorable, 38 percent favorable). While over four in ten correctly identify the number of people who have signed up for insurance1, enrollment levels do not register as a success for most Americans. Nearly six in ten (including half of those who correctly identified the 8 million figure) believe enrollment fell short of the government’s expectations, and the same share believe the rollout problems indicate that the law is not working as planned. Still, more want the government to give the law a chance than want to scrap it and start over; nearly six in ten would prefer their representative in Congress work to improve the law, while just over a third want them to repeal and replace it. When asked why they haven’t gotten coverage yet this year, over a third of the uninsured say they tried to get coverage but it was too expensive, while smaller shares say they didn’t know about the ACA’s requirement to have insurance or didn’t think it applied to them. Just 7 percent of the uninsured say they would rather pay the fine than pay for coverage. This month’s tracking poll also finds public support for the ACA’s requirement that private health insurance plans cover the full cost of birth control, including a majority who believe that for-profit companies should be subject to this requirement even if their owners object to birth control on religious grounds.

Despite the announcement that at least 8 million people have signed up for health insurance through the ACA’s new marketplace, overall favorability of the law remains exactly where it was in last month’s tracking poll, with 46 percent of the public saying they have an unfavorable view and 38 percent a favorable view. This is a slight improvement over polls taken from November through January, but still represents a more negative tilt to opinion than was measured in Kaiser tracking surveys before the troubled launch of the exchanges last October. 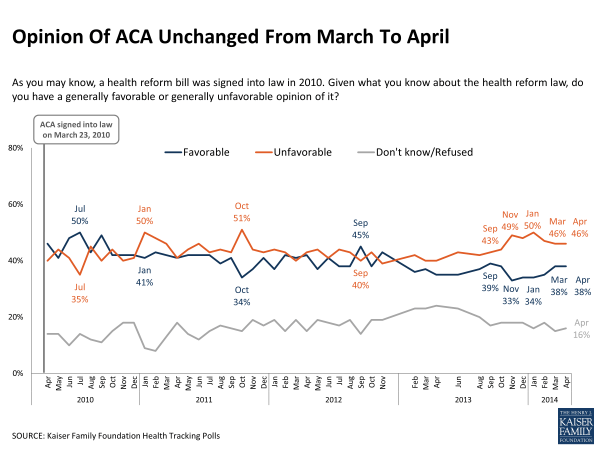 As it has been since the start, opinion remains highly polarized by political party, with three-quarters of Republicans having an unfavorable view of the law and two-thirds of Democrats viewing it favorably. 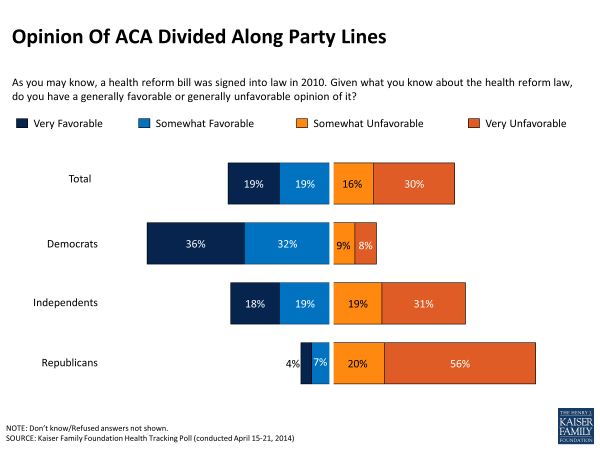 “8 million” registered with many, but majority don’t view first enrollment period as a success

Just over four in ten Americans (43 percent) were correctly able to identify that “about eight million” people2 have signed up for coverage through the ACA’s new marketplaces as of April. Still, the majority of the public does not seem to register this as a success. Nearly six in ten believe that the number of people signing up for coverage fell short of the government’s expectations. Even among those who correctly identified the fact that 8 million people have signed up so far, roughly half believe enrollment fell short of expectations. 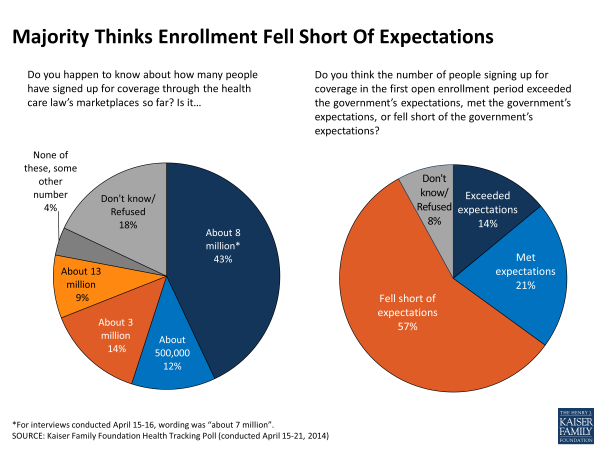 While almost four in ten believe the early problems with the law have been fixed, almost six in ten say “there have been so many problems since the law’s rollout that it’s clear the law is not working as planned.” There are expected partisan divisions on this question, but even among Democrats, who generally view the law favorably, about a third believe the law is still not working. 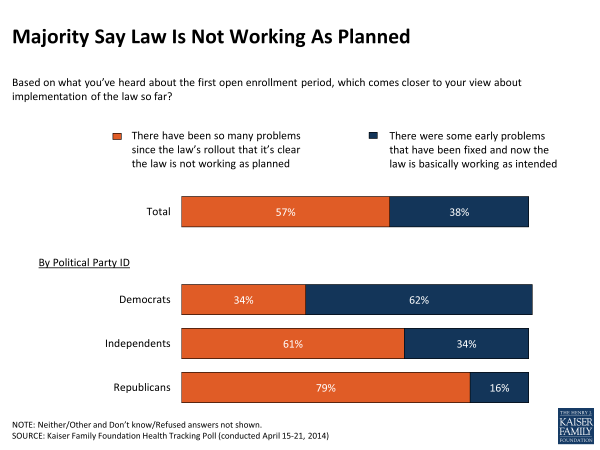 More want Congress to improve the law than repeal and replace

Despite this, the public is inclined to give the law a chance to work rather than throwing it out and starting over. Nearly six in ten (58 percent) say they want their representative in Congress to work to improve the law, while just over a third (35 percent) want them to work on repealing it and replacing it with something else. Like opinion on the law overall, this question is deeply divided by political party. Still, about three in ten Republicans and the same share of those with an unfavorable view of the law say they would prefer Congress work on improving it rather than repealing and replacing it. 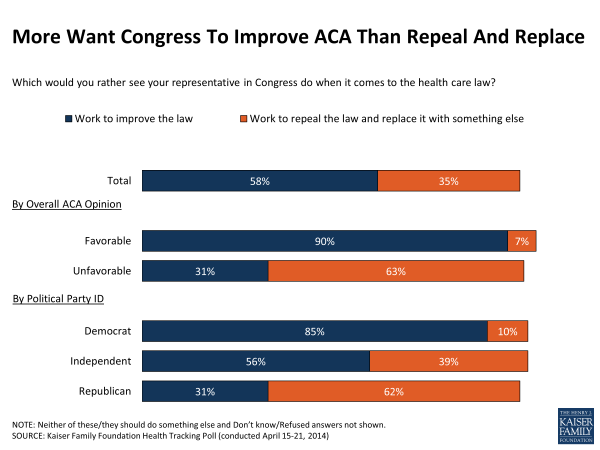 When asked to say in their own words why they don’t currently have health insurance, the most common reason mentioned by the uninsured is that it is too expensive (39 percent), followed by employment-related reasons such as being unemployed or working for an employer that doesn’t offer coverage (22 percent). Roughly one in ten say they just haven’t gotten around to getting coverage or missed the deadline to apply (11 percent), and a similar share feel they don’t want or need coverage (9 percent). 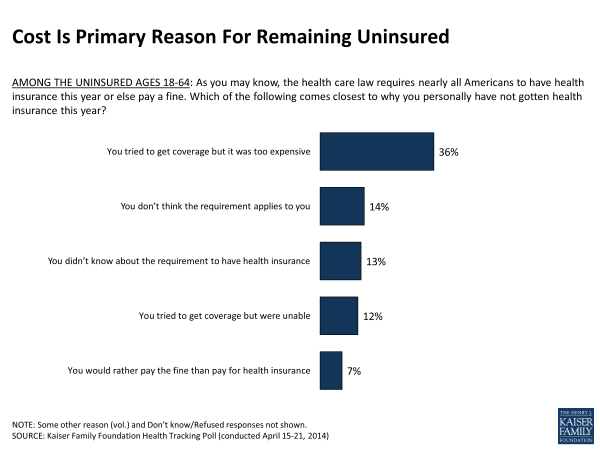 Almost half the uninsured (45 percent) think they will have to pay a fine for not having health insurance this year, though a sizeable share of the uninsured (15 percent) say they don’t know what the amount will be. 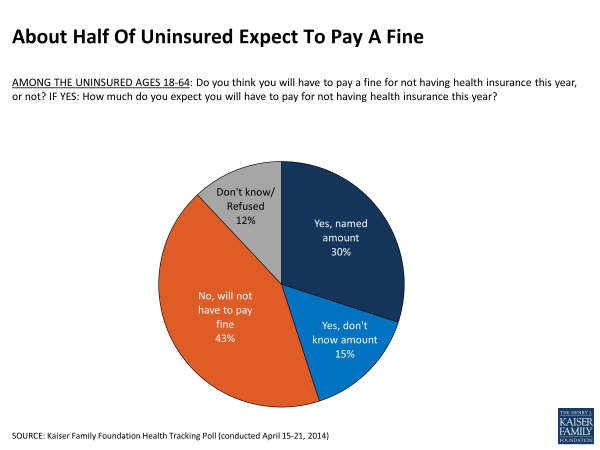 Among the public overall, almost half (46 percent) say they don’t know what the fine is for people who don’t get health insurance this year, while 23 percent give responses close to the actual fine, including 14 percent who named dollar amounts between $90 and $100, 5 percent who said it is one percent of a person’s household income, and 4 percent who gave the precise answer that the fine is either $95 or one percent of income, whichever is greater.

In light of the recent Supreme Court hearings in two cases challenging the ACA’s requirement that private health plans cover prescription birth control without cost-sharing, the latest Kaiser Health Tracking Poll finds that, in general, the public supports the requirement by a nearly 2-to-1 margin (61 percent support, 32 percent oppose). Women, younger adults, Democrats and independents are the groups most likely to support the requirement, while seniors are split on the question and a majority of Republicans are opposed.

More details on the public’s attention to health policy news in April can be found in the Kaiser Health Policy News Index.