The CMS report shows that, among the 42 states reporting data for February to April 2018, the average share of applications processed in less than 7 days was 53%, including an average of 34% processed in less than 24 hours (Figure 2).1 On average, states processed 14% of applications in over 45 days, beyond the timeframe specified under federal rules. Application processing time varied widely across states (Appendix Table 1). 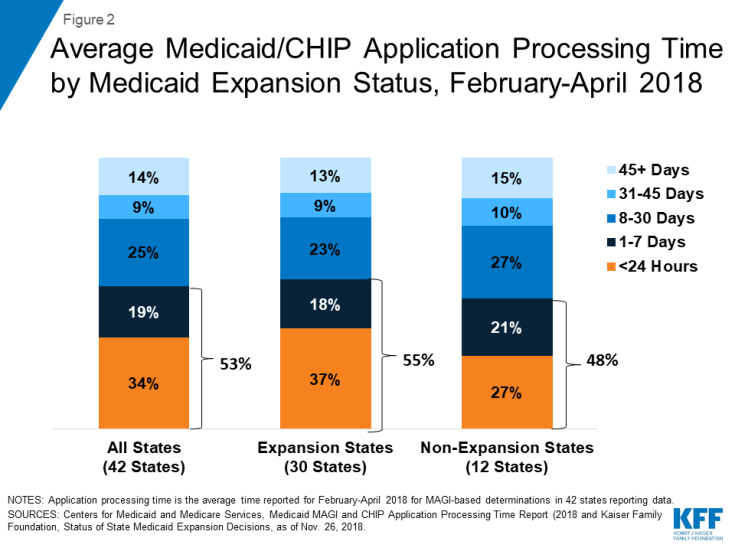 Eligibility and Enrollment Policies and Processes 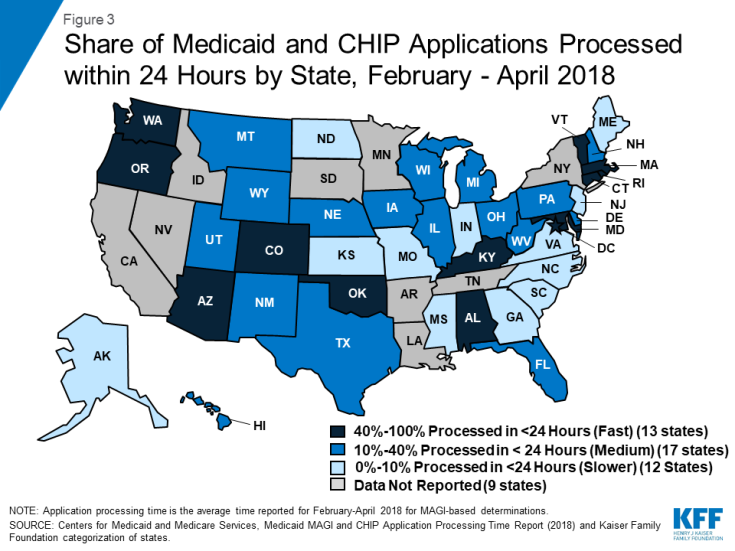 States that had fast or medium application processing times generally had broader eligibility than slower states. The majority of states with fast or medium application processing times have adopted the ACA Medicaid expansion to adults and expanded children’s Medicaid/CHIP eligibility to above 250% FPL (Figure 4). In contrast, among the 12 slower states, only half (6) have adopted the Medicaid expansion, and four have expanded children’s eligibility to above 250% FPL. 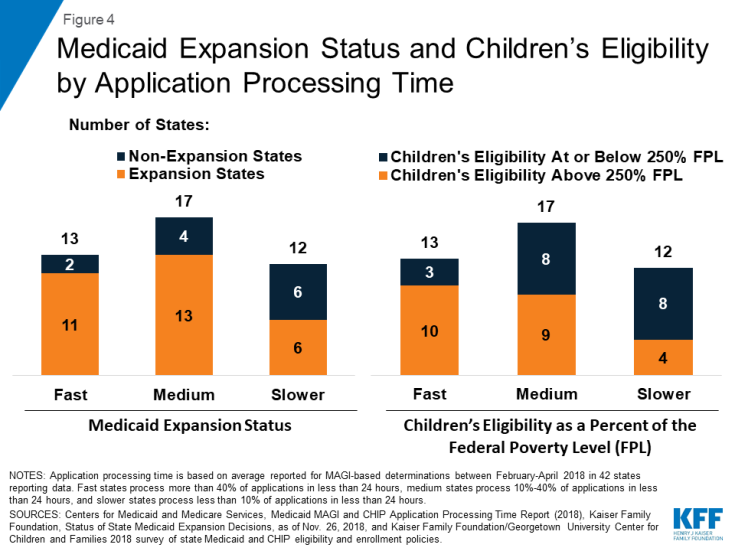 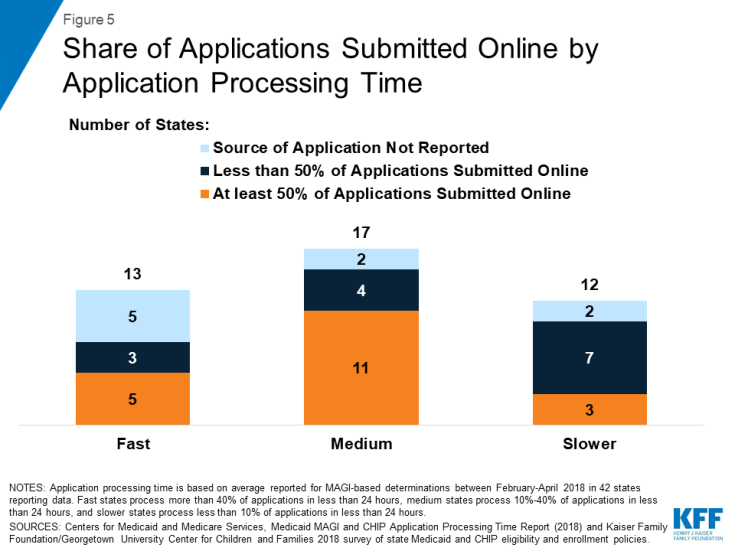 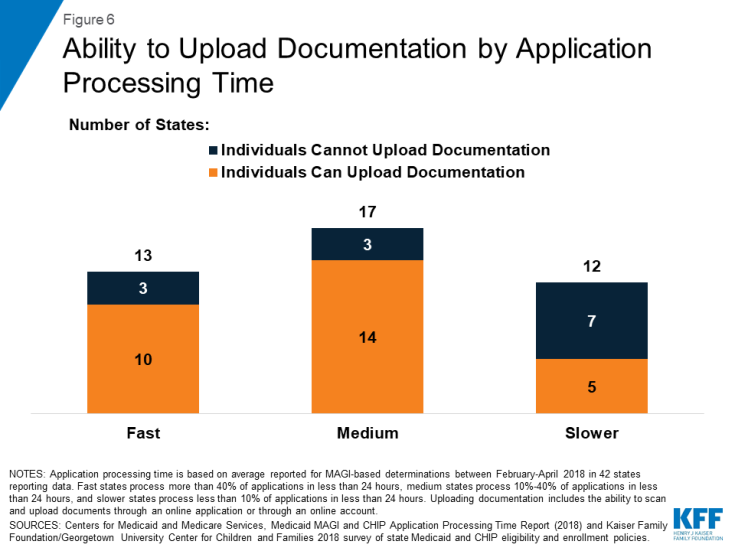 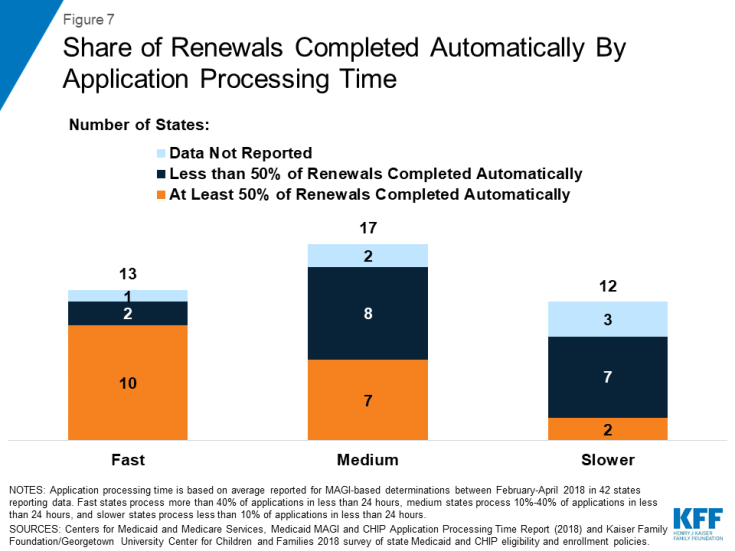 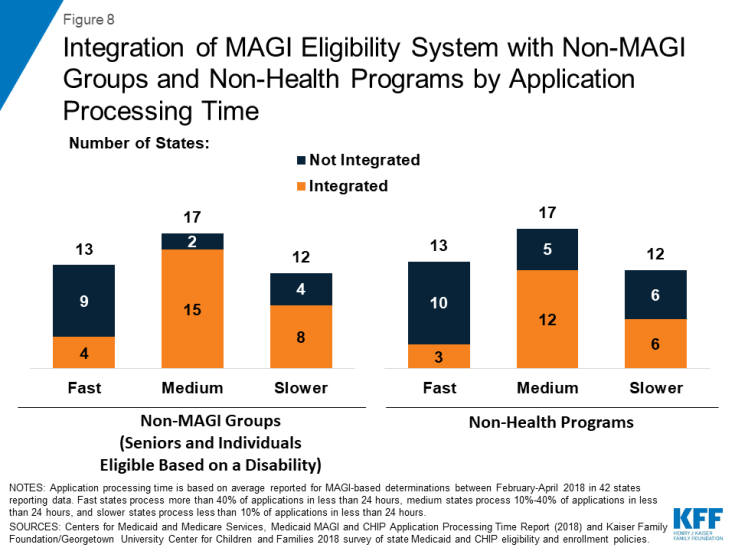 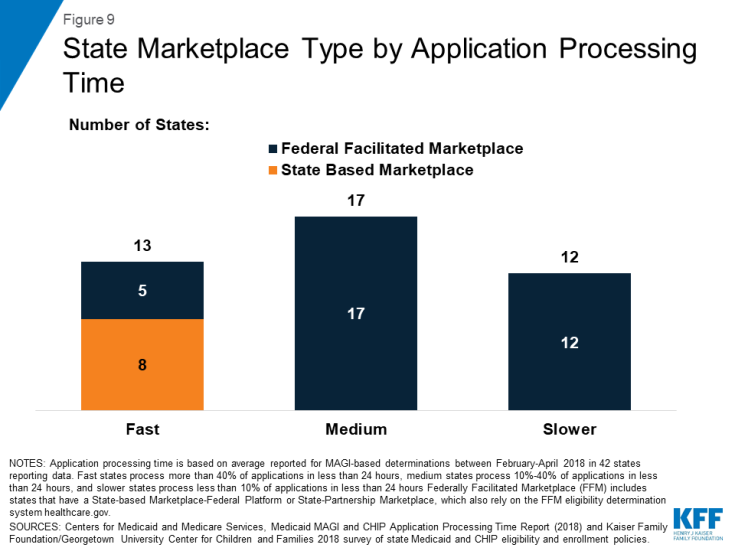 In November 2018, CMS released new state data on MAGI Medicaid and CHIP application processing time. These data reflect continued progress in reporting of performance indicators that CMS established in 2013 to facilitate data-driven program management and improvement. The data show that, across the 42 states reporting data for February to April 2018, on average, over half (53%) of applications were processed within 7 days, including over a third (34%) processed in less than 24 hours.

The ability for states to make real-time eligibility determinations, as demonstrated by these new data, illustrates the significant progress states have made in streamlining and automating enrollment processes under the ACA. Through the ACA’s streamlined policies and state efforts, the Medicaid enrollment and renewal experience has moved from a paper-based, manual process that could take days and weeks in some states to a modernized, technology-driven approach that can happen in real-time through electronic data matches to verify eligibility criteria.5 These changes facilitate individuals’ ability to access and maintain coverage and provide opportunities for states to realize administrative efficiencies and increase accuracy of determinations and renewals. However, there remains significant variation across states in application processing time, and continued opportunities for improvement to ensure states complete all MAGI eligibility determinations within 45 days, as required under federal rules. Recent waivers in some states to add eligibility and enrollment restrictions, including work reporting requirements, could reverse the progress achieved in streamlining enrollment, resulting in additional barriers to coverage and coverage losses.