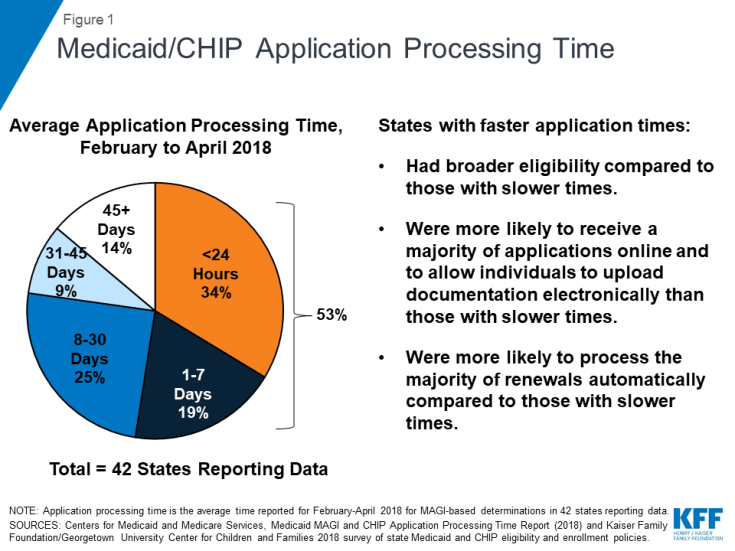 States’ ability to make real-time eligibility determinations illustrates the significant progress achieved in streamlining and modernizing enrollment under the ACA. However, there remains significant variation across states and opportunities for continued improvement. Recent waivers in some states to add eligibility and enrollment restrictions, including work reporting requirements, could reverse the progress achieved in streamlining enrollment, resulting in additional barriers to coverage and coverage losses.

In addition to expanding coverage through the Medicaid expansion and Health Insurance Marketplaces, the ACA established streamlined Medicaid eligibility and enrollment policies3 and coordinated application and enrollment processes for Medicaid, CHIP and the Marketplaces. Through these streamlined policies and significant federal and state investments in technology, states have adopted a single streamlined application for health coverage programs, implemented online and telephone applications, and increased use of electronic data matching to verify data in lieu of requiring paper documentation, such as paystubs, from individuals. These changes support faster and, in some cases, real-time eligibility determinations and automated renewals, facilitating individuals’ ability to access and maintain coverage and providing opportunities for states to realize administrative efficiencies and increased accuracy of determinations and renewals. The technology upgrades also provided new opportunities to improve data collection and reporting capacity.

Capitalizing on the improved data reporting potential arising from eligibility system upgrades, in 2013, CMS established a new set of Medicaid and CHIP Eligibility and Enrollment Performance Indicators intended to facilitate data-driven program management and improvement.4 However, states faced challenges producing data consistent with the reporting requirements, since many had already completed their system builds by the time CMS released the measures or were still operating on older legacy systems.5 Since October 2013, CMS has been publishing monthly Medicaid and CHIP Application, Eligibility Determinations and Enrollment reports that include a subset of the performance indicators, including the number of applications submitted, the number of eligibility determinations made, and the number of individuals enrolled in Medicaid and CHIP. 6 The quality and completeness of these data have improved over time as states have continued to refine their eligibility systems and reporting capabilities. In November 2018, CMS released the first Medicaid MAGI and CHIP Application Processing Time Report, which it describes as the first in a series of periodic updates.7 These new data on application processing time mark continued progress in reporting of the performance indicators. However, there are remaining indicators that CMS has not yet reported.