In advance of AIDS2016, the 21st International AIDS Conference (IAC) which will be held in Durban, South Africa, July 18-22, this report provides the latest data on donor government funding to address the HIV epidemic in low and middle-income countries.  It is part of a more than decade-long partnership between the Joint United Nations Programme on HIV/AIDS (UNAIDS) and the Kaiser Family Foundation (Kaiser) to track donor government funding on HIV, assessing both bilateral spending and multilateral contributions.  These data from 2015 mark the end of the Millennium Development Goals (MDG) era, and the return of the IAC to Durban after 16 years. At that time, there were approximately 3.2 million new HIV infections globally,1 less than 100,000 people on antiretroviral therapy (ARVs) in Sub-Saharan Africa,2 and donor government funding for HIV had just topped US$700 million.3  Today, new infections have fallen by more than a third to 2.1 million, there are more than 10 million people in Sub-Saharan Africa on ARVs – and 17 million on ARVs in low and middle income countries overall – and donor government spending is in the billions.  Still, UNAIDS estimates that resources to address the epidemic will need to rise in low- and middle-income countries from US$19 billion in 2015 to US$26.2 billion in 2020 to reach global “Fast Track Targets” and put the world on a trajectory to end AIDS by 2030.4  A key component of these resources is funding from donor governments.  The report provides these data for 2015, the latest available.

Donor government spending to address HIV in low and middle-income countries, which includes multiple types of assistance (see Box 2), declined by more than $1 billion in 2015 (US$7.53 billion in 2015 compared to US$8.62 billion in 2014), a 13% decline (see Appendix).  Spending declined for 13 of 14 donor governments assessed in the analysis, and declined even after adjusting for inflation.7 These declines are due to a complex set of factors, including the significant appreciation of the U.S. dollar, resulting in the depreciation of most other donor currencies. However, even in their currencies of origin, funding declined for 11 of 14 governments.  Other factors include a delay in bilateral disbursements by the U.S. government and the front-loading of pledged contributions to the Global Fund to Fight AIDS, Tuberculosis and Malaria by some donors. Still, spending declined even after accounting for these factors.  As such, it marks the first decline in donor government funding to address HIV in 5 years.

Assistance is provided by donor governments through both bilateral and multilateral channels, and some mix of the two (see Box 3).  Decisions about how much assistance to provide through these different channels (what “mix” to use) are dependent on several factors, such as: the desired level of control over the use of funds by donors; varying approaches to cooperation and coordination; a donor’s own internal capabilities and field staff capacity for carrying out programs; and recipient country governance and capacity.

The majority of donor government assistance for HIV is provided bilaterally, including 74% (US$5.6 billion) in 2015, although in recent years there has been a shift towards greater use of multilateral channels (see Figures 3 & 4). As with overall funding, bilateral funding fell in 2015, by US$715 million, or 11%, compared to 2014, declining for all 14 governments assessed (and 12 of 14 in currencies of origin; the Netherlands and Norway increased bilateral funding in their currencies of origin). 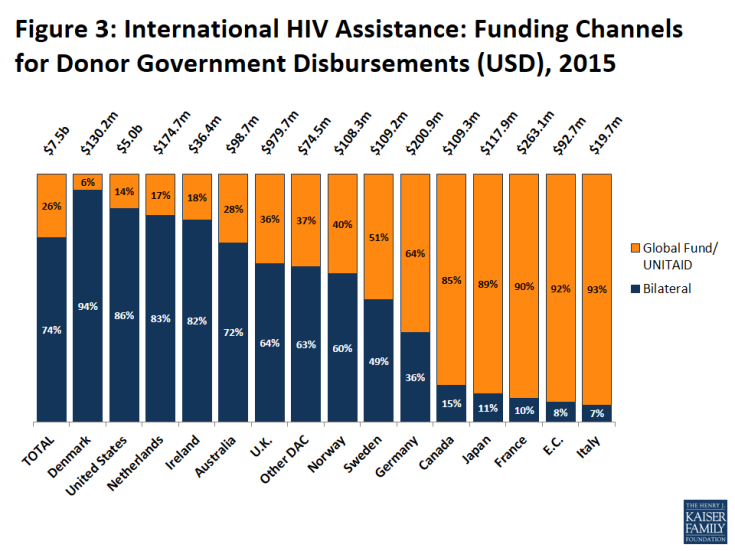 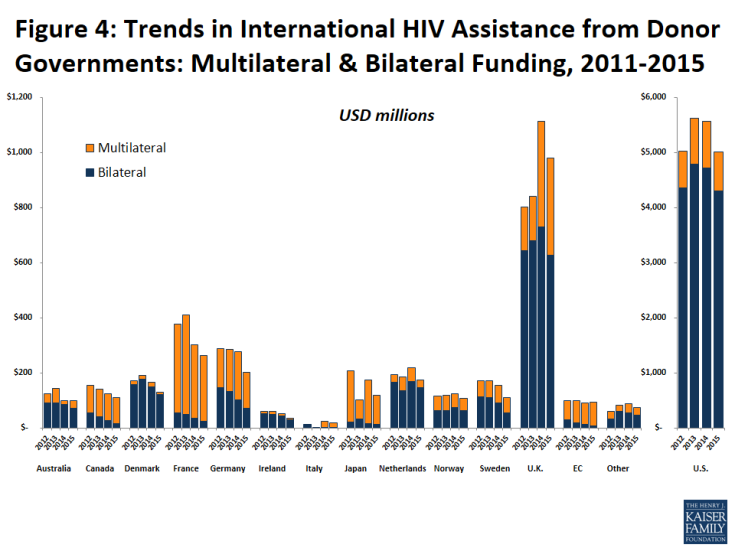 A significant driver of this decrease was the U.S. government, whose bilateral funding declined by US$411 million in 2015, accounting for 57% of the bilateral spending decline.  However, this decline was largely an issue of timing, as the U.S. reports8 that it pushed much of this funding into 2016 to account for (a) the start-up of the new DREAMS program, a $385 million partnership, including $330 million from PEPFAR, aimed to reduce HIV infections among adolescent girls and young women in 10 sub-Saharan African countries; (b) the expansion of voluntary medical male circumcision services in 14 Eastern and Southern African countries ($90 million) and (c) planned reductions in funding in a subset of countries that were over-funded relative to the size of their epidemics.  Without counting the reduction in U.S. bilateral spending, most of which is expected to be disbursed in 2016, total funding (bilateral and multilateral) from donors declined by 8 percent.

Multilateral assistance, which accounted for 26% of funding for HIV in 2015, totaled US$1.9 billion, a decline of 15% (US$330 million) compared to 2014.  Contributions to the Global Fund were down by $305 million (after adjusting for an HIV share), declining for 11 of 14 governments assessed (and 8 in currencies of origin). Some of this decline was due to unique factors, including a subset of donors who front-loaded their contributions to the Global Fund in 2014 as part of a three-year, 2014-2016 pledge made during the Global Fund’s last replenishment period, and to the U.S. government’s pledge to match investments in the Global Fund by $1 for every $2 raised, resulting in a decline in 2015.  Contributions to UNITAID were down by $25 million (adjusted for an HIV share).9,10

In 2015, 7 donors provided most of their funding through bilateral channels, particularly Denmark (94%), followed by the U.S. (86%), the Netherlands (83%) and Ireland (82%).  Still, 7 donor governments (Canada, France, Germany, Italy, Japan, Sweden and the European Commission) provide most of their HIV funding through multilateral channels (the Global Fund and UNITAID). While HIV funding provided by all donor governments through multilateral channels totaled 26% in 2015, without the U.S., which provides most of its funding bilaterally, the share rose to 51%.

Not all governments provide multilateral contributions. In 2015, for example, 7 members of the Organisation for Economic Co-operation and Development’s (OECD) Development Assistance Committee (DAC) did not contribute to the Global Fund.11 In addition, only four DAC members contributed to UNITAID.12

The majority of international assistance for HIV has historically been provided by a subset of donors (France, Germany, the Netherlands, the U.K., and the U.S.), with the U.S. consistently being the single largest (in both bilateral disbursements and contributions to the Global Fund). Since 2006, these five donors have accounted for approximately 80% or more of total assistance for HIV. In 2015, the U.S. continued to be the largest donor in the world, accounting for two-thirds (66.4%) of HIV disbursements by donor governments (Figure 5). The U.K. was the second largest donor (13.0%), followed by France (3.5%), Germany (2.7%), and the Netherlands (2.3%). The U.S. was also the largest donor to the Global Fund followed by the U.K., France, Germany, and Japan. France was the largest donor to UNITAID followed by the U.K. and Norway. 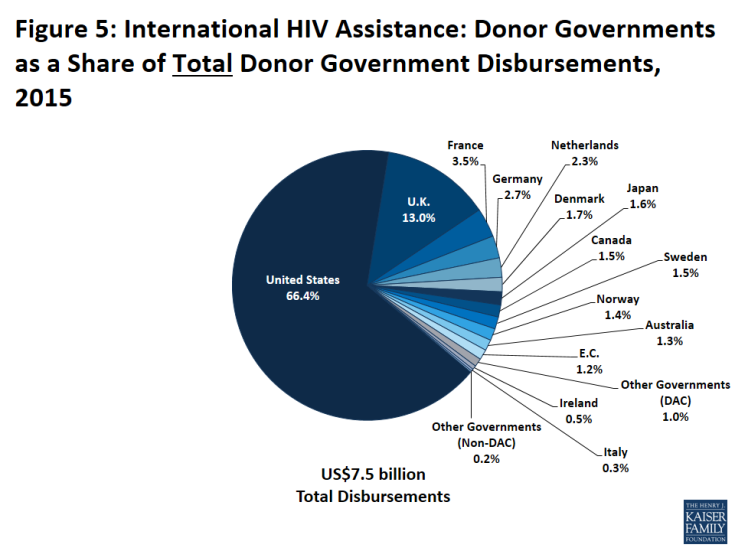 One question that often arises is what constitutes each government’s “fair share” of international HIV assistance efforts. Yet, such assessments are complex and there is no single, agreed-upon methodology for making them, and several questions must be considered, including:

These questions have implications for the methodology chosen to assess fair share and there are inherent limits in using any one methodology for doing so.  For example, a rank by total funding does not capture the relative wealth of a nation.  Yet a standardized measure including wealth does not take into account certain other donor policies that may inhibit or facilitate the amount of assistance such as tax subsidies for charitable giving. Table 1 provides several different comparative measures that could be used to assess fair share: 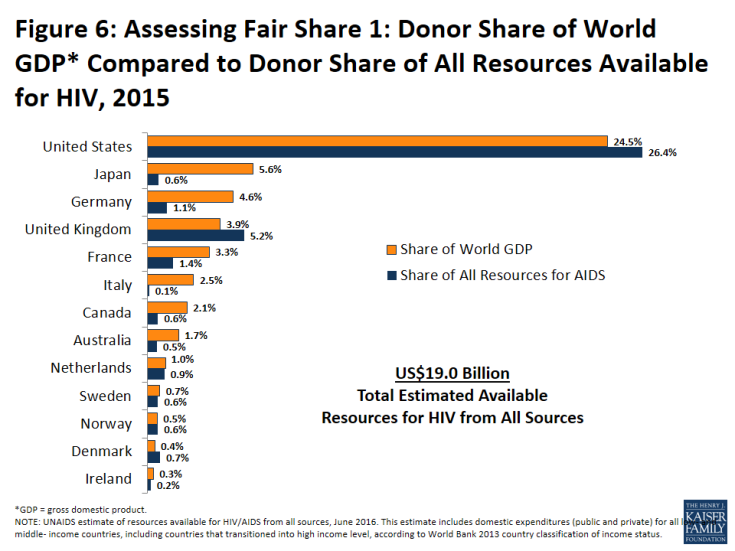 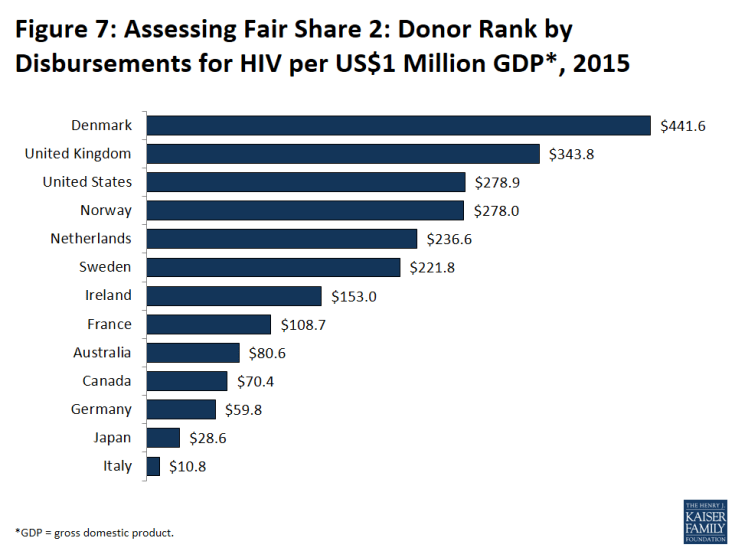 UNAIDS estimates that US$19 billion was available to address HIV in low- and middle-income countries in 2015, but US$26.2 billion is needed by 2020 to meet global HIV targets to end AIDS as a global public health threat by 2030.13  This leaves a more than US$7 billion gap to be filled over the next five years.  While funding from donor governments remains significant – accounting for approximately 40% of total resources for HIV in 2015 – findings from this year’s report, as well as prior trends showing donor government funding flattening, suggest that, at current rates of spending, it is unlikely to completely fill the gap. As such, global HIV targets may not be met unless other sources, including domestic public funding and the private sector, increase.

In 2015, funding disbursed by donor governments for HIV declined by more than US$1 billion, or 13%, compared to 2014.  While the decline is due to a complex set of factors, including issues of timing and exchange rate fluctuations, donor spending declined even after accounting for these factors.  As such, it marks the first decline in 5 years.  Whether this decline remains a single year event or a harbinger of more to come remains to be seen, although donor governments are facing many competing funding demands, including humanitarian emergencies and the refugee crisis, all against a backdrop of fiscal austerity in a number of countries.  With UNAIDS estimating that in- country resources for HIV, including from donor governments, will need to increase by at least US$7.2 billion by 2020 to put the world on a trajectory to end AIDS by 2030, it will be critical to monitor donor government spending going forward.