As world leaders meet to discuss the future of financing for development and to endorse new Sustainable Development Goals (SDGs) in the post-MDG era, the global community is taking stock of the progress made as well as the work that remains to be done, including in addressing the HIV epidemic. Since the establishment of the MDGs in 2000, through 2013 new HIV infections have decreased by almost 40% and the number of AIDS-related deaths has decreased by 35% since 2005.1 Still, in 2013, more than 2 million people were newly infected with HIV and 1.5 million died.1 In addition, new infections are rising in some parts of the world and some groups continue to be at disproportionately high risk for HIV and lack access to needed treatment and other interventions.1 As a result, a new UNAIDS Lancet Commission Report on Defeating AIDS calls for a significant ramping up of funding for AIDS efforts now, stating that “the next 5 years present a window of opportunity to scale up the AIDS response to end AIDS as a public health problem by 2030.”2 While the Commission notes that affected countries with financial capacity should fund more of their AIDS response, the need for international funding, particularly from donor governments, remains high. UNAIDS and the Kaiser Family Foundation have been tracking donor government assistance provided to address HIV in low- and middle-income countries since 2002.3 This report provides data from 2014, the latest available on their funding.

In 2014, disbursements for HIV totaled US$8.64 billion (see Figure 1 and Table 1), a less than 2 percent increase (US$149 million) above 2013 levels (US$8.49 billion). After adjusting for inflation, the increase was marginal (1%). In addition, increases in constant dollars over the past 10 year period were significantly less than increases in current dollar spending. Most of the overall increase in HIV support in 2014 can be attributed to the U.K., which increased both bilateral support and its contribution to the Global Fund. Without the U.K. increase, disbursements would have declined. In addition, contributions to the Global Fund, an increasing channel of support for a subset of donor governments over time; bilateral funding went down overall. Total funding from most other donor governments either declined or remained flat, including funding from the United States, the largest donor to HIV in the world, which was essentially flat in 2014 compared to 2013 (a less than 1% decrease).

International assistance for HIV includes both actual funding provided (e.g., cash transfers) as well as other types of transactions and activities (e.g., technical assistance) and products (e.g., commodities) (see Box 2). In 2014, the U.S. continued to be the largest donor in the world, accounting for approximately two-thirds (64.5%) of HIV disbursements by donor governments (See Table 1 and Figure 2). The U.K. was the second largest donor (12.9%), followed by France (3.7%), Germany (3.2%), and the Netherlands (2.5%). 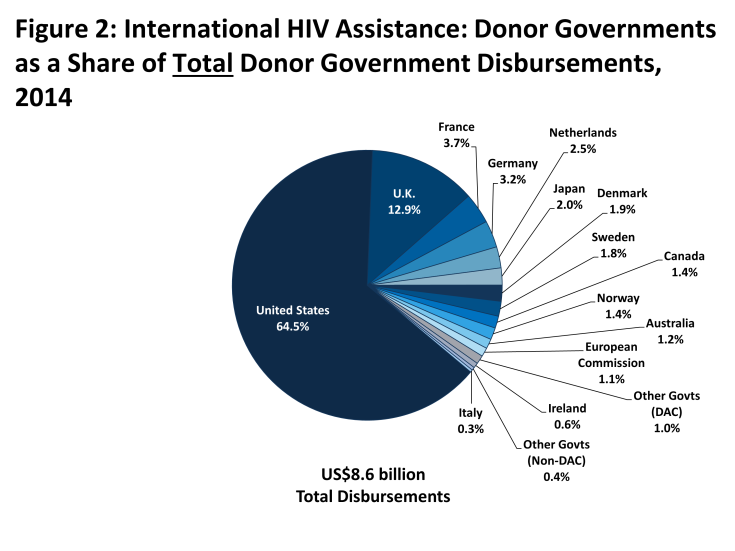 Funding from most donor governments assessed either decreased or remained flat. Seven (Australia, Canada, Denmark, France, Ireland, Sweden, and the European Commission) decreased HIV disbursements in 2014 and funding from two (Germany and the U.S.) was essentially flat. Five donor governments (Italy, Japan, the Netherlands, Norway, and the U.K.) increased total disbursements for HIV in 2014, although increases by Japan and the Netherlands follow prior declines and are still below earlier funding levels.

The majority of international assistance for HIV has historically been provided by a subset of donors (France, Germany, the Netherlands, the U.K., and the U.S.), with the U.S. consistently being the single largest (in both bilateral disbursements and contributions to the Global Fund). Since 2006, these five donors have accounted for approximately 80% or more of total assistance for HIV.

Assistance is provided by donor governments through both bilateral and multilateral channels, and some mix of the two (see Box 3). Decisions about how much assistance to provide through these different channels (what “mix” to use) are dependent on several factors, such as: the desired level of control over the use of funds by donors; varying approaches to cooperation and coordination; a donor’s own internal capabilities and field staff capacity for carrying out programs; and recipient country governance and capacity.

The majority of donor government assistance for HIV is provided bilaterally, although in recent years there has been a shift towards greater use of multilateral channels (see Figures 3 & 4): 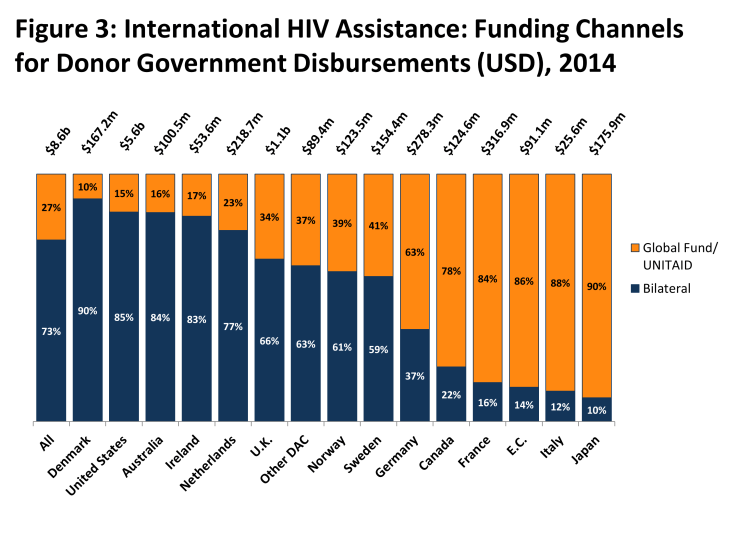 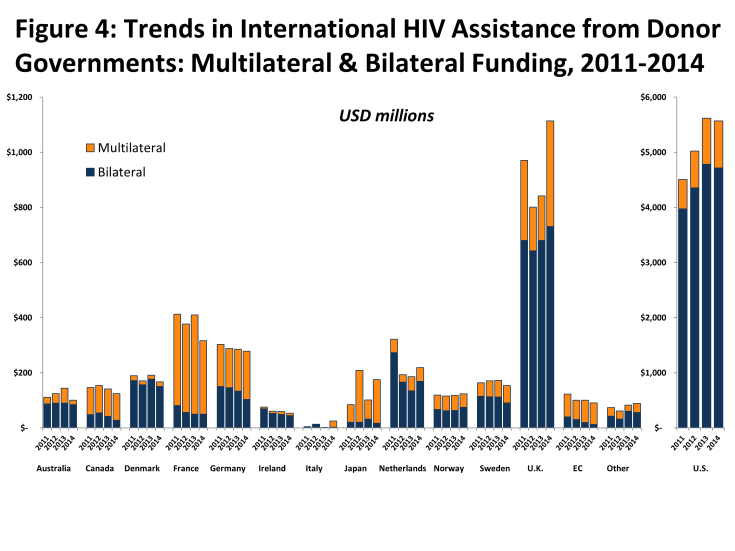 One question that often arises is what constitutes each government’s “fair share” of international HIV assistance efforts. Yet, such assessments are complex and there is no single, agreed-upon methodology for making them, and several questions must be considered, including:
These questions have implications for the methodology chosen to assess fair share and there are inherent limits in using any one methodology for doing so. For example, a rank by total funding does not capture the relative wealth of a nation. Yet a standardized measure including wealth does not take into account certain other donor policies that may inhibit or facilitate the amount of assistance such as tax subsidies for charitable giving. Table 2 provides several different comparative measures that could be used to assess fair share: 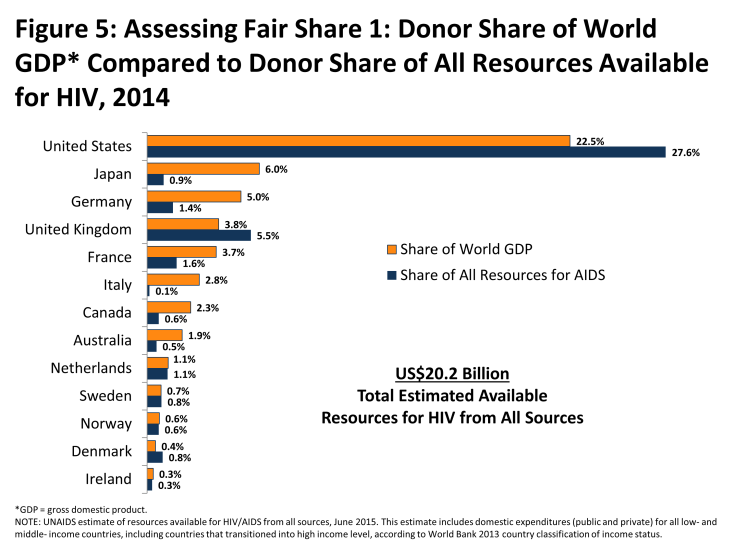 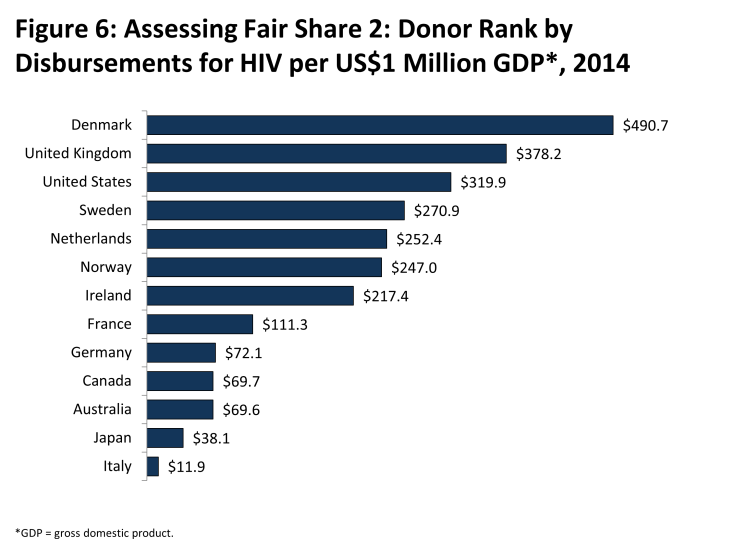 Funding from donor governments has played a significant role in the HIV response. With global resources from donor governments and all other sources reaching US$20.2 billion in 2014, and taking into account donor commitments for 2015 and increased domestic financing of the AIDS response, the world is close to meeting the target set by member states at the 2011 United Nations High Level Meeting (US$22-24 billion).9,10

In 2014, funding for HIV from donor governments increased slightly, though this was driven primarily by a single donor – the U.K., the second largest donor to HIV – without this increase, overall funding would have declined. This, combined with the fact that most donor government funding for HIV is still provided by the United States, indicates some vulnerability in the total donor government funding envelope. Future increases will largely depend on the U.K. and U.S. unless other donor governments are able to allocate additional resources for HIV. This is important as 2015 ushers in a new era for development, raising hard questions about competing priorities and financial resources. The quest to end AIDS as a public health threat by 2030 is squarely in the midst of this discussion. Having made tremendous gains and turning around the trajectory of the HIV epidemic in many parts of the world, there is still much more to be done and a continued need for donor financing to meet the challenge.