Using authority in the Affordable Care Act, the Centers for Medicare and Medicaid Services (CMS) has launched demonstrations that seek to improve care and control costs for people who are dually eligible for Medicare and Medicaid. Nearly 379,000 beneficiaries in nine states are enrolled in capitated models in these demonstrations as of November, 2015. Implemented beginning in July 2013, the demonstrations are changing the care delivery systems through which beneficiaries receive medical and long-term care services and the financing arrangements among CMS, the states, and providers. The demonstrations initially were approved for three years, but in July, 2015, CMS announced that states may extend their demonstrations for an additional two years. (New York’s demonstration for people with developmental disabilities (DD) is approved for four years.)

As of December, 2015, CMS has finalized memoranda of understanding (MOUs) with 13 states to implement 14 demonstrations: 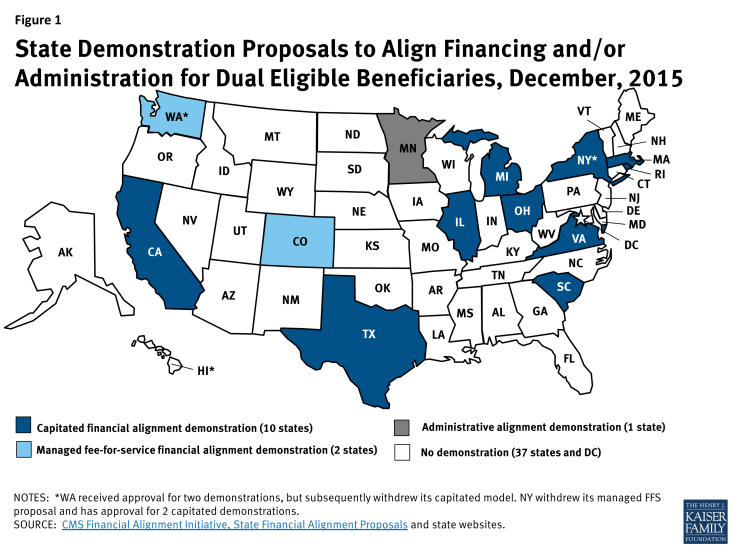 The status of past proposals from other states is detailed in the Appendix. This issue brief compares key provisions of the approved demonstrations, summarized in Table 1 on the next page.

Four states (Colorado, Minnesota, Rhode Island, and South Carolina) have statewide demonstrations, while the others are limited to certain regions.

Michigan and New York are the only states with capitated demonstrations to include both beneficiaries with DD and DD services. 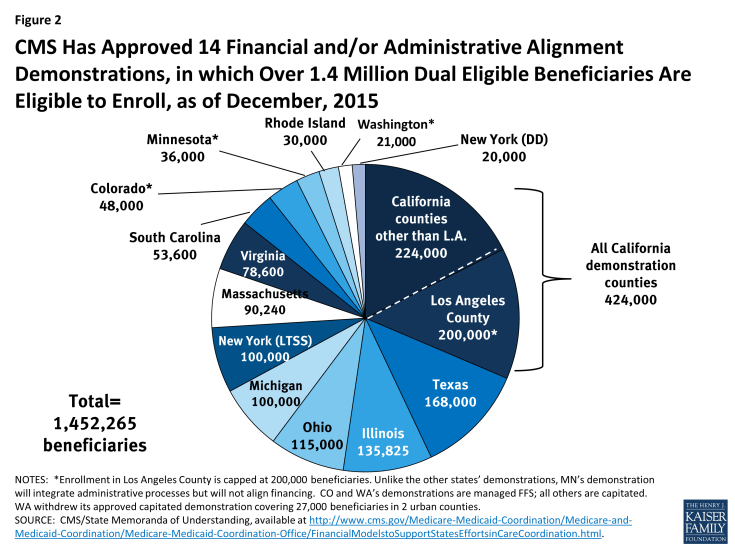 Figure 2: CMS Has Approved 14 Financial and/or Administrative Alignment Demonstrations, in which Over 1.4 Million Dual Eligible Beneficiaries Are Eligible to Enroll, as of December, 2015 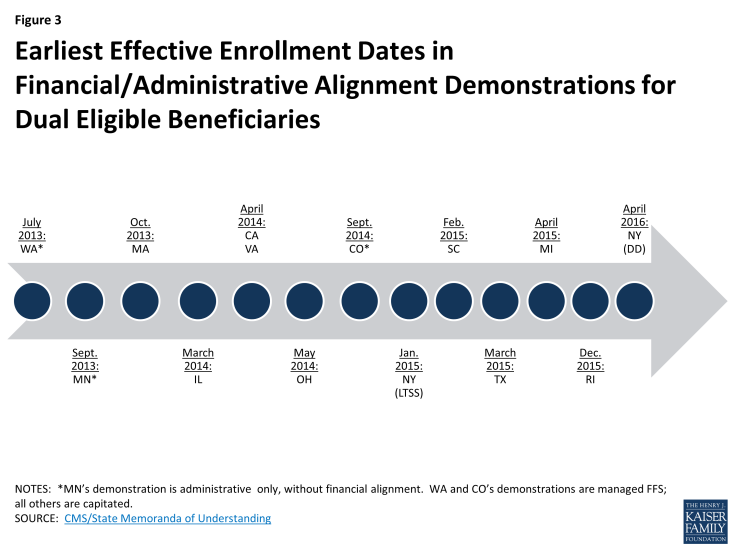 Given the complexities of the enrollment decision, beneficiaries are likely to need individual in-person options counseling to make their choice. Seven states (California, Illinois, Massachusetts, Michigan, New York, Virginia, and Washington) have received CMS funding to date to support beneficiary outreach, education, and options counseling in their demonstrations through their State Health Insurance Program and Aging and Disability Resource Centers.

In Washington’s managed FFS demonstration, beneficiaries are automatically enrolled in a health home network but retain the choice about whether to receive Medicaid health home services; other Medicare and Medicaid services will continue to be provided on a FFS basis. Similarly, in Colorado’s managed FFS demonstration, beneficiaries will be automatically assigned to the Regional Care Collaborative Organization in their geographic area to access care coordination services but may disenroll from the demonstration at any time.

All 10 states with capitated financial alignment demonstrations include provisions to withhold a portion of the capitated rate that plans can earn back if specified quality measures are met. California also requires its plans to provide incentive payments from the quality withhold funds to county behavioral health agencies based on achievement of service coordination measures, and Michigan requires its plans to reward the PIHPs that will provide behavioral health services when the plan earns the withheld payment. South Carolina plans must provide financial incentives to providers that achieve NCQA patient-centered medical home certification.

Two states (Colorado and Washington) are testing CMS’s managed FFS model in which providers will continue to receive FFS reimbursement for both Medicare and Medicaid-covered services. Any savings in these demonstrations will be determined retrospectively, with the state eligible to share in savings with CMS if savings targets and quality standards are met.

The 10 states with capitated financial alignment demonstrations include nearly all Medicare and Medicaid services in the plans’ benefits package and capitated payment. All states include nursing facility services in the plans’ capitated payment and benefits package. Eight of the 10 states testing the capitated model (Illinois, Michigan, New York (both demonstrations), Ohio, South Carolina, Rhode Island, Texas, and Virginia) include beneficiaries who receive certain Medicaid home and community-based waiver services, while two states (California and Massachusetts) exclude all HCBS waiver enrollees from their demonstrations. Plans are allowed to offer additional benefits, outside the traditional Medicare and Medicaid benefits packages, as appropriate to beneficiary needs. All states require their health plans to offer beneficiaries the option to self-direct their LTSS (Table 3).

Minnesota’s administrative alignment demonstration will continue to provide Medicare benefits at least equivalent to the basic benefit levels included in Medicare Parts A, B, and D and Medicaid benefits based on existing Medicaid MCO contracts.

CMS has announced a funding opportunity for states with approved MOUs to support the planning, development, and provision of independent ombudsman services in the demonstrations, with ten states (California, Colorado, Illinois, Massachusetts, Michigan, Ohio, Rhode Island, South Carolina, Virginia, and Washington) awarded funding to date. Seven states (Colorado, Illinois, Michigan, Ohio, South Carolina, Texas, and Washington) are using an ombuds office within state government, although independent of the state Medicaid agency, while four states (California, Massachusetts, New York, and Virginia) are using an ombuds entity outside of state government. Minnesota’s MOU provides that the state’s managed care ombudsman will provide input on plan and system-wide performance but does not provide further details.

All of the capitated demonstrations provide beneficiaries with a single integrated notice of appeal rights, and the existing Medicare Part D appeals process for prescription drugs will continue to apply in all demonstrations. Minnesota’s administrative alignment demonstration is building on the integrated appeals system already established in its Senior Health Options program by adding a single integrated notice of appeal rights and standardizing the timeframes to request Medicare and Medicaid appeals. By contrast, Colorado and Washington’s managed FFS demonstrations do not make any changes to the existing Medicare and Medicaid appeals systems.

New York’s two capitated financial alignment demonstrations  include a fully integrated four level appeals process for all services traditionally covered by Medicare Parts A and B and Medicaid. New York requires its demonstration health plans to continue providing benefits while appeals are pending for both prior-approved Medicare and Medicaid services if the beneficiary so requests within 10 days of the date of the notice. (Continued benefits pending appeal is currently available under federal law for Medicaid services but not for Medicare services.)

Five of the capitated demonstration states (Illinois, Massachusetts, Rhode Island, South Carolina, and Virginia) require beneficiaries to first exhaust an internal health plan appeal before proceeding to external appeals, while four of the capitated demonstration states (California, Michigan, Ohio, and Texas) allow beneficiaries to choose whether to first file an internal health plan appeal or instead to proceed directly to a fair hearing for Medicaid-covered services.

All of the capitated demonstrations require health plans to continue Medicare and Medicaid benefits while internal health plan appeals are pending; beneficiaries may request that Medicaid benefits continue while fair hearings are pending, but Medicare benefits will not continue during external appeals. (California’s aid pending appeal provision is contained in its three-way contract instead of its MOU.)  California’s MOU provides that the existing Medicare and Medicaid appeals processes will continue at least through demonstration year one, and the state will work to create a more integrated appeals process in future years.

The approved MOUs provide additional information about how CMS and the states envision the demonstrations working and insight into the framework and policy decisions that CMS may apply when developing MOUs with other states that submitted proposals. Additional details are specified in the three-way contracts between CMS, the state, and demonstration plans in the capitated model, in the states’ final demonstration agreement with CMS in the managed FFS model, and in policy guidance. Key areas to continue to consider as the demonstrations are implemented include:

While the demonstrations offer the potential opportunity to improve care coordination, lower program costs, and achieve outcomes such as better health and the increased use of HCBS instead of institutional care, at the same time the high care needs of many dual eligible beneficiaries increases their vulnerability when care delivery systems are changed.