Early Impacts of the Medicaid Expansion for the Homeless Population

One of the key goals of the ACA is to expand coverage and reduce the number of uninsured. A primary way the ACA seeks to reduce the number of uninsured is by expanding Medicaid to low-income adults (with incomes at or below 138% of the federal poverty level or $16,105 for an individual or $27,310 for a family of three as of 2014) who were historically ineligible for the program. As enacted, this expansion would occur in all states as of January 1, 2014. However, the Supreme Court ruling on the ACA effectively made the expansion a state option. As of November 2014, 28 states, including DC, are implementing the expansion.

The Medicaid expansion offers a particularly significant opportunity to increase coverage and improve access to care for individuals experiencing homelessness, who historically have had very high uninsured rates and often have multiple, complex physical and mental health needs. A prior brief examined how homeless health care providers were preparing for the Medicaid expansion and their anticipated impacts of the expansion.1 This brief builds on that previous work to identify early impacts of the expansion for homeless providers and the patients they serve as well as key priorities for meeting the health care needs of the homeless population looking ahead. While the findings are focused on the homeless community, they offer insights that may help inform understanding of how coverage gains are impacting the broader low-income population.

Overview of the Homeless Population

Each year, millions of people experience homelessness in the U.S. Though the total number is unknown, the U.S. Department of Housing and Urban Development (HUD) found that 1.48 million people stayed in emergency shelters or transitional housing in 2012.2 However, this estimate excluded individuals who avoided the shelter system, used privately funded shelters not part of HUD’s Continuum of Care network, or who stayed with friends and families to avoid the streets. On a single night in January 2013, HUD estimated 610,042 people were homeless in the U.S., of which 64% were individuals and 36% were part of families.3 This estimate also undercounts the number of people who are homeless, but represents the best attempt to collect national data across all states.

People who are homeless have high rates of both chronic disease and acute illnesses, with many of these conditions associated with and/or exacerbated by their living situations. There is a wide body of literature on the health status and conditions of homeless persons, which shows that they have a broad range of mental health and substance use needs that often are co-occurring with physical conditions.4,5 Higher exposure to violence, malnutrition, and extreme weather are additional risk factors for poor health and premature death.6, 7 Often because of poor health and lack of housing, this population also frequents emergency rooms and hospitals more often than the general public, and has high rates of readmissions.8

Prior to Medicaid expansion, homeless individuals were uninsured at high rates even when compared to other low-income groups. Of the 851,641 patients served by Health Care for the Homeless grantees in 2013,9 57% were uninsured, compared to 35% uninsured patients served at all health centers and over four times the rate of the general population (Figure 2).10,11 Despite having access to outpatient primary care and behavioral health services at health centers and other safety net venues, lack of health insurance has prevented this population from accessing the broader range of services needed to address their health conditions, such as specialty care, residential treatment, and surgeries. Being uninsured has also prevented a more systemic analysis of their utilization and cost of care given the lack of coordinated data available through insurers. Finally, connecting this particularly vulnerable group to health insurance is important for the providers who serve them, as they have traditionally relied on unpredictable grant funding and limited pro bono services in the community. 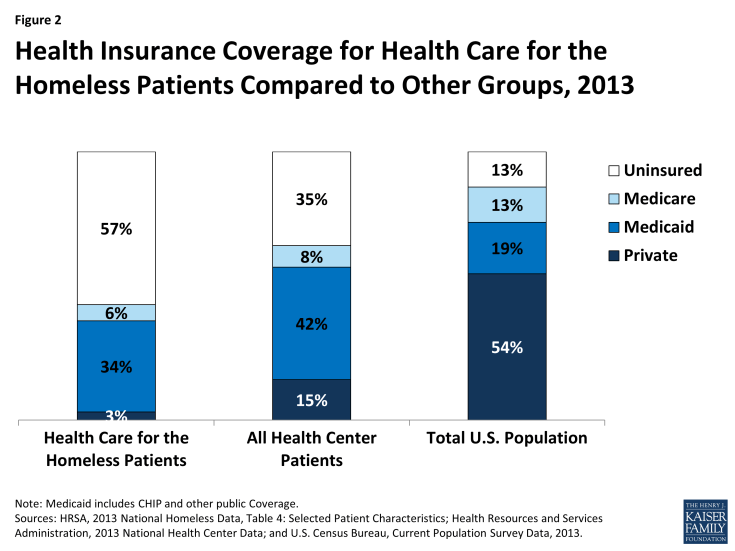 Figure 2: Health Insurance Coverage for Health Care for the Homeless Patients Compared to Other Groups, 2013

To gain insight into the early impacts of the Medicaid expansion for the homeless community, the National Health Care for the Homeless Council  and the Kaiser Commission on Medicaid and the Uninsured conducted focus group discussions with staff and community partners at federally qualified health centers that serve individuals experiencing homelessness at four sites in states that have expanded Medicaid (Albuquerque, NM; Baltimore, MD; Chicago, IL; and Portland, OR). Focus groups were also conducted at a site in Jacksonville, FL to gain insight into experiences in a state that has not expanded. In addition, health coverage and administrative data were collected from each of the sites to supplement the focus group findings. See Appendix Table 1 for and overview of the data.

Overall, a total of 118 professionals participated in 14 focus groups held between July and September 2014. Three focus groups were held in each of the four expansion sites—one composed of frontline outreach and enrollment workers, another composed of administrators and finance staff, and the third consisting of clinicians, case managers and other service providers. In Jacksonville, Florida, two focus groups were held—one with administrators, finance staff and clinicians, and another with frontline outreach and enrollment staff.