At the London Summit on Family Planning (FP2020), the global community made commitments totaling US$2.6 billion in additional funding for family planning by 2020 (see Box 1). With the commitment period of several donors coming to an end in 2015 and with 2016 marking the halfway point towards fulfillment of the FP2020 goals, it is important to assess the progress made as well as plans moving forward. The status of global funding for family planning takes on added relevance as donors navigate additional budgetary and other pressures, including the ongoing refugee crisis and other competing demands, as well as the effects of Brexit.

This report provides an analysis of donor government bilateral funding for family planning activities in 2015 compared to prior year levels. It includes data from the 29 governments who were members of the Organisation for Economic Co-operation and Development (OECD), Development Assistance Committee (DAC) in 2015.5 Data were collected directly from ten donors, who represent approximately 99% of bilateral family planning funding, and are profiled in this report: Australia, Canada, Denmark, France, Germany, the Netherlands, Norway, Sweden, the U.K., and the U.S. Data for the remaining DAC members was obtained from the OECD Credit Reporting System (CRS). For purposes of this analysis, family planning services were defined to include the following activities as specified in the CRS: “counseling; information, education and communication (IEC) activities; delivery of contraceptives; capacity building and training.”6 Bilateral totals include actual funding amounts provided (e.g., cash transfers) as well as other types of transactions and activities (e.g., technical assistance), products (e.g., commodities), and donor government earmarked contributions to multilateral organizations (e.g. contributions to the Global Programme to Enhance Reproductive Health Commodity Security at UNFPA).

In 2015, donor governments disbursed7 US$1,344.0 million in bilateral funding for family planning activities (see Table 1, Figure 1 & Appendix 1), essentially flat compared to 2014 when measured in real terms (adjusting for the effects of exchange rate fluctuations and inflation). However, when measured in current U.S. dollars, 2015 was a decrease of US$88.6 million (-6%) below 2014 levels (US$1,432.7 million) and essentially a return to 2013 levels (US$1,325.0 million). The decline, when measured in current U.S. dollars, is due to a complex set of factors, primarily the significant appreciation of the U.S. dollar in 2015, which resulted in the depreciation of most other donor currencies, but also to real declines (in currency of origin) by several donors. Among the donors profiled, five (Denmark, France, Germany, the Netherlands, and Sweden) actually increased FP funding in 2015 – when measured in their currencies of origin, while funding from three donors (Australia, Norway, and the U.K.) declined. Funding from two donors (Canada and the U.S.) remained flat. Despite the decline in 2015 compared to 2014, donor government bilateral assistance for family planning is still approximately US$250 million above the 2012 baseline (US$1,093.6 million). 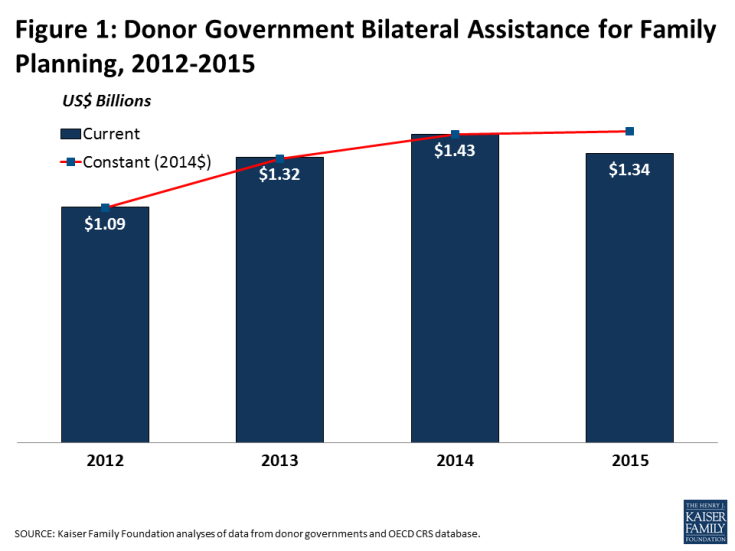 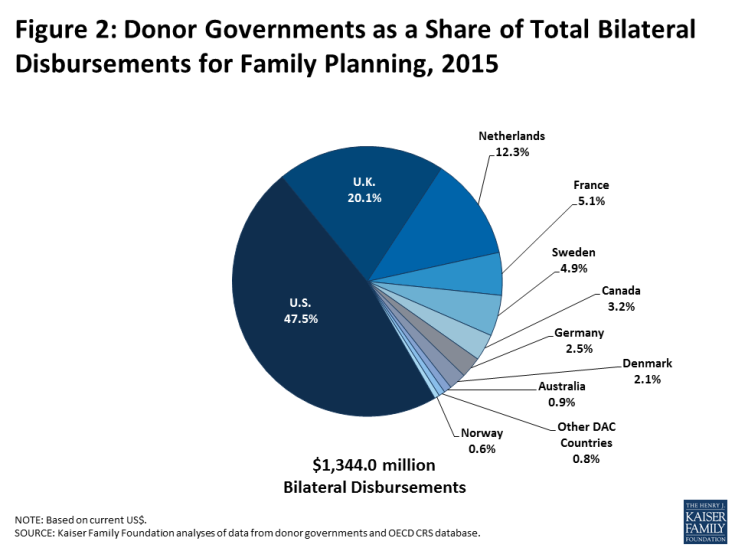 Figure 2: Donor Governments as a Share of Total Bilateral Disbursements for Family Planning, 2015

While the majority of donor governments increased family planning funding between 2012 and 2015, recent trends have been largely driven by the two largest donors, the U.S. and U.K., which have accounted for approximately two-thirds of total funding over the period.

While the majority of donor government assistance for family planning is provided bilaterally, donors also provide support for family planning activities through contributions to the United Nations Population Fund (UNFPA) (see Box 3).8 Most of UNFPA’s funding is from donor governments, which provide funding in two ways: 1) donor directed or earmarked contributions for specific activities (e.g. donor contributions to the Global Programme to Enhance Reproductive Health Commodity Security at UNFPA), which are included as part of bilateral funding; and 2) general contributions to “core” activities that are untied and meant to be used for both programmatic activities (family planning, population and development, HIV-AIDS, gender, and sexual and reproductive health and rights) and operational support as determined by UNFPA.

In 2015, donor governments provided US$392.6 million in core contributions to UNFPA, a decrease of US$78.9 million (-17%) below 2014 levels (US$471.5 million). Similar to bilateral funding, much of this decline can be attributed to the appreciation of the U.S. dollar. In fact, when measured in the currency of origin, all of the donors profiled essentially maintained their contribution to UNFPA’s core resources at the prior year level, with the exception of Denmark, which increased funding. Sweden provided the largest core contribution to UNFPA in 2015 (US$57.4 million), followed by Norway (US$55.6 million), the Netherlands (US$39.7 million), and Denmark (US$35.7) (see Figure 3 and Table 2).10 Among the ten donors profiled, two provided a larger contribution to UNFPA’s core resources than their total bilateral disbursement for family planning: Denmark and Norway. 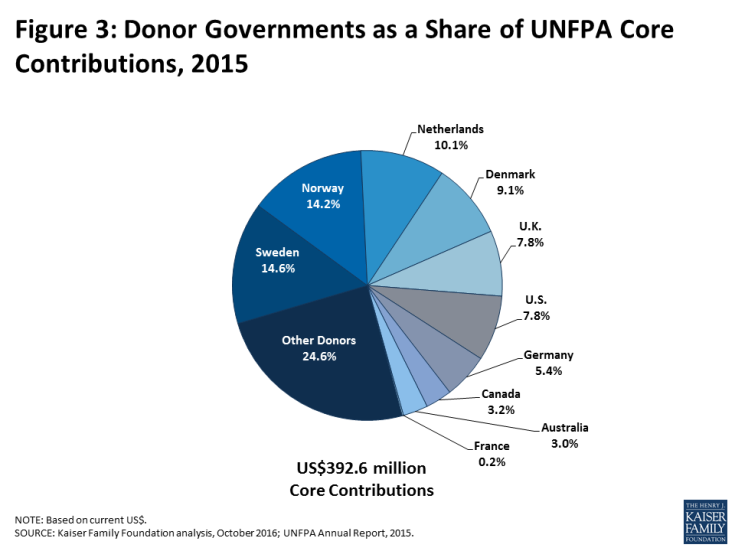 Figure 3: Donor Governments as a Share of UNFPA Core Contributions, 2015

After several years of funding increases since the 2012 London Summit on Family Planning, donor government funding for family planning was essentially flat in 2015 in real terms, and fell when measured in current U.S. dollars.  While the decline was primarily driven by the appreciation of the U.S. dollar, some donors did reduce funding, as measured in their currencies of origin.  At the same time, seven of the eight profiled who made commitments at the London Summit, have either fulfilled or are on track towards fulfilling their commitments. Still, as donor commitment periods come to an end and given the uncertainty associated with the value of the U.S. dollar, it is unclear what the scope of support for family planning will be going forward.