Michigan and Indiana are among the seven states using a Section 1115 demonstration waiver to implement Medicaid expansions in ways that differ from the terms of the Affordable Care Act (ACA).1 The ACA expands Medicaid to nearly all non-elderly adults with income up to 138% of the federal poverty level (FPL, $16,394 per year for an individual in 2016), as of January, 2014, although the Supreme Court’s ruling on the ACA’s constitutionality effectively made the expansion optional for states.  The law also provides 100% federal funding for the expansion through 2016, declining gradually to 90% in 2020 and thereafter.2 Twenty-five of the 32 states adopting the Medicaid expansion as of December, 2016 have done so through traditional state plan authority, as envisioned by the ACA, with the Obama Administration approving waivers in the remaining seven states.

While each waiver is unique, Michigan and Indiana’s waivers include some similar provisions.  Appendix Table 1 lists the specific waiver authorities granted in each state.  Some of these features are not found in other waivers approved to date, although additional states have expressed interest in pursuing similar models. This issue brief explains key components of Michigan and Indiana’s waivers and presents findings based on the two states’ early implementation experiences.  The findings are based on 22 in-person and telephone interviews conducted in July and August, 2016 with state officials, providers, health plans, beneficiary advocates, and enrollment assistors in Michigan and Indiana, and incorporate data and reports from the state Medicaid agencies and other publicly available sources. We also conducted four focus groups (two in each state) with beneficiaries enrolled in waiver coverage to learn about their firsthand experiences.

What are the Key Provisions in Michigan and Indiana’s Medicaid Expansion Waivers?

Programs in Place Prior to Medicaid Expansion

To understand Michigan and Indiana’s waivers, it is important to also understand the scope of Medicaid coverage in these states before they implemented the ACA’s Medicaid expansion.  Under federal law before the ACA, adults without dependent children only could be covered through Section 1115 demonstrations, which required states to achieve savings in other areas so that federal Medicaid matching funds could be used to expand coverage.  The ACA creates a new eligibility pathway and authorizes federal matching funds for these adults, eliminating the need for waiver authority and budget savings to provide coverage.  Prior to 2014, Michigan and Indiana both had established limited coverage expansions through Section 11115 waivers:  Michigan provided a limited benefit package to childless adults up to 35% FPL, and Indiana provided a limited benefit package with a high deductible health account to parents and a capped number of childless adults up to 100% FPL, called HIP 1.0.

Under federal law, Medicaid beneficiaries with income below 150% FPL cannot be charged premiums, and premium payments cannot be required to effectuate coverage.  Instead, coverage is effective as of the application date with retroactive coverage for medical bills incurred up to 90 days prior to application.  Michigan and Indiana both obtained waiver authority to impose premiums on beneficiaries with income from 100-138% FPL, and Indiana obtained additional waiver authorities to alter the effective date of coverage.

In Michigan, expansion adults with income from 100-138% FPL ($990-$1,366 per month for an individual in 2016) pay monthly premiums of 2% of income (about $20 to $27/month) into health accounts (Figure 1).  Failure to pay premiums does not result in a loss of Medicaid eligibility, but past due premiums can be recouped from state income tax refunds or lottery winnings. Michigan’s application and enrollment process was not changed by its waiver. Beneficiaries can enroll in coverage after being determined eligible, and no premium payments are due until after six months of enrollment (Figure 2).  Additionally, Michigan applies the federal rule that provides for coverage of medical bills incurred up to 90 days prior to Medicaid eligibility. 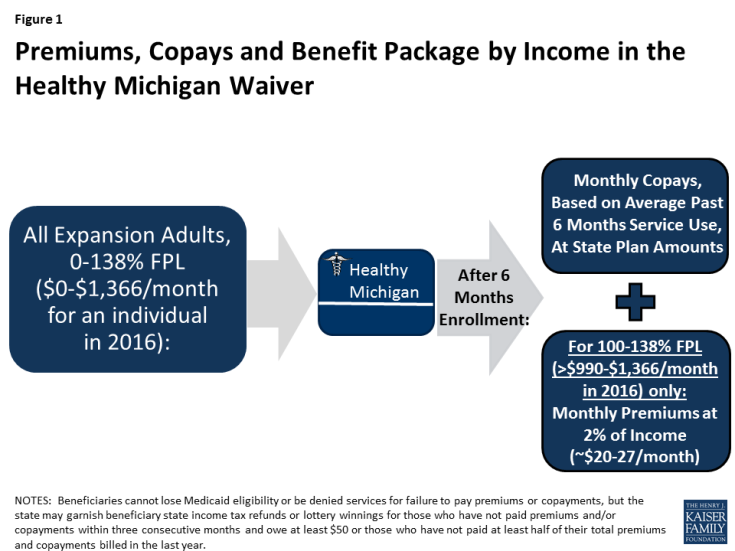 Figure 1: Premiums, Copays and Benefit Package by Income in the Healthy Michigan Waiver 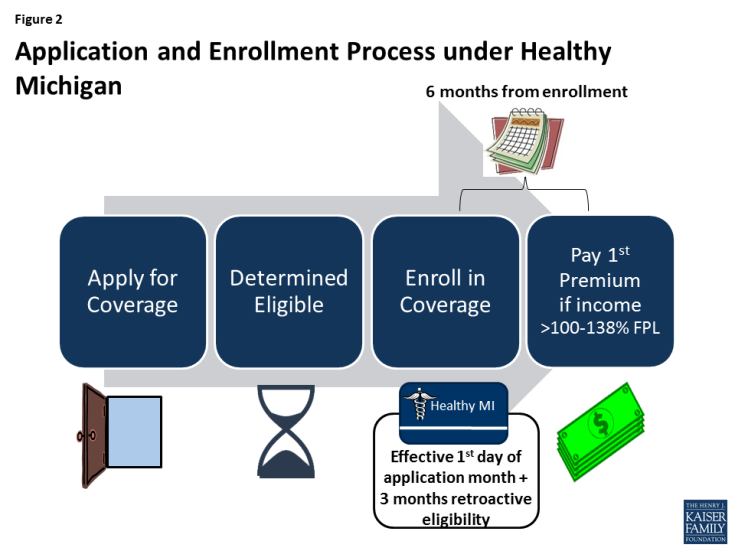 In Indiana, premiums are 2% of income for all beneficiaries under the waiver, except that those with incomes from 0-5% FPL (up to $50/month in 2016) pay a flat $1.00/month (which is greater than 2% of income for those below 5% FPL) (Figure 3).  Premiums are paid into a Personal Wellness and Responsibility (POWER) health account.3

Non-medically frail expansion adults with incomes from 100-138% FPL must pay a premium to effectuate coverage, and those who fail to pay premiums within 60 days are disenrolled and locked out of coverage for six months.  Coverage for expansion adults from 0-100% FPL does not begin until payment of a premium or the expiration of the 60-day premium payment period.  Expansion adults from 0-100% FPL who fail to pay premiums within 60 days are moved to a more limited benefit package (HIP Basic, without dental and vision benefits and with more limited prescription drug coverage) and incur point-of-service copayments. Unlike in traditional Medicaid, there is no retroactive coverage for expansion adults.

Unlike Michigan, some traditional Medicaid populations also are covered under Indiana’s waiver.  These include mandatory parents (whose eligibility is based on income thresholds associated with the former AFDC cash assistance program under Section 1931), 19 and 20 year olds, and those who are moving from welfare to work and eligible for Transitional Medical Assistance).  These groups can choose whether to pay monthly premiums or point-of-service copayments; in either case, they receive the traditional Medicaid state plan benefit package (with vision and dental) instead of the more limited HIP Basic benefit package for expansion adults from 0-100% FPL who do not pay premiums.  Coverage for these groups begins with payment of a premium or after the expiration of the 60-day premium payment period (Figure 4). 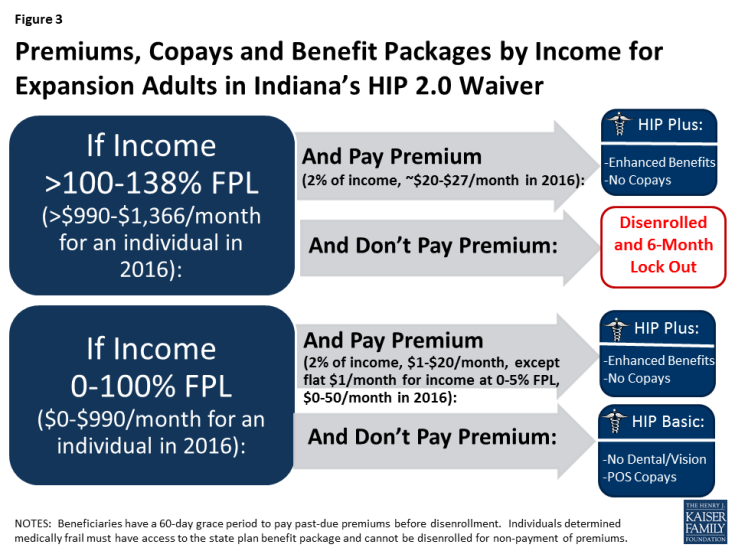 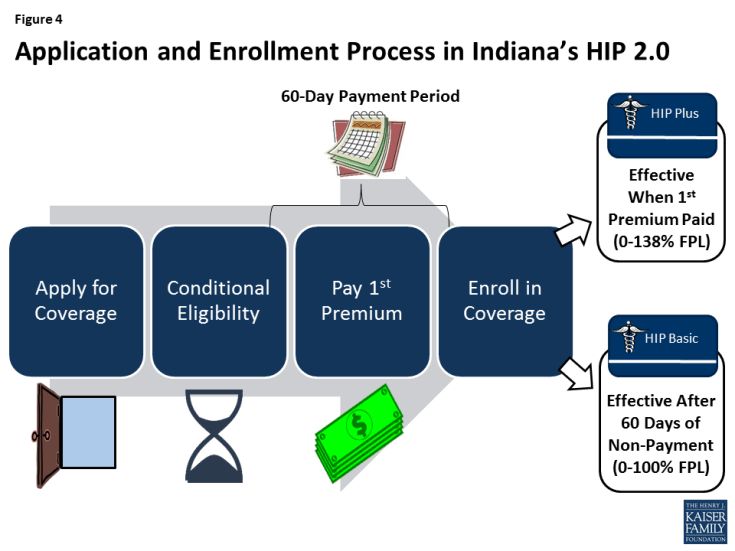 There are policies in Indiana’s waiver intended to help reduce delays in effectuating coverage, including the Fast Track premium pre-payment option (Figure 5) and an expanded presumptive eligibility program (Figure 6).  In addition, the prior claims payment program seeks to control the impact of the elimination of retroactive eligibility on traditional adults who are subject to the waiver and have incurred medical bills within the three months prior to application. 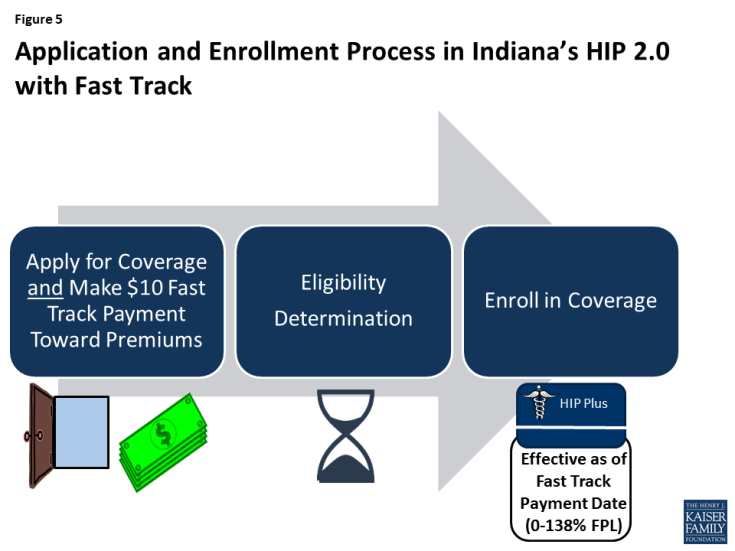 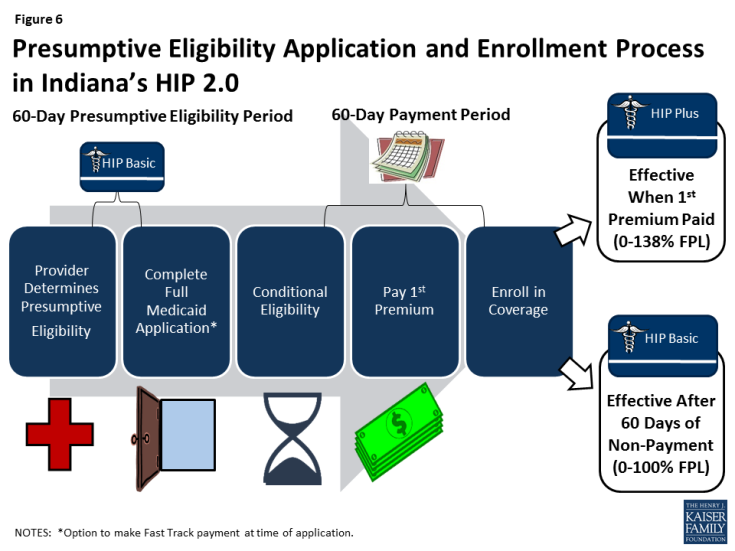 Federal law allows states to charge nominal copayments for certain services, including up to $8 per visit for non-emergency ER use, and all Medicaid cost-sharing is subject to a cap of 5% of family income.  In Michigan, all expansion adults make monthly payments into health accounts based on their average copayments, at state plan amounts, for services used in the previous six months. Failure to pay copayments does not result in a loss of Medicaid eligibility, but past due copayments can be recouped from state income tax refunds or lottery winnings.  In Indiana, those who pay premiums only have copayments for non-emergency use of the ER.  Expansion adults with incomes from 0-100% FPL who fail to pay premiums receive the more limited benefit package and must make point of service copayments.  HIP 2.0 also includes a two-year demonstration to test whether graduated copayments ($8 for first visit and $25 for subsequent visits in the same year) discourage non-emergency use of the ER.

Both Indiana and Michigan have provisions in their waivers related to health accounts. Traditional health savings accounts are linked with high deductible health plans and allow individuals to contribute tax-free funds that can be used to cover medical expenses. The health accounts in Indiana and Michigan’s waivers do not have all of these features.  For example, beneficiary contributions are not pre-tax, and beneficiaries receive medically necessary care from capitated Medicaid health plans without regard to a traditional deductible.  In Michigan, all care is provided by health plans in exchange for capitation payments.  In Indiana, health plans provide care in exchange for capitation payments once the deductible funds are exhausted,4 and most of the $2,500 deductible is funded by the state with the remainder funded by beneficiary premiums.  Michigan requires its health plans to contract with a single third party vendor to administer the accounts, while the accounts are administered directly by the health plans in Indiana.

Both Michigan and Indiana also have healthy behavior incentive programs.  In Michigan, compliance with specified healthy behaviors results in a 50% reduction in future premiums for those above poverty and a $50 gift card for those below poverty.  All beneficiaries who comply with healthy behaviors have future monthly copayments in excess of 2% of income reduced (Figure 7). In Indiana, beneficiaries who pay premiums timely can rollover their share of the unused POWER account balance at the end of the year to apply to the next year’s premiums. The rollover balance is doubled by the state for those who receive certain preventive services as a healthy behavior reward. Those who have not paid premiums but receive preventive services can rollover account funds to apply to 50% of the amount of the next year’s premiums (Figure 8). 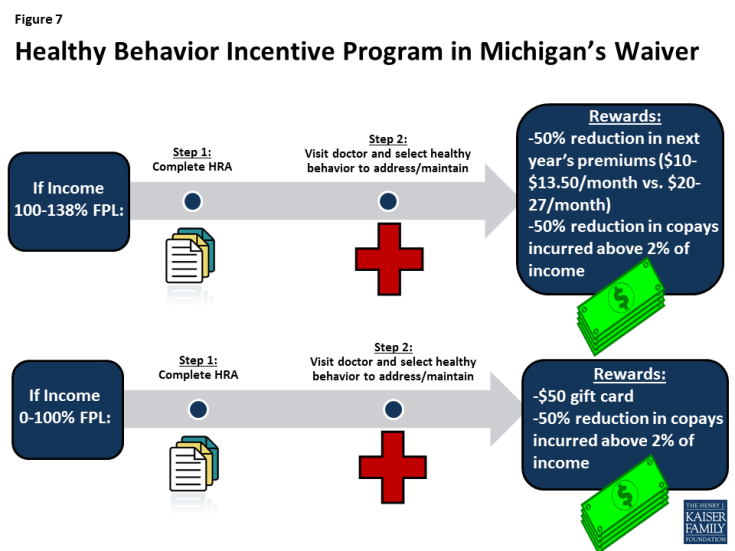 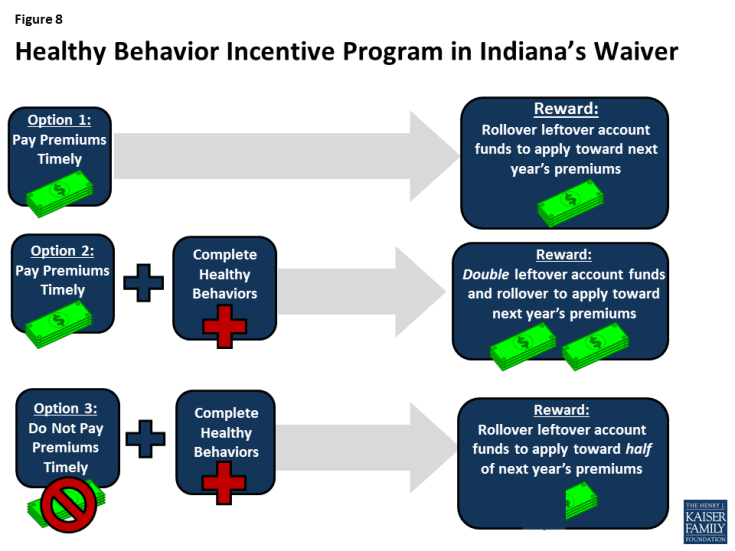 Other Key Provisions in Indiana’s Waiver

Non-Emergency Medical Transportation (NEMT). Indiana received a time-limited waiver of the responsibility to provide NEMT to non-medically frail expansion adults, which CMS subsequently extended through the end of the demonstration.5  Medically frail expansion adults and mandatory parents, 19 and 20 year olds, and those eligible for Transitional Medicaid Assistance receive NEMT.

Gateway to Work.  Indiana offers a voluntary state-funded work referral program, which is not part of the HIP 2.0 waiver terms and conditions.  To date, HHS has not approved waiver requests that would require work as a condition of Medicaid eligibility.