On November 7, 2018, a day after the 2018 midterm elections, the Trump Administration issued a proposed regulation to address “Exchange Program Integrity.” A major element of this proposed rule would affect insurers, consumers, and state insurance regulators in the states that either allow or require abortion coverage. The Affordable Care Act (ACA) allows states to ban plans from offering abortion as a benefit on their Qualified Health Plans (QHPs) and requires plans that cover abortion to segregate policyholder payments for abortion coverage from all other premium charges.

The Trump administration acknowledges the new proposed regulation will be confusing for consumers and burdensome to issuers, but believes it is more consistent with “congressional intent” and is a “better implementation” of the ACA’s statutory requirement for separate payments. If finalized, these proposed rules could disrupt coverage for many consumers, place administrative and reporting requirements on issuers, and add new oversight responsibilities for state insurance regulators. Furthermore, this proposed regulation will likely result in plan decisions to eliminate abortion coverage from their policies in order to avoid additional administrative requirements, placing the costs of abortion care directly on women enrollees and potentially limiting their access to these services. These impacts are not surprising; the rule is consistent with ongoing Congressional and Trump Administration efforts to limit the number of abortions in the U.S. This brief provides an overview of current ACA-related abortion coverage policies and analyzes the potential impact of the proposed changes.

The ACA requires all QHPs to provide coverage for 10 Essential Health Benefits (EHB), but prohibits abortion services from being included as an EHB. States may ban plans offered through the ACA Marketplace from covering any abortions–even if the pregnancy is a result of rape or incest or a threat to the woman’s life as permitted under the Hyde Amendment. Since the ACA was implemented, 26 states have banned abortion coverage on their ACA Marketplace (Figure 1). 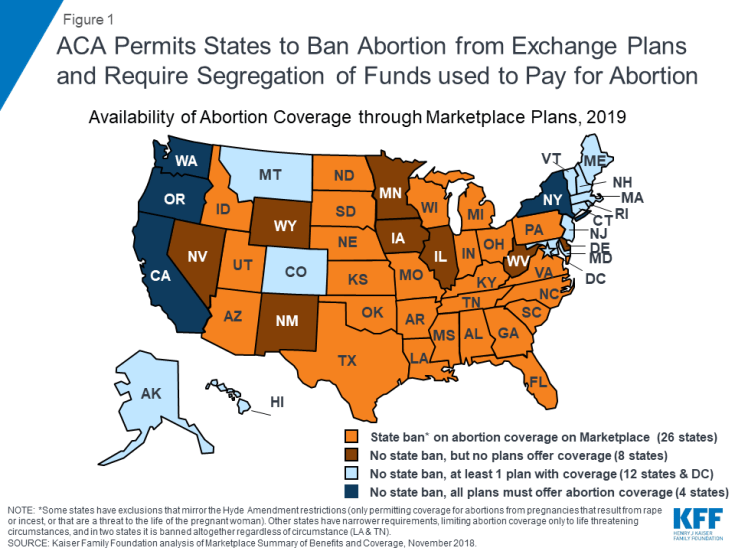 Figure 1: ACA Permits States to Ban Abortion from Exchange Plans and Require Segregation of Funds used to Pay for Abortion

The ACA and the relevant regulatory section  requires plans that offer coverage for abortion beyond Hyde limitations to segregate the federal funds used to subsidize premium costs for the EHBs from the premiums costs that pay for that coverage. Plans must collect a separate payment for abortion coverage and notify consumers regarding the inclusion or exclusion of abortion in the Summary of Benefits and Coverage at enrollment. Any plan that includes coverage of abortions beyond Hyde limitations must estimate the actuarial value of such coverage by taking into account the cost of the abortion benefit, but it must be valued at least $1 per enrollee per month. This estimate cannot take into account any savings that might be achieved as a result of the abortions (such as the savings of not paying claims for prenatal care, delivery or postnatal care).

In 2015, the Obama Administration provided guidance on how this statute should be implemented, allowing options that simplified the billing and payment process for plans that include abortion coverage yet kept funds segregated. They allowed insurers to send “the enrollee a single monthly invoice or bill that separately itemizes the premium amount for non-excepted abortion service” or “sending the enrollee a notice at or soon after the time of enrollment that the monthly invoice or bill will include a separate charge for such services and specify the charge.”

In October 2017, the Trump Administration issued a bulletin reinforcing the 2015 notice. They also indicated that CMS would fully enforce the requirements related to abortion coverage in the Federally Facilitated Exchange (FFE) and, if states failed to require compliance in plans offered by the State-Based Exchanges (SBE), CMS would step in. In August 2018, 101 members of Congress signed a letter to Secretary Alex Azar stating their dissatisfaction with the Obama Administration policy, and urging the Trump Administration to issue new regulations that they believe were needed to reflect the intent of the law.

What do the new regulations propose?

On November 7, 2018, the Trump Administration issued a proposed regulation addressing exchange program integrity and proposed significant changes to how issuers must bill and consumers should pay for non-Hyde abortion coverage in Marketplace plans that include abortion coverage. HHS takes the position that the current regulations do “not adequately reflect…Congressional intent that the QHP issuer bill separately for two distinct (that is “separate”) payments as required by Section 1303 of the PPACA.”

Under the proposed rule:

How could the new proposed regulations affect enrollees and insurers?

Consumers enrolled in 24 States and DC will potentially be affected, but the impact would be greatest for the enrollees who live in the four states that mandate abortion coverage and in the additional 12 states that offer plans with coverage. HHS estimates that 1.3 million enrollees to Marketplace plans will be impacted by the regulation. There are, however, 3.1 million enrolled who will be potentially impacted (Table 1), 2.0 million enrollees alone in states (CA, NY, OR, WA) which require all plans to cover abortion services (Figure 2). There are an additional 1.1 million enrollees in 12 other states and DC that include abortion coverage in their Marketplace plans. HHS estimates that consumer costs will total $30.8 million, but do no factor in the costs to consumers of a separate mailing nor potential loss of coverage. 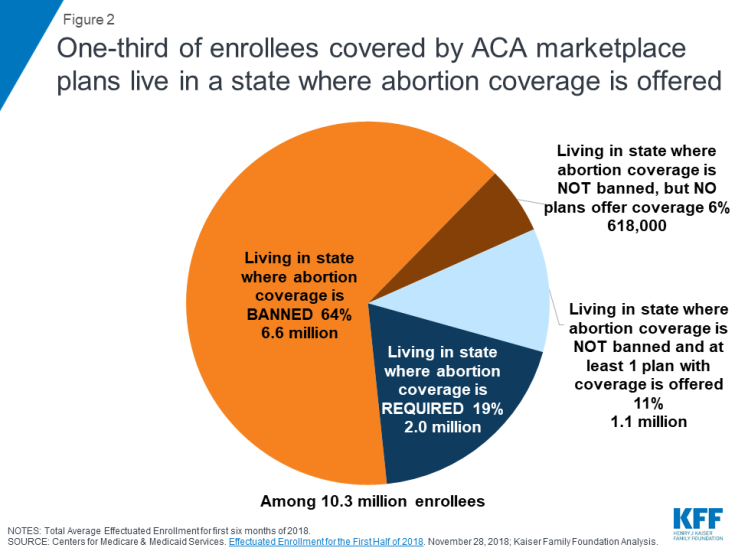 Figure 2: One-third of enrollees covered by ACA marketplace plans live in a state where abortion coverage is offered

Some consumers will likely be confused by the requirement to receive two invoices for the same insurance policy every month, and to pay two separate payments each month. The proposed regulation acknowledges that sending policyholders two separate bills would cause confusion because they might not understand why they are getting two different bills and why they need to make these payments separately. However, HHS has said that asking consumers to send separate payments will “help reduce consumer confusion about receiving two separate bills in a single envelope.”

Men and women who are beyond their reproductive years are most likely to be confused about the separate bill for abortion coverage, a health service they do not need. They may think the abortion coverage is a rider and not part of their plan, and decide not to pay the $1 without recognizing that they are making incomplete payments on their full insurance. Abortion coverage is not a rider. In fact, the CMS prohibits plans from selling any coverage riders on the Marketplace and a recent review of insurance plans finds there are no abortion riders available to individuals outside the Marketplace.

Some consumers may fail to pay their premium in full and have their coverage terminated for delinquent payment. The proposed rule states that if a subscriber fails to pay in separate envelopes or as separate transactions but pays the total amount in one payment, then the issuer is not permitted to cancel the coverage. It does not speak, however, to what issuers should do if the payment is not made in full—that is, if the policyholder pays for the EHB share of the premium but does not make the abortion payment.

When an issuer may begin the termination process for delinquent payments varies. Insurers could terminate coverage if QHP premium payments are not made in full following a grace period. Some insurers may have opted to set a premium threshold, which is a dollar amount or a percentage of the premium that the policyholder may owe before the process to terminate the policy for nonpayment is initiated. The amount the policyholder owes for non-payment is cumulative and over time, even a premium threshold will not be protective for policyholders who may be confused about or unaware they have not paid their premiums in full.

Some issuers might eliminate abortion coverage from their plans altogether because of the additional cost and administrative requirements. As a result, women enrollees will bear the cost of abortion services, even in states that permit Marketplace plans to offer abortion coverage. To implement this process, issuers will need to establish a protocol for sending two separate bills (including printing the letter and an additional envelope) and will also need to pay for postage for an extra monthly mailing (bulk mail is $0.383/mailing). HHS has calculated that this would affect 1,111 plans in 17 states and estimated costs per issuer ($63,120) totaling an estimated $807,385.92 for all plans. These estimates do not include the cost of printing and mailing the extra bills as well as additional staffing that will be needed to answer enrollee questions and address delinquent payments. Insurers could experience declining enrollment when enrollees default on coverage payments, even when they have the resources to cover the costs.

This rule is consistent with the Trump Administration’s stated priority to limit abortion access and other regulatory actions that could lead to the erosion of ACA related improvements for women’s health services. The proposed regulations for abortion coverage would likely cause consumer confusion, lead to coverage terminations, and prompt more insurers to eliminate abortion coverage. If finalized, these regulations could further erode the availability of coverage for a health service that many women may need and use.