A Closer Look at The Uninsured Eligible for Medicaid and CHIP

The 2010 Affordable Care Act (ACA) has the potential to extend coverage to many of the 47 million nonelderly uninsured people nationwide.  The ACA establishes coverage provisions across the income spectrum, including the expansion of Medicaid eligibility to nearly all low-income adults, the creation of Health Insurance Marketplaces for people to purchase insurance directly, and the availability of new premium tax credits to help moderate-income individuals afford coverage in the Marketplace. As enacted in the ACA, Medicaid eligibility would expand to nearly all adults with incomes at or below 138 percent of the FPL (about $32,500 for a family of four in 2013) as of January 1, 2014. However, the Supreme Court ruling effectively made the Medicaid expansion an option for states. As of December 2013, 26 states were planning to implement the expansion in 2014.1 In states that do not implement the expansion, many uninsured adults who would have been newly-eligible for Medicaid will not gain a new coverage option and will likely remain uninsured.

Of the total 47.6 million uninsured, an estimated 29% would be eligible for Medicaid or the Children’s Health Insurance Program (CHIP) and 10% would fall into the coverage gap created by states that do not implement the Medicaid expansion.  (Figure 1)  The uninsured eligible for Medicaid and CHIP include both adults made newly eligible for the program by the expansion and individuals who were already eligible under pre-ACA rules but had not enrolled. 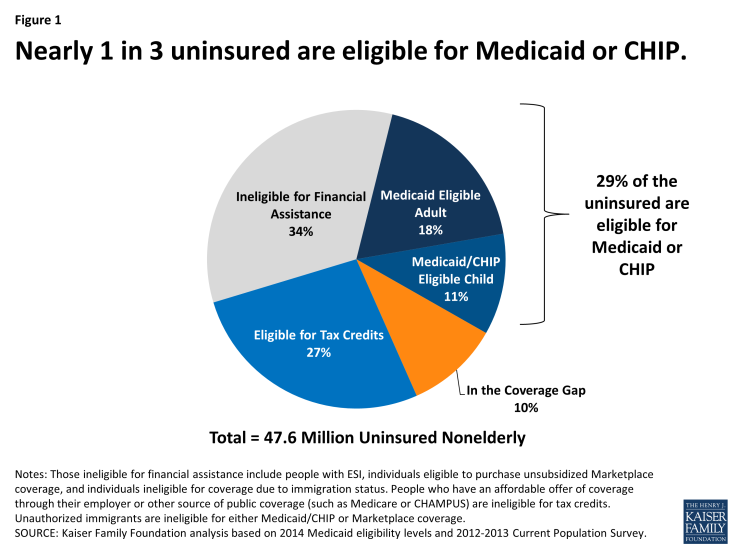 Under the ACA, all states must implement new streamlined enrollment processes designed to help connect eligible people to Medicaid and CHIP and coordinate enrollment with the new Marketplaces.  As a result, in all states, more people who were already eligible for the program are expected to enroll.  Because states have extended eligibility for children to much higher income levels than for adults through Medicaid and CHIP, many of these “currently eligible” but not enrolled people are children.

This brief provides a closer look at the child and adult uninsured population eligible for Medicaid and CHIP coverage under current and new ACA rules and identifies key differences between states moving forward with the expansion and those not moving forward at this time.2

The ACA was intended to fill historic gaps in coverage for low-income adults.  Historically, Medicaid had gaps in coverage for adults because eligibility was restricted to specific categories of low-income individuals, such as children, their parents, pregnant women, the elderly, or individuals with disabilities. In most states, adults without dependent children were ineligible for Medicaid, regardless of their income, and income limits for parents were very low—often below half the poverty level.  The ACA aimed to fill in these gaps by extending Medicaid to nearly all nonelderly adults with incomes at or below 138% of poverty (about $32,500 for a family of four in 2013).  However, the Supreme Court ruling effectively made the Medicaid expansion an option for states. As of December 2013, 26 states were planning to implement the expansion in 2014.

Eligibility levels for adults will significantly increase in states implementing the Medicaid expansion, while large coverage gaps will remain in states not expanding at this time. In the 26 states expanding Medicaid, the median eligibility threshold for adults will be 138% FPL.  However, many poor parents and other adults will remain ineligible in the 25 states not expanding at this time. Overall, the median eligibility level for parents in these non-expansion states will be just 47 percent of the FPL (Figure 2).  Parents and other adults with incomes above these limited Medicaid eligibility levels but below 100 percent of the FPL will fall into a coverage gap, since they will earn too much to qualify for Medicaid but too little to qualify for premium tax credits in the Marketplaces, which begin at 100 percent of the FPL. Of the states not implementing the Medicaid expansion, only Wisconsin will provide full Medicaid coverage to adults without dependent children. 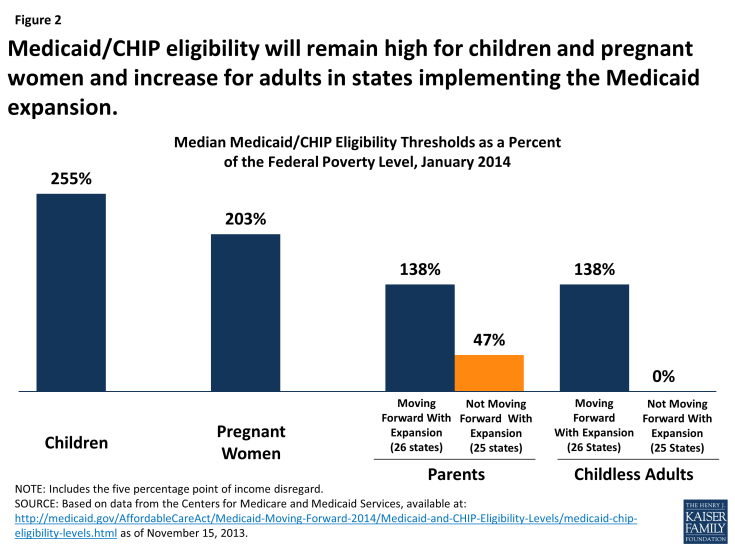 The ACA requires all states to implement streamlined and coordinated enrollment processes.  Regardless of state Medicaid expansion decisions, all states must implement new streamlined enrollment processes designed to help connect eligible people to Medicaid and CHIP and coordinate enrollment with the new Marketplaces.  As a result, in all states, more people who were already eligible for the program are expected to enroll.  Many of these “currently eligible” people are children, since states extend Medicaid and CHIP eligibility for children to much higher incomes than adults.

Findings: The Uninsured Eligible for Medicaid and CHIP 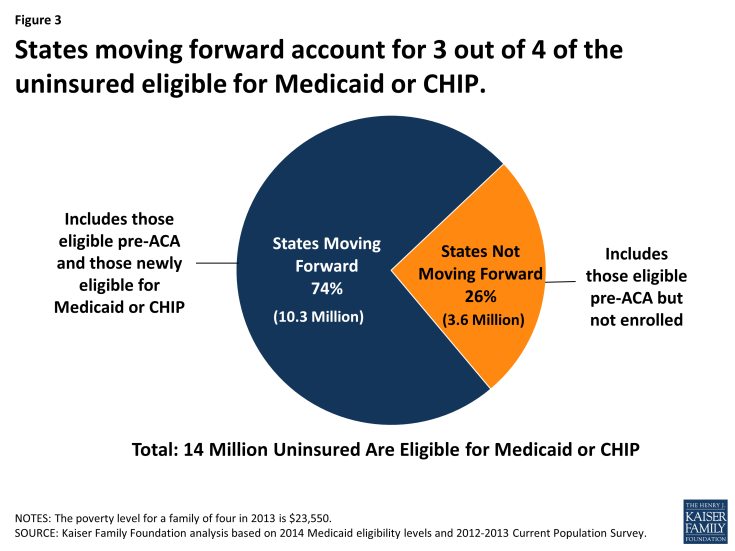 Depending on a state’s decision to implement the expansion, the composition of the uninsured eligible for Medicaid and CHP varies across children and adults. 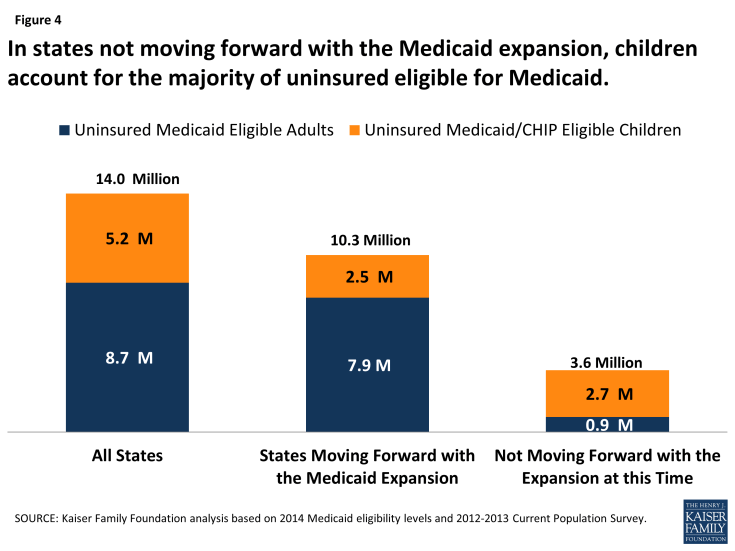 This analysis uses pooled data from the 2012 and 2013 Current Population Survey (CPS) Annual Social and Economic Supplement (ASEC). The CPS ASEC provides socioeconomic and demographic information for the United Sates population and specific subpopulations. Importantly, the CPS ASEC provides detailed data on families and households, which we use to determine income for ACA eligibility purposes (see below for more detail). We merge two years of data in order to increase the precision of our estimates.

Immigrants who are not lawfully present are ineligible for Medicaid and Marketplace coverage. Since CPS data do not directly indicate whether an immigrant is lawfully present, we impute documentation status for each person in the sample. To do so, we draw on the methodology in the State Health Access Data Assistance Center (SHADAC) paper, “State Estimates of the Low-Income Uninsured Not Eligible for the ACA Medicaid Expansion.”4  This approach uses the Survey of Income and Program Participation (SIPP) to develop a model that predicts immigration status; it then applies the model to CPS, controlling to state-level estimates of total undocumented population from Department of Homeland Security. For more detail on the immigration imputation used in this analysis, see the technical Appendix B available here.

An individual’s income is likely to fluctuate throughout the year, impacting his or her eligibility for Medicaid. Our estimates are based on annual income and thus represent a snapshot of the number of people in the coverage gap at a given point in time. Over the course of the year, a larger number of people are likely to move and out of the coverage gap as their income fluctuates.