The Many Roads to Medicaid: An Overview of How People are Connecting to the Program Today

Much attention currently is focused on enrollment estimates to gauge and measure implementation of the Affordable Care Act (ACA) coverage expansions that will take effect on January 1, 2014. Recently, HHS and CMS have reported new eligibility and enrollment data for the Marketplaces created by the ACA and Medicaid and CHIP, providing some of the timeliest data on Medicaid enrollment that has ever been captured and preliminary information on how early ACA implementation is impacting Medicaid enrollment. However, currently, there is no single data source that provides comprehensive information on Medicaid enrollment. As such, to gain a full picture of enrollment in Medicaid, it is important to look across the different enrollment paths connecting people to the program today (Figure 1). This brief provides an overview of these different enrollment paths and national level data available to date on enrollment through these avenues. 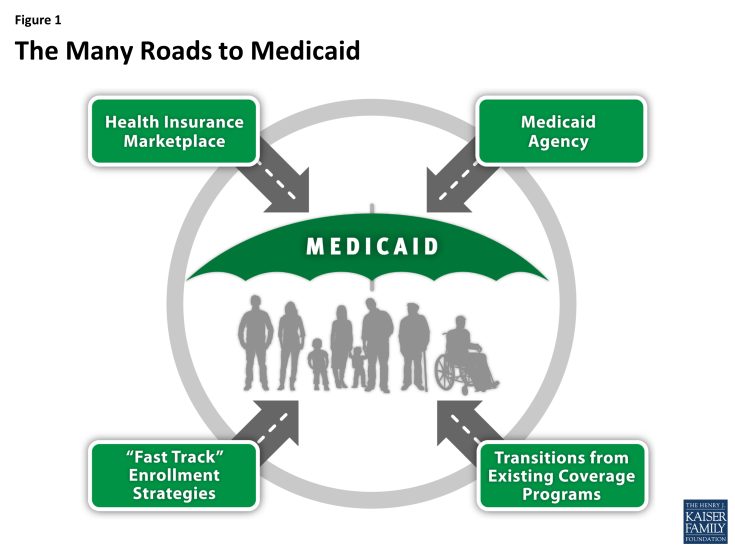 The early technological problems of the Marketplaces, particularly the Federal Marketplace, Healthcare.gov, were well-documented and contributed to lower than anticipated enrollment in qualified health plans (QHPs) during the initial month of open enrollment. A coinciding story, however, has been the early success of enrollment in Medicaid, the other key coverage expansion of the ACA. The ACA will expand Medicaid eligibility to adults with incomes at or below 138% of the federal poverty level (FPL) in the 26 states and DC that are moving forward with the expansion in 2014 and simplify eligibility and enrollment policies in all states.

While the early success of enrollment in Medicaid has spurred attention, it is important to note that Medicaid enrollment was always anticipated to account for a significant share of the coverage gains under the ACA. According to the Congressional Budget Office’s May 2013 estimates, by 2016 the ACA is expected to result in a reduction of the uninsured of 25 million with a 12 million increase in Medicaid enrollment.1  The enrollment increases in Medicaid will reflect coverage gains among both adults made newly eligible for the program by the expansion as well as among individuals who were already eligible under existing rules but not enrolled. In the 26 states implementing the expansion in 2014, millions of low-income adults will become newly eligible for the program. Moreover, in all states, more people who were already eligible for the program will enroll as they are connected to coverage through broad outreach efforts and new simplified enrollment processes that states must implement, regardless of whether they expand Medicaid. Many of these “currently eligible” people are children, since states extend Medicaid and CHIP eligibility for children to much higher incomes than adults.

The early success of enrollment in Medicaid stems from a variety of factors including the fact that it is easier to enroll people into an existing program than it is to start something new and that to complete enrollment in a QHP through the Marketplace, individuals must select a plan and pay their first month’s premium. Moreover, with implementation of the ACA’s new streamlined enrollment policies for Medicaid, there are now many roads open to connect people to the program, including several avenues that allow states to quickly and efficiently enroll large numbers of eligible people to the program. This array of Medicaid enrollment options is reflective of the ACA’s vision of a “no wrong door” enrollment system that is intended to connect a person to the coverage for which he or she is eligible regardless of where or through which mode a person applies. Given the multiple roads connecting people to Medicaid today, it is important to examine data across these paths to gain a full understanding of Medicaid enrollment. Examining data associated with any one path will only provide one piece of the enrollment picture. Below is a brief roadmap of these paths and the associated enrollment data available to date.

Throughout implementation of the ACA, states have continued to operate their Medicaid and CHIP programs, and individuals have continued to apply through the existing enrollment pathways for the programs. Prior to the ACA, all states allowed individuals to apply for Medicaid or CHIP by mail or in-person, and an increasing number were offering additional application pathways for families. For example, as of January 2013, 37 states had an online Medicaid or CHIP application in place and 17 states were accepting telephone applications.2 As states implement the new streamlined Medicaid eligibility and enrollment processes required under the ACA, all states will move toward providing consumers multiple options to apply—including online, by phone, in-person, and by mail—using a single, streamlined application that will screen for eligibility for Medicaid, CHIP, and advance premium tax credits for Marketplace coverage. In addition, some states have integrated or plan to integrate Medicaid enrollment with other social service programs, such as Temporary Assistance for Needy Families or the Supplemental Nutrition Assistance Program (SNAP), so that a person applying for other types of assistance can be screened for eligibility for health coverage and vice versa.

As a key part of the ACA’s “no wrong door” enrollment approach, the Marketplaces will determine or assess individuals’ eligibility for all health coverage programs, including Medicaid and CHIP, and individuals will be enrolled in the program for which they are eligible regardless of how they apply. States operating SBMs generally have linked or integrated systems that are designed to determine eligibility for all health coverage options and facilitate the next steps for enrollment. However, in states using the FFM, electronic transfers of individual accounts between the Marketplace and Medicaid agencies are essential for coordinating enrollment. Due to ongoing technological challenges with the FFM, these transfers have been delayed. However, CMS has developed mitigation strategies to transfer information to states and has provided options to allow states to use transferred data files to make eligibility determinations until the electronic transfers are operational.7

In the first two months since the Marketplaces opened for enrollment on October 1, 2013, 803,000 people, accounting for over one in four (26%) of the total 3.1 million processed applications, were determined or assessed as eligible for Medicaid or CHIP.8 These early data provide some sense of the number of individuals likely to enroll in Medicaid through the Marketplaces based on activity during this first month of open enrollment. However, in many cases, additional steps still need to be taken by state Medicaid agencies to effectuate enrollment for these processed applications. Moreover, it is important to recognize that these data do not reflect the enrollments stemming from applications submitted to Medicaid and CHIP agencies. Of the 803,000 people assessed or determined eligible for Medicaid or CHIP by a Marketplace, two thirds or roughly 534,000 were processed by a SBM, although several states with SBMs were not able to break out this data point, while one-third or about 269,000 were processed through the FFM.9 While not all SBM states reported separate data on the number of people determined or assessed as Medicaid or CHIP eligible, in those that did, Medicaid represented a larger share of processed applications (about 40%) compared to states relying on the FFM (15%).10 This, in part, reflects the fact that all states with a SBM are implementing the Medicaid expansion, while many of the states utilizing the FFM are not implementing the expansion at this time. Many of the applications assessed or determined as Medicaid or CHIP eligible in the states not expanding Medicaid are likely for children, given that these states extend eligibility for children to higher levels, while eligibility for adults remains very limited.

Recognizing the significant administrative demands on states as they implement the Medicaid expansion and new enrollment processes and systems, CMS has offered states strategies to expedite enrollment. In particular, two of these strategies allow states to get a jump-start on enrollment by using data already available through SNAP or children’s Medicaid and CHIP programs to reach and enroll Medicaid-eligible individuals through significantly streamlined processes.11 As of November 2013, the four states that had implemented these “fast track” strategies had together enrolled more than 223,000 people in coverage, enabling these states to reach a significant share of their Medicaid expansion population while minimizing burdens on staff and consumers and reducing the volume of traffic traveling through Medicaid and Marketplace enrollment systems.12 Some of the enrollment occurring through these strategies is reflected in the October 2013 Medicaid and CHIP eligibility determination data reported by CMS.

Even when more comprehensive Medicaid enrollment data become available, additional information and analysis will be needed to understand key ACA implementation issues, including, for example, what share of enrollees are newly eligible, consumer experiences and satisfaction the enrollment process, and how Medicaid enrollment compares to enrollment through the new Marketplaces. Moreover, ultimately, understanding the success of the ACA in meeting its intended goals will require looking beyond enrollment data to examine broader impacts such as the reduction in the number of uninsured and continuity of coverage for people over time. However, measuring these outcomes will take time and extend beyond this initial year of implementation.