The uninsured rate has fallen among all racial and ethnic groups under the Affordable Care Act with steeper declines among people of color compared to Whites, according to a new analysis by the Kaiser Family Foundation. The findings for Hispanics were especially striking. Between 2013 and 2015, the uninsured rate for Hispanics fell from 26 percent to 17 percent – a sharper decline than for any other group. Nationally, the total number of nonelderly uninsured fell from 41.1 million to 28.5 million, reducing the overall uninsured rate from 15 percent to a historic low of 10 percent over the period. 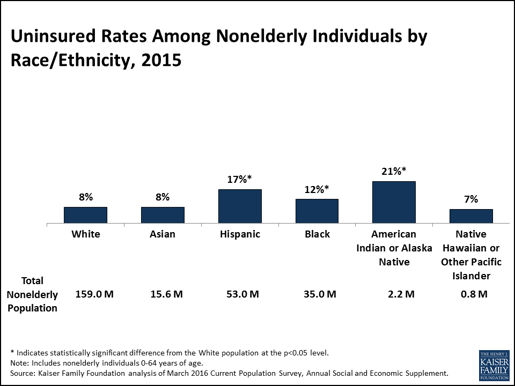 The analysis of Current Population Survey data also shows that eligibility for coverage among the remaining uninsured varies by race and ethnicity. Overall, more than 4 in 10 remaining nonelderly uninsured people are eligible for help to gain coverage through the ACA. Key findings include: