The COVID-19 outbreak will likely disproportionately affect communities of color in both their health and their pocketbooks, compounding longstanding racial disparities in health and economic conditions, according to a new KFF analysis.

While comprehensive data about how the COVID-19 crisis is unfolding are not yet available, early data from some areas suggest groups of color are experiencing disproportionate health and economic impacts. As of April 6, to cite a few examples:

The new numbers stand alongside existing data that suggest that many people of color are at increased risk for experiencing serious illness if they contract COVID-19 due to higher rates of certain underlying health conditions such as diabetes and asthma compared to Whites. Nonelderly Black, Hispanic, and American Indian and Alaska Native adults are more likely than Whites are to report fair or poor health, according to KFF analysis of federal survey data.

People of color also are more likely to be uninsured and to lack a usual source of care, which could translate into increased challenges accessing COVID-19 testing and treatment services. Among the nonelderly, 22 percent of American Indians and Alaska Natives lacked health coverage in 2018, as did 19 percent of Hispanics and 11 percent of Blacks, compared to 8 percent of Whites. 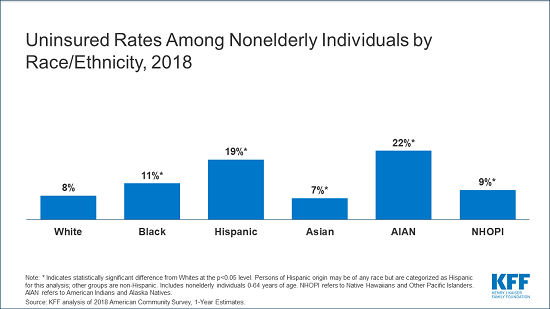 Moreover, people of color are more likely to work in certain industries (such as restaurant, hospitality, retail and other service industries) that are particularly at risk for loss of income right now, but have limited ability to absorb these decreases due to lower incomes. Over a quarter of Blacks, Hispanics, and AIANs are low-wage workers, compared to less than 17 percent of Whites.

For the full analysis, as well as other data and analyses about the coronavirus and COVID-19, visit kff.org.