Medicaid covers 70 million Americans, many with chronic conditions who may be at increased risk for COVID-19. Medicaid beneficiaries, particularly those with chronic conditions, will need access to medications even during social distancing and their ability to meet with providers to obtain refills may be hindered. States are updating policies to allow beneficiaries to access medications during this public health emergency. States can allow beneficiaries to have more of their medication on hand and reduce the barriers to receiving medication by eliminating cost sharing, changing administrative requirements and reducing the need for in-person contact by encouraging mail delivery or eliminating signatures.

States can use many of the tools traditionally used to manage prescription drug utilization to increase beneficiary access to medications during an emergency, like COVID-19. These tools include prior authorization (PA) requirements, use of preferred drug lists (PDLs), quantity limits and restrictions on refill frequency.  States have flexibility in how they administer their programs and can make a number of changes without the need for approval from CMS. We are tracking state changes to the pharmacy benefit in response to COVID-19 on our SPA and Other Administrative Actions Tracker (Figure 1). We also just posted a comprehensive survey of how states administer the Medicaid pharmacy benefit, which can serve as benchmark going forward. 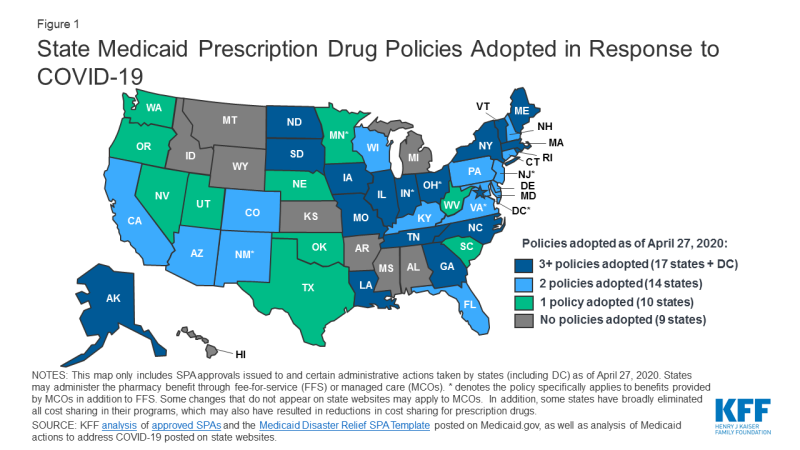 Most of the changes states are making apply to the fee-for-service (FFS) benefit but some apply more broadly to managed care plans as well and are noted as such in the tracker.  In response to COVID-19, states are:

Our pharmacy benefits survey reports on state management of the pharmacy benefit prior to the COVID-19 emergency, providing context for state policy changes. According to our survey, 46 states maintain a PDL of outpatient prescription drugs, which is a list of drugs states encourage providers to prescribe over others. Prior authorization is also widely used: forty-six states reported that new drugs are “always” or “sometimes” subject to prior authorization. Thirteen states set limits on prescription amounts and total number of prescriptions a beneficiary can have on hand.  States may also charge nominal cost-sharing; 37 states require pharmacy copayments for certain adults. Because states can operate prescription drug programs in fee-for-service (FFS) or managed care, rules and policies may differ based on how the state administers their program – in some cases MCOs must follow rules set by the state for FFS, but in other states MCOs may have more flexibility to manage most of the prescription drug program and assume the risk.  Thirty-five states carve prescription drugs into managed care.

State pharmacy benefit decisions will be important to watch going forward as cases of COVID-19 grow and impact more communities across the US. Medicaid will be a major source of health coverage as individuals lose income and become unemployed. For current and any new enrollees, ensuring access to prescription drugs will be important to manage on-going chronic conditions, particularly as the health system is strained dealing with COVID-19.  We are continuing to update our tracker with the latest information from states and are watching for federal policy and legislative changes.