Medicaid has always provided coverage for people with pre-existing conditions, even before the passage of the ACA. Prior to the ACA, individuals could be denied coverage in the private insurance market if they had a pre-existing condition. However, eligibility for Medicaid prior to the ACA was based on income and other categorical eligibility criteria (e.g., being parent or person with disability), not health status. If a person met these eligibility criteria, states could not deny Medicaid to that person even if he or she had a pre-existing condition. In addition, Medicaid coverage was explicitly extended over the years to several groups that do have pre-existing conditions, such as pregnancy or certain functional disabilities, for whom private insurers routinely used to deny individual insurance before the ACA. These protections were in place even before the ACA prohibited private health insurance discrimination based on health status and are part of the reason that Medicaid has historically covered many people with serious and persistent illnesses or disabilities (like HIV or serious mental illness) for whom private coverage was not available or if available, not adequate or too costly.

The expansion of Medicaid under the ACA extended Medicaid coverage to millions of adults who were previously ineligible for coverage without regard to pre-existing conditions. As of June 2019, 15 million adults were covered through the ACA eligibility pathway. If the ACA were overturned and federal matching funds were eliminated, it is likely that states would not retain eligibility for the vast majority of these people. While the majority of adult Medicaid enrollees work full or part-time, most are unlikely to have an affordable offer through their job and would face purchasing health insurance in an individual market where pre-ACA underwriting rules applied. 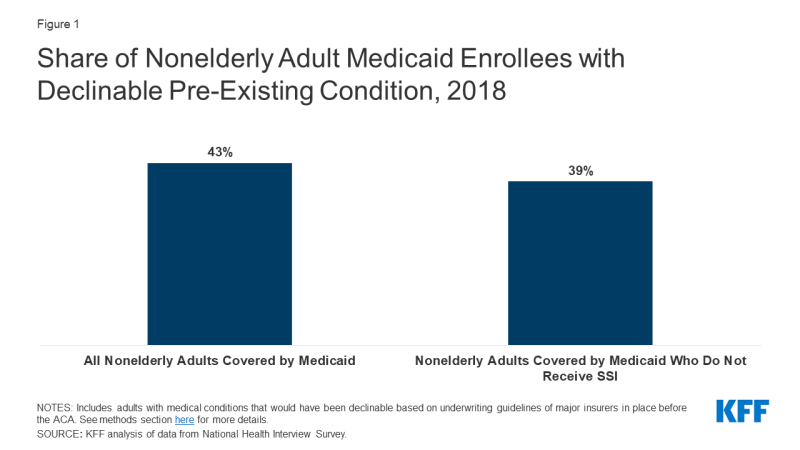 More broadly than Medicaid, adults with low incomes are more likely than those with higher incomes to have a pre-existing condition. More than one in three nonelderly adults with incomes below 138% of the poverty level – the threshold for expanded Medicaid eligibility under the ACA – have a pre-existing condition that would likely have led to a coverage denial before the ACA (Figure 2). Without the Medicaid expansion, availability of subsidies in the marketplace and protections for people with pre-existing conditions, most low-income people would not have options for affordable coverage and would likely be uninsured. 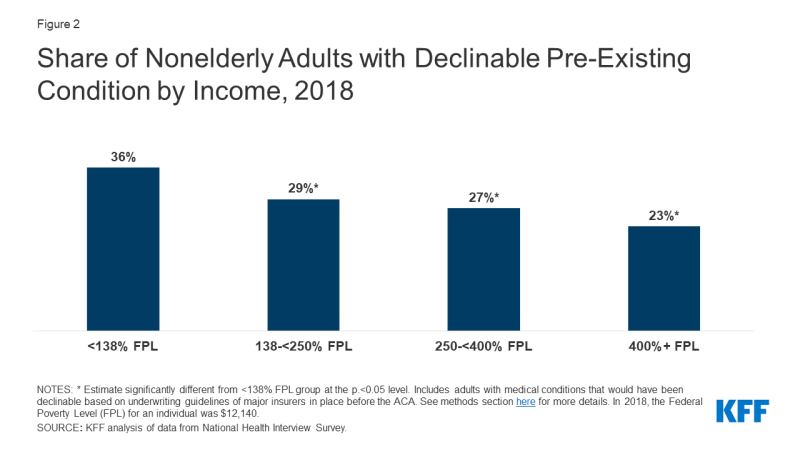