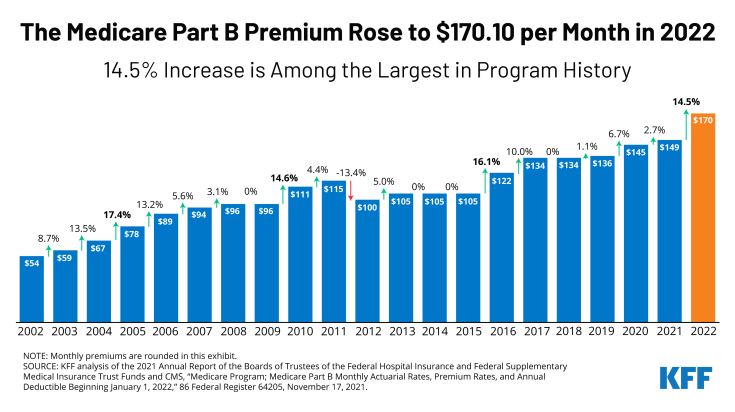 CMS explained that the increase for 2022 was due in part to the potential costs associated with the new Alzheimer’s drug, Aduhelm (aducanumab), manufactured by Biogen, which had an initial annual price tag of $56,000. The increase in the Part B premium was to allow for a “high-cost scenario” of Aduhelm coverage based on assumptions about utilization months before the scheduled announcement of a National Coverage Determination (NCD).

A proposed NCD was announced on Tuesday, January 11, that will be followed by a 30-day comment period and a final decision to be announced by April 11, 2022. The NCD proposes to cover Aduhelm and other similar FDA-approved antiamyloid monoclonal antibodies under Coverage with Evidence Development (CED) in approved randomized controlled trials that satisfy particular coverage criteria. In effect, these drugs will not be covered for people on Medicare unless they are part of a qualifying clinical trial.

On January 10, HHS Secretary Xavier Becerra instructed CMS to reassess the amount of the 2022 Medicare B premium to account for a 50% price reduction in Aduhelm announced by Biogen in late December 2021. Becerra’s order to reassess the Part B premium after it had been announced was highly unusual.