People on Medicare, including seniors and younger adults with disabilities, often live on fixed incomes supplemented by the savings they accumulated during their working years.1,2  A person’s ability to build wealth depends on many factors, including their education, health status, marital status, number of work years, household income, periods of unemployment, years of homeownership, access to employer retirement benefits, inheritance, and other financial supports.  These financial experiences for individuals during their working years differ by race/ethnicity, which in turn leads to differences across race/ethnicity in income and wealth in retirement.3,4

Many people on Medicare live on limited incomes, and have relatively modest savings and home equity.5  In 2012, half of all Medicare beneficiaries had less than $22,500 in income and half had less than $63,100 in savings.6  Further, the outlook for the next generation of Medicare beneficiaries is not expected to be much brighter.  The increase in Social Security’s full retirement age from 65 to 67 means that Social Security will replace a smaller portion of the income of future seniors claiming benefits at the same age as current seniors.  The historic shift from defined benefit pensions to defined contribution pensions means that fewer future Medicare beneficiaries will have guaranteed, defined benefit pension income from former employers, and more will rely on less secure sources of income, particularly if investments in employer-sponsored defined contribution plans (e.g., 401K plans) are tied to fluctuations in the economy and stock market.7  Between 1988 and 2012, the share of employers that offered retiree health benefits fell from 66 percent to 25 percent.8  If this trend continues, fewer future Medicare beneficiaries will have retiree health benefits and more will be responsible for paying Medicare premiums and out-of-pocket costs.  Furthermore, rising budget deficits will increase pressure to reduce spending, increase taxes, or both.  Numerous deficit reduction packages have included reductions in Medicare spending and Social Security benefits, and increases in out-of-pocket health care costs for Medicare beneficiaries, which could further erode the economic security of many vulnerable Americans.

This report includes important distributional information about the means of current and future Medicare beneficiaries.  It updates and complements our prior work in this area by focusing on differences in the income and assets of people on Medicare by race/ethnicity, using data from the DYNASIM microsimulation model developed by researchers at the Urban Institute.  A table summarizing the income and assets of Medicare beneficiaries in 2012 and 2030, by selected demographic characteristics, is included in Table A1.  Data are rounded to the nearest $50 and are presented on a per person basis, rather than per household; for married people on Medicare, income and assets are divided equally between spouses to calculate per capita income, savings, and home equity.  More information about the methodology can be found in the Appendix. This analysis provides new information about disparities in incomes and assets among the Medicare population by race and ethnicity to inform ongoing discussions about potential changes to Medicare, Medicaid, Social Security and other policy proposals that could have important implications for the economic security of current and future Medicare beneficiaries.

Income and Assets among Medicare Beneficiaries in 2012, by Race/Ethnicity 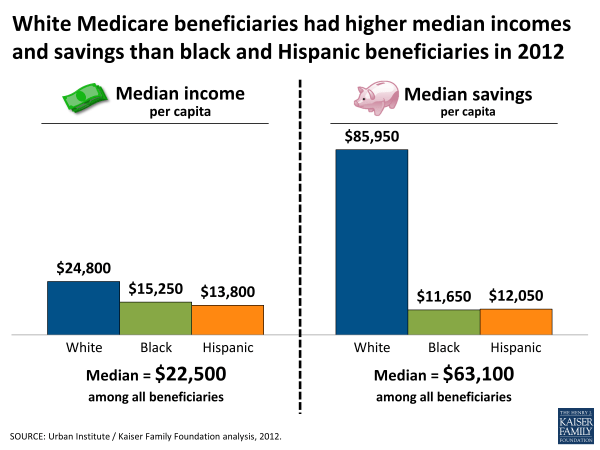 Projected Growth in Income, Savings, and Home Equity, by Race and Ethnicity, 2012-2030 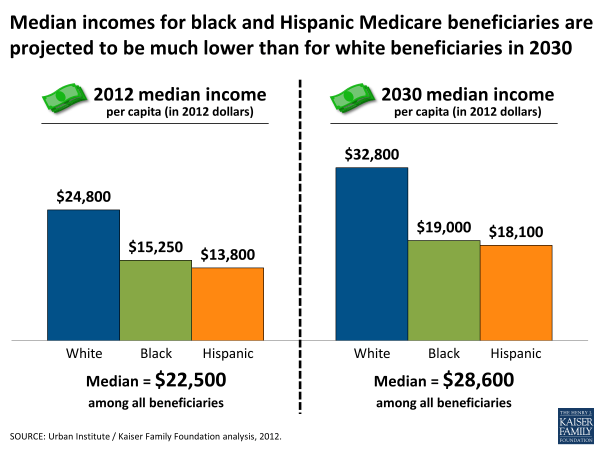 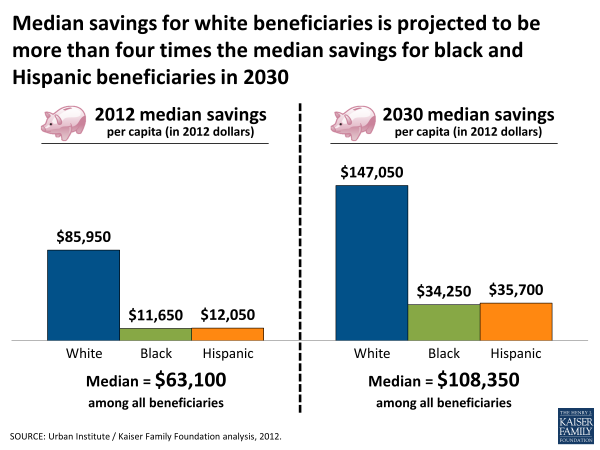 These findings present a sobering story. Building on prior research documenting modest income and assets for many Medicare beneficiaries, with wealth concentrated among a very small share of the Medicare population, this analysis reveals significant disparities in income, savings, and home equity among Medicare beneficiaries by race and ethnicity. Looking to the future, the Medicare population of 2030 is projected to have somewhat higher incomes and savings than the current generation, but at the median, the gains are predicted to be modest for the overall Medicare population, especially for black and Hispanic beneficiaries. A clear understanding of the economic realities of the Medicare population provides an important context for designing and assessing Medicare, Social Security, Medicaid and other policy proposals that could strengthen or weaken the economic security of older Americans.