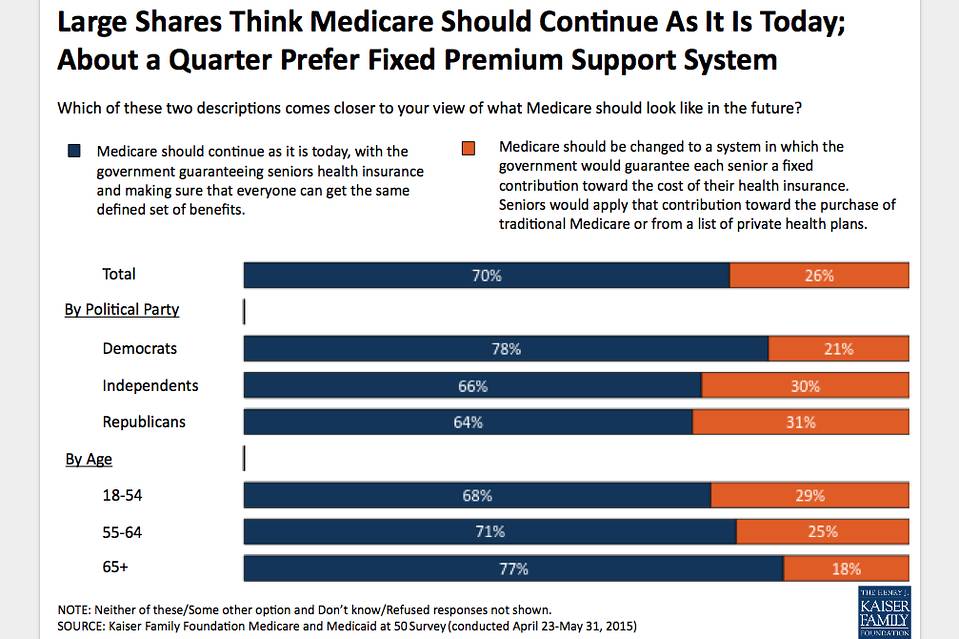 Two things happened this week that could heighten Medicare’s visibility in the coming election cycle.

So far Medicare has not been one of the major health-care issues in the presidential campaign. Neither Hillary Clinton nor Donald Trump has talked about it much. The former secretary of state has discussed the idea of a Medicare buy-in for the near-elderly, but that’s been mentioned more as a way of strengthening the Affordable Care Act, not reforming Medicare. Meanwhile, Medicare faces serious long-term challenges, including how to finance care for an aging population, ensure its solvency in the future, fill gaps in coverage, and address cost-sharing burdens that can be onerous for its mostly lower- and moderate-income beneficiaries. But more attention may be coming, thanks to this week’s events.

First, Speaker Paul Ryan released the House Republican health-care plan, which includes a number of major and potentially controversial changes to Medicare, including premium support, raising the age of program eligibility, and altering deductibles and cost-sharing for seniors in traditional Medicare. The primary Republican idea for reforming Medicare, called premium support, can take different forms; that leads to different impacts on seniors and Medicare savings, depending on the details. Whatever its form, premium support would represent a fundamental change to the program, and it would spark a partisan political fight rivaling anything we have seen so far on the ACA. Opinion can change as a policy debate unfolds, but as the chart above shows, the public’s starting position is strongly against shifting Medicare to a premium-support model: Only 31% of Republicans and 18% of seniors back the idea. Premium support has its pros and cons. And almost any big change to Medicare will be an uphill fight.

Also this week, Medicare’s trustees released their annual report, which projects a shortfall in the Medicare Hospital Insurance Trust Fund beginning in 2028. That’s just 12 years down the line and two years sooner than was projected last year. The report also raised a flag about the increase in Medicare drug spending–an issue both presidential candidates have raised. Mr. Trump has said that he is for removing barriers to the safe re-importation of drugs manufactured here and for allowing the federal government to negotiate lower drug prices. Mrs. Clinton is also for safe re-importation of drugs and allowing government negotiations on drug prices; she has also said that she would secure higher rebates from drug companies on prescriptions for Medicare and its enrollees.

Before he launched his presidential campaign, Mr. Trump pledged that he wouldn’t touch Medicare if elected, and his campaign Web site does not include proposals to change the program. How he responds to the House Republican proposals, if he responds, will affect how the issue plays in the presidential campaign. He may come under pressure to embrace part or all of the GOP plan, or Mrs. Clinton could draw him out in general-election debates. For congressional candidates, the main role of the House plan appears to be enabling down-ballot Republicans to tell voters that they are not only for repealing Obamacare but also that they have a “plan” to replace it. Democrats are likely to respond by underscoring the major differences between the parties with respect to Medicare’s future.

Medicare entered the election this week; the coming months will show whether it becomes an issue as in past campaigns, activating senior voters.