This was published as a Wall Street Journal Think Tank column on June 11, 2015. 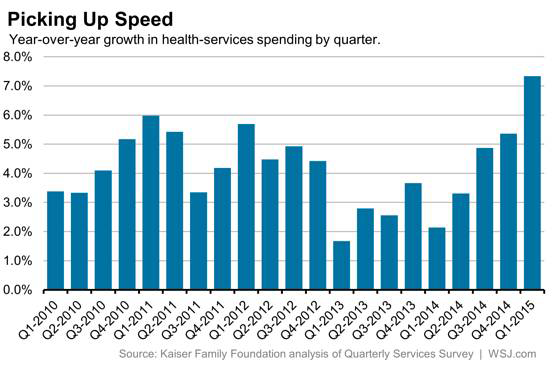 Like Californians waiting for the record drought to lift, health-cost watchers like me have been waiting for health spending to begin to grow more rapidly again as the economy strengthens. It looks like that may now be beginning to occur.

The U.S. Census Bureau has published new estimates of health spending based on their somewhat obscure but important Quarterly Services Survey. Analysis of the survey data shows that health spending was 7.3% higher in the first quarter of 2015 than in the first quarter of last year. Hospital spending increased 9.2%. Greater use of health services as well as more people covered by the ACA appear to be responsible for most of the increase. People are beginning to use more physician and outpatient services again as the economy improves. The number of days people spent in hospitals also rose.

Overall, as the chart above shows, the increase was much larger in first quarter of 2015 than in the first quarters of 2014 or 2013.

The quarterly reports from the Census don’t tell us how rapidly health spending will continue to grow in the future. However, the fact that spending has been growing at higher rates over the last four quarters  suggests that the lowest of the lows of the health cost slowdown are now in the rear view mirror. Equally importantly, despite the fanfare surrounding current efforts to reform the delivery and payment in health care and the progress that has been made, it may also suggest that greater efforts will be needed in the future to keep cost increases manageable.