An important question in the debate over proposals to repeal and replace the Affordable Care Act (ACA) is what might happen to the law’s many provisions affecting the Medicare program. The American Health Care Act (AHCA), which was passed by the House of Representative on May 4, 2017, and the Better Care Reconciliation Act (BCRA), released by Senate Republicans on June 22, 2017, would leave most ACA changes to Medicare intact, including the benefit improvements (no-cost preventive services and closing the Part D coverage gap), reductions to payments to health care providers and Medicare Advantage plans, the Independent Payment Advisory Board, and the Center for Medicare and Medicaid Innovation.

However, both bills would repeal the Medicare payroll surtax on high-income earners that was added by the ACA, effective January 2023. That provision, which took effect in 2013, provides additional revenue for the Part A trust fund, which pays for hospital, skilled nursing facility, home health and hospice benefits. The Part A trust fund is financed primarily through a 2.9 percent tax on earnings paid by employers and employees (1.45 percent each). The ACA increased the payroll tax for a minority of taxpayers with relatively high incomes—those earning more than $200,000/individual and $250,000/couple—by 0.9 percentage points.

In addition to repealing the ACA’s Medicare payroll surtax, both bills would repeal virtually all other tax and revenue provisions in the ACA, including the annual fee paid by branded prescription drug manufacturers, which would decrease revenue to the Part B trust fund. The bills would also reinstate the tax deduction for employers who receive Part D Retiree Drug Subsidy (RDS) payments, which would increase Medicare Part D spending.

According to the Congressional Budget Office, the provision in the AHCA and the BCRA to repeal the Medicare payroll surtax would reduce revenue for Part A benefits by $58.6 billion between 2017 and 2026. Proposed changes to the ACA’s marketplace coverage provisions and to Medicaid financing in both bills would also increase the number of uninsured, putting additional strain on the nation’s hospitals to provide uncompensated care. As a result, Medicare’s “disproportionate share hospital” (DSH) payments would increase, leading to higher Part A spending between 2018 and 2026 of more than $40 billion, according to CBO.

Altogether, changes to Part A spending and financing in the AHCA and BCRA would weaken Medicare’s financial status by depleting the Part A trust fund two years earlier than under current law, moving up the projected insolvency date from 2028 to 2026, according to Medicare’s actuaries (Figure 1). 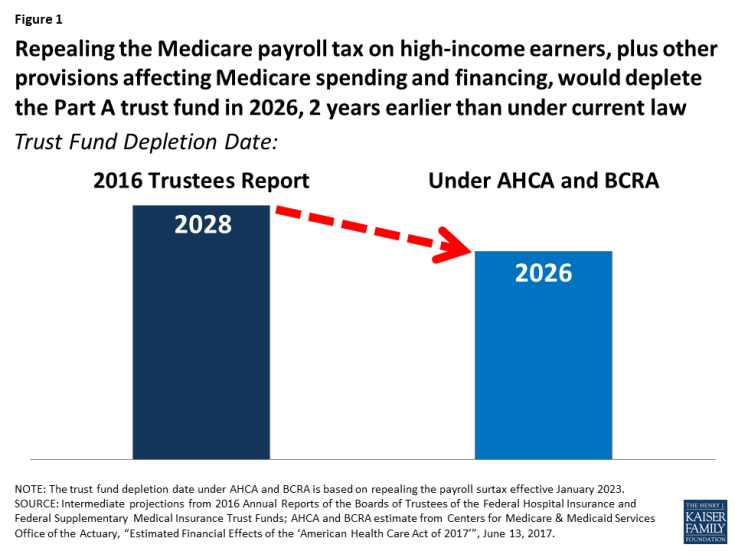 Figure 1: Repealing the Medicare payroll tax on high-income earners, plus other provisions affecting Medicare spending and financing, would deplete the Part A trust fund in 2026, 2 years earlier than under current law

Reducing the flow of revenues to the Part A trust fund by repealing the payroll surtax paid by high-income earners and increasing Part A spending due to higher DSH payments has direct implications for the ability of Medicare to pay for Part A benefits on behalf of Medicare beneficiaries. When spending on Part A benefits exceeds revenues, and assets in the Part A trust fund account are fully depleted, Medicare will not have sufficient funds to pay all Part A benefits (although the Medicare program will not cease to operate).

In addition to the impact on Medicare’s solvency in the short term, repealing the high-income earner payroll surtax and other proposed changes affecting Part A spending and revenues would also worsen the program’s long-run financial status, increasing the 75-year shortfall in the Part A trust fund from 0.73 percent of taxable payroll to 1.18 percent, according to Medicare’s actuaries.

The projected date for depletion of the Medicare Part A trust fund has varied over time as a result of changes in policy and the economy affecting both revenues and spending (Figure 2). In the past, looming insolvency has prompted policymakers to debate and pass legislation that reduced Medicare spending, thereby improving the financial status of the Part A trust fund. For example, during the mid-1990s, when the Medicare actuaries were projecting trust fund insolvency by 2001, Congress enacted the Balanced Budget Act (BBA) of 1997, which reduced Medicare spending and extended the solvency of the Part A trust fund by an additional seven years. With the enactment of the ACA in 2010, Part A trust fund solvency was extended by several years as a result of the law’s provisions to increase the Medicare payroll tax on high-income earners and reduce provider and plan payments (Figure 3). 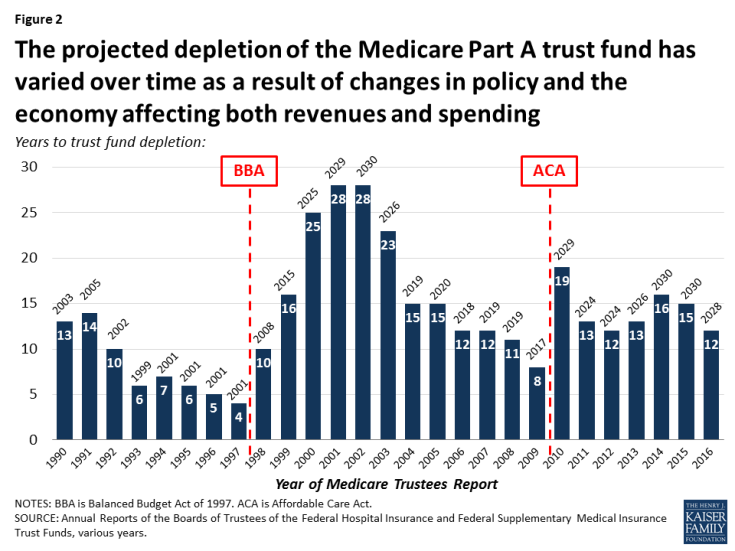 Figure 2: The projected depletion of the Medicare Part A trust fund has varied over time as a result of changes in policy and the economy affecting both revenues and spending 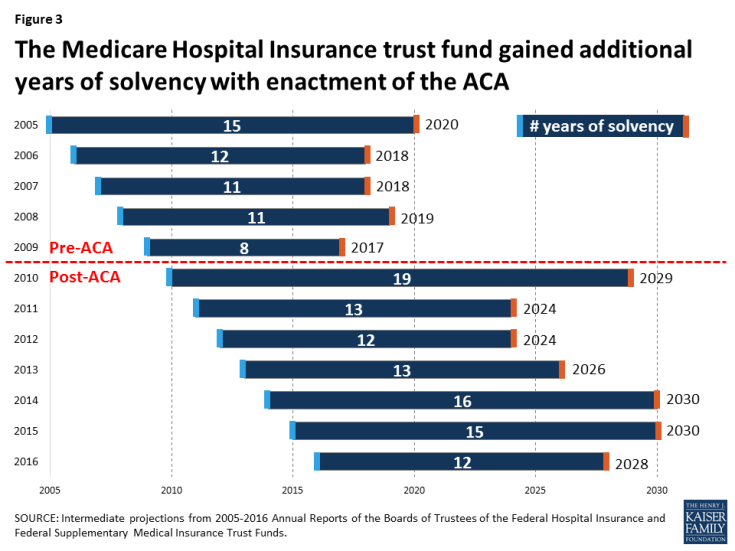 Whether the Part A trust fund remains solvent for an additional 11 years, as projected under current law, or 9 more years, under proposed changes affecting Medicare Part A spending and financing in the AHCA and BCRA, Medicare faces long-term financial pressure associated with higher health care costs and an aging population. Even if the payroll surtax on high earners is retained, the Part A trust fund is likely to need additional revenue to finance care for an aging population, unless policymakers choose instead to reduce Part A spending by cutting benefits, restricting eligibility, or reducing payments to providers and plans. By cutting taxes on high-income earners and thereby reducing revenue to the Medicare Part A trust fund, the AHCA and BCRA would increase pressure on policymakers to take some type of action sooner rather than later.