Medicare, the federal health insurance program for more than 60 million people ages 65 and over and younger people with long-term disabilities, helps to pay for hospital and physician visits, prescription drugs, and other acute and post-acute care services. This issue brief includes the most recent historical and projected Medicare spending data published in the 2019 annual report of the Boards of Medicare Trustees from the Centers for Medicare & Medicaid Services (CMS) Office of the Actuary (OACT) and the 2019 Medicare baseline and projections from the Congressional Budget Office (CBO). 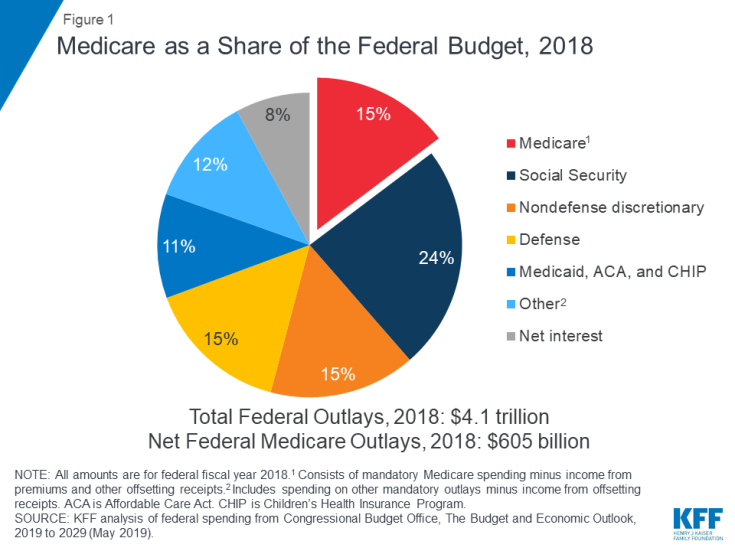 Figure 1: Medicare as a Share of the Federal Budget, 2018 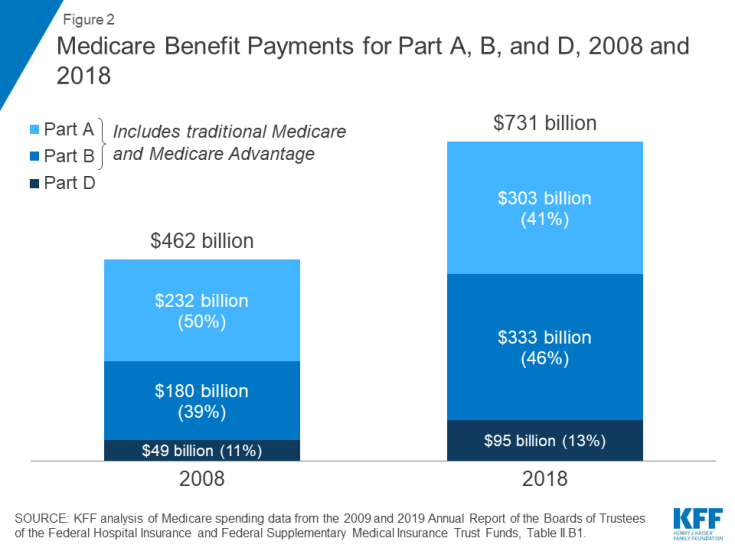 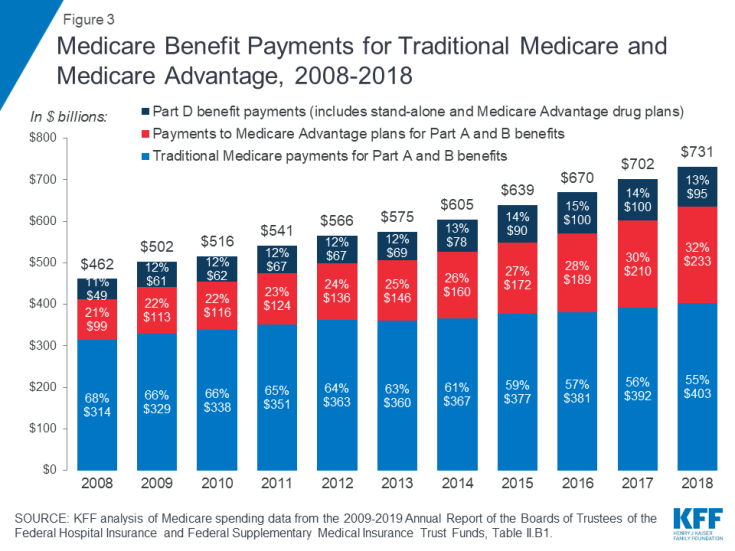 Trends in Total and Per Capita Medicare Spending

There has been a notable reduction in the growth of Medicare spending in recent years, compared to prior decades, both overall and per beneficiary. 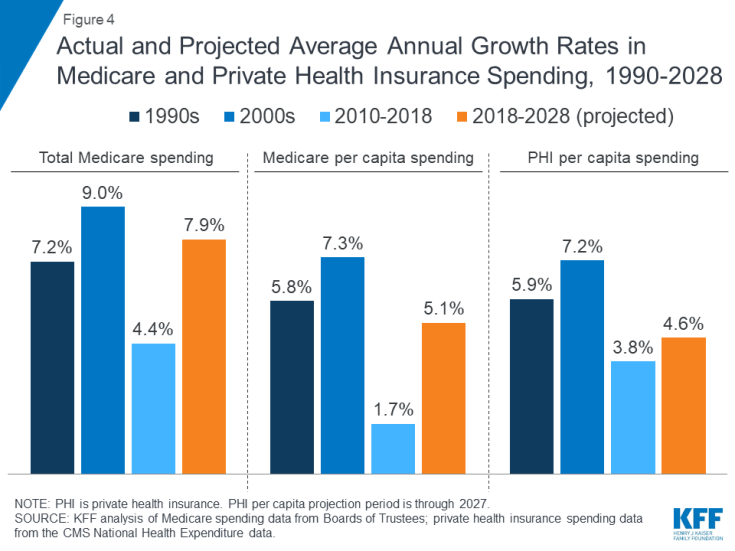 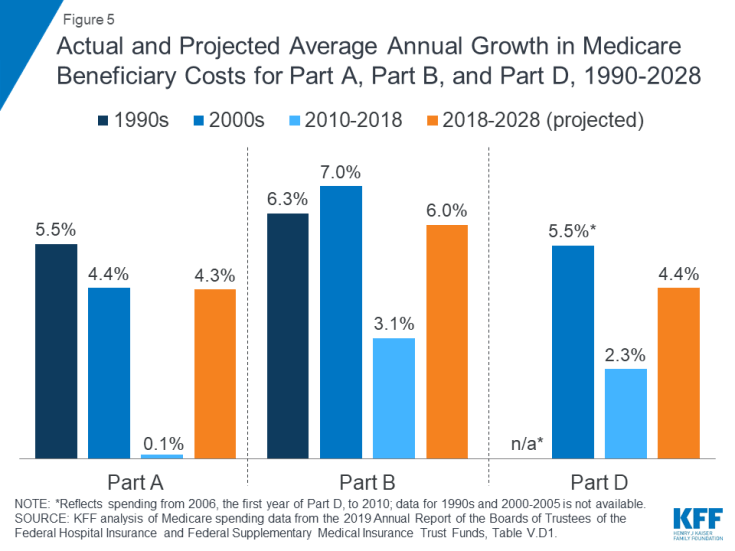 Figure 5: Actual and Projected Average Annual Growth in Medicare Beneficiary Costs for Part A, Part B, and Part D, 1990-2028

Slower growth in Medicare spending in recent years can be attributed in part to policy changes adopted as part of the Affordable Care Act (ACA) and the Budget Control Act of 2011 (BCA). The ACA included reductions in Medicare payments to plans and providers, increased revenues, and introduced delivery system reforms that aimed to improve efficiency and quality of patient care and reduce costs, including accountable care organizations (ACOs), medical homes, bundled payments, and value-based purchasing initiatives. The BCA lowered Medicare spending through sequestration that reduced payments to providers and plans by 2 percent beginning in 2013.

In addition, although Medicare enrollment has been growing between 2 percent and 3 percent annually for several years with the aging of the baby boom generation, the influx of younger, healthier beneficiaries has contributed to lower per capita spending and a slower rate of growth in overall program spending.

Short-Term Spending Projections for the Next 10 Years

While Medicare spending is expected to continue to grow more slowly in the future compared to long-term historical trends, Medicare’s actuaries project that future spending growth will increase at a faster rate than in recent years, in part due to growing enrollment in Medicare related to the aging of the population, increased use of services and intensity of care, and rising health care prices. 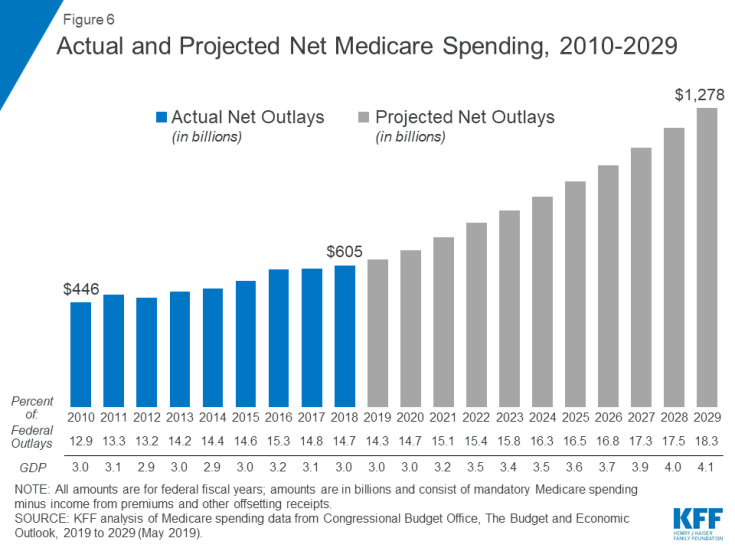 Spending Growth Rate Projections for the Next 10 Years

Over the longer term (that is, beyond the next 10 years), both CBO and OACT expect Medicare spending to rise more rapidly than GDP due to a number of factors, including the aging of the population and faster growth in health care costs than growth in the economy on a per capita basis. According to CBO’s most recent long-term projections, net Medicare spending will grow from 3.0 percent of GDP in 2019 to 6.0 percent in 2049.

Over the next 30 years, CBO projects that “excess” health care cost growth—defined as the extent to which the growth of health care costs per beneficiary, adjusted for demographic changes, exceeds the per person growth of potential GDP (the maximum sustainable output of the economy)—will account for half of the increase in spending on the nation’s major health care programs (Medicare, Medicaid, and subsidies for ACA Marketplace coverage), and the aging of the population will account for the other half.

How is Medicare Financed? 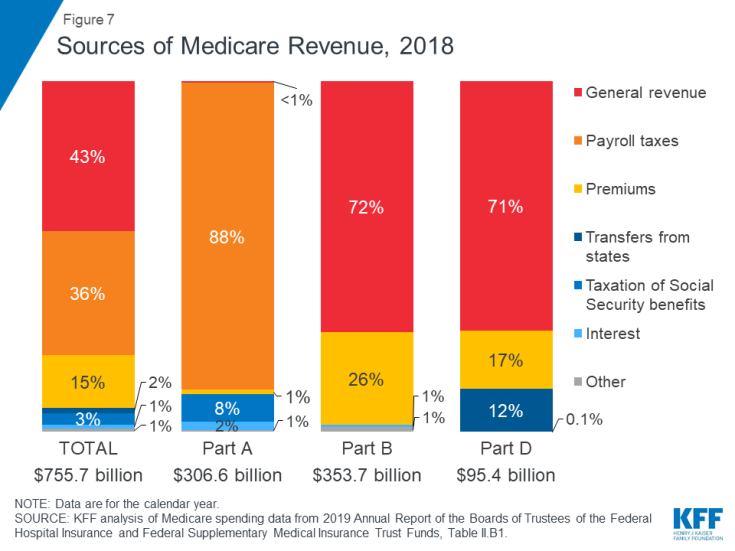 Medicare’s financial condition can be assessed in different ways, including comparing various measures of Medicare spending—overall or per capita—to other spending measures, such as Medicare spending as a share of the federal budget or as a share of GDP, as discussed above, and estimating the solvency of the Medicare Hospital Insurance (Part A) trust fund.

The solvency of the Medicare Hospital Insurance trust fund, out of which Part A benefits are paid, is one way of measuring Medicare’s financial status, though because it only focuses on the status of Part A, it does not present a complete picture of total program spending. The solvency of Medicare in this context is measured by the level of assets in the Part A trust fund. In years when annual income to the trust fund exceeds benefits spending, the asset level increases, and when annual spending exceeds income, the asset level decreases. When spending exceeds income and the assets are fully depleted, Medicare will not have sufficient funds to pay all Part A benefits.

Each year, Medicare’s actuaries provide an estimate of the year when the asset level is projected to be fully depleted. In the 2019 Medicare Trustees report, the actuaries projected that the Part A trust fund will be depleted in 2026, the same year as their 2018 projection and three years earlier than their 2017 projection (Figure 8). The actuaries estimate that Medicare will be able to cover 89 percent of Part A costs from payroll tax revenue in 2026. 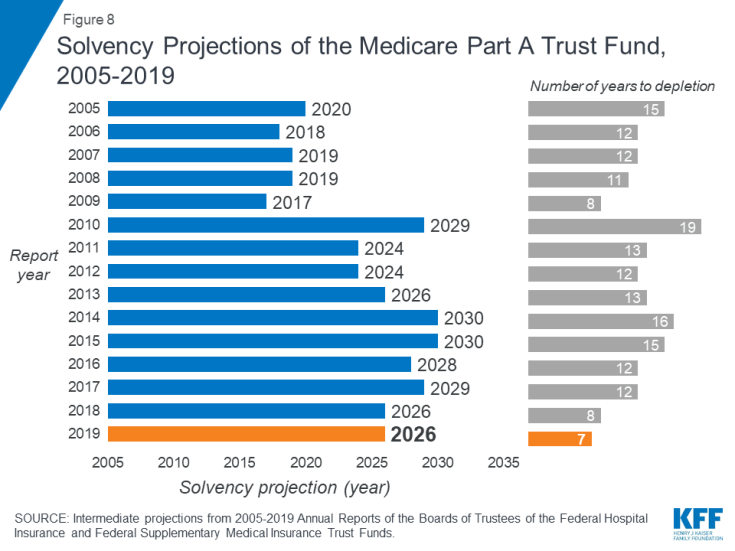 In the 2018 and 2019 Medicare Trustees reports, the actuaries attributed the earlier depletion date to several factors, including legislative changes enacted since the 2017 report that will reduce revenues to the Part A trust fund and increase Part A spending:

In general, Part A trust fund solvency is also affected by the level of growth in the economy, which affects Medicare’s revenue from payroll tax contributions, by overall health care spending trends, and by demographic trends—of note, an increasing number of beneficiaries, especially between 2010 and 2030 when the baby boom generation reaches Medicare eligibility age, and a declining ratio of workers per beneficiary making payroll tax contributions.

Part B and Part D do not have financing challenges similar to Part A, because both are funded by beneficiary premiums and general revenues that are set annually to match expected outlays. Expected future increases in spending under Part B and Part D, however, will require increases in general revenue funding and higher premiums paid by beneficiaries.

Although Medicare spending is on a slower upward trajectory now than in past decades, total and per capita annual growth rates are trending higher than their historically low levels of the past few years. The aging of the population, growth in Medicare enrollment due to the baby boom generation reaching the age of eligibility, and increases in per capita health care costs are leading to growth in overall Medicare spending. At the same time, recent legislative changes, including repeal of the ACA’s individual mandate and repealing IPAB, have worsened the short-term outlook for the Medicare Part A trust fund and have led to projections of higher Medicare spending in the future.

A number of changes to Medicare have been proposed in the past to address the fiscal challenges posed by the aging of the population and rising health care costs. Lately, policymakers have been focused more narrowly on policy options to control Medicare prescription drug spending, rather than on broader proposals to reduce the growth in Medicare spending. And there has been little discussion of revenue options that could be considered to help finance care for Medicare’s growing and aging population, including raising the Medicare payroll tax or increasing other existing taxes. Meanwhile, Medicare has featured prominently in the 2020 presidential campaign, with proposals from some Democratic candidates to expand on it as part of a Medicare-for-all plan, and ideas from others to allow people to buy into it.

The prospects for proposals that would affect Medicare’s financial outlook are unknown, but they will require careful deliberation over the effects on not only the program’s finances but also its growing number of beneficiaries.