With efforts to repeal and replace the Affordable Care Act (ACA) apparently on hold, some policymakers may ramp up efforts to strengthen the individual market, particularly in areas with few if any insurers. During the recent debate, a fair amount of attention was focused on counties at risk of having no health insurers in the ACA markets in 2018. As of July 31, 2017, 19 ACA marketplaces nested in mostly rural parts of Nevada, Indiana, and Ohio are at risk of having no insurer next year, according to the latest Kaiser Family Foundation analysis. Critics of the ACA say that the potential lack of insurers in these counties offers proof that the ACA is failing. But, does it? 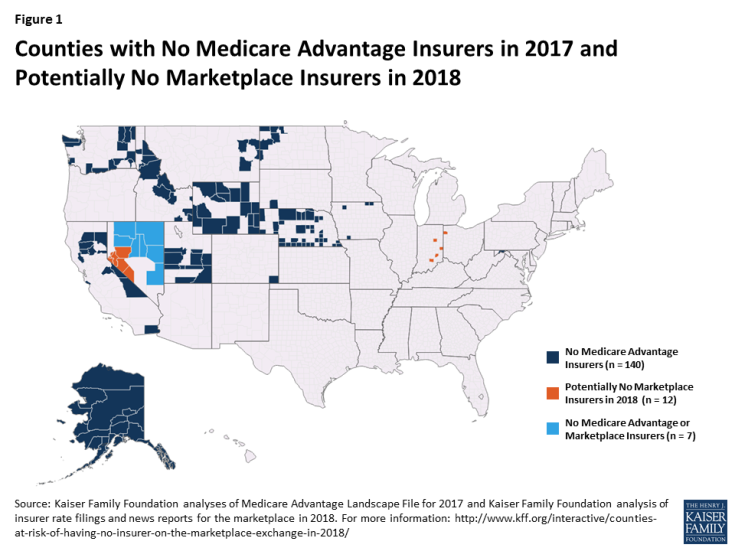 In fact, 147 counties, across 14 states, have no Medicare Advantage insurer at all this year – nearly 8 times the number of counties that may not have a marketplace insurer in 2018.1 These counties tend to be rural, with few people on Medicare, and relatively few health care providers – conditions that are generally sub-optimal for private health insurance markets. It is not entirely clear why insurers are not offering Medicare Advantage plans in these mostly rural counties, but it could be because they have less leverage to negotiate rates with hospitals and other health care providers, making these counties potentially less profitable than others. Of course, there is less distress about the lack of Medicare Advantage insurers in these counties because people can always get coverage under traditional Medicare. There is no similar option in the ACA marketplaces.

In other words, insurers’ lack of interest in offering coverage in the ACA marketplaces of these 19 counties may have less to do with the ACA and more to do with the characteristics of those counties, more generally. As policymakers consider ways to improve access to health insurance, areas that historically have had difficulty attracting private insurers, which are often rural, may require a special approach.