Policymakers, researchers, and the media have periodically raised questions about the ease or difficulty that Medicare patients experience when trying to find physicians who will see them. Previous studies show that the vast majority of physicians accept Medicare, but the proportion taking new Medicare patients is smaller, particularly among primary care physicians compared with specialists.1 Primary care is especially important for people with Medicare—55 million seniors and adults with permanent disabilities—because they are significantly more likely than others to have multiple chronic conditions.

Patient acceptance by type of insurance 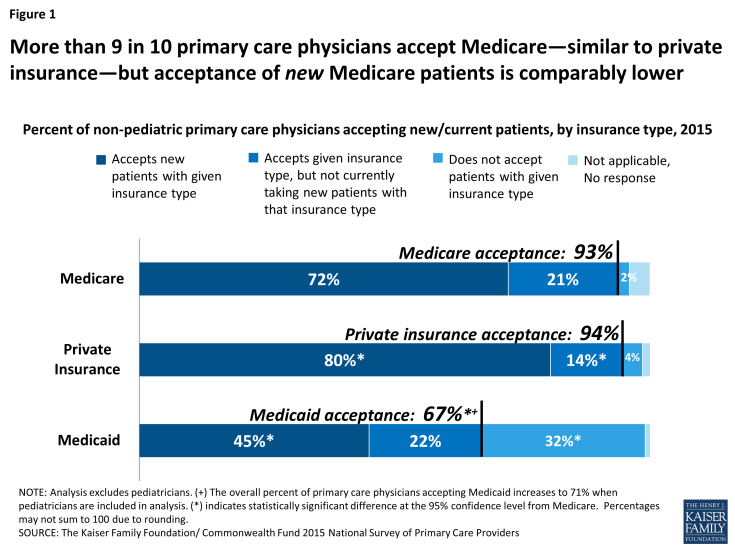 Compared with Medicare and private insurance, a lower share of non-pediatric primary care physicians—67 percent—say they accept Medicaid, the state-federal program that focuses primarily on coverage for children and adults with low-incomes. If pediatricians were included in the analysis of Medicaid acceptance, the share of physicians accepting Medicaid increases to 71 percent, reflecting the higher rate of Medicaid acceptance among pediatricians—84 percent. (Children account for almost half of the Medicaid-covered population.2) Further analysis of Medicaid acceptance among primary care physicians is discussed in a recently released issue brief by the Kaiser Family Foundation and the Commonwealth Fund.3 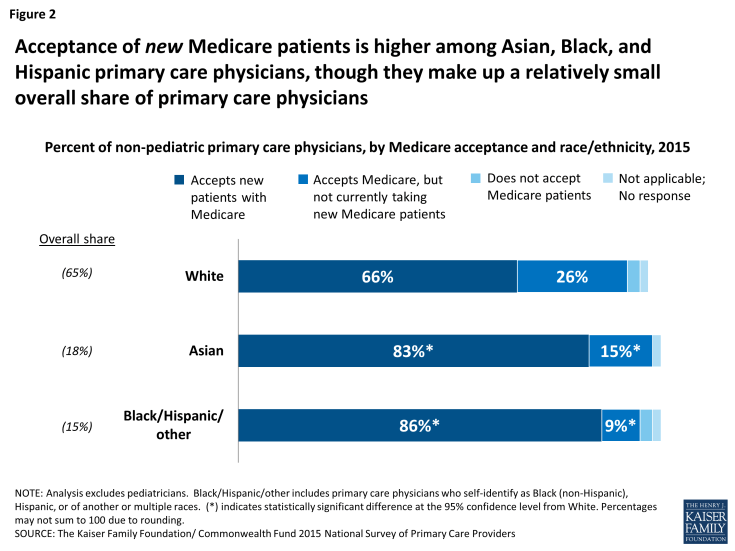 About two-thirds (67 percent) of primary care physicians age 55 or older say they accept new Medicare patients compared with about three-quarters (76 percent) of primary care physicians under age 55 (Figure 3). Younger doctors may be more likely to be building their patient caseloads and, therefore, may be more willing to take new patients. Alternatively, older physicians may have fuller practices and have less capacity to accept new patients. In fact, 78 percent of non-pediatric physicians age 55 and older say they are accepting new patients (regardless of insurance) compared with 83 percent among their younger counterparts (not shown). 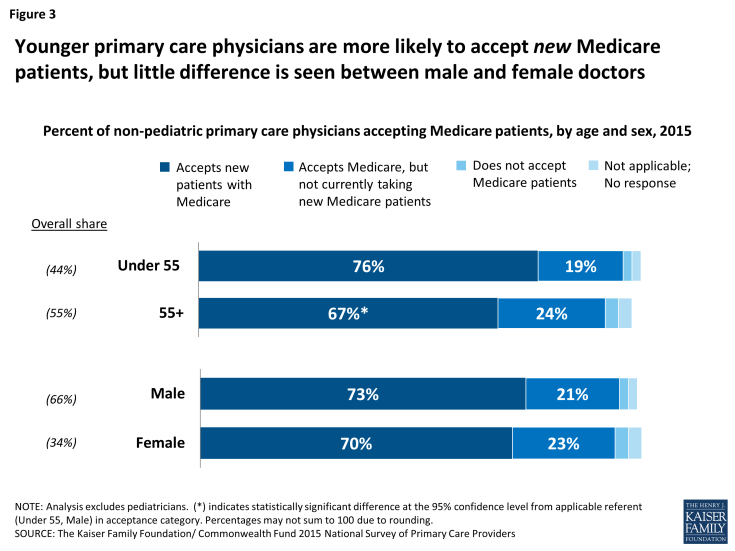 In rural areas, a somewhat higher share of primary care physicians (81 percent) report accepting new Medicare patients relative to their counterparts who practice in cities (72 percent), but differences from cities compared to suburban areas or small towns are not statistically significant (Appendix Table 1). Further analysis by the demographics of physicians’ patient caseloads (income and race, for example), type of practice (such as, hospital-owned or independent practice), does not reveal notable differences regarding acceptance of new Medicare patients. Appendix Table 1 provides these results in more detail. 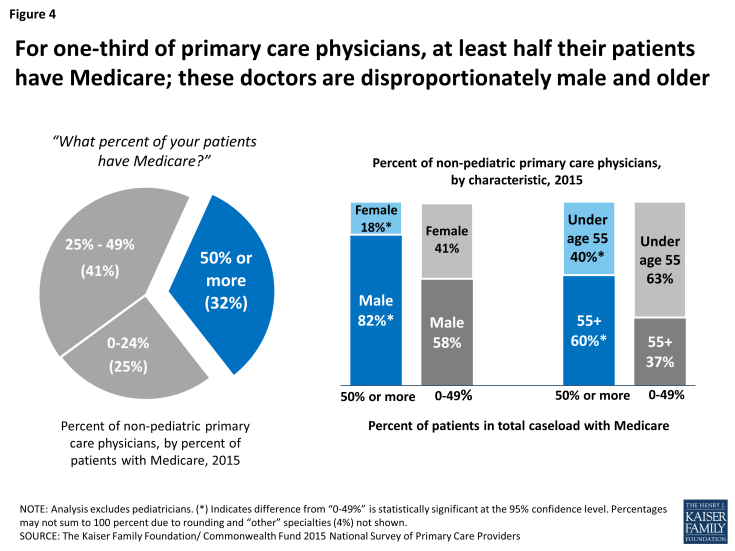 Figure 4: For one-third of primary care physicians, at least half their patients have Medicare; these doctors are disproportionately male and older

With the Medicare population aging and increasing by about 2 million each year, efforts to monitor Medicare beneficiaries’ access to primary care are critical. In addition to physician surveys, including the one used for this Data Note, patient surveys are useful to draw a complete picture of access to care. In recent years, national patient-level surveys find that the large majority of Medicare beneficiaries report that they have a usual source of care, can find new doctors when they need one, and can get timely appointments, particularly if experiencing an illness or injury.7 Nonetheless, subsets of Medicare beneficiaries—including beneficiaries with no supplemental insurance or Medicaid and beneficiaries under age 65 living with a permanent disability—report experiencing higher rates of problems finding doctors.8 Further analysis of differences between communities across the country may reveal local market-level variation in access to primary care and could have further policy implications for Medicare.