During the Medicare open enrollment period from October 15 to December 7 each year, beneficiaries can enroll in a plan that provides Part D prescription drug coverage, either a stand-alone prescription drug plan (PDP) for people in traditional Medicare, or a Medicare Advantage plan that covers all Medicare benefits, including prescription drugs (MA-PD). In 2022, 49 million of the 65 million people covered by Medicare are enrolled in Part D plans, with more than half (53%) enrolled in MA-PDs and 47% in PDPs. This issue brief provides an overview of the Medicare Part D marketplace in 2023 and key trends over time, focusing primarily on PDPs. (A separate overview of the 2023 Medicare Advantage market is also available.) The brief also describes the provisions in the Inflation Reduction Act of 2022 that affect the Medicare Part D marketplace beginning in 2023. Unless otherwise noted, weighted estimates are based on June 2022 enrollment (see Methods box for additional details).

PDP enrollment is expected to be concentrated in a small number of firms in 2023, as it has been every year. Based on June 2022 enrollment, more than 8 out of 10 PDP enrollees (82%) in 2023 are projected to be in PDPs operated by just four firms: CVS Health, Centene, UnitedHealth, and Humana. All four firms offer PDPs in all 34 PDP regions in 2023.

Beneficiaries in each state will have a choice of multiple PDPs, ranging from 19 PDPs in New York to 28 PDPs in Arizona, plus multiple MA-PDs offered at the local level (Figure 3, Table 1).

Availability of Insulin For $35 Per Month

In 2023, under a provision in the Inflation Reduction Act, Part D enrollees will pay no more than $35 per month for covered insulin products in all Part D plans. This new requirement builds on a current Innovation Center model, the Part D Senior Savings Model, in which only participating enhanced Part D drug plans cover insulin products at a monthly copayment of $35 in the deductible, initial coverage, and coverage gap phases of the Part D benefit. In 2023, a total of 2,881 Part D plans will participate in this model (a 33% increase over 2022), including 324 PDPs and 2,557 MA-PDs (including segmented plans). While this model will continue in 2023, beneficiaries do not need to enroll in one of the model-participating plans to benefit from the $35 monthly copay cap for insulin. Under the new Inflation Reduction Act requirement, Part D plans are not required to cover all available insulin products at the $35 monthly copayment amount, only those insulin products that are covered on a plan’s formulary.

The estimated national average monthly PDP premium for 2023 is projected to be $43, a 10% increase from $39 in 2022, weighted by June 2022 enrollment (Table 2) – a rate of increase that outpaces both the current annual inflation rate and the Social Security cost-of-living adjustment for 2023. It is likely that the actual average weighted premium for 2023, after accounting for enrollment choices by new enrollees and plan changes by current enrollees, will be lower than this estimated average. CMS reported that the average premium for basic Part D coverage offered by both PDPs and MA-PDs will be an estimated $31.50 in 2023. Our premium estimate is higher because it is based on PDPs only (excluding MA-PDs, which have substantially lower premiums than PDPs) and includes PDPs offering both basic and enhanced coverage (enhanced plans, which account for 60% of all PDPs in 2022, have higher premiums than basic plans, on average).

PDP premiums will vary widely across plans in 2023, as in previous years. Among the 16 national PDPs, there is a difference of more than $1,200 in annual premiums between the highest-premium PDP and the lowest-premium PDP. At the high end, the monthly premium for AARP MedicareRx Preferred will be $111, totaling more than $1,300 annually. At the low end, the monthly premium for SilverScript SmartSaver will be $6, or $67 annually (Figure 4, Table 2).

Monthly premiums are increasing in 2 of the top 3 PDPs ranked by total PDP enrollment:

Most Part D stand-alone drug plans in 2023 (62% of PDPs) will offer enhanced benefits for a higher average monthly premium, and most non-LIS PDP enrollees (75%) are enrolled in enhanced plans, based on June 2022 enrollment. Enhanced benefits can include a lower (or no) deductible, reduced cost sharing, or a higher initial coverage limit than under the basic benefit design. The average premium in 2023 for enhanced benefit PDPs is $48, which is $10 (28%) more than the monthly premium for PDPs offering the basic benefit ($37) (Figure 5).

While the average weighted monthly PDP premium is increasing by $4 between 2022 and 2023 (from $39 to $43), 2.1 million non-LIS enrollees (16%) will see a premium increase of $10 or more per month – or at least $120 more annually if they remain in their current plan. Substantially fewer non-LIS enrollees (0.1 million, or 1%) will see a premium reduction of the same magnitude. Nearly one-third (32%) of non-LIS enrollees (4.2 million) are projected to pay monthly premiums of at least $60 if they stay in their current plans, or more than $700 annually, including 1.6 million (12% of non-LIS enrollees) projected to pay monthly premiums of at least $100, or at least $1,200 annually. This group includes enrollees in the AARP MedicareRx Preferred PDP, along with enrollees in several Blue Cross/Blue Shield PDPs and other PDPs that are offered in selected regions but not nationwide.

Part D Enrollees Pay Much Higher Cost Sharing for Brands and Non-preferred Drugs Than for Generic-Tier Drugs, and a Mix of Copays and Coinsurance for Different Formulary Tiers

In 2023, as in prior years, Part D enrollees will face much higher cost-sharing amounts for brands and non-preferred drugs (which can include both brands and generics) than for drugs on a generic tier, and a mix of copayments and coinsurance for different formulary tiers. The typical five-tier formulary design in Part D includes tiers for preferred generics, generics, preferred brands, non-preferred drugs, and specialty drugs. 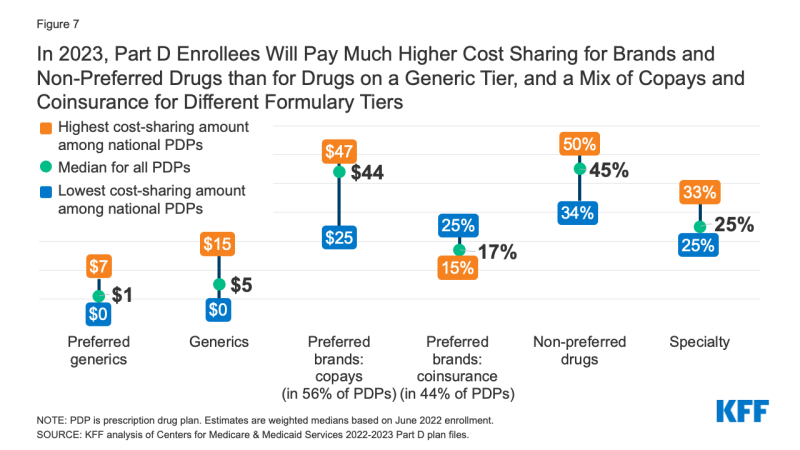 Figure 7: In 2023, Part D Enrollees Will Pay Much Higher Cost Sharing for Brands and Non-Preferred Drugs than for Drugs on a Generic Tier, and a Mix of Copays and Coinsurance for Different Formulary Tiers

Plans are implementing a mix of cost-sharing changes for 2023, with both increases and decreases in cost-sharing amounts on various formulary tiers. Among the notable changes:

In 2023, a Smaller Number of Part D Stand-Alone Drug Plans Will Be Premium-Free to Enrollees Receiving the Low-Income Subsidy (Benchmark Plans) Than in Any Year Since Part D Started

Through the Part D LIS program, enrollees with low incomes and modest assets are eligible for assistance with Part D plan premiums and cost sharing. Nearly 13 million Part D enrollees are receiving LIS, including 7.3 million (57%) in MA-PDs and 5.5 million (43%) in PDPs.

In 2023, a smaller number of PDPs will be premium-free benchmark plans – that is, PDPs available for no monthly premium to Medicare Part D enrollees receiving the Low-Income Subsidy (LIS) – than in any year since Part D started in 2006, with 191 premium-free benchmark plans, or roughly a quarter of all PDPs in 2023 (Figure 8). The number of benchmark plans available in 2023 will vary by region, from three to eight (Table 1). In 2023, 89% of the 5.5 million LIS PDP enrollees are projected to be in PDPs operated by five firms: CVS Health, Centene, Humana, Cigna, and UnitedHealth (based on June 2022 enrollment).

On average (weighted by Medicare enrollment), LIS beneficiaries have five benchmark plans available to them for 2023, which is about one-fifth the average number of PDP choices available overall and the lowest average number of benchmark plan options in any year since Part D started. All LIS enrollees can select any plan offered in their area, but if they enroll in a non-benchmark plan, they must pay some portion of their chosen plan’s monthly premium. In 2023, nearly one-fourth (24%) of all LIS PDP enrollees who are eligible for premium-free Part D coverage (1.0 million LIS enrollees) will pay Part D premiums averaging $25 per month unless they switch or are reassigned by CMS to premium-free plans.

Our analysis of the Medicare Part D stand-alone drug plan landscape for 2023 shows that millions of Part D enrollees without low-income subsidies will face premium and other cost increases in 2023 if they stay in their current stand-alone drug plan. There are dozens of drug plan choices available to beneficiaries in each area during this year’s open enrollment period, including both PDPs (24 plans, on average) and Medicare Advantage drug plans (35 MA-PD plans, on average). There are also somewhat fewer benchmark plan options for Part D enrollees receiving Low-Income Subsidies. A narrower set of benchmark plan options could make it more difficult for some LIS enrollees to find a premium-free plan that covers all their prescription medications.

Some Part D stand-alone drug plan enrollees who choose to stay in their current plans may see lower premiums and other costs for their drug coverage, but nearly three-fourths of non-LIS PDP enrollees will face higher premiums if they remain in their current plan, and many will also face higher deductibles and cost sharing for covered drugs. Most Part D PDP enrollees who remain in their current plan for 2023 will be in a plan with the standard (maximum) $505 deductible and will face much higher cost sharing for brands than for generic drugs, including as much as 50% coinsurance for non-preferred drugs. Some beneficiaries could see overall cost savings, including the monthly premium, deductible, and cost sharing, if they switched to a lower-premium plan, while for other beneficiaries, a higher-premium plan might better meet their needs at a lower overall total cost.

Despite these year-to-year changes in plan coverage and costs, as well as changes in beneficiaries’ health needs, other KFF analysis finds that most Medicare beneficiaries did not compare plans during a recent open enrollment period, and most Part D enrollees did not compare the coverage offered by their drug plan to other drug plans. Comparing and choosing among the wide array of Part D plans can be difficult, given that plans differ from each other in multiple ways beyond premiums, including cost sharing, deductibles, covered drugs, and pharmacy networks. Comparing Medicare Advantage drug plans may be made more difficult by the fact that not only drug coverage varies but also other features, including cost sharing for medical benefits, provider networks, and coverage and costs for supplemental benefits. Because Part D plans differ in several ways that can have a significant effect on an enrollee’s access to medications and out-of-pocket drug spending, all Part D enrollees could benefit from the opportunity to compare plans during open enrollment.

Juliette Cubanski is with KFF. Anthony Damico is an independent consultant.
Tables