For 2023, the typical beneficiary has a choice of 43 Medicare Advantage plans as an alternative to traditional Medicare, a new KFF analysis finds. That’s an increase of 5 plans on average from 2022, adding even more choices to the Medicare Advantage marketplace, which is poised to become the dominant way Medicare beneficiaries get their health coverage and care.

In addition, the typical beneficiary has a choice of 24 Medicare Part D stand-alone prescription drug plans for 2023, a second KFF analysis finds, one more than in 2022.

These findings are featured in two briefs released by KFF today that provide an overview of the Medicare Advantage and Medicare Part D marketplace for 2023, including the latest data and key trends. Medicare’s open enrollment period began Oct. 15 and runs through Dec. 7.
Medicare Advantage

More than 28 million Medicare beneficiaries – 48 percent of all eligible beneficiaries – are enrolled in Medicare Advantage plans, which are mostly HMOs and PPOs offered by private insurers. Enrollment is projected to cross the 50 percent threshold as soon as next year. 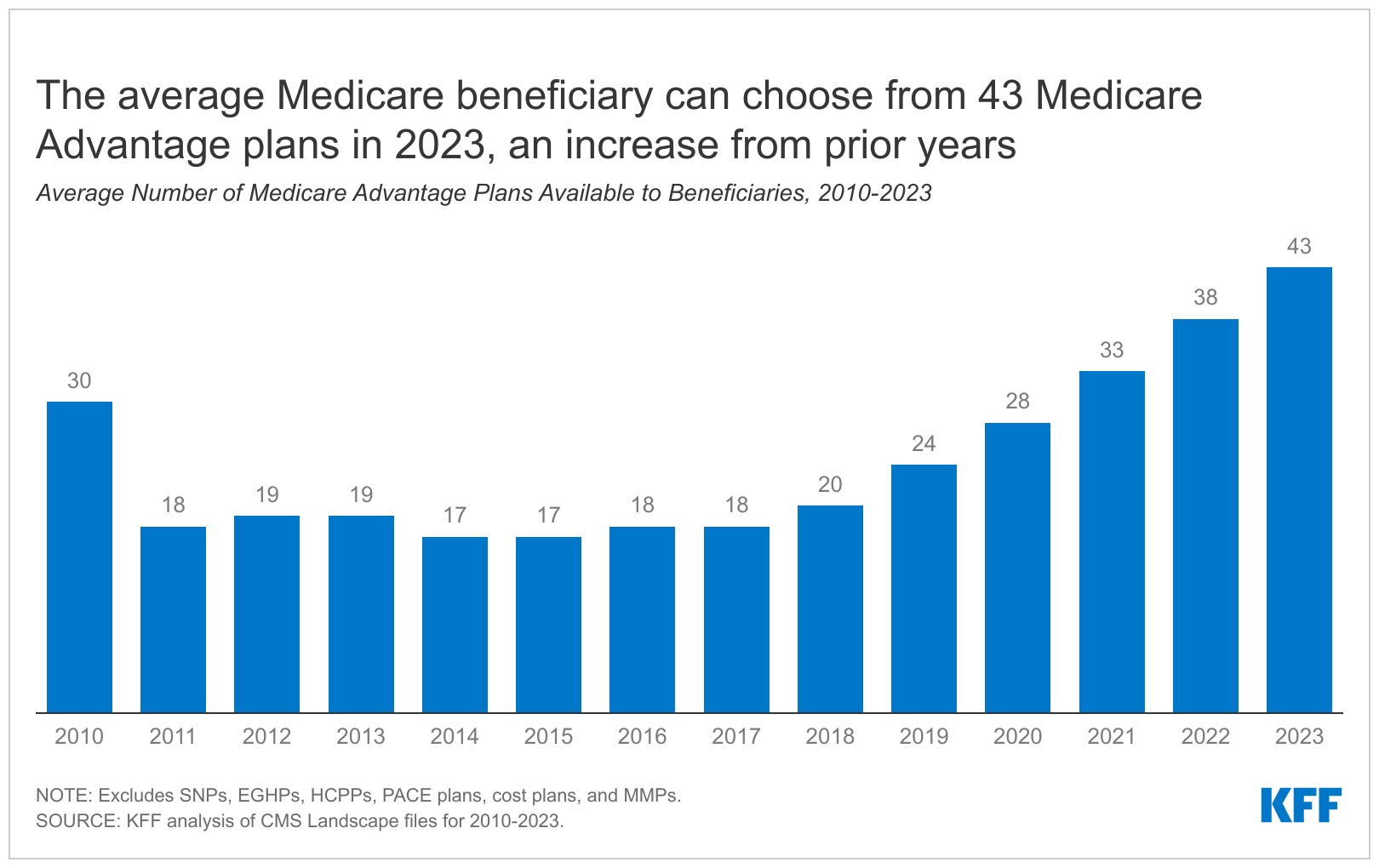 Two thirds (66%) of Medicare Advantage plans do not charge an additional premium beyond Medicare’s standard Part B premium, up from 59 percent in 2022. In 2023, nearly all plans (97% or more) offer some vision, fitness, telehealth, hearing, or dental benefits, though the scope of coverage for these services varies.

The average Medicare beneficiary has a choice of 24 stand-alone Part D drug plans for 2023, one more than in 2022. The total number of Medicare Part D stand-alone prescription drug plans that will be offered in 2023 is rising by 5 percent to 801 plans. Fifteen firms offer the plans, the lowest number in any year since Part D started.

The estimated average monthly premium for Medicare Part D stand-alone drug plans is projected to be $43 in 2023, based on current enrollment, a 10 percent increase from $39 in 2022. This rate of increase outpaces both inflation and the Social Security cost-of-living adjustment for 2023. In the stand-alone drug plan market, more than 8 out of 10 enrollees next year are projected to be in stand-alone plans operated by just four firms: CVS Health, Centene, UnitedHealth, and Humana.

Average monthly premiums for the 16 national stand-alone drug plans available in 2023 are projected to range from $6 to $111. Premiums are rising for 12 of the 16 plans, including four plans with increases exceeding $10. 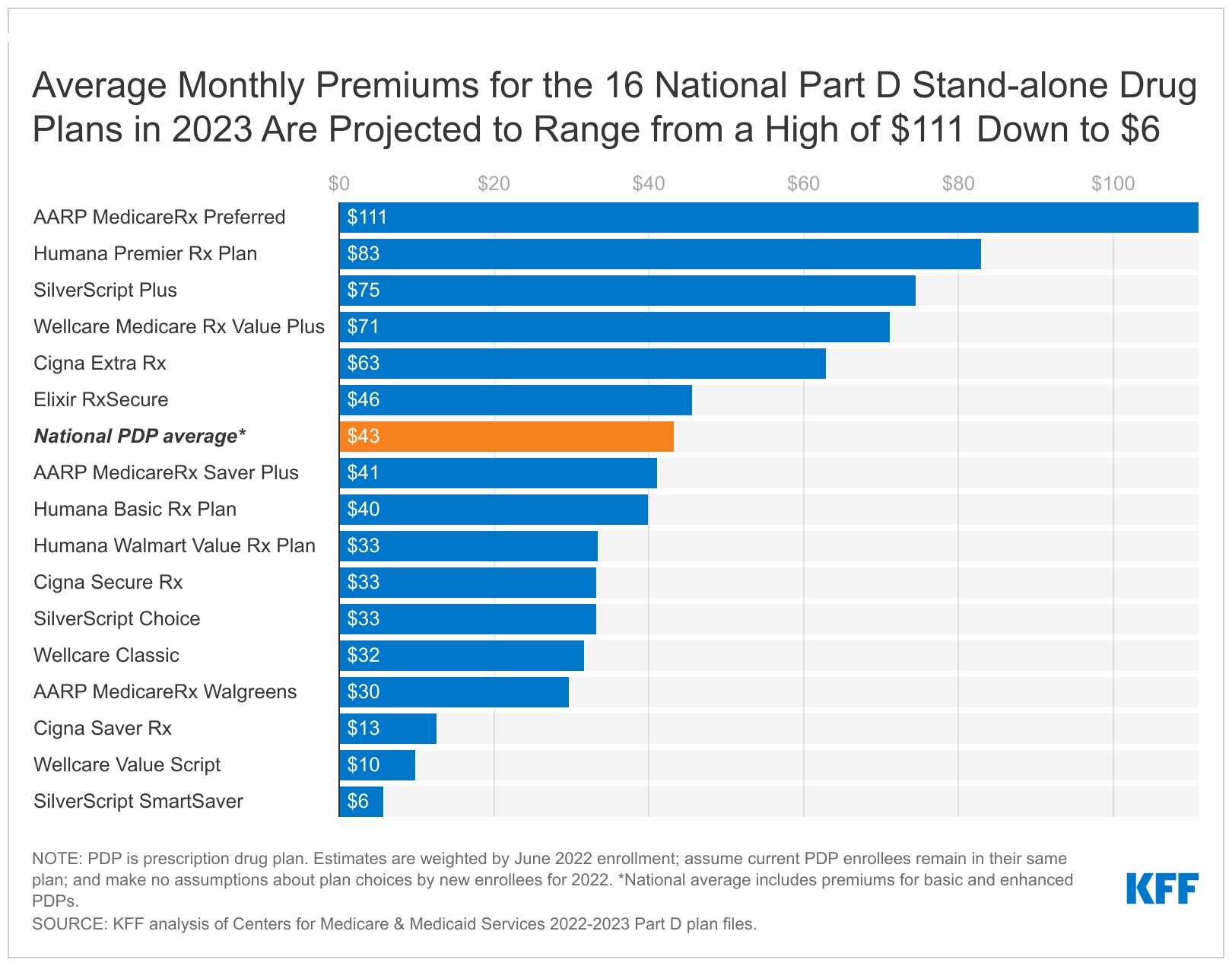 Beginning in 2023, under a provision in the Inflation Reduction Act (IRA), Part D enrollees will pay no more than $35 per month for covered insulin products in all Part D plans, and will pay no cost sharing for adult vaccines covered under Part D. Also, beginning in 2023, drug manufacturers will be required to pay rebates for drug prices that rise faster than the rate of inflation, which could help to dampen cost increases for Part D enrollees.

The new law also caps enrollees’ out-of-pocket drug spending under Part D, as of 2024, and requires Medicare to negotiate prices for some drugs, with negotiated prices first available for some Part D drugs in 2026. A recent KFF explainer summarizes these and other prescription drug provisions in the Inflation Reduction Act.

In addition to these two new Medicare Advantage and Part D analyses, KFF has updated its collection of frequently asked questions about Medicare Open Enrollment to help beneficiaries understand their options during the annual open enrollment period. Our updated overview of Part D has more information about Medicare’s prescription drug benefit in 2023 and the IRA changes over time. Recent KFF analyses show that a relatively small share of Medicare beneficiaries compared plan options or switched plans during a recent open enrollment period.