This Data Spotlight reviews national and state-level enrollment trends as of March 2015 and examines variation in enrollment by plan type and firm. It analyzes the most recent data on premiums, out-of-pocket limits, Part D cost sharing, and plans’ quality ratings for Medicare Advantage enrollees. Key findings include: 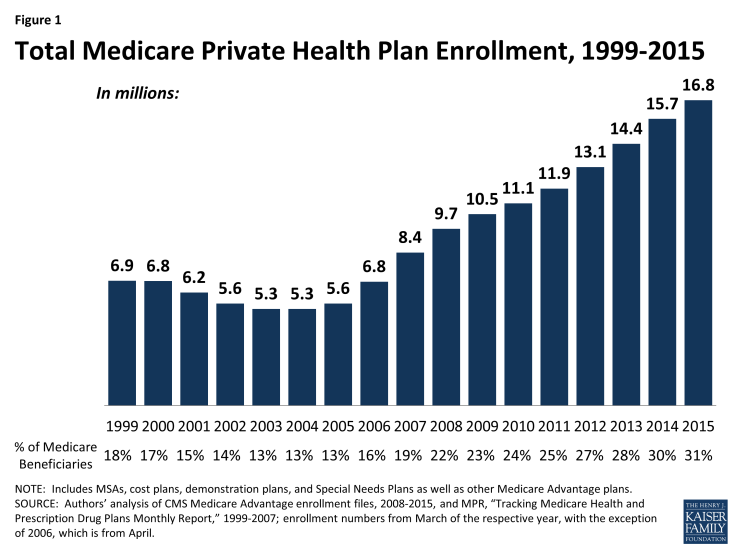 Similar to each year since 2007, about two-thirds (64%) of Medicare Advantage enrollees are enrolled in HMOs in 2015 (Figure 2). Almost one-third of enrollees are in either local PPOs (24%) or regional PPOs (7%), 2 percent are in PFFS plans, and 3 percent are in other types of plans, including cost plans and Medicare Medical Savings Accounts (MSAs). 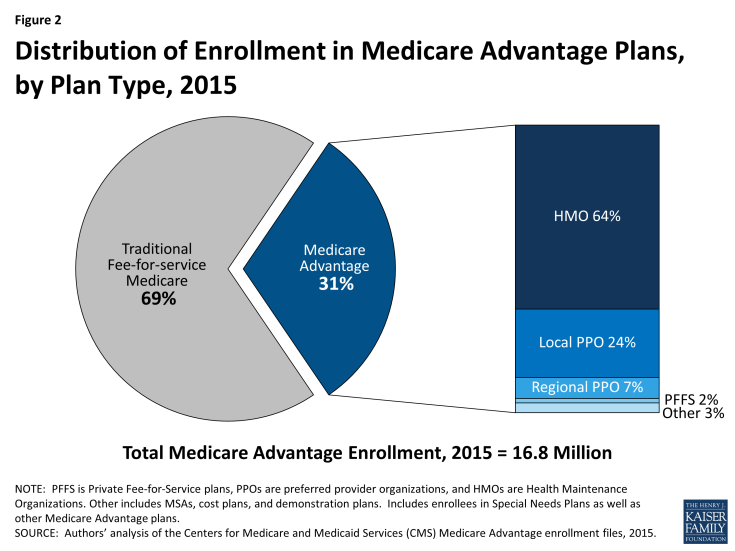 PFFS plans were the primary alternative to HMOs from 2007 through 2009 but their role in the Medicare Advantage market has now been more than eclipsed by that of PPOs (especially local PPOs) since the Medicare Improvements for Patients and Providers Act (MIPPA) of 2008 required PFFS plans (with some county-specific exceptions) to have networks of providers by 2011.4 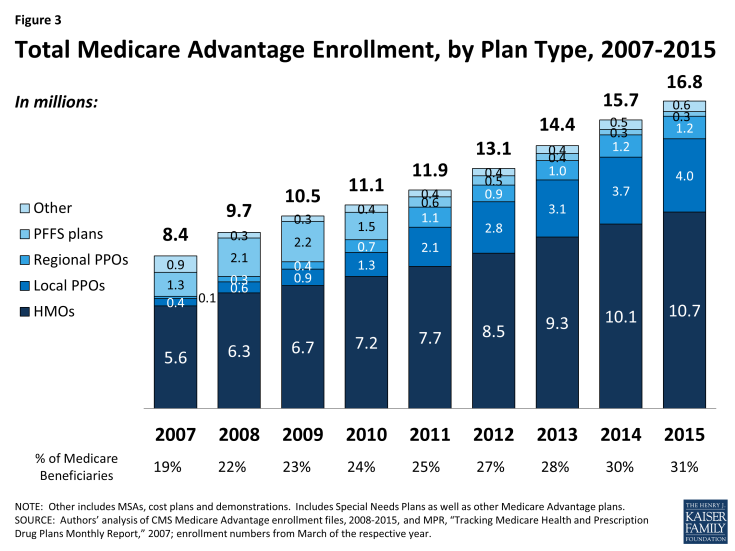 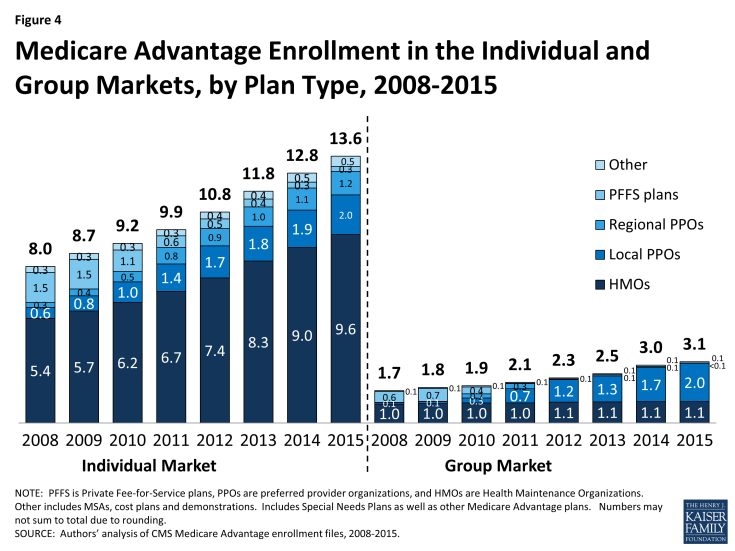 Figure 4: Medicare Advantage Enrollment in the Individual and Group Markets, by Plan Type, 2008-2015

Employers (and their retirees) appear to continue to favor local PPOs over HMOs, which contrasts with the individual market. Most of the enrollment growth in the group market between 2014 and 2015 was in local PPOs, with enrollment increasing to 2.0 million from 1.7 million.

Enrollment increased in virtually all states in 2015, with the exception of Maryland in which enrollment declined by less than 1 percent (Table 1). Five states and the District of Columbia saw particularly large increases in enrollment (19% in SD, 18% in ND, 14% in DC, 14% in GA, 14% in IL, and 14% in ME). High rates of growth typically reflect small states with limited prior year enrollment whose growth rates are sensitive to small changes in enrollment; for example, South Dakota has the highest growth rate (19%) and has historically had relatively low enrollment in Medicare Advantage plans.

While HMOs are the most common type of plan nationally, they are not equally important in all states. For example, HMOs constitute 75 percent of Medicare Advantage enrollment in 11 states (AZ, CA, CO, CT, LA, MA, NJ, NV, RI, UT, and WA) but less than half of Medicare enrollment in 25 states, 6 of whom (AK, MT, ND, SD, VT, and WV) have less than 10 percent HMO enrollment (see Table A1). Geographic variation in the composition of Medicare Advantage plans is important since HMOs tend to perform better on certain measures of efficiency and tend to have lower premiums.10 In addition, there is more evidence on the quality of care in HMOs than in other model types.11

Enrollment Growth by County, based on Medicare Spending Quartiles.

Enrollment continues to grow relatively equally across counties in each of the four quartiles of traditional Medicare spending (Table A3). Between 2014 and 2015, enrollment grew by 6 percent in both the highest quartile counties and in the lowest quartile counties, and by 7 percent each in the two middle quartiles. Overall penetration is also similar across the quartiles (ranging from 28% to 35%). Thus, enrollment continues to grow across counties, irrespective of changes in payments that differ according to traditional Medicare spending. 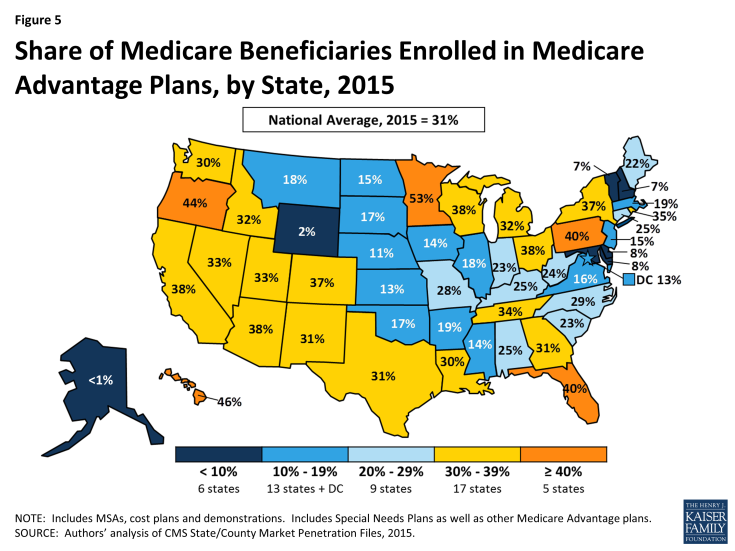 Medicare Advantage enrollees are responsible for paying the Part B premium, in addition to any premium charged by the plan. The Medicare Advantage premium paid by enrollees reflects the difference between the plan’s costs of providing Part A and B benefits and any supplemental benefits offered, and the federal payment to the plan for the benefits. Plans receive a percentage of the difference between their bid and the maximum federal payment (known as a rebate) and are required to use this amount to offer extra benefits, reduce cost sharing, or reduce the Part B premium. If the plan offers the Part D drug benefit, as most plans do, the plan may also use the rebate to reduce the Part D premium.

The average MA-PD enrollee pays a monthly premium of about $38 in 2015, a $3 per month (7%) increase from 2014 (Figure 6). Actual premiums paid by enrollees vary by plan type, locale, and characteristics, such as relative breadth of the provider network and/or benefits.12 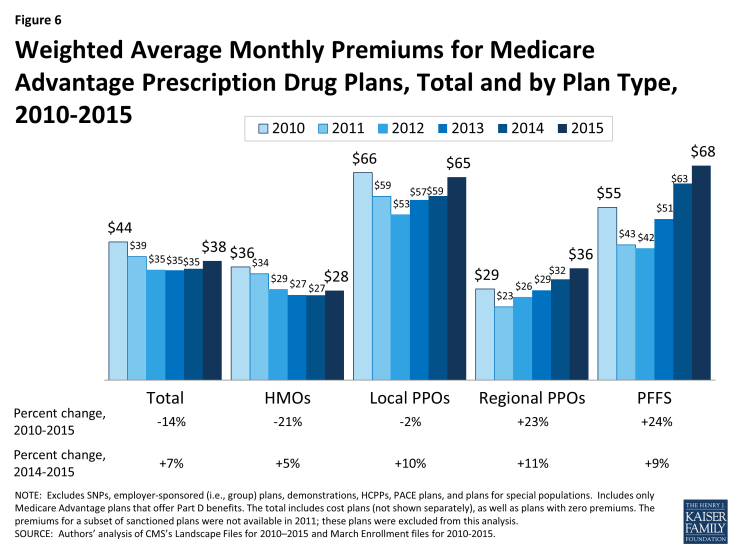 As in prior years, most Medicare beneficiaries (78%) had a choice of at least one MA-PD that charged no additional premium for coverage, other than the monthly Part B premium, also known as “zero premium plans”.13 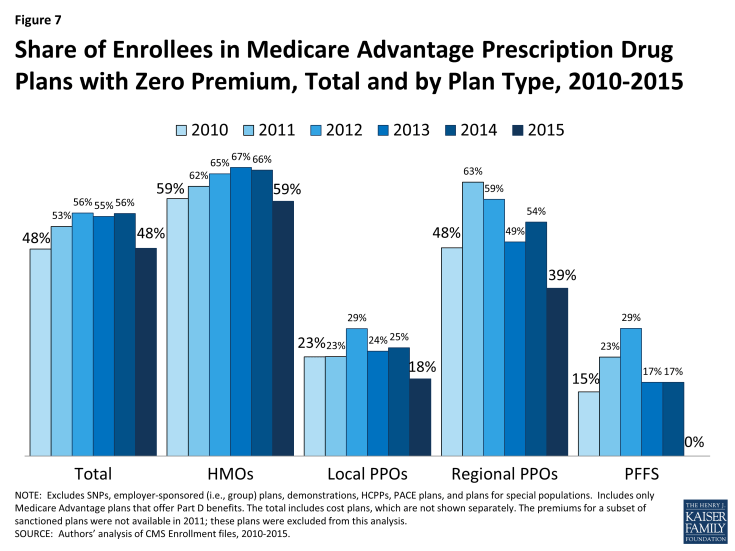 Comparing premiums across states is complicated by the fact that premiums reflect many factors, including the underlying costs of care in a given county relative to the national average, the level of payments to Medicare Advantage plans in the area, and firms’ strategy about whether to use plans’ rebates to offer extra benefits, reduce cost-sharing, or lower premiums. Additionally, as previously discussed, premiums vary across plan types, with HMOs having the lowest average premiums, and enrollment by plan type varying across states. 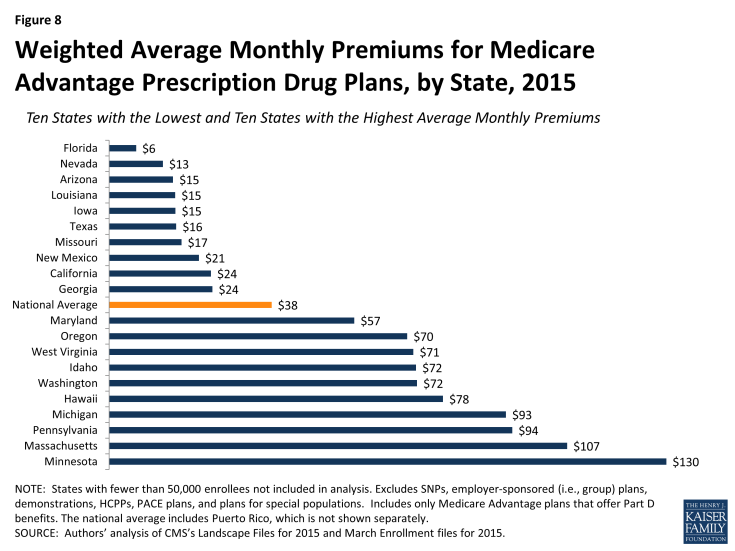 Medicare Advantage plans are required to provide all Medicare covered services. In addition, plans are required to limit enrollees’ out-of-pocket expenditures for Part A and Part B covered services and may provide additional benefits that are not covered by traditional Medicare. Out-of-pocket limits define ultimate financial liability for Medicare benefits for in-network Medicare-covered benefits and are especially important for people with relatively high health expenses. Actual financial liability will vary with a beneficiary’s health status and use of medical care.

Although traditional Medicare does not include an annual out of pocket limit on cost sharing for Medicare A and B benefits, the CMS began requiring all Medicare Advantage plans to have a limit no higher than $6,700 annually, and recommended a limit of $3,400 or lower, for in-network services, as of 2011.15 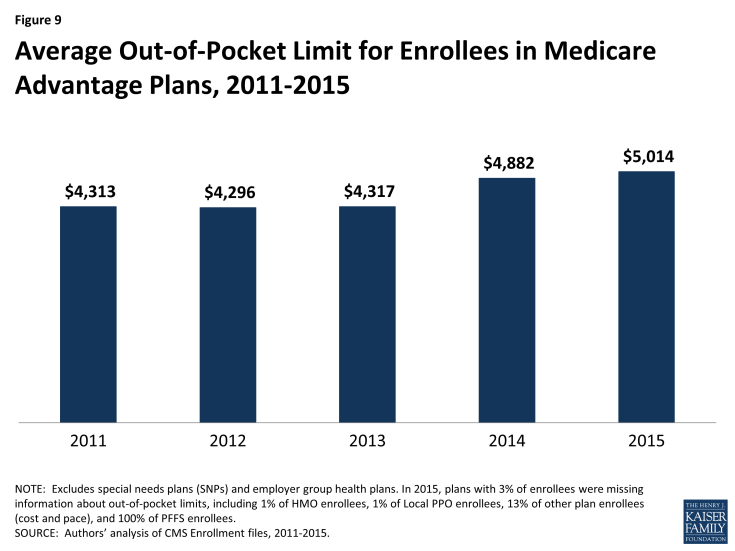 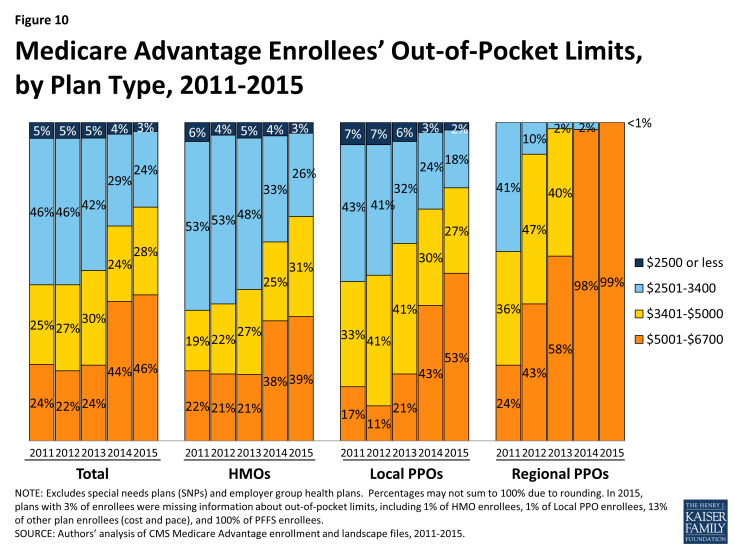 The standard Medicare Part D benefit in 2015, for both stand-alone prescription drug plans (PDPs) and MA-PDs, has a $320 deductible and 25 percent coinsurance up to an initial coverage limit of $2,960 in total drug costs, followed by a coverage gap (the so-called “donut hole”), until their total out of pocket Part D spending reaches $4,700 when the catastrophic limit kicks in and beneficiaries pay 5 percent of the cost of drugs. 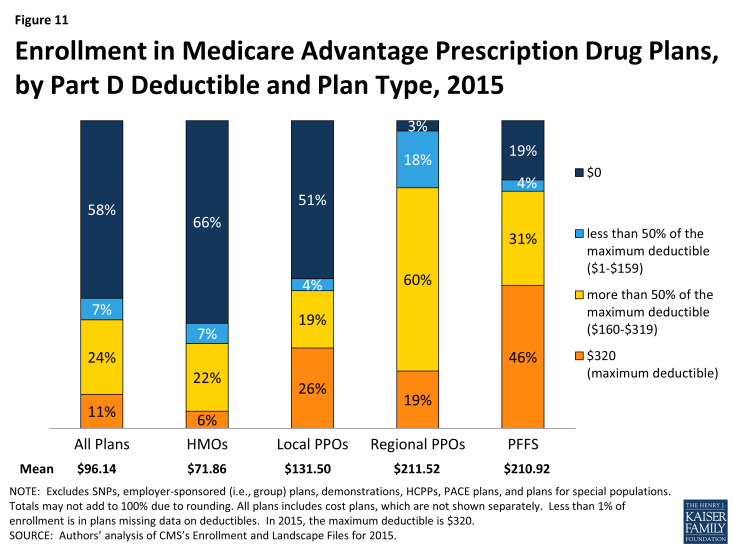 The ACA gradually closes the coverage gap by 2020. Plans have the option to close the gap before then, but few have. In 2015, 45 percent of enrollees are in plans that provide some additional coverage – beyond what is required by law – a decline from 51 percent in 2014 (Figure 12). Enrollees in plans with no additional gap coverage will pay 45 percent of the total costs of brand-name drugs and 65 percent of the total cost of generics in the gap in 2015 until they reach the catastrophic limit. A larger share of enrollees in PFFS plans (51%) and HMOs (52%) are in plans that provide some coverage in the gap, than enrollees in local PPOs (38%) or regional PPOs (8%).16 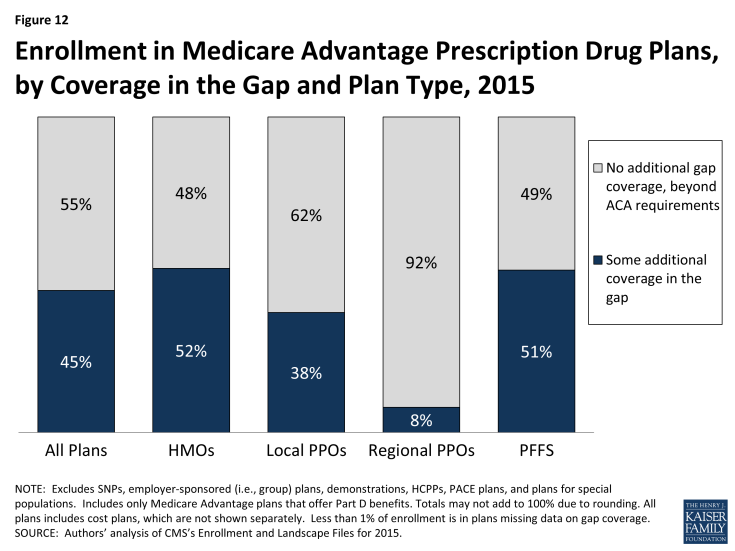 Figure 12: Enrollment in Medicare Advantage Prescription Drug Plans, by Coverage in the Gap and Plan Type, 2015

For many years, the CMS has posted quality ratings of Medicare Advantage plans to provide beneficiaries with additional information about plans offered in their area. All plans are rated on a 1 to 5 star scale, with 1 star representing poor performance, 3 stars representing average performance, and 5 stars representing excellent performance. The quality scores for Medicare Advantage plans are derived from plan and beneficiary information collected in three surveys – HEDIS®, CAHPS®, and HOS – and administrative data. CMS assigns quality ratings at the contract level, rather than for each individual plan, meaning that each plan covered under the same contract receives the same quality rating (and most contracts cover multiple plans of the same type).

In 2012, Medicare Advantage plans began receiving bonus payments based on quality ratings. These payments were initially established in the ACA and provided for bonuses to plans that receive 4 or more stars and to unrated plans beginning in 2012. In addition, CMS launched a demonstration for 2012 through 2014 that increased the size of bonuses for these plans, and also provided bonuses to plans rated as average (receiving 3 or 3.5 stars), using the same 1 to 5 star scale. CMS indicated that one goal of the demonstration was to provide an initial boost to plans in meeting the more stringent 4 star goals.17 In 2015, the bonus payments have reverted back to those that were authorized under the ACA, and plans with 3 or 3.5 stars do not receive bonus payments. Beneficiaries can enroll in a plan with 5 stars at any time during the year, not just during the annual open enrollment period. 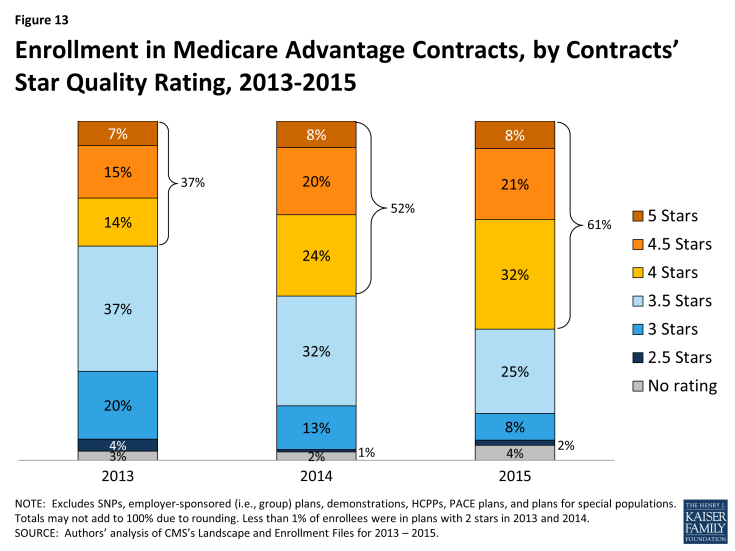 Notably, while a larger share of beneficiaries is in plans with relatively high star ratings, seniors have said in focus groups that they do not use the star ratings to select their plan.18 Nonetheless, the star ratings may be correlated with factors that seniors do use to select their plan, including provider networks, and plan benefits and costs, and thus may be correlated with enrollment. It is noteworthy that the share of beneficiaries in plans with 5 stars did not materially change between 2013 and 2015. Some have argued that the measures required to achieve 5 stars are more demanding than lower level star ratings, requiring integration that some plans find more difficult to achieve.

As in prior years, Medicare Advantage enrollment in 2015 tends to be highly concentrated among a small number of firms (Figure 14 and Table A4). In 2015, six firms or BCBS affiliates accounted for 72 percent of the market: UnitedHealthcare (20%), Humana (19%), Blue Cross Blue Shield (BCBS) affiliated plans (16%), Kaiser Permanente (8%), Aetna (7%), and Cigna (3%). Another six national firms account for 5 percent of the market, including Wellcare, HealthNet, Universal American, Munich American Holding Corporation, and Wellpoint plans not affiliated with BCBS. The remaining enrollees are in plans offered by more locally or regionally focused firms. 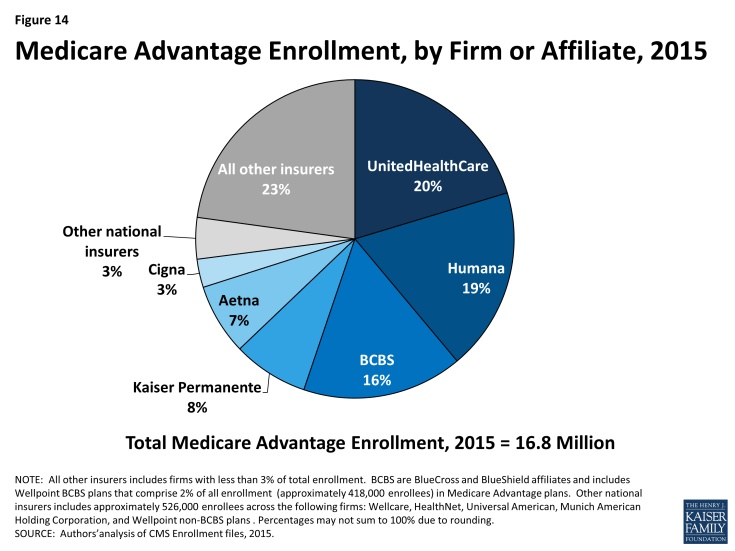 Firms differ in how they position themselves in the market, including the plan types they offer. Almost all of Kaiser Permanente’s enrollees (95%) are in HMOs with the remainder (5%) in similarly structured cost plans (Figure 15). In contrast, UnitedHealthcare’s enrollment is in HMOs, local PPOs, regional PPOs, and PFFS plans, and enrollment among plan types has shifted somewhat between 2014 and 2015. A smaller share of UnitedHealthcare’s enrollees is in HMOs in 2015 than in 2014 (57% versus 62%, respectively) and a larger share are in local PPOs (24% versus 19%, respectively). 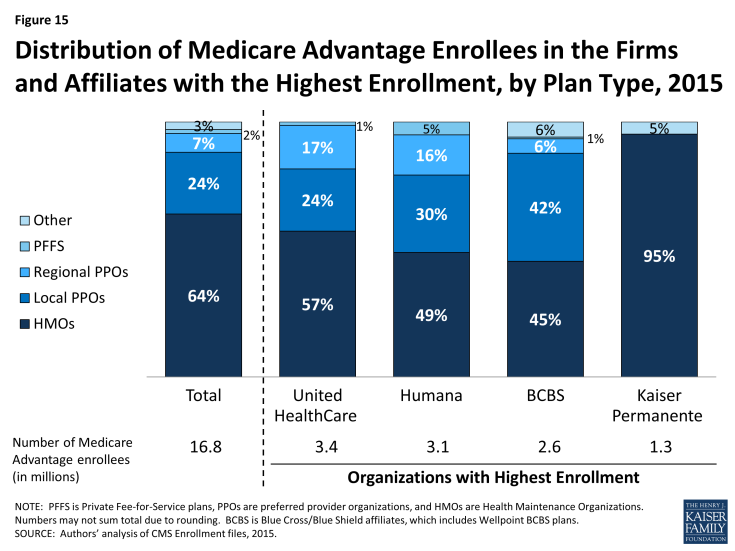 Figure 15: Distribution of Medicare Advantage Enrollees in the Firms and Affiliates with the Highest Enrollment, by Plan Type, 2015 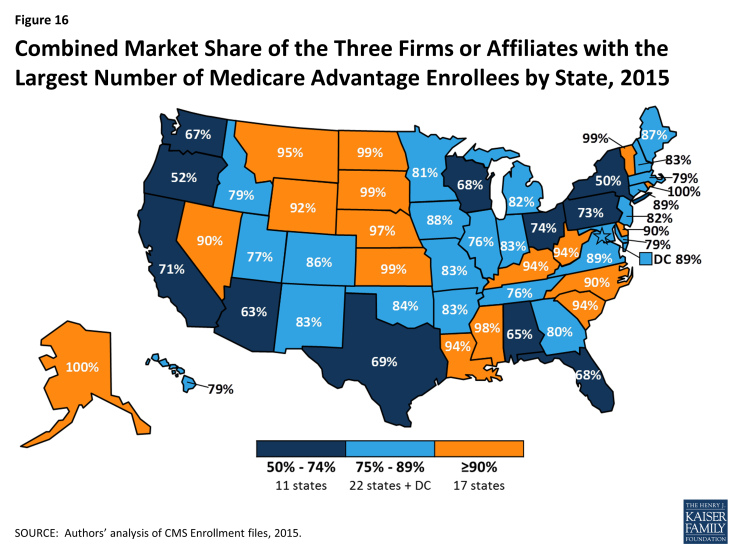 Figure 16: Combined Market Share of the Three Firms or Affiliates with the Largest Number of Medicare Advantage Enrollees by State, 2015

While Medicare Advantage premiums have remained relatively flat, out-of-pocket limits have been increasing over the past few years, providing less financial protection to Medicare enrollees with significant medial needs than they have in the past. Additional work is needed to understand plans’ cost-sharing and provider networks, including changes over time and variation across plans. A key concern is whether beneficiaries have the information they need to make fully informed health plan choices from one year to the next, taking into account changes in their plan’s coverage and/or provider network, and changes in their own health care needs.

As in prior years, enrollment in the Medicare Advantage market is concentrated among a handful of firms. Six firms or BCBS affiliates account for almost three-quarters (72%) of the market. Two firms, UnitedHealthcare and Humana, account for almost four in ten Medicare Advantage enrollees. Enrollment is even more highly concentrated in some states, with three firms or affiliates accounting for more than 90 percent of enrollment in 17 states, and one firm accounting for more than half of enrollment in 15 states and the District of Columbia. A key, unanswered question is what this market concentration means for consumers.

From the perspective of the Medicare program overall, it is clear that Medicare Advantage has become an increasingly important way in which Medicare beneficiaries receive their benefits and all signs suggest that this will only increase in the future. With such a large share of the program dependent on products offered from a relatively small number of private firms operating at the national and local levels, the ability of Centers for Medicare and Medicaid Services (CMS) to serve as a strong fiduciary for the program becomes increasingly important as well as challenging.