Medicare Advantage Enrollment Continues to Climb, but Financial Protections for Enrollees Are Eroding

Enrollment in Medicare Advantage continues to climb steadily as spending reductions enacted in the Affordable Care Act reduce historical overpayments to the private plans, according to a new analysis by the Kaiser Family Foundation. But limits on out-of-pocket spending for Medicare-covered services are rising, providing less protection for enrollees with relatively high health care expenses.

Premium growth in Medicare Advantage has been modest – premiums (weighted by enrollment) have remained relatively flat since 2011, and average $38 per month in 2015, up $3 per month from 2014.  Out-of-pocket spending limits, however, have increased in recent years, rising from an average of $4,317 in 2013 to $5,041 in 2015.  Between 2013 and 2015, the share of enrollees in plans with out-of-pocket limits above $5,000 nearly doubled to 46 percent.  Medicare Advantage plans, unlike traditional Medicare, are required to have an out-of-pocket limit for services covered under Medicare Parts A and B that is no higher than $6,700. 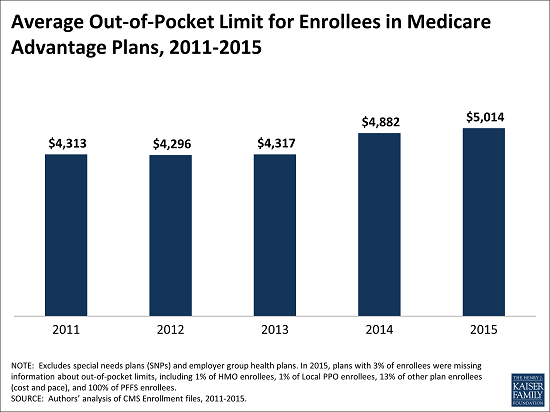 The full analysis is available online, as are the Foundation’s latest Medicare Advantage fact sheet and the newly updated Medicare Health and Prescription Drug Plan Tracker, where users can monitor trends in enrollment, market penetration and other topics for Medicare Advantage plans since 1999 and stand-alone Medicare drug plans since 2006 by state, county and other sub-state geographies.