Medicaid, the public health insurance program for low-income people, is the largest public source of health coverage in the nation. In September 2014, the program covered nearly 68 million Americans, or roughly 1 in every 5. Medicaid beneficiaries are a diverse low-income population, including pregnant women and infants, children and families, non-elderly adults without dependent children, individuals with wide-ranging disabilities, and poor seniors. They include many people who are generally healthy, but also many with complex health, long-term care, and social needs.

States design and administer their own Medicaid programs within federal rules, and states and the federal government share Medicaid costs and have shared stakes in the program. One of the most important programmatic decisions that states make is how they will deliver and pay for care for Medicaid beneficiaries. Historically, states purchased services largely on a fee-for-service basis. However, since the early 1980s and particularly in recent years, states have increasingly used various models of managed care. The dominant model is comprehensive risk-based managed care, in which states contract with managed care organizations (MCOs) to provide comprehensive acute care, and in some cases long-term services and supports as well, to Medicaid beneficiaries, and pay the MCOs a fixed monthly premium or “capitation rate” on behalf of each enrollee. This model is called risk-based managed care because, through contracts, states shift the financial risk for serving their Medicaid beneficiaries to MCOs.

Today, 39 states contract with a grand total of about 265 MCOs to provide comprehensive Medicaid services; over 90% of Medicaid beneficiaries live in these 39 states. As of September 2014, more than half of all Medicaid beneficiaries nationwide were enrolled in MCOs, and the role of MCOs in Medicaid continues to grow, as an increasing number of states adopt risk-contracting programs, and states with existing programs expand them to include larger geographic areas and beneficiaries with more complex needs, shift from voluntary to mandatory enrollment in MCOs, and move long-term services and supports into capitated arrangements. In addition, states expanding Medicaid under the Affordable Care Act (ACA) are relying largely on MCOs to serve the millions of newly eligible adults. More broadly, the ACA expansions of both Medicaid and private health insurance are fueling dynamism in the managed care market as MCOs and large managed care companies position themselves to take advantage of new opportunities. 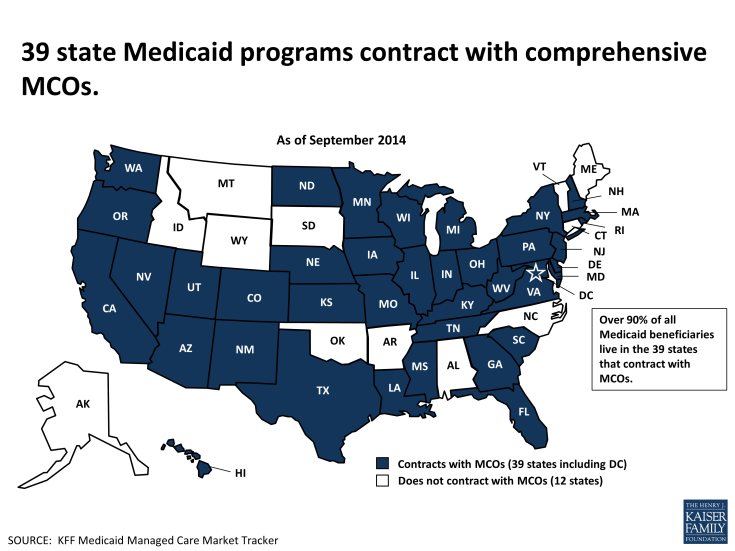 The Kaiser Family Foundation has developed the Medicaid Managed Care Market Tracker, an interactive tool that provides access to key data on numerous aspects of the Medicaid MCO market. The Tracker includes indicators at the state level and the MCO level, and it also links MCOs to their parent firms and information about them, permitting analysis at the firm level and shedding light on the broader managed care market. The Tracker includes Medicaid MCO enrollment data from all the states that publicly report this information. As of September 2014, 19 of the 39 MCO states did so. These 19 states are home to two-thirds of all Medicaid beneficiaries, and Medicaid MCO enrollees in these 19 states account for more than 45% of all Medicaid beneficiaries. Over time, as additional states make their Medicaid MCO enrollment data available, we will include it in the Tracker.

The charts that follow highlight 10 key findings on the Medicaid MCO market based entirely on analysis of data included in the Tracker. The charts provide a partial profile of the market. They also serve to illustrate the kinds of topics and questions the Tracker can be used to explore.