On January 1, 2014, many key provisions of the Affordable Care Act (ACA) will start to go into effect, including the expansion of Medicaid to low-income adults and the launch of new Medicaid eligibility and enrollment processes, which are designed to move toward a coordinated enrollment system across health coverage programs, including Medicaid, CHIP, and the new Health Insurance Marketplaces. Over the past year, states have made steady and significant progress preparing for these changes, but readiness varies considerably as 2014 nears, and implementation work and ongoing process improvements will continue into the foreseeable future. To provide greater insight into the status of implementation, this report provides an overview of key state Medicaid eligibility and enrollment policies slated to go into effect based on data released by the Centers for Medicare and Medicaid Services (CMS). (See the Appendix Tables for state-specific data.)

Medicaid Eligibility as of January 2014

The ACA, as enacted, expands Medicaid to nearly all adults at or below 138 percent of the federal poverty level (FPL) as of January 1, 2014. This expansion, however, was effectively made a state option as a result of the Supreme Court ruling on the constitutionality of the ACA, and as of October 24, 2013, 26 states, including DC, are moving forward with the expansion, while the remaining 25 states are not moving forward at this time (Figure ES-1). There is no deadline for states to adopt the expansion, and several states are still actively considering it. 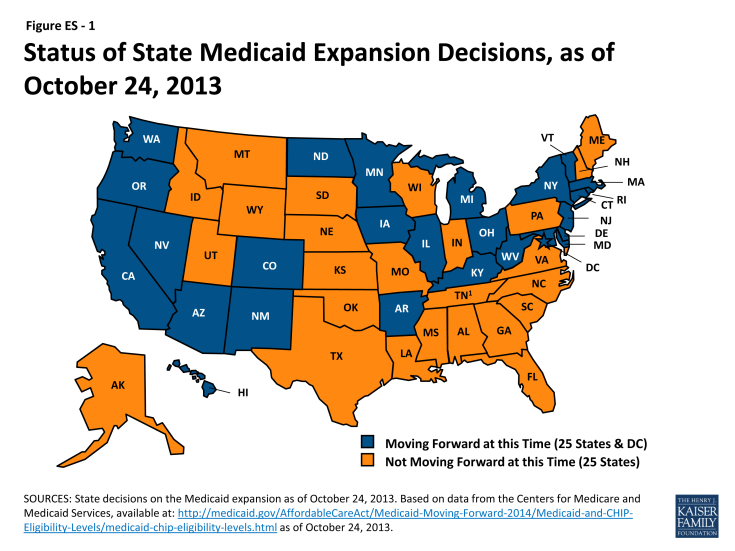 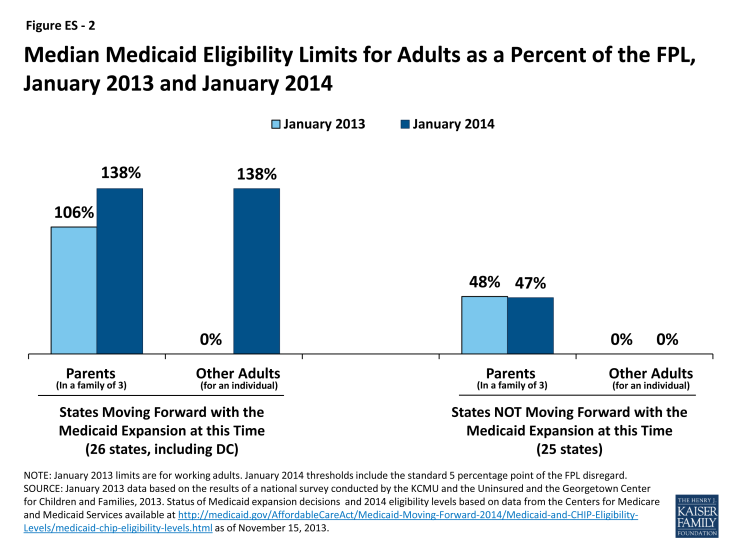 Figure ES – 2: Median Medicaid Eligibility Limits for Adults as a Percent of the FPL, January 2013 and January 2014 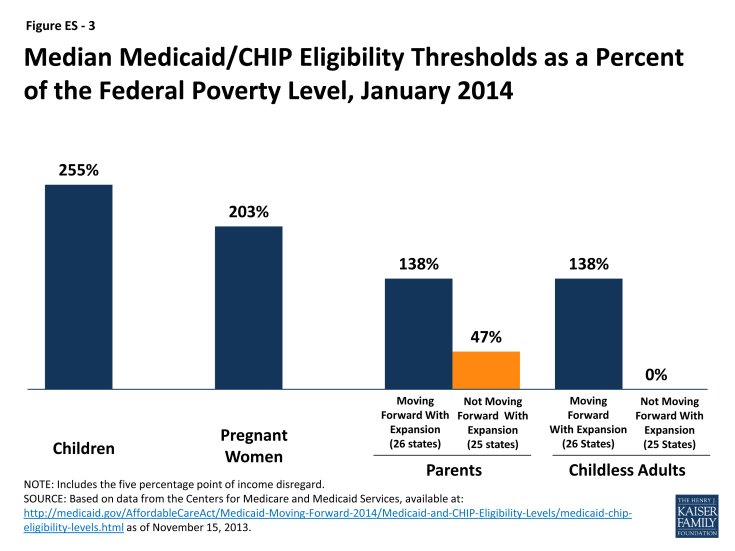 The ACA envisions seamless and timely access to the continuum of health coverage options regardless of where or how someone applies. To achieve these objectives, the ACA establishes new expectations for simplifying the application process, coordinating enrollment, and moving toward paperless verification of eligibility. These include state adoption of a single streamlined application that screens for all health coverage options, electronic transfers of accounts between agencies to facilitate transitions across health coverage programs, and reliance on trusted sources of electronic data rather than requesting paper documentation to verify eligibility criteria.

As of October 1, 2013, 43 of 50 reporting states have deployed a single, streamlined application through their Medicaid agency. The seven remaining reporting states are in the process of developing their single, streamlined application, and nearly all anticipate having it in place by January 2014. In the interim, these states are utilizing their existing Medicaid applications and individuals who may be eligible for premium tax credits are being directed to apply through the federal Marketplace. Among the 43 Medicaid agencies that have a single streamlined application as of October 1, 2013, all had a paper version available while 36 had an online version. Looking ahead, states will continue work to make the application available through multiple modes, including online, phone, in-person, or mail. Moreover, in 32 states, further revisions will be made to their single streamlined application to meet the ACA standards, for example, by removing questions that are not relevant to eligibility.

The ability to electronically transfer individual accounts between state Medicaid/CHIP agencies and Marketplaces to coordinate enrollment is in various stages of development. Among the 17 states with State-based Marketplaces (SBMs), all but two (2) have an integrated or linked technology system that determines eligibility for all insurance affordability options and facilitates the next steps for enrollment. However, in states using the Federally-Facilitated Marketplace (FFM), electronic transfers of individual accounts between the FFM and Medicaid/CHIP agencies are essential for coordinating enrollment. Due to ongoing technological challenges with the FFM, these transfers have been delayed and alternative strategies have been put into place. For example, until the FFM can begin transferring electronic accounts to state Medicaid and CHIP agencies, it is sending batches of basic data on individuals the FFM has determined or assessed as potentially eligible for Medicaid/CHIP. Similarly, if a state Medicaid/CHIP agency is unable to transfer an account to the FFM, it can direct individuals to apply directly through the FFM. Moving forward, implementing electronic account transfers will be key to minimizing burdens on consumers and ensuring they are successfully enrolled in the coverage for which they are eligible regardless of where they apply, providing “no wrong door” access to coverage envisioned by the ACA.

States are submitting verification plans to CMS that outline the electronic data sources and procedures they will use to verify eligibility criteria. As of November 15, 2013, 35 verification plans have been approved by CMS and made publicly available. States continue to have the option to accept self-attestation without additional verification for non-financial eligibility criteria except for Social Security Numbers, citizenship, and immigration status, which states are required to verify under law. The majority of reporting states will rely on self-attestation of state residency (28 of 35), and household composition (33 of 35), while fewer will do so for age and date of birth (13 of 35). The remaining states will either verify these criteria to determine eligibility or post-enrollment. For income, states must verify financial information from an electronic data source; however, this can be done post-enrollment after the state determines eligibility based on the individual’s attestation. All 35 reporting states will verify income through electronic sources, with 30 states doing so to determine eligibility and five (5) states verifying income post-enrollment. In addition, 23 states will conduct routine ongoing post-enrollment checks of financial information, although consumers also are required to report changes that may affect eligibility.

CMS has offered states five strategies to facilitate processing applications for large numbers of people who become newly eligible for Medicaid on January 1 and the transition to new enrollment processes. All of the approaches are intended to promote enrollment and retention, while minimizing administrative burdens for states. They include early adoption of MAGI-based eligibility standards, extending renewal periods for existing enrollees, enrolling eligible Supplemental Nutrition Assistance Program participants in Medicaid based on available data, enrolling parents in Medicaid based on their children’s eligibility information, and providing 12-month continuous eligibility for parents and other adults. A state may adopt any of these facilitated enrollment approaches regardless of whether it plans to implement the Medicaid expansion. Nearly half (25) of states have taken up the option to extend renewals, 15 have adopted MAGI early, five (5) are enrolling individuals based on SNAP data, and three (3) are using eligibility data for children to enroll their parents (Figure ES- 4). Overall, 30 states have adopted at least one of the strategies, and 11 have adopted two or more of these approaches. Three (3) states (NJ, OR, and WV) have adopted four of the five. 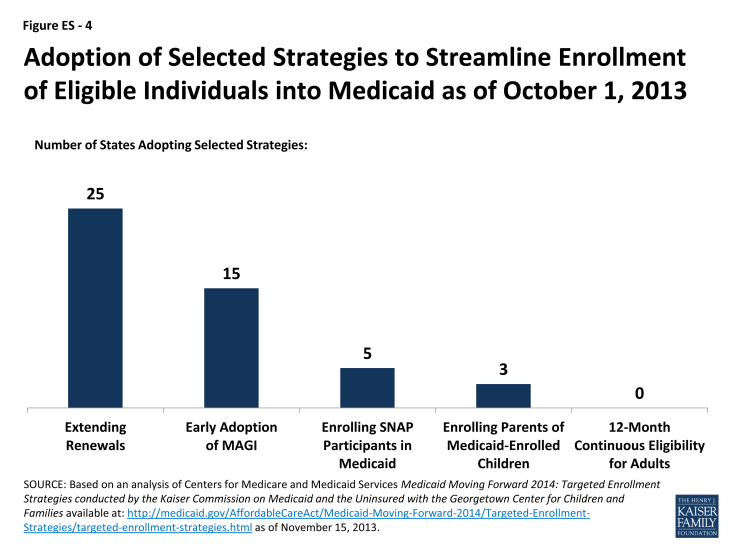 Figure ES – 4: Adoption of Selected Strategies to Streamline Enrollment of Eligible Individuals into Medicaid as of October 1, 2013

Looking ahead to 2014, coverage for parents and other adults will significantly improve in the 26 states implementing the Medicaid expansion and eligibility levels for children and pregnant women will remain strong across states. As such, as the ACA is fully implemented, Medicaid offers the potential to significantly reduce the number of uninsured. Outreach and enrollment efforts will be key for increasing coverage and it will be important for these efforts to be ongoing throughout the year since Medicaid enrollment is not limited to the Marketplace’s open enrollment period. In contrast to gains in states expanding Medicaid, large coverage gaps will remain in the states that do not expand, leaving millions of poor uninsured adults without access to a new coverage option.

To date, states have made meaningful progress in implementing key provisions of the ACA to provide streamlined Medicaid eligibility and enrollment processes, but readiness varies considerably. Moreover, the technology problems that have hampered the launch of open enrollment through the new Marketplaces, particularly the federal Marketplace (HealthCare.gov), have led to delays in coordination across Medicaid, CHIP, and Marketplace coverage. However, even with these early implementation challenges, some states have been successfully enrolling people in Medicaid and several have gotten a significant jump-start through the facilitated enrollment strategies offered by CMS. In the coming months, work will continue to deploy new processes and systems to move toward the ACA’s vision of a simplified, consumer-friendly experience. As such, January 2014 will represent the first step toward a modernized, streamlined system to connect individuals to expanded coverage options as established through the ACA, but fully achieving that vision will require time, persistence, and a commitment to continual program improvement.