This was published as a Wall Street Journal Think Tank column on July 16, 2015. 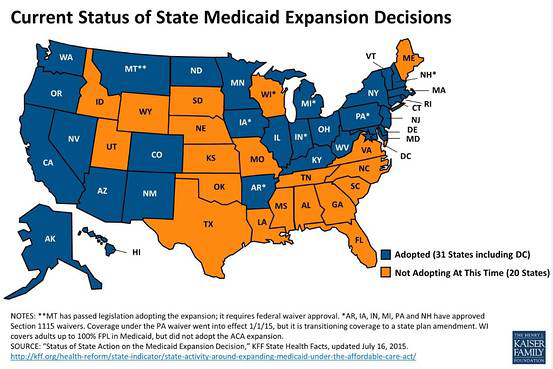 Gov. Bill Walker, a Republican turned independent, wrote to the state’s Legislative Budget and Audit Committee on Thursday that he intends to act on his own to expand Medicaid unless Alaska’s legislature approves expansion plans within 45 days. This would bring to four the number of states where governors have moved to expand Medicaid without full legislative approval. The Democratic governors of Kentucky and West Virginia acted unilaterally, and Ohio’s Republican governor, John Kasich, expanded Medicaid with approval from a state board. As the chart above shows, 30 states and the District of Columbia have expanded Medicaid under the Affordable Care Act. (Of historical note: About the same number of states had joined Medicaid a year and half after the program was first created.)

Approximately 25,000 people stand to be covered by Medicaid expansion in Alaska, a 22% increase over enrollment otherwise. Gov. Walker and advocates of expansion are betting that a future governor will not be able to reverse the decision and take coverage away from so many Alaskans. And by giving the legislature 45 days to act, Gov. Walker is taking the risk that his offer to work with the legislature during this period will not create an opportunity for the opposition to undermine his plans.

One thing is clear whether you are for Medicaid expansion or oppose it: Gov. Walker has exercised the kind of executive decisiveness for which governors can be known; it’s one reason that people often say governors make the best presidents. A lesson for Medicaid expansion in red states may be that a governor’s leadership is an essential precondition for action.