The Opioid Epidemic and Medicaid's Role in Facilitating Access to Treatment

As the opioid epidemic continues to devastate many parts of the country, Medicaid plays an important role in efforts to address the crisis. In 2017, nearly two million nonelderly adults had opioid use disorder (OUD)1,2 and there were 47,600 opioid overdose deaths in the United States, more than double the number in 2007. Medicaid has historically filled critical gaps in responding to public health crises, such as the AIDS epidemic in the 1980s and the Flint water crisis. As with these other public health crises, Medicaid provides health coverage and access to necessary health care for those struggling with OUD. Additionally, as of May 2019, 36 states and Washington, D.C. have adopted Medicaid expansion, with enhanced federal funding, to cover adults with income up to 138% of the federal poverty level ($17,236 for an individual in 2019). All Medicaid expansion benefit packages must include behavioral health services, including mental health and substance use disorder services.

Based on data from the 2017 National Survey on Drug Use and Health, this brief describes nonelderly adults with OUD, including their demographic characteristics and insurance status, and compares utilization of treatment services among those with Medicaid to those with other types of coverage. It also describes Medicaid financing for opioid treatment and the ways in which Medicaid promotes access to treatment for enrollees with OUD.

Characteristics of Nonelderly Adults with Opioid Use Disorder

Individuals with OUD were predominantly white, male, and young adults. In 2017, more than three in four (77%) of the nearly two million nonelderly adults with OUD were non-Hispanic, White (Figure 1). Those with OUD were also more likely to be male (60%), although the epidemic has reached an increasingly large share of women in recent years, including many pregnant women.3 Additionally, half were between the ages of 18 and 34. 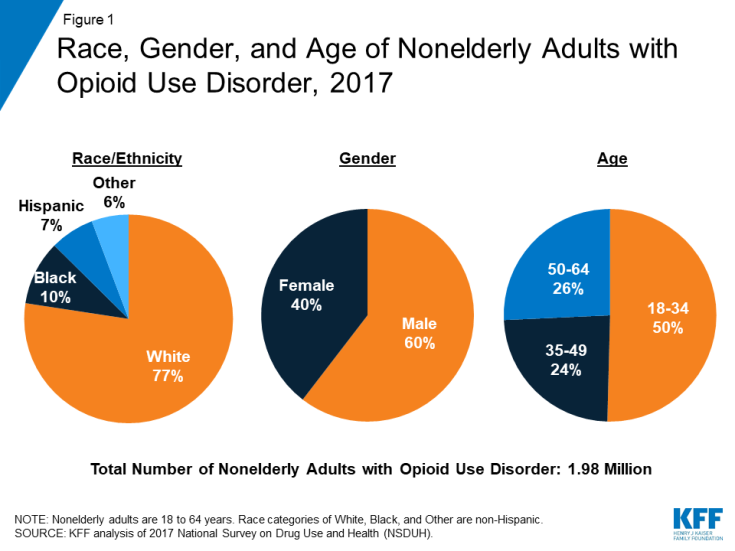 Figure 1: Race, Gender, and Age of Nonelderly Adults with Opioid Use Disorder, 2017 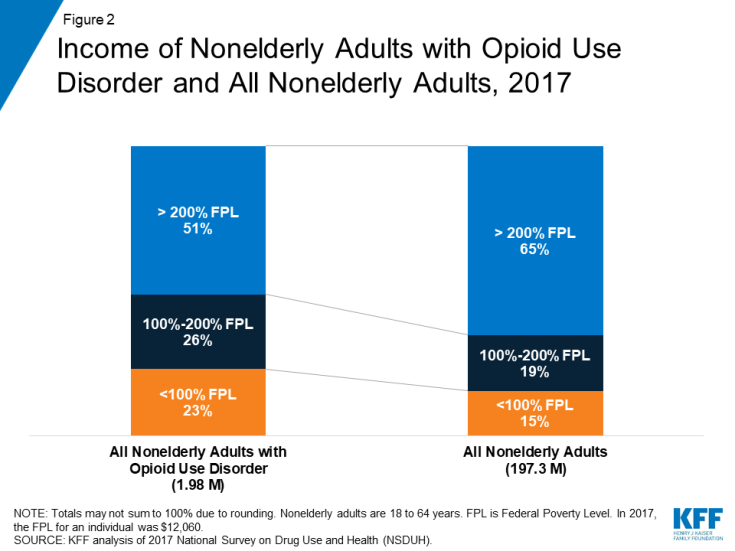 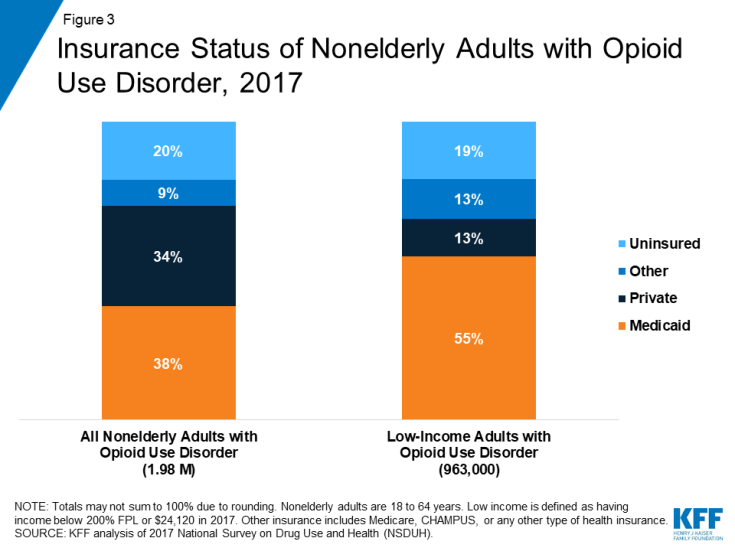 Figure 3: Insurance Status of Nonelderly Adults with Opioid Use Disorder, 2017

Utilization of Treatment Services Among Nonelderly Adults with Opioid Use Disorder 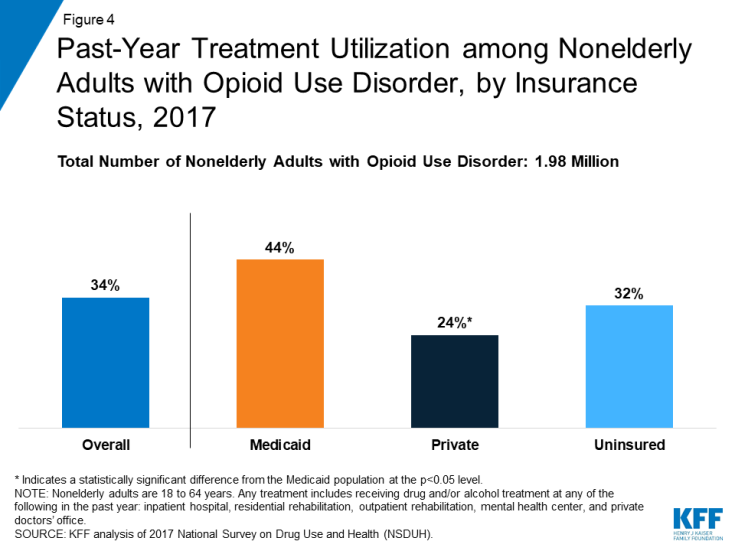 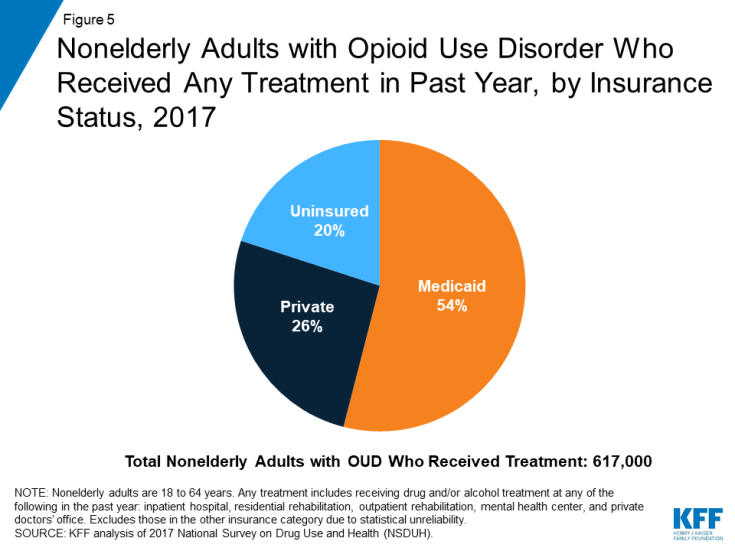 Figure 5: Nonelderly Adults with Opioid Use Disorder Who Received Any Treatment in Past Year, by Insurance Status, 2017

Many states have also applied for other Medicaid Section 1115 behavioral health waivers focused on treating individuals with substance use disorders, including OUD. CMS has approved Section 1115 waivers to expand community-based benefits, which enable states to provide additional services to individuals with behavioral health needs, including supportive housing, supported employment (such as job coaching), and peer recovery coaching. Additionally, CMS has approved waivers that allow states to expand Medicaid eligibility to cover additional populations with behavioral health needs and to implement certain delivery system reforms, such as physical and behavioral health integration and alternative payment models.16 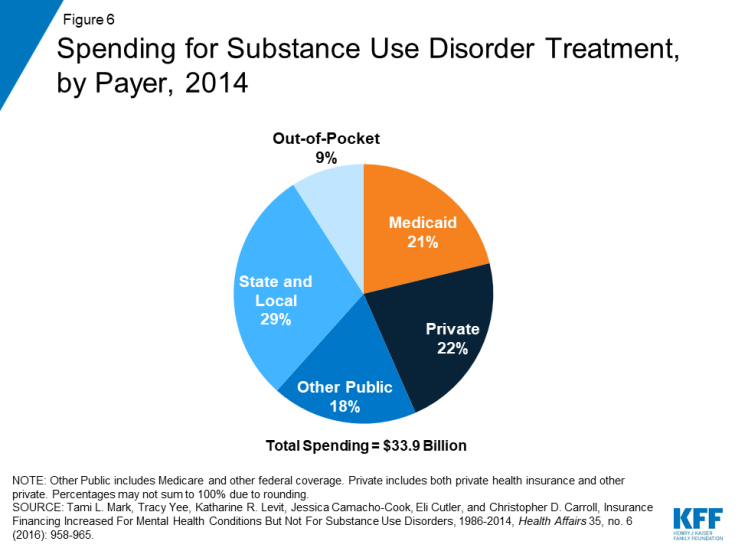 Figure 6: Spending for Substance Use Disorder Treatment, by Payer, 2014

As the opioid epidemic continues to ravage many parts of the country, particularly as fentanyl has become more pervasive,19 states are increasingly looking to Medicaid to expand coverage and treatment options to stem the crisis. In addition to covering MAT medications and therapy and numerous other treatment services, states are seeking waivers to allow payment for opioid treatment services provided in IMDs, to expand coverage of community-based benefits to support treatment and recovery, and to better integrate behavioral health services, including substance use disorder services with physical health services.

States that have not yet adopted the ACA’s Medicaid expansion can improve access to treatment by expanding Medicaid, which would enable them to cover many people with OUD who are currently uninsured. At the same time, using 1115 waivers to impose new requirements in Medicaid, including work requirements and premiums, could compromise efforts to address the opioid epidemic. Additional reporting requirements coupled with new premium requirements may also make it more difficult for eligible individuals to enroll in Medicaid and for those currently enrolled to keep their coverage. Utilization of treatment by adults with an OUD is already low; imposing new barriers to obtaining and maintaining Medicaid could further impede those battling OUD from getting the care they need.