The COVID-19 pandemic has resulted in administrative challenges for state Medicaid agencies from staff transitions to telework due to social distancing requirements, increased applications during the economic downturn, and the need to modify policies and procedures to facilitate access to coverage and care in response to the public health crisis. As a result, states have faced increased enrollment while having fewer staff and resources available for routine eligibility and enrollment processing. At the same time, Maintenance of Eligibility (MOE) provisions require states to keep beneficiaries enrolled until the end of the month when the COVID-19 public health emergency (PHE) ends and prohibit states from adopting more stringent eligibility criteria or increasing premiums, as conditions of receiving temporary increased federal Medicaid funding under the Families First Coronavirus Response Act. Consequently, states will need to address a backlog of Medicaid eligibility renewals and redeterminations as well as continue to process new applications after the PHE ends.

In addition, many states have adopted temporary policy changes through various Medicaid emergency authorities to expand eligibility and/or streamline enrollment processes to connect individuals to coverage more quickly during the pandemic. States also have used emergency authorities to adopt other policies such as relaxing cost sharing and prior authorization requirements, increasing provider payments, and adding new benefits. States will have to decide whether to continue these policy changes after the PHE ends. If states return to pre-PHE eligibility and enrollment rules, they will need to redetermine eligibility for impacted enrollees. They also will need to notify beneficiaries and providers about any payment or benefit changes.

What actions does CMS expect states to take during the PHE?

CMS expects states to process applications, redeterminations and renewals to the extent possible during the PHE, even though they cannot terminate coverage for most enrollees due to the MOE. CMS emphasizes prioritizing actions to ensure that individuals can enroll in and retain coverage, such as determining eligibility for new applications, during the PHE.1 Table 1 summarizes the circumstances that may result in state backlogs and the actions that CMS expects states to take during the PHE to address pending eligibility and enrollment actions. CMS also encourages states to conduct CHIP and Basic Health Plan (BHP) redeterminations and renewals during the PHE. Because the MOE does not apply to those programs, CMS notes that states can process CHIP and BHP actions now, which could allow them more time to focus on clearing Medicaid backlogs after the PHE and MOE conditions end.

To help ensure that future workloads are manageable, states can take action to evenly distribute renewals throughout the year. When completing renewals that were delayed during the PHE on an ex parte basis (using information available to the state and not requiring information from the individual), states have the option to retain the individual’s original eligibility period (effective when the renewal was due) instead of beginning a new eligibility period on the date the renewal actually is completed. This may help states distribute workloads in future years by staggering renewal dates but may also result in renewal periods for enrollees that are shorter than 12 months.

How quickly does CMS expect states to clear eligibility and enrollment backlogs after the PHE ends?

CMS expects states to complete all pending eligibility and enrollment actions and clear any backlogs within six months after the PHE ends. The guidance sets timelines for states to return to normal operations for eligibility determinations on new applications as well as eligibility verifications, redeterminations based on changes in circumstances, and renewals that are pending when the PHE ends (Figure 1). Initial milestones focus on processing applications, followed by completing pending verifications, redeterminations, and renewals. 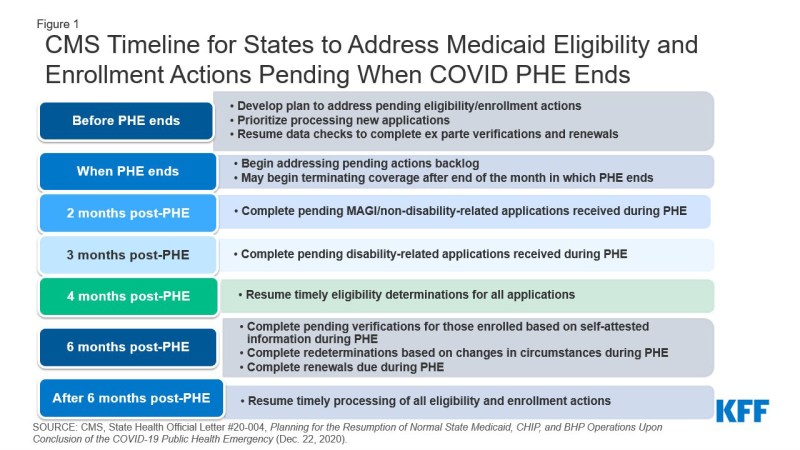 States need to adopt a methodology for prioritizing which pending eligibility and enrollment actions to complete first, focused on individuals “most likely” to no longer be eligible (Table 2).2 States have discretion about whether to adopt one of CMS’s methodologies or to develop their own approach. The state’s methodology will be part of the operational plan that it must develop to set out how it will process pending actions within CMS-required timeframes after the PHE ends. CMS will not approve state operational plans but may request them from states that are not meeting the required timeframes. States must submit baseline data about pending eligibility and enrollment actions at the end of the PHE and submit updates quarterly thereafter to show progress toward the timeframes. If states meet these timeframes, CMS will not consider eligibility and enrollment actions delayed due to the PHE as untimely for Program Error Rate Measurement (PERM) purposes.3

The guidance reiterates existing policies states can adopt to streamline eligibility and enrollment processes and reduce administrative workload. For MAGI populations (whose eligibility is based solely on low income), these options include renewing coverage for 12 months when processing changes in circumstances and a data check shows continued eligibility, relying on income determinations made by SNAP or TANF, as well as Express Lane Eligibility and 12-month continuous enrollment for children. States can also streamline eligibility and renewal processes for non-MAGI enrollees (whose eligibility is based on old age or disability) by adopting 12 month renewal periods, using prepopulated renewal forms, offering renewal reconsideration periods, and modifying verification policies to accept self-attestation, among other policies.4

After the PHE ends, what do states need to do before terminating coverage?

States cannot terminate coverage until the end of the month in which the PHE ends, due to the MOE requirements. After the MOE and any temporary emergency authorities end, states must follow regular program rules that require sending 10 day advance notice and providing the opportunity for a fair hearing prior to terminating coverage. If states are ending emergency authorities and redetermining eligibility under more restrictive pre-PHE rules, states must provide enrollees with a reasonable timeframe, at least 30 days, to provide information to establish their continued eligibility.5 States also must ensure a smooth transition to other insurance affordability programs for those who lose Medicaid eligibility but may be eligible for Marketplace or other coverage.

After the PHE and MOE requirements end, states do not have to repeat redeterminations or renewals before terminating coverage for individuals who have been determined ineligible within six months of the date the state sends an advance notice of coverage termination. To adopt this option, states must inform the enrollee at the time of the ineligibility determination that coverage will end after the month in which PHE ends, and the state will redetermine their eligibility based on any changes in circumstances that they report prior to termination. The state then must send a second notice in advance of the termination date. In cases where the state requests information to establish continued eligibility, states must allow individuals to respond through the end of the PHE, regardless of when the request was sent. If an individual has not responded to a request that was sent within six months of the date on which the state intends to terminate coverage after the PHE ends, the state may send advance notice of termination without attempting a repeated verification or redetermination.

What do states need to do if they want to continue or end policies adopted through emergency authorities?

The various Medicaid emergency authorities adopted during the PHE will end automatically (when the PHE ends or on a specified end date), unless a state takes action to extend them. States are not subject to public notice requirements for returning to pre-PHE rules. However, CMS strongly encourages states to communicate about changes with providers, enrollees, and managed care plans. And, states must provide advance notice to enrollees of any actions that result in a loss of eligibility, a reduction in benefits, or an increase in cost-sharing; this includes changes due to ending an emergency authority that temporarily expanded eligibility or benefits. Although some states already have sent notices during the PHE informing enrollees of changes that will take effect after the PHE or MOE ends (such as increased cost-sharing), states must send a second advance notice at the end of the PHE prior to implementing these changes.6

CMS encourages states to consider whether some emergency authorities should end before the PHE ends. For example, many states paused Preadmission Screening and Resident Review (PASRR) assessments, which prevent unnecessary nursing facility stays and facilitate community transitions, for people with intellectual or developmental disabilities or mental illness entering nursing homes during the pandemic. Given PASRR’s role in preventing unnecessary institutionalization, CMS encourages states to re-start PASRR before the PHE ends.7

States may want to continue some policies adopted under emergency authorities after the PHE ends, though not all policies can be continued. For example, states can amend their state plans or HCBS waivers to continue service delivery via telehealth. States also can update their verification plans to continue streamlined eligibility and enrollment options. CMS specifically encourages states to identify any temporary authorities that increased access to HCBS and make these changes permanent. However, states that used Section 1135 waiver authority to relax provider screening requirements and/or temporarily enroll providers who participate in other state Medicaid programs or Medicare must return to regular program rules. States have six months from the end of the PHE to complete screenings of these provisional providers and to stop payments to any providers not fully enrolled.

CMS is also now allowing states to extend HCBS waiver emergency authorities adopted under Appendix K up to six months after the PHE ends. Appendix K allows states to make temporary changes to HCBS waivers in response to emergencies, such as modifying or expanding eligibility or benefits, modifying or suspending service planning and delivery requirements, and adopting policies to support providers. Appendix K approvals to date were scheduled to expire after one year, with the first expirations to occur in late January 2021. Given the pandemic’s longevity and uncertainty about how long the PHE ultimately will last, CMS is now allowing states to submit requests to extend existing Appendix K approvals up to six months after the PHE ends and will apply this end date to new Appendix K requests going forward.8 After six months post-PHE, states can continue many Appendix K policies by amending their HCBS waivers.9