How has the ACA Medicaid Expansion Affected Providers Serving the Homeless Population: Analysis of Coverage, Revenues, and Costs

The Affordable Care Act (ACA) Medicaid expansion to adults closed a longstanding gap in eligibility in the 32 states, including DC, that have adopted it to date, providing a new coverage option for millions of uninsured adults. In Medicaid expansion states, many people experiencing homelessness are newly eligible for coverage since this population includes many single adults who were excluded from Medicaid prior to the expansion. Coverage is particularly important for this population given that they have poor health and intensive health care and social service needs. To further understand how the first full year of Medicaid expansion has affected patients who are homeless and the providers who care for them, this analysis uses data from the Uniform Data System (UDS) for health centers1 to examine changes in insurance coverage, revenues, and costs among Health Care for the Homeless (HCH) projects serving the homeless population. Key findings include the following: 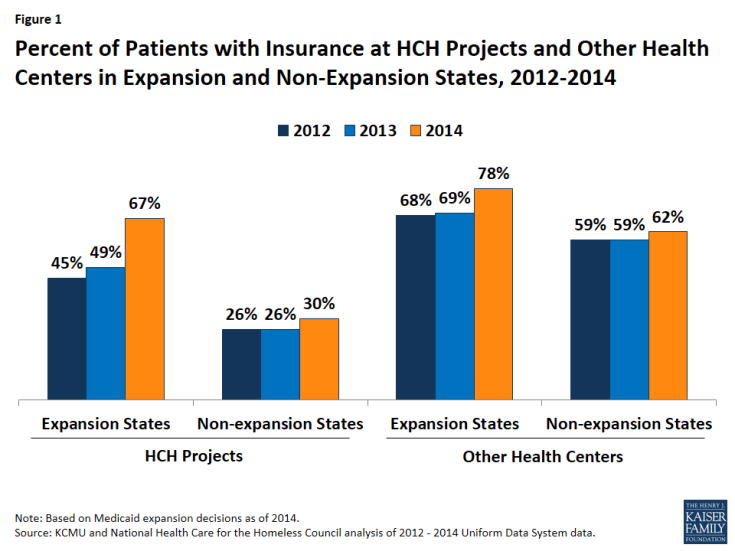 Figure 1: Percent of Patients with Insurance at HCH Projects and Other Health Centers in Expansion and Non-Expansion States, 2012-2014 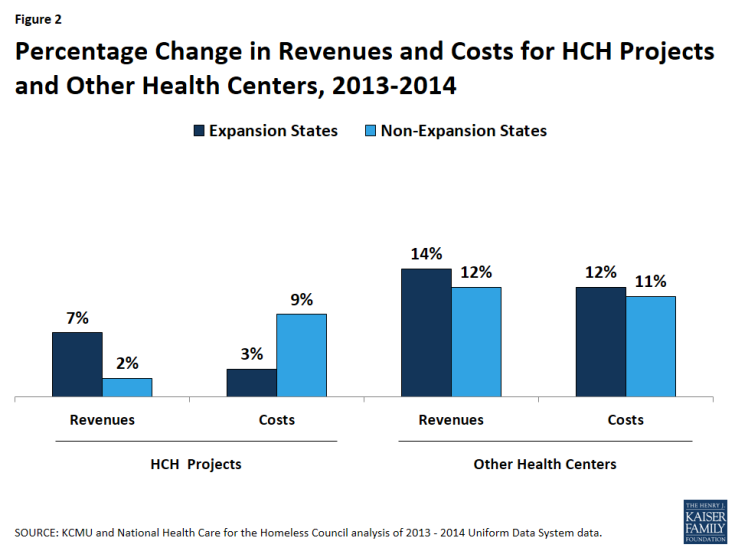 Figure 2: Percentage Change in Revenues and Costs for HCH Projects and Other Health Centers, 2013-2014 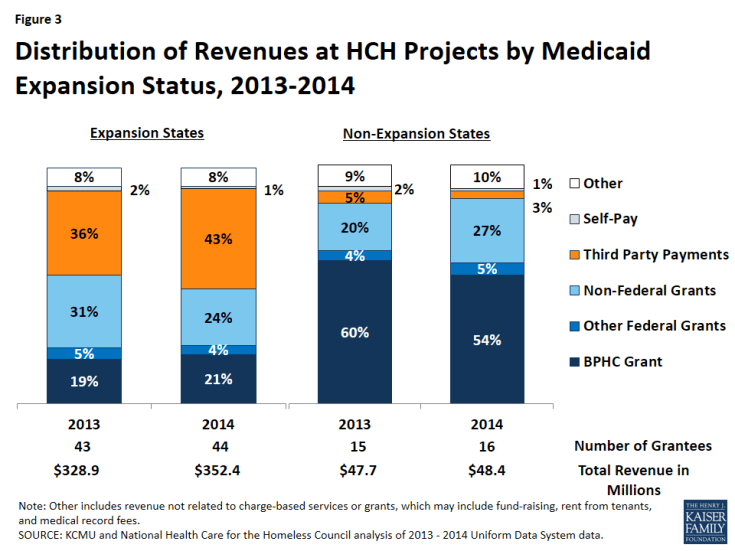 The distribution of costs remained fairly stable among HCH projects in both expansion and non-expansion states. Among HCH projects in expansion and non-expansion states, medical care (medical care personnel, laboratory and x-ray, and other direct medical costs) accounted for about half of costs, clinical care (dental, mental health, substance abuse, pharmacy, vision and other services) made up about 30% of costs, and the remainder of costs were for enabling services (case management, outreach, transportation, translation and interpretation, education, eligibility assistance and other support).

In sum, HCH projects in expansion states have had larger coverage gains among patients as well as greater revenue gains and smaller increases in costs compared to those in non-expansion states, with third-party payments increasing as a share of revenue due to coverage gains among patients. Together, the coverage gains and revenue increases may facilitate broader access to services among patients and greater stability for HCH projects in expansion states. Gains in third-party revenue may also support strategic and operational improvements. Yet even with gains in third-party revenue, grant funding still remains important, particularly for services such as case management and outreach that are not reimbursed by Medicaid. HCH projects may also face new administrative challenges associated with serving an increasing share of patients with coverage. In contrast, HCH projects in non-expansion states continue to serve a largely uninsured population, experienced increased costs but little increase in revenue, and rely almost exclusively on grant funding.