New preliminary data from the Medicaid Budget and Expenditure System (MBES) released by the Centers for Medicare and Medicaid Services (CMS) details for the first time the number of adults enrolled in Medicaid under the new Affordable Care Act (ACA) Medicaid expansion category. The data show that as of March 2014, among 48 states reporting data, 4.8 million adults out of the total 54.1 million individuals enrolled in Medicaid were in the ACA Medicaid expansion category (referred to as the VIII Group based on the section of legislation that added the expansion eligibility category). Missing from this preliminary data report are DC, North Dakota and California, which due to its size accounts for a large share of Medicaid enrollees. The 4.8 million expansion adults includes 3.2 million adults that qualify for 100% federal match funding as individuals made newly eligible under the ACA and 1.5 million adults who fall into the adult expansion category but do not qualify for the full 100% federal match funding, but qualify for other enhanced match rates made available under the law.

These data were released as part of state quarterly expenditure reports that are submitted to CMS through the MBES to claim federal matching funds, which began including enrollment data starting with the January through March 2014 quarter. These data provide another element of Medicaid enrollment that differs from other enrollment data released from CMS as part of its Medicaid and CHIP Performance Indicator Project, which provide point-in-time Medicaid and CHIP enrollment data to support program management and oversight. These two data sets are not comparable; they have different purposes and include different populations. This issue brief provides an overview of the new data as well as how it differs from the Performance Indicator data. Appendix Table 1 provides state by state enrollment data for March 2014.

Where Do these Data Come From?

States submit quarterly expenditure reports to CMS through the MBES to claim federal Medicaid reimbursement for covered services provided to Medicaid enrollees. States submit these reports to CMS using a CMS-64 form following the end of each quarter (usually within 30 days of the close of the quarter). When states submit the expenditure reports, they certify the data are accurate and CMS conducts a limited review to assess whether the data are reasonable. Historically, these expenditure data have not included any information on enrollment or spending by eligibility group. However, to enable states to claim the enhanced funding available for adults made newly eligible by the ACA, CMS revised the CMS-64 form to require states to report claims separately by eligibility group, including separate reporting of claims for newly eligible adults. In addition, for the first time, the CMS-64 form includes enrollment data by eligibility group. Since this data claiming and reporting process is new, ensuring that the data are comparable and accurate across states may take time.1 To date CMS has only released enrollment data and not spending data from the MBES.

What does the MBES enrollment data show?

During March 2014, nearly 4.8 million adults were covered through the ACA Medicaid expansion category, which includes non-disabled, non-elderly adults with incomes up to 138% FPL ($16,105 for an individual in 2014). This total includes data for 22 of the 25 states that had adopted the Medicaid expansion at that time; data were not available for California, the District of Columbia, and North Dakota. (Since March 2014, four additional states—MI, NH, PA, and IN—have adopted the Medicaid expansion.2) The 4.8 million expansion adult enrollees accounted for 9% of the total 54.1 million individuals enrolled in Medicaid during March 2014 among the 48 reporting states (Figure 1), and 18% of the 26.7 million total Medicaid enrollees in the 22 states that had adopted the expansion and reported data. However, expansion adults as a share of total Medicaid enrollment varied significantly across states from 5% in Ohio to 50% in Oregon. 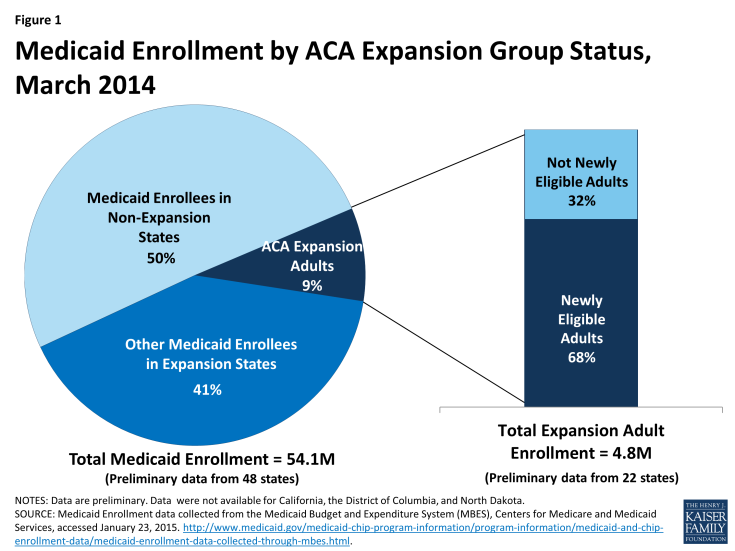 “Expansion” States Matching Rate. The “expansion” or “transition” matching rate is designed to provide some additional federal funding to “expansion” states that had already expanded coverage to parents and childless adults up to at least 100% FPL statewide as of March 23, 2010, when the ACA was enacted. In recognition of these states already provided coverage at these higher Medicaid eligibility levels, these states can receive a phased-in increase in their federal matching rate for adults without dependent children under age 65 beginning on January 1, 2014 so that by 2019 it will equal the enhanced matching rate available for newly-eligible adults. In addition, expansion states that do not have any newly-eligible Medicaid beneficiaries because they already covered people up to 138% FPL or higher (e.g. Massachusetts) also receive a temporary (January 1, 2014 through December 31, 2015) 2.2 percentage point increase in their federal matching rate for all populations.

Technical Adjustments Related to Who Qualifies for 100% Federal Funding for Newly Eligible Adults. Whether an individual qualifies for the 100% newly eligible federal match rate is based on a comparison of the individual’s income to the income standard in effect in the state on December 1, 2009, converted to an equivalent MAGI-based income standard. Individuals with incomes at or below the converted MAGI-based income standard will not be considered newly eligible and individuals with incomes above the converted standard are newly eligible and eligible for the enhanced match rate. As part of the conversion to MAGI, states may make adjustments to account for individuals who would not have been eligible because of asset test requirements in place on December 1, 2009, enrollment caps that may have been in effect for waiver populations receiving full benefits as of December 1, 2009, and other special circumstances. These adjustments may result in some adults being enrolled in the expansion category who do not qualify for the 100% federal match for newly eligible adults.

Reflecting variation in eligibility levels prior to the ACA, the share of expansion adults that qualified for the 100% federal match for newly eligible adults differs across states. For example, states like New York, Massachusetts, Delaware, and Vermont, which had previously provided full Medicaid coverage to parents and other adults up to at least 100% FPL, have higher shares of expansion adults who do not qualify for the 100% federal match for newly eligible adults. Instead, these adults qualify for the “expansion” or “transition” rates, given to states in recognition of their earlier expansions to adults at higher income levels, which will phase-in increases so that by 2019 it will equal the enhanced matching rate available for newly-eligible adults. In contrast, in states like Kentucky or Nevada, which had not previously covered childless adults and had low eligibility limits for parents, all adults in the expansion category qualify for the 100% federal match for newly eligible adults (Figure 2). 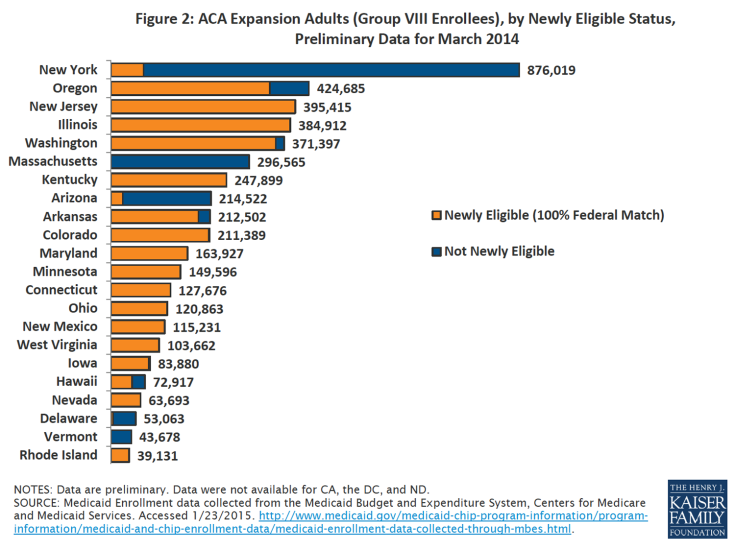 Enrollment of adults in the expansion group is concentrated in a small number of states. Half of the total 4.8 million adults enrolled in the expansion group during March 2014 resided in five states (New York, Oregon, New Jersey, Illinois and Washington State.) (Figure 3) However this distribution varied for the 3.2 million expansion adults who qualify for the 100% federal match for newly eligible adults. Over half resided in New Jersey, Illinois, Washington State, Oregon and Kentucky (Figure 3). If data from California were available, these shares would likely change. 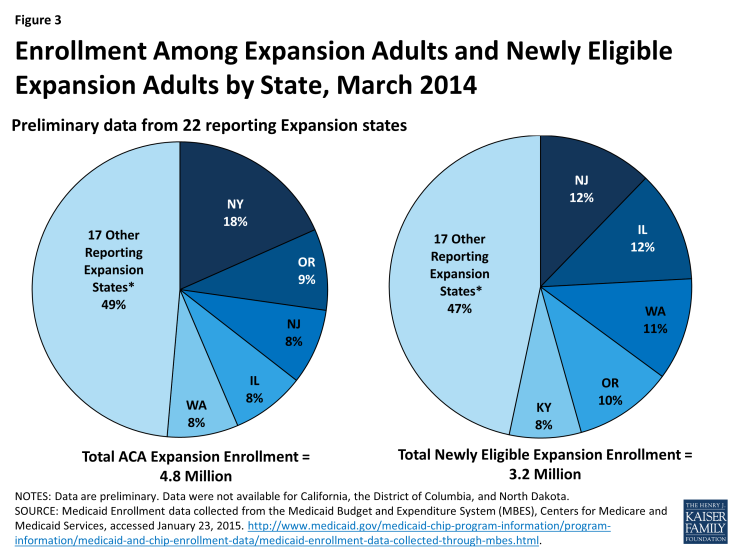 What Are the Limitations of these Data?

While these data provide new information that shed light on the number of adults covered through the ACA Medicaid expansion, there are some key limitations to recognize:

How does this compare to other data sources?

Since December 2013, CMS has been providing another source of monthly enrollment data for Medicaid and CHIP as part of its Medicaid and CHIP Performance Indicator Project. There are important differences between the Performance Indicator and MBES enrollment data that limit the ability to make comparisons between the two datasets, as discussed below and highlighted in Table 1:

This new MBES enrollment data provide further insight into the early effects of the Medicaid expansion on Medicaid enrollment. However, the data are preliminary and this is the first time enrollment data have been collected as part of the claiming process. It differs from other enrollment data collected as part of the CMS Performance Indicator project in many ways, limiting the ability to make comparisons between the datasets. Data collection through the forthcoming T-MSIS system (which will use the same definition as the CMS-64 claims process) will undergo a more thorough quality review and is intended to serve as the authoritative source of Medicaid enrollment data moving forward. This brief will be updated as more data become available.