Prompted by an interest in improving the health of the population, enhancing the experience and outcome of the patient, and reducing the per capita cost of care, states are implementing innovative programs reforming how care is delivered and paid for.  Some delivery system initiatives have been long-standing, such as efforts to expand and improve quality and value in managed care contracts.  Others initiatives such as health homes for individuals with chronic conditions and new programs to test delivery and payment models to better serve individuals dually eligible for Medicaid and Medicare were new options included in the Affordable Care Act (ACA).  In addition, half of the states are involved in the State Innovation Models initiative (SIM) working with the CMS Innovation Center.  Finally, CMS together with the National Governor’s Association (NGA) recently announced a new initiative called the Medicaid Innovation Accelerator Program that will invest over $100 million over five years to help states accelerate the development and testing of new state-led payment and service delivery innovations.

“Delivery System Reform Incentive Payment” or DSRIP programs are another piece of the dynamic and evolving Medicaid delivery system reform landscape.  DSRIP initiatives are part of broader Section 1115 Waiver programs and provide states with significant funding that can be used to support hospitals and other providers in changing how they provide care to Medicaid beneficiaries.  Originally, DSRIP initiatives were more narrowly focused on funding for safety net hospitals and often grew out of negotiations between states and HHS over the appropriate way to finance hospital care.  Now, however, they increasingly are being used to promote a far more sweeping set of payment and delivery system reforms.  The first DSRIP initiatives were approved and implemented in California, Texas, and Massachusetts in 2010 and 2011, followed by New Jersey, Kansas and Massachusetts in 2012, and most recently New York which was approved in 2014 and will be implemented in 2015.  Key components of DSRIP waivers include the following:

Under DSRIP initiatives, funds to providers are tied to meeting performance metrics.  To obtain DSRIP funds, eligible entities (hospitals, and other providers, including provider coalitions) must meet certain milestones or metrics.  While the exact structure and requirements of each DSRIP initiative differ, there is a focus on meeting process type metrics in the early years of the waiver, such as system redesign or infrastructure development, and then meeting more outcome based metrics in later years, such as clinical health or population based improvements.  In support of these milestones and metrics, the DSRIP waivers impose robust data collection and reporting requirements on providers. Most recently, in the approval of the New York DSRIP plan, state DSRIP funds are also tied to meeting performance metrics beginning in year 3 of the waiver. 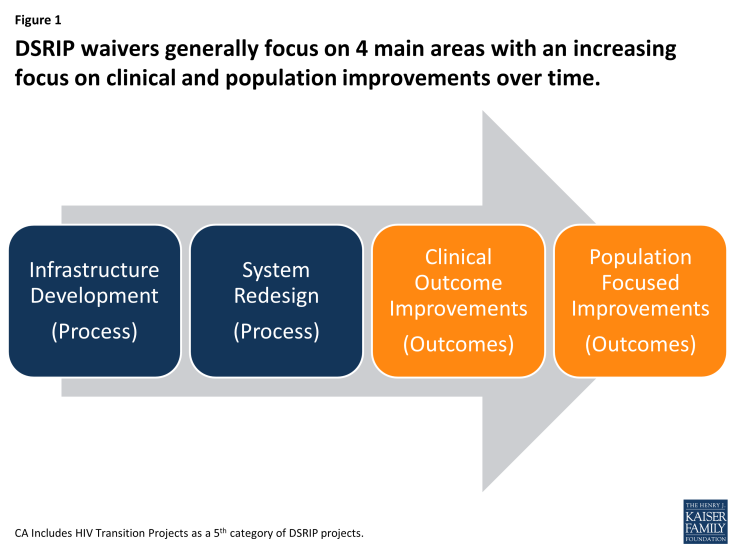 Figure 1: DSRIP waivers generally focus on 4 main areas with an increasing focus on clinical and population improvements over time

Funding for DSRIP initiatives varies across states, but can be significant.  However, DSRIP funding is part of broader Section 1115 waiver programs that are required to be budget neutral for federal spending.  California, New York, and Texas each expect to have several billion dollars for their DSRIP initiatives over a five-year period while Kansas, Massachusetts and New Jersey have smaller programs and will spend substantially less.  The DSRIP pool is a component of larger Medicaid 1115 waivers, which must be “budget neutral” to the federal government, meaning the federal government cannot spend more under the waiver than estimated spending without the waiver.  Generally, there is a lot of negotiation between states and the federal government over policy and budget neutrality for Section 1115 waivers.  In concept, states will undertake initiatives expected to save Medicaid funds and then use expected savings for new investments in delivery system reform.  States have also used DSRIP waivers as a means to continue receiving Medicaid funds for supplemental payments to hospitals as they expand their use of managed care.

The role of DSRIP waivers in delivery system reform is evolving. Recent DSRIP approvals highlight the evolution of DSRIP waivers, which increasingly include more accountability and involve a broader set of providers.  For example, the New York DSRIP waiver approved at the end of 2013 includes funding for a broad set of providers, a more specific set of metrics and projects, and new requirements for the state to meet statewide goals as a condition of continuing to receive DSRIP funding (in addition to requirements for providers to meet specific metrics to access funding).  Looking ahead, it will be important to evaluate the longer term outcomes of these initiatives and the extent to which they are making changes in care delivery, clinical outcomes, and population health.  If they are successful, policymakers may want to see how these programs can be scaled and replicated across a larger number of states.