The primary goal of the Affordable Care Act (ACA) is to increase access to health care by expanding health insurance coverage, but another major thrust of the law is support for innovation in health care delivery and payment aimed at improving patient care and population health and reducing health care costs. The ACA-established Center for Medicare and Medicaid Innovation (Innovation Center) within the Centers for Medicare and Medicaid Services (CMS) is testing an array of alternative payment and service delivery models through numerous demonstration and pilot programs designed to lower costs for Medicare, Medicaid, and the Children’s Health Insurance Program (CHIP) while maintaining or improving the quality of care for beneficiaries.1 This fact sheet provides an overview of one of these programs – the State Innovation Models (SIM) initiative.

The State Innovation Models (SIM) initiative provides federal grants to states, under cooperative agreements, to design and test innovative, state-based multi-payer health care delivery and payment systems. The distinctive purpose of the SIM initiative is to test whether new models with potential to improve care and lower costs in Medicare, Medicaid, and CHIP will produce better results when implemented in the context of a state-sponsored plan that involves multiple payers, broader state innovation, and larger health system transformation to improve population health.2 A premise of the SIM initiative is that states have important policy and regulatory authorities and the ability to convene a broad array of public and private stakeholders – means that can be used to leverage the development of initiatives in which multiple payers participate, potentially enhancing their effectiveness.

In 2012, the CMS Innovation Center invited states to submit SIM proposals for a first round of Model Design or Model Testing awards. Under the terms of the SIM initiative, state proposals must be sponsored and submitted by the Governor’s office.

Model Testing awards. Round One Model Testing awards were intended for states with fully developed proposals for state-wide health system transformation. They provide funding for states to implement their State Health Care Innovation Plan, a document that describes their state’s vision and model for health system transformation and the full range of levers and strategies the state intends to use to implement, test, and evaluate its model. In announcing the SIM funding opportunity, CMS stated that it would give preference to state proposals that relied on already-existing CMS approaches, such as Medicare Shared Savings Accountable Care Organizations (ACOs), Medicaid health homes, and/or bundled or episode-based payment. Model Testing proposals are evaluated based on state commitment to and rationale for system transformation, and on the proposed models’ potential to improve care and health for Medicare, Medicaid, and CHIP beneficiaries and reduce program costs. States’ Model Testing proposals were required to meet the following requirements among others:

In February 2013, the Innovation Center awarded a total of nearly $300 million in Round One SIM grants to 25 states for Model Testing, Model Pre-Testing, or Model Design (Figure 1). Six states – Arkansas, Maine, Massachusetts, Minnesota, Oregon, and Vermont — received a total of $250 million in Model Testing awards to implement and test their Innovation Plans over 42 months. CMS determined that some Model Testing applicants were not yet ready for a Model Testing grant, but awarded three of them – Colorado, New York, and Washington — a total of $4 million in Model Pre-Testing awards to refine their Innovation Plans over six months. Sixteen states received Model Design awards totaling $31 million to plan and develop Innovation Plans over six months.3 Each state that received a SIM award is expected to develop an evaluation plan that includes monitoring all populations and payers involved in the state’s initiative. In addition, the Innovation Center will conduct a national evaluation focused on Medicare, Medicaid, and CHIP enrollees that will assess each state’s model and also compare state models.4 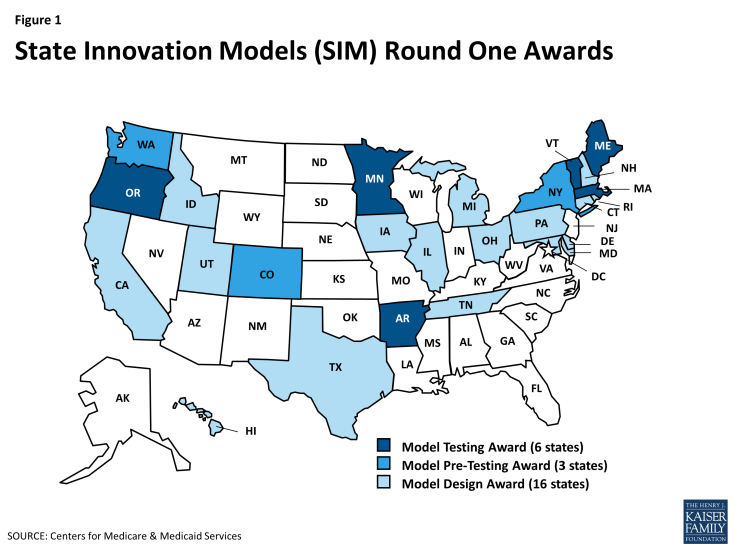 The rest of this brief focuses on key dimensions of the approaches in the six Round One Model Testing states, which are furthest along in implementing multi-payer reforms.

What approaches are the Model Testing states taking?

The States’ approaches expand the role of primary care and integrated care models. Most Model Testing states use an enhanced primary care model, such as patient-centered medical homes (PCMH), as the foundation of their delivery system transformation (Table 2).  Enhanced primary care models focus on care coordination and patient-centered care management, and involve linkages between primary care and services such as specialty care, behavioral health care, and public health and community resources (Table 3). In states with integrated delivery systems, these enhanced primary care models may be embedded in ACOs, Accountable Communities, or other arrangements in which health care providers share financial risk and responsibility for the health of a defined population. Some Model Testing states are also creating new workforce models that include team-based care and non-traditional health care workers, such as Community Health Workers or Peer Wellness Specialists who connect patients to community resources, provide wellness coaching, and are part of care teams.

Most Innovation Plans involve an emphasis on improving care for high-risk, high-cost populations. Arkansas and Maine, for example, are using Medicaid health home, or health home-type models, which coordinate care among providers for individuals with multiple chronic conditions (Table 2). Maine is also using behavioral health homes and practice-based “community care teams,” which are teams of health care workers within medical homes that manage the care of high-risk, high-cost patients, including linking them to community-based services.

All six Model Testing states are using multiple payment models (Table 4). For example, payers included in Arkansas’ and Minnesota’s SIM programs will make per-member-per-month (PMPM) payments to medical homes, health homes, or both, to coordinate care for patients. The extra payments help to finance ongoing operational expenses associated with care coordination and case management, as well as practice transformation tools, technology, and services. Payers in both states are also testing shared savings models to reward providers for quality performance and control of cost growth, as well as episode-based payment or prospective payment for certain services or health conditions.

A key purpose of the alternative payment models is to change provider financial incentives. States are using various approaches that tie provider payment to performance rather than volume. Performance-based payment models range from financial bonuses to providers who meet specified benchmarks to arrangements that place providers at financial risk based on their performance relative to quality and cost goals. For example, payers in Massachusetts are offering bonus payments to providers who demonstrate quality primary care performance. Payers in all six Model Testing states are using models in which providers share in payer savings (and sometimes losses) based on how their performance measures up against pre-set quality and cost-containment targets.

Payers in Arkansas and Vermont are using forms of bundled payment, including episode-based payments and case rates. An alternative to fee-for-service (FFS) payment, bundled payment refers to a single payment to a provider or group of providers (who may work in multiple settings) for all services involved in an episode of care or the treatment for a specific condition (e.g., a hospitalization and related follow-up care for heart surgery). The providers share financial accountability for the entire episode or treatment and thus have incentives to contain costs by improving patient care and thereby reducing avoidable hospital admissions or readmissions. Payers in Maine’s SIM initiative plan to evolve their ACO payment system to increase provider accountability over time, moving from shared savings to shared savings/risk, and eventually to partial capitation (fixed monthly payment for a defined set of services and FFS for other services) or global capitation. Under Oregon’s Innovation Plan, each payer may choose its own provider payment methodologies.

States testing payment models that involve provider financial risk usually calibrate providers’ financial exposure to their capacity to bear risk. For example, their models may call for providers in less integrated systems, who have limited leverage to manage the overall care of patients, to share in savings only, while providers in more integrated systems with collective accountability and greater risk-bearing capacity share in both savings and losses.

What does SIM mean for Medicaid?

Improving care and reducing costs in Medicaid are key goals of the SIM initiative. States are using multi-payer collaborations to leverage greater impacts from existing Medicaid innovations, such as Minnesota’s Medicaid ACOs and Maine’s Medicaid health homes, for both Medicaid and other payers. States are also capitalizing on other payers’ innovations, such as Medicare’s bundled payments for care improvement, to benefit Medicaid. The coordinated participation of multiple payers in state delivery system and payment reforms enhances the potential of these efforts to strengthen the role of primary care, foster more integrated care for high-need, high-cost beneficiaries, and drive improvement in quality and outcomes in Medicaid.

Although experience in the Model Testing states is still limited, three of the Model Testing states – Oregon, Maine, and Vermont – have begun to release quarterly progress reports on the implementation of their Innovation Plans.5 All three states have reported being on-track or surpassing their first-year goals.6 Furthermore, Oregon has reported that all its Coordinated Care Organizations (CCO) —the states ACOs – made progress on some measures of care improvement and that, overall, the CCOs slowed growth in per capita Medicaid spending.7 States have also faced challenges in designing, implementing, and testing their Innovation Plans. Securing payer and provider collaboration can be difficult, and building consensus on goals, methods, and metrics can be challenging. In addition, even within states, payers and providers have different capacities to innovate and collaborate, to which states must tailor their goals and strategies.8

The Innovation Center is expected to provide up to $730 million in Round Two SIM grants in Fall 2014. Up to $700 million will be used to fund up to 12 Model Testing awards and the remainder will fund up to 15 Model Design grants.9 Both the existing SIM programs and the new ones may benefit from another CMS effort, the recently launched Innovation Accelerator Program (IAP). The IAP, a collaboration involving CMS’ Center for Medicaid and CHIP Services, Innovation Center, Medicare-Medicaid Coordination Office, and other federal offices, was created to provide states with resources and technical assistance in areas such as data analytics and adoption of common quality metrics, and opportunities for state-to-state learning, to support Medicaid-focused delivery system and payment reforms, aligned with efforts in Medicare and the commercial market.10