This Visualizing Health Policy infographic spotlights national spending on prescription drugs and the public’s views on pharmaceutical prices. Prescription drug spending rose sharply in 2014, driven by growth in expenditures on specialty drugs, including medications to treat cancer and hepatitis C. Medicare’s spending on prescription pharmaceuticals also has risen, largely due to the addition of the Medicare prescription drug benefit in 2006: between 2004 and 2014, the program’s share of US drug expenditures increased from 2% of $193 billion to 29% percent of $298 billion. Prices for many specialty drugs are higher in the United States than other developed countries, and about 1 in 4 people in the United States who take prescription drugs report difficulty affording them. The majority of the public favors 4 policy actions to hold drug prices in check: requiring pharmaceutical companies to publicly release information on how they set prices; allowing Medicare to negotiate medication prices; limiting charges for high-cost drugs; and allowing people in the United States to buy drugs imported from Canada. 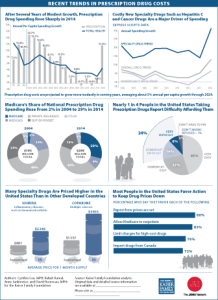 For more information about trends in prescription drug spending, go to the Peterson-Kaiser Health System Tracker.