With renewed discussion of the high cost of prescription drugs recently, the August Kaiser Health Tracking poll finds that most Americans feel that drug costs are unreasonable (72 percent) and that drug companies put profits before people (74 percent). At the same time, the public largely values the role prescription drug companies play, with most (62 percent) saying that prescription drugs developed in the past two decades have made the lives of people in the U.S. better, including about 4 in 10 (42 percent) who say a lot better. About half of Americans (54 percent) report currently taking prescription drugs, with most of them (72 percent) saying they are easy to afford, while about a quarter (24 percent) say they have a difficult time paying for their drugs; a share that rises among those with lower incomes (33 percent) or in worse health (43 percent). Large shares, across the partisan spectrum, have favorable views of several proposed actions to lower drug costs, including requiring drug companies to release information to the public on how they set their drug prices (86 percent) and allowing the federal government to negotiate with drug companies to get a lower price on medications for people on Medicare (83 percent), and majorities also say these strategies would be effective. Reflective in part of the perceived high costs of prescription drugs and focus on profits, about 4 in 10 (42 percent) Americans have a favorable view of drug companies, lower than the shares who feel favorably towards doctors (78 percent), food manufacturers (58 percent) and banks (58 percent).

When it comes to their views of the Affordable Care Act (ACA) this month, the American public remains divided in their opinion of the law; 44 percent say they have a favorable view and 41 percent say they have an unfavorable view. Nearly 3 in 10 (28 percent) say they want Congress to expand what the law does, an identical share (28 percent) want the law repealed, and the remainder fall in the middle by saying they want Congress to continue implementing the law as it is (22 percent) or scale it back (12 percent). Those who favor repeal are divided on whether the law should be replaced with a Republican-sponsored alternative or if it should be repealed and not replaced (12 percent and 11 percent of the public overall). In addition, even after being told that about 19 million people would become uninsured if the health care law were to be repealed, only 3 percent are swayed to say they no longer favor repealing the law.

The Public’s Views On Prescription Drugs

Most Say Costs Are Unreasonable And Higher Than In Other Countries

Due to a renewed focus on the issue of prescription drug costs amongst policymakers and the media, the August Kaiser Health Tracking Poll expands upon the April and June Kaiser Health Tracking Polls that touched on the issue. As in June, this month a large majority of the public (72 percent) view the cost of prescription drugs as unreasonable. Those currently taking prescription drugs are somewhat more likely to say drug costs are unreasonable (77 percent), but still 66 percent of those not currently taking medications say they are unreasonable. In addition, about three quarters of the public (74 percent) think people in the U.S. pay higher prices than people in Canada, Mexico and Western Europe pay for the same prescription drug, a share that is similar across those taking medications and those who are not. 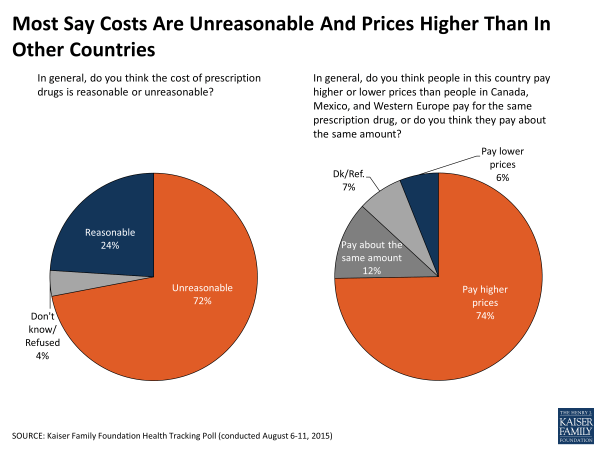 Views On Ways To Keep Drug Costs Down

When presented with policy options intended to help keep the cost of prescription drugs down, the public is supportive of a number of different actions and a majority feels each would be an effective option. Topping the list is requiring drug companies to release information to the public on how they set their drug prices, with more than 8 in 10 Americans reporting a favorable view (86 percent) and saying it would be effective (81 percent). Eight in 10 (83 percent) also favorably view allowing the federal government to negotiate with drug companies to get a lower price on medications for people on Medicare, while 72 percent view this as effective. In addition, more than 7 in 10 favor limiting the amount drug companies can charge for high-cost drugs for illnesses like hepatitis or cancer (76 percent) and allowing Americans to buy prescription drugs imported from Canada (72 percent) and similar shares think these would be effective actions to help lower drug prices (77 percent and 74 percent, respectively). Lower on the list is encouraging people to buy lower cost drugs by requiring them to pay a higher share of the cost if they choose a similar, but higher cost version of the drug (48 percent favorable). However, even more (57 percent) say this would be effective. 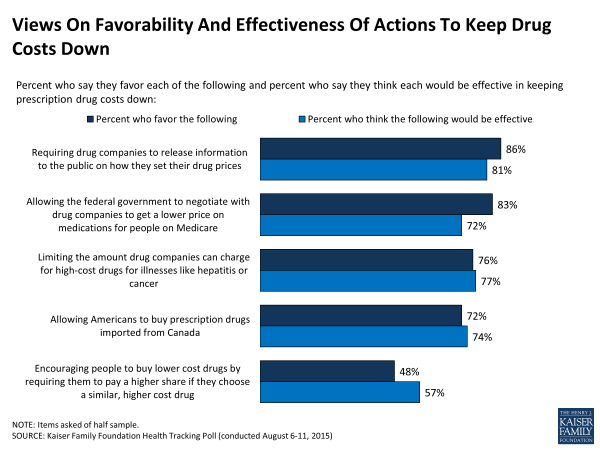 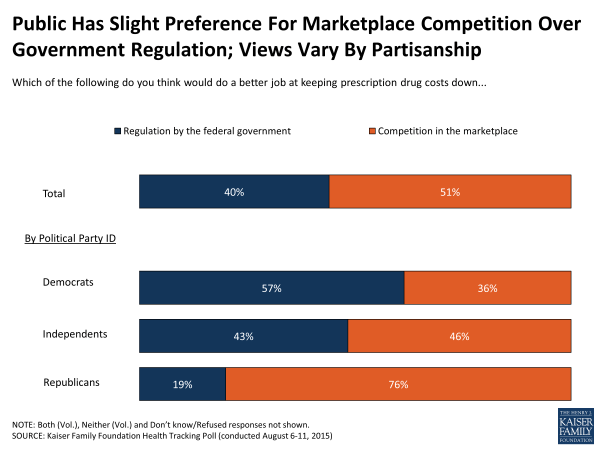 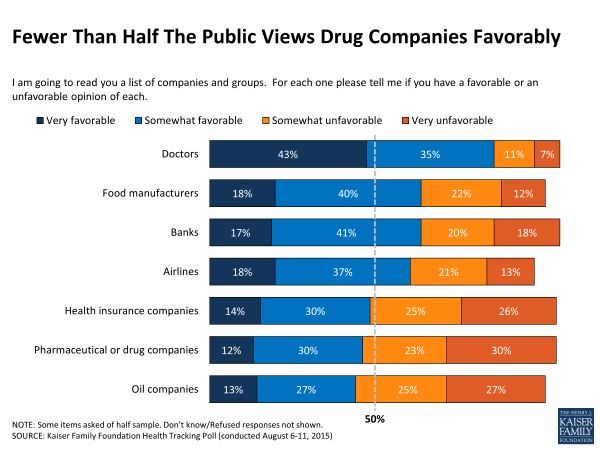 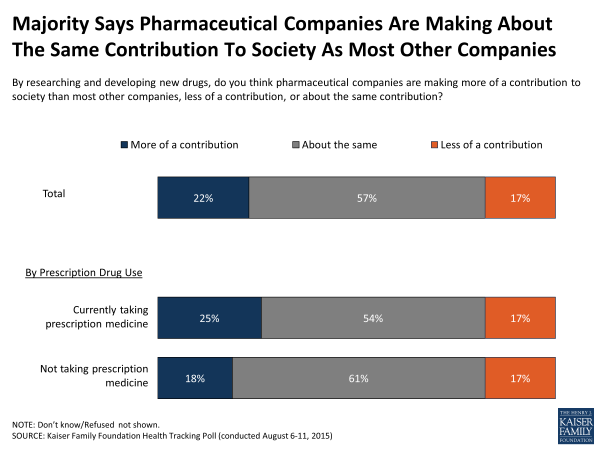 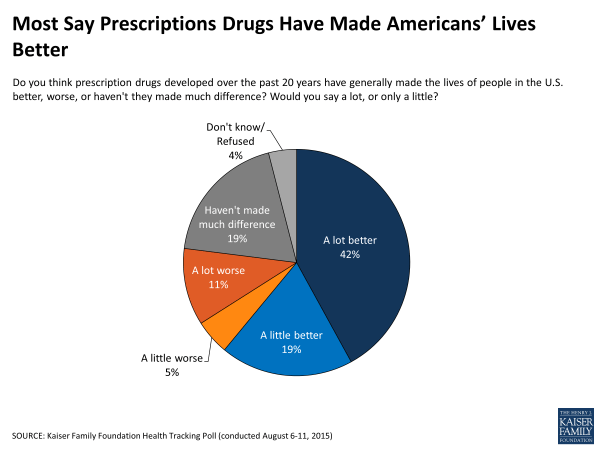 Many Say Drug Companies Are Focused Too Much On Profits

While many feel pharmaceuticals have improved Americans’ lives, over 7 in 10 Americans (73 percent) say drug companies make too much profit, while about 2 in 10 (21 percent) say they make about the right amount of profit and very few say they do not make enough profit (1 percent). Those who feel the cost of prescription drugs is unreasonable are much more likely to say companies make too much profit than those who say costs are reasonable (83 percent vs. 46 percent). 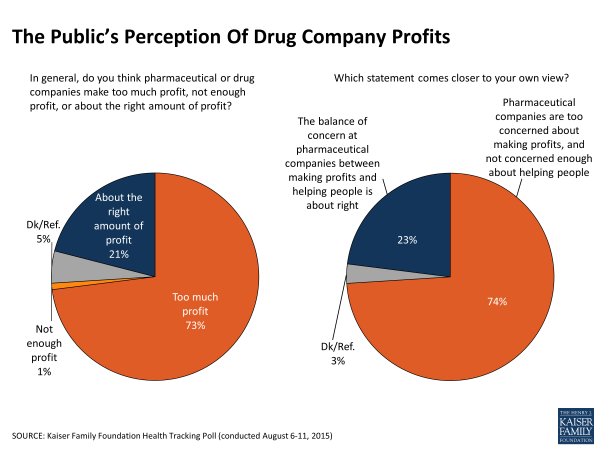 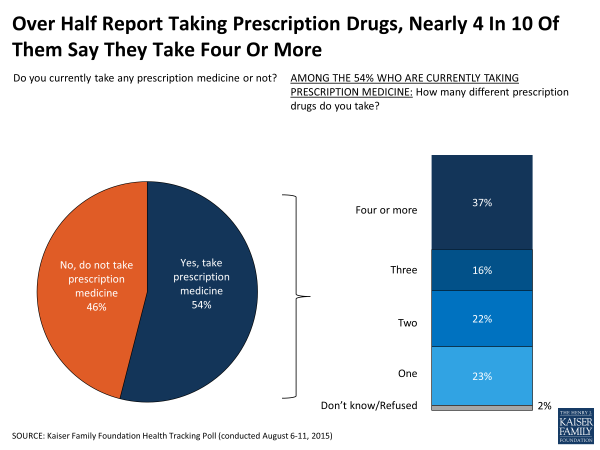 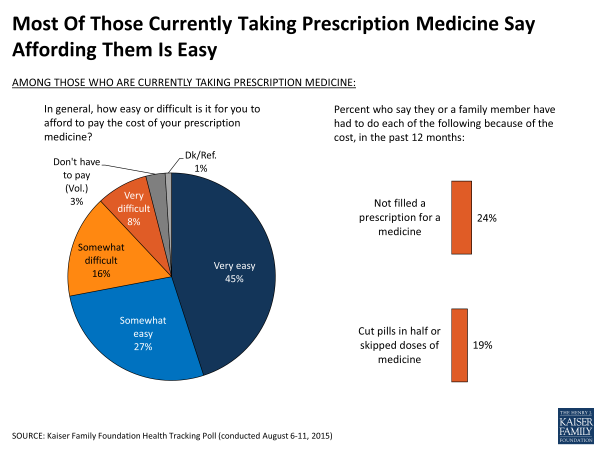 Those who report that they are in fair or poor health and those who say they are currently taking 4 or more prescription drugs are more likely than their counterparts to say affording their medicine is difficult (43 percent vs. 17 percent and 38 percent vs. 16 percent, respectively).  These groups are also more likely than others to say that they have not filled a prescription or cut pills in half or skipped doses in the past 12 months due to cost (Table 2). 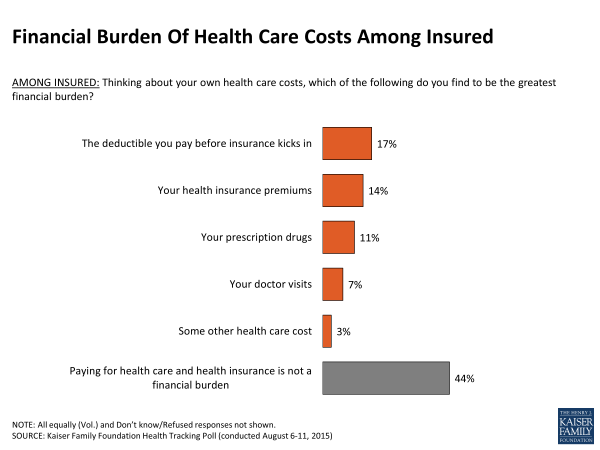 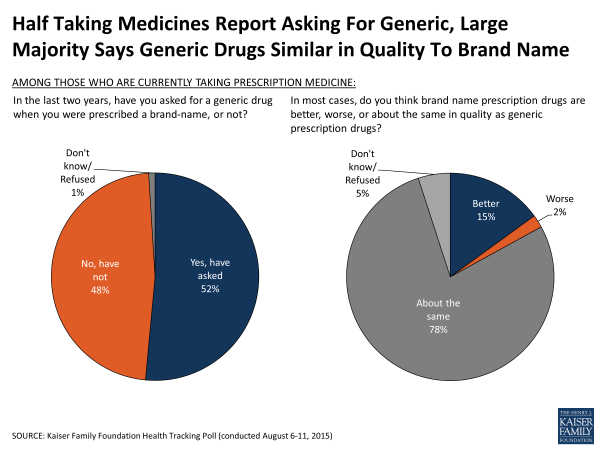 Views Of The Affordable Care Act 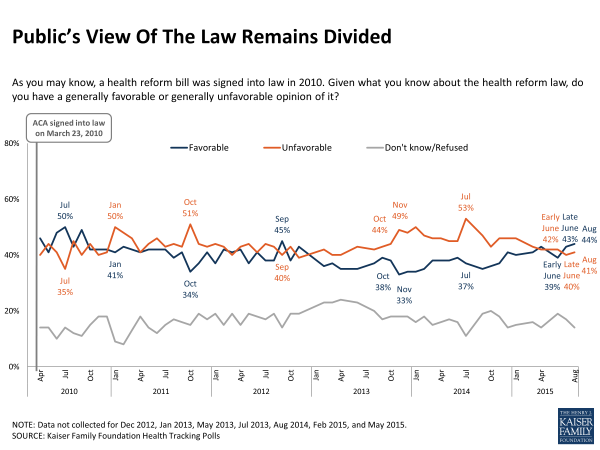 Next Steps For The ACA 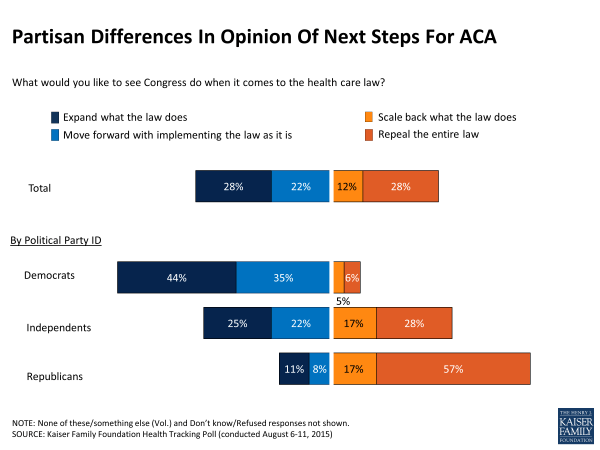 Those who want Congress to repeal the law in its entirety are split about what should happen next. Twelve percent say they think Congress should replace the law with a Republican-sponsored alternative, while 11 percent say they would like the law repealed and not replaced. 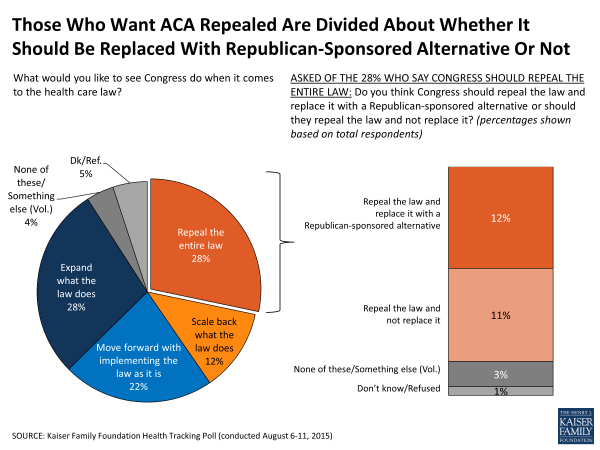 Although those who want the law repealed disagree about what Congress should do, they are unified in their unwavering desire for repeal. After being told that about 19 million people would become uninsured if the health care law were to be repealed, only 3 percent are swayed to say they no longer favor repealing the law. 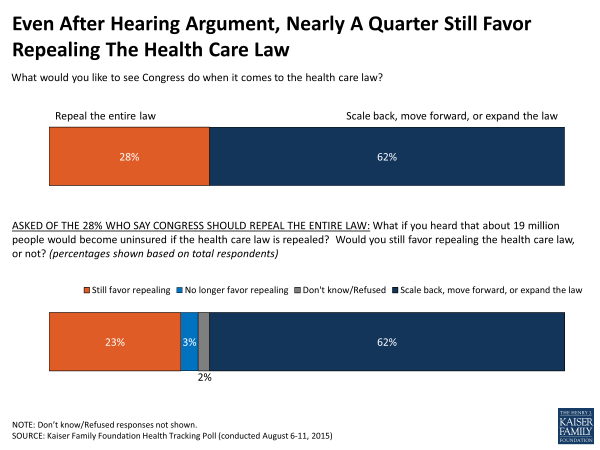 In the wake of the first Republican primary debate that took place the first week of August and the first night this survey was in the field, nearly 7 in 10 Americans report “very” or “fairly” closely following news coverage of the 2016 presidential campaigns (69 percent), significantly more than the slim majority that said the same in the last two Kaiser Health Policy New Index reports. Perhaps not surprisingly given the recent debate, Republicans (78 percent) are more likely to say they have been following the presidential campaigns closely than Democrats (71 percent) or independents (66 percent). About two thirds of the public (66 percent) report following another national headline, coverage of the four Marines killed in a shooting in Chattanooga, Tennessee, as well as the international headline about the recent agreement on Iran’s nuclear program between Iran, the United States, and other nations (63 percent). More than half followed other national news stories such as the controversy about Planned Parenthood (57 percent) and the death of an African American woman, Sandra Bland, in a Texas jail (54 percent).

Health stories fall to the bottom of the public’s radar this month, with just 3 in 10 (30 percent) saying they closely followed profits made by insurance companies, and about 2 in 10 say they closely followed the merger between health insurance companies Anthem and Cigna (22 percent), the release of Medicare’s annual financial report (20 percent), or the Food and Drug Administration’s (FDA) approval of an expensive new cholesterol-lowering drug (18 percent). Those who say they are currently taking prescription medicine are slightly more likely to say they followed news of the FDA’s approval of the new cholesterol-lowering drug closely than those who say they are not taking any prescription drugs, however these shares are small among both groups (21 percent vs. 13 percent, respectively). 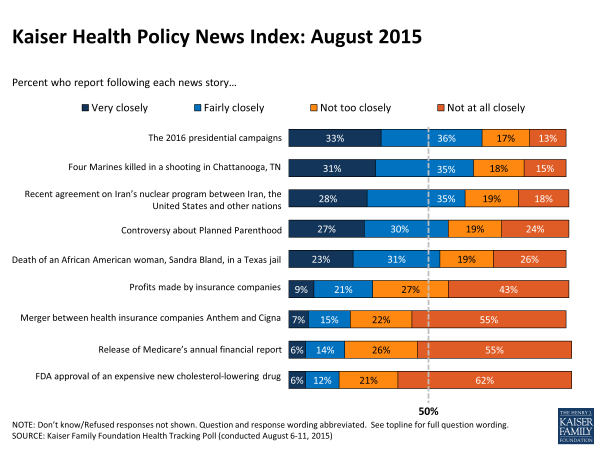 The Health Care Law In The Media 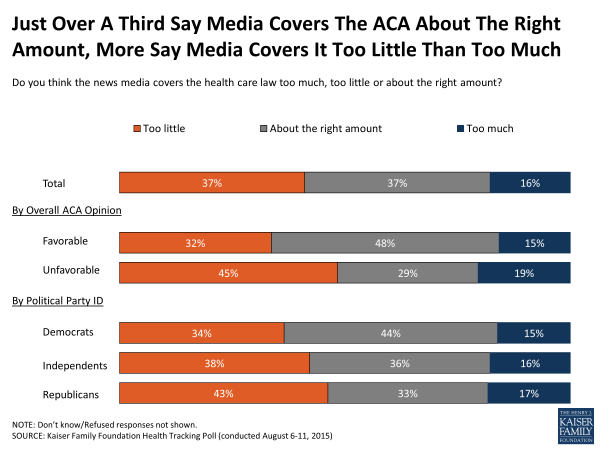